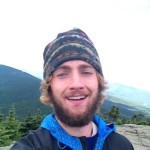 Bill Irwin, who in 1990 became the first and only blind person to thru-hike the Appalachian Trail without human assistance, passed away last Saturday morning.

Irwin, at 50 years old, started hiking north from Springer Mt. with his dog Orient on March 8, 1990 and reached Baxter State park on November 21, 1990. Unlike most other hikers, Irwin did not use any guidebooks or maps during his hike. Instead, Irwin used pre-made audio cassette tapes containing information on the trail such as mileage, shelter locations, hostels, town locations, and other things he might have needed. These tapes were placed in the mail drops he received throughout trail. During his hike, Irwin had to overcome several obstacles, besides his visual impairment, such as rain, snow, taking care of a dog, a broken rib, and all of the other problems any thru-hiker has to deal with.

After his hike, Irwin wrote a book titled “Blind Courage.” Irwin also worked as a motivation speaker and emphasized striving for excellence, leading by example, dealing with disabilities, and stress management. In 1990, Irwin received the Presidents sports award presented by President George H. W. Bush. He also received the Outstanding Achievement Award by the Civil Conservation Corp. of Maine, Chapter 3.

You can view Irwin’s website by clicking here. Bill was scheduled to speak at First Babtist Church in Salisbury, North Carolina today.

Here’s to the life of an Appalachian Trail hero…

My name is Cole, my friends call me Bear, my trail names (yes, I had two trail names) were Poptart and Balto. In 2013, at 19 years old, I completed a northbound thru-hike and fell in love with life, the outdoors, and adventure. Check out my website - www.beingcolbert.com