Bob Peoples’ Kincora Hiking Hostel experience is truly refreshing and a must for an Appalachian Trail through hiker seeking to get the most out of their journey. 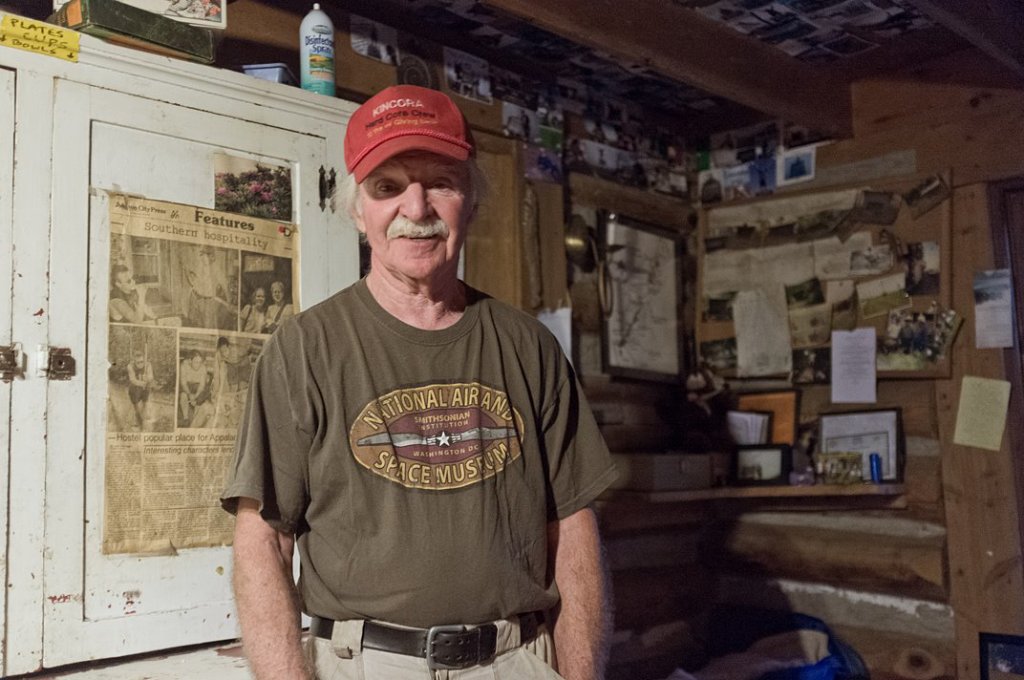 A portrait of Bob Peoples standing inside of Kincora Hiking Hostel circa 2013. (Photo courtesy of Bill Garlinghouse)

It’s very apparent upon arrival that Peoples is after something more important than money. 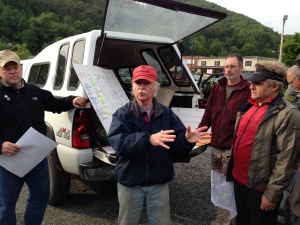 One stay at his Kincora Hiking Hostel will more than likely leave any guest wanting to do more for the hiking community.

Peoples and his late wife Pat moved to Hampton, TN in 1995 and opened the hostel in 1997. That’s also when Peoples began to get more involved in the Eastman Hiking Club, which maintains about 133 miles of the AT from Spivey Gap to the VA/TN border.

Aircraft maintenance was Peoples’ career before he transitioned into owning a hostel and maintaining trails in Carter County.

“It’s task accomplishment,” said Peoples, who is a Massachusetts native. “For hikers, it’s to see the mountain, see me on top of the mountain. Where some people see a mess, I see a trail there. Same thing. There’s a tremendous feeling of accomplishment.”

It’s common for a few Chuck Norris-style jokes to be thrown out when Peoples’ name is mentioned. Since it’s only natural to be curious, here are a couple:

There are more jokes like this written at the AT’s Vandeventer Shelter about 15 miles north of Peoples’ place. For those with access, there was also a recent post on the Appalachian Trail Class of 2014 Facebook group asking for hikers to comment with their favorite joke.

Another form of humor surrounds Peoples’ knack for always building switchbacks, which opens up a conversation about his true passion — trail maintenance. It’s been said that every time Peoples builds a switchback, an angel gets its wings.

“It’s really to stop erosion,” Peoples said. “That’s what the switchbacks are about.” 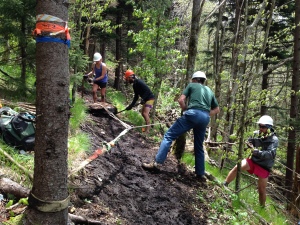 A few through hikers and a member of the Eastman Hiking Club work a large rock into place during the 2014 Damascus Hard Core trail maintenance event. (Photo by Kayla Carter)

Peoples wants hikers to commit to giving back and paying it forward to all future generations of hikers. He is also passionate about conserving the land some hikers may recreationally take for granted.

“We’re creating the next generation of stewards,” Peoples said.

However, this is the last year through hikers at Trail Days in Damascus will be able to hitch a ride back to Hampton to participate in the annual Hard Core trail maintenance program. Eastman Hiking Club kicked off Hard Core in 2000, Peoples said.

“We’ve run out of projects for that many people,” he said.

Since nearly 100 hikers per year have been vying for a chance to participate in Damascus Hard Core over the past few years, their long-term goal was met much more quickly than expected.

“The shirts this year will have the AT symbol on it and will say, ’15 years of giving back,'” Peoples said. “They will also say, ‘Veni, Vidi, Vici’ on them. It’s a Latin phrase that means, ‘I came, I saw, I conquered.'”

This past year, Damascus Hard Core had 68 hikers sign up within the first two hours of Trail Days, according to Carl Fritz, Eastman Hiking Club’s Appalachian Trail projects coordinator. The 2014 Hard Core was split into two groups. One crew built switchbacks on Roan Mountain starting at Ash Gap while the other completed some very intricate rock work at Little Rock Knob.

“3600 feet of difficult trail was built in two days,” he reported online at tehcc.org. “And the Appalachian Trail is on a much better grade that is more resistant to erosion.”

Peoples said current through hikers and some former through hikers will join together to rehabilitate areas on Hump Mountain and Doll Flats this year. One of the best parts, Peoples said, is getting to paint a white blaze. 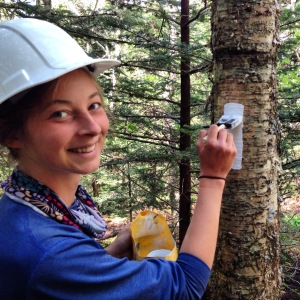 Blossom paints a white blaze after helping build part of the new trail on Roan Mountain with the Hard Core crew. (Photo by Botany)

“Most hikers won’t look at the trail the same way again,” he said.

The program traditionally starts on Sunday of Trail Days and concludes on Monday afternoon.

No matter where hikers have made it to on their grand quest, returning through hikers and volunteers are able to shuttle hikers back to continue their trek.

Peoples asks hikers for a mere $5 donation for services provided by his hostel. There’s a kitchen inside the main hostel and an area for laundry and showers. No dogs are allowed and there is a three night limit. Peoples also holds packages for hikers who prefer mail drops. Hikers may choose to stay in either bunkhouse and maybe, if asked nicely, Peoples will let hikers stay in the quaint and hidden treehouse on his property. 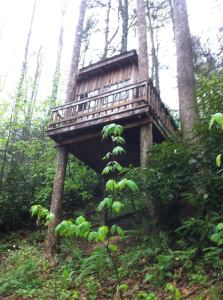 While the hostel is already only meant for current section and through hikers, Peoples said he may try to go under the radar within the next few years.

“The people who know it is here are welcome to stay,” Peoples said. “But there are other trails that I would like to do.”

As an avid international hiker, one of the pilgrimages Peoples has completed is the Camino de Santiago. To name only a few places, he has hiked in Scotland, Wales, Panama and Peru. He also plans to complete The Jesus Trail in Israel soon.

The Chinese symbol meaning journey that hangs inside the hostel pretty much sums it all up for Peoples.

“Whatever you learn on the white blazes, you can use for the rest of the journey — life,” Peoples said. “On the trail, you learn a lot about yourself and other people. Some of the stuff you learn about yourself isn’t very good, but you learn to handle it and make better choices.”

*This joke may be true when referring to the Chuck Norris of Laughing Heart in Hot Springs, NC.