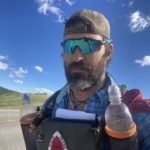 The saying, “embrace the brutality”, never resonated much with me when I first started thinking about a CDT attempt last year while on the PCT. I got the bandana, researched my first resupply or two, replaced gear as necessary and began to prepare myself mentally.
My flight to Kalispell Montana was on the morning of June 26th. After a layover in Colorado I had finally arrived in Big Sky country. I walked to a local dispensary to gather supplies and was offered a ride into Whitefish almost immediately. Pizza, Beer and stealth camping ensued. The following morning found me on the train to East Glacier Village, followed by a ride from Isaac who is running a much needed transportation business to the trailheads and beyond.  I officially touched the border and started my SOBO thru hike from Chief Mountain inside Glacier National Park at 1 pm. 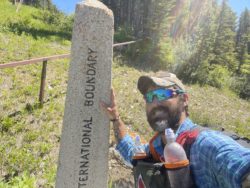 In order to make the best time possible, I opted to hike the 27 miles to Many Glacier ranger station straight through the night. Red Gap Pass was a snowy introduction to the trail. I arrived at the station by 5 am, putting me first in line for a permit for the rest of the Park. When the Ranger eventually made his appearance at 7, I was promptly informed that Piegan pass was unsafe and the Cut Bank wilderness area was closed due to carcass and bear activity. Prior to the trip I had decided to forgo my ice axe. With these variables in mind, I jumped onto hwy. 89 and decided to walk the blacktop. Many beautiful sites, a dangerous road walk and a Native Blackfoot campground later found me at the end of section 1 and back at East Glacier Village. I checked into a local hostel and got re provisioned and clean.
I began my trek into the beautiful Bob Marshall Wilderness the following morning, July 1st., after a final breakfast burrito and a drip coffee. I was well supplied and overconfident. The first stretch of trail is overgrown, but no blowdowns. Then comes 6 miles of hell, with barely 5 free steps in-between giant piles of criss crossed trees. My pace slowed to under 1mph and the blood flowed from my legs. I had read about the Spotted Bear alternate, but it  appeared to be much more challenging than the red line so I initially dismissed the idea. After dinner, losing my lighter and making a wrong turn, I finally stopped and realized my error. I was already 2 miles in on the alternate and decided to go with it. There were dangerous water crossings  fueled by snow melt. Switchback Pass was completely snowed in and I faced a near vertical snow ascent to the top. Really could have used my axe… The rest of the alternate was overgrown, soaked and full of blowdowns.
The following days found me traversing the snowy base of the Chinese wall, lakes and following the remaining well- cleared trail to the Bench Mark trail head. I am currently resupplied and awaiting a ride back to trail from Augusta Montana, my first off trail hitch and town. I was able to shower and eat copious amounts of red meat. I feel rested and well other than the slight bout of tendonitis I’m coping with in my left foot. Looking forward to seeing what else Montana has in store!

Hello all. My name is Wanderer, aka Jeb. I grew up in a military family and travelled the world as a kid. I am a father, husband, U.S Army Infantry Combat Veteran and an avid outdoorsman. Hiking has provided an avenue of healing for me that I have been unable to find elsewhere. I thru-hiked the Pinhoti trail in 2016 and I did a flip flop thru-hike of Appalachian Trail in 2020. Benton Mackaye Trail Feb. 2021, PCT 2021, and currently 230 miles into a Southbound thru hike of the CDT