Chinook Trail – Meeting Up With The PCT From Hood River, OR, To Lost Lake Resort

I knew this day would be the most brutal of the entire Chinook Trail journey. Over 5,000 feet of vertical from the Columbia River, up Mount Defiance, and past it to Rainy Lake for the night. I kicked off the day with a great breakfast at Broder Ost, a Scandinavian restaurant with tasty omelettes served in square cast iron skillets. I needed to fuel up for a big day. The way out of Hood River was mainly on lightly traveled neighborhood streets, but once out of town I had to walk on the narrow shoulder of a few 50 mph roads—not a great time. Once I made it to Riordan Hill Drive the climbing began—pretty steep in sections, but paved for the first few miles. At Family Man Mountain Bike Park the pavement gave way to gravel forest roads. 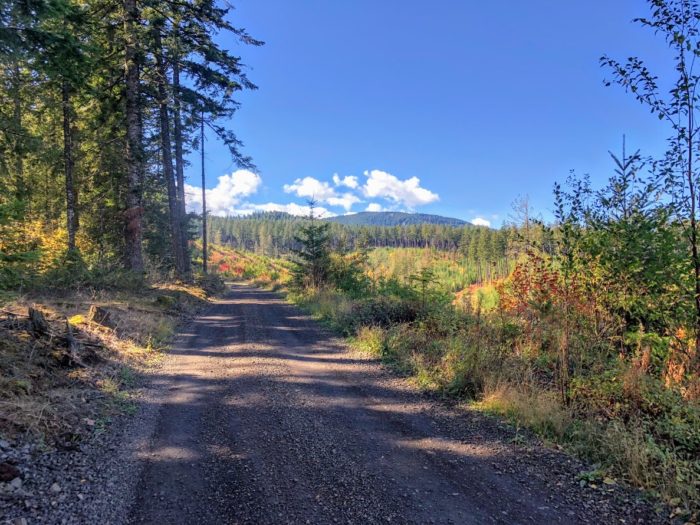 Decision Time – Up and Over Mount Defiance, or Skip It

This section was a little tricky—it was uphill, but between a somewhat complex network of forest roads, and dozens of mountain biking trails, it was easy to get lost and I took a couple of wrong turns. Thankfully, GPS and the Gaia app bailed me out each time. Once I reached the 4,000-foot level I had a choice to make—go up and over Mount Defiance, or stay at roughly 4,000 feet and traverse it. Knowing the views aren’t great up there, and having limited daylight left, I opted for the traverse. It was at this point that I reached 100 miles of hiking for the trip. 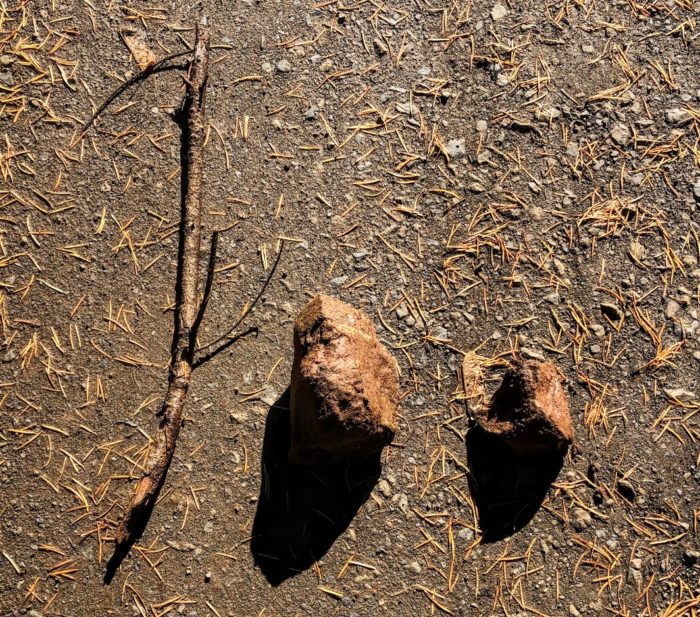 There weren’t many people up there, but I did pass a few mountain bikers, and someone taking his dogs for a “walk.” The driver was in his truck, going up the forest road, and his dogs were tailing behind. I reached the junction for the Rainy Lake Trail—finally, after a long day of road walking, first on pavement, and then on gravel, I would be on actual trail. It was a nice, fairly level trail that didn’t seem to be used too often. Found a pretty little waterfall and filled up my water bottles. Met up with a wildlife surveyor—funny to see him bundled up from head to toe while I was sweating in a short sleeve hiking shirt (it was probably about 45 degrees at this point). It was getting dark, but I reached camp at about 6:30 and had my pick of four sites and chose the one closest to the cute little A-frame bathroom. 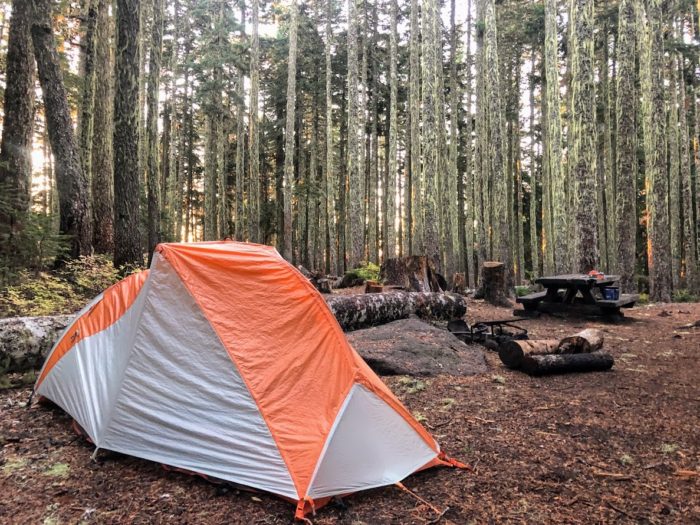 Rainy Lake Camp to Lost Lake Resort on the PCT

This was supposed to be an easy day—Gaia said it’d be 12-14 miles, and a hiker I met near Wahtum Lake said from there it was about seven miles. In the end, it was a 20+ mile day—oh well, it was the most amazing day of hiking as well so I didn’t care. Had the usual for breakfast—a Via coffee and oatmeal, then got underway at 8:30. I thought I’d be road walking to Wahtum Lake, but my campsite was right next to a trailhead for Wahtum Lake. I think what I saw on Gaia as a road is actually a trail. In any case, one must always choose the trail, so that’s the way I went, and made sure to verify with Gaia that I was going in the right direction (I was). 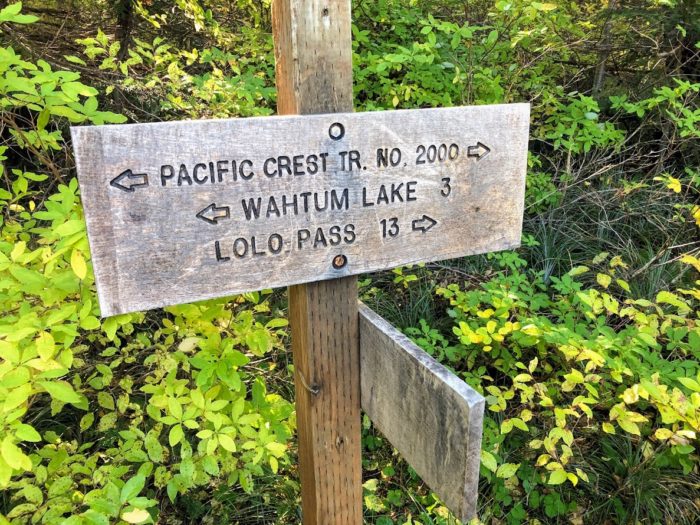 It was cool to see Mount Hood getting closer and closer with each step. Once I reached Wahtum Lake I rested a bit, had a snack, then joined up with the PCT, which would be under my feet for the next 40 miles or so. After an initial uphill stretch, the trail flattened out and I was able to reach 4 mph for quite a way. The highlight of the day was reaching an open area below the summit of Indian Mountain. It was a clear day and I could see Mount St. Helens, Mount Rainier, and Mount Adams in the distance, with wide swaths of burnt trees from last year’s horrific fires. I took a ton of photos, gulped down some water, and continued on.

Met a PCT NOBO hiker, who I believe was from Germany, and talked to him for a few minutes. Unfortunately, he wasn’t going to make it—not because of cold weather and snow up north (although that would have been an issue), but his visa was expiring soon. By this point I was only about 12 miles from Mount Hood as the crow flies, but for me it would be another 25 miles or so of hiking. I pushed hard to make it to Lost Lake Resort before they closed—I didn’t have a reservation, but more importantly, I really wanted a beer. The general store closed at 5 p.m., and by 4 p.m. I still had three downhill miles to go. It would be tight! On my way down I met a couple of day hikers who were staying at the resort, who said there was a temporary sign at the store that said they closed at 4. I kept pushing, hoping today it would be open at 5, but no such luck, and I actually didn’t make it there until 5:15 anyway. 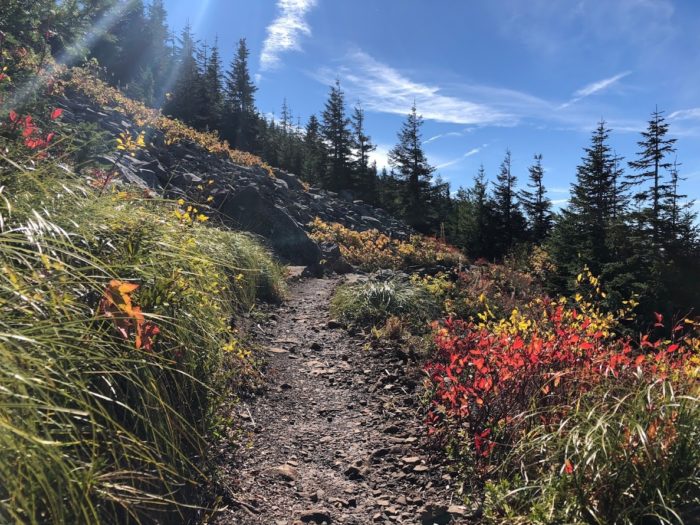 I met a worker at the store who was closing up, and he gave me the scoop on where to camp, which helped. Unfortunately, no amount of persuasion would convince him to sell me a beer, but the thought of setting up camp, having a nice meal, and relaxing were enough for me. Had a Good To Go mushroom risotto for the first time and it was awesome. I love that company! It was getting cold so I popped into the tent, snuggled up in my quilt, and read for a bit before calling it a night.

On a side note, I’m not sure how many PCTers take the detour down to Lost Lake Resort, but it’s debatable whether it’s worth it. It’s about 800 feet below the PCT, and about three miles in each direction. Plus, there are some nice-looking campsites at the junction of the PCT and the Lost Lake Trail. I didn’t need to resupply, and I got there after the general store closed, so I really didn’t need to do the extra six miles of round-trip hiking. Still, it’s a beautiful lake, and the hot coffee and cup of Life cereal and milk hit the spot in the morning. 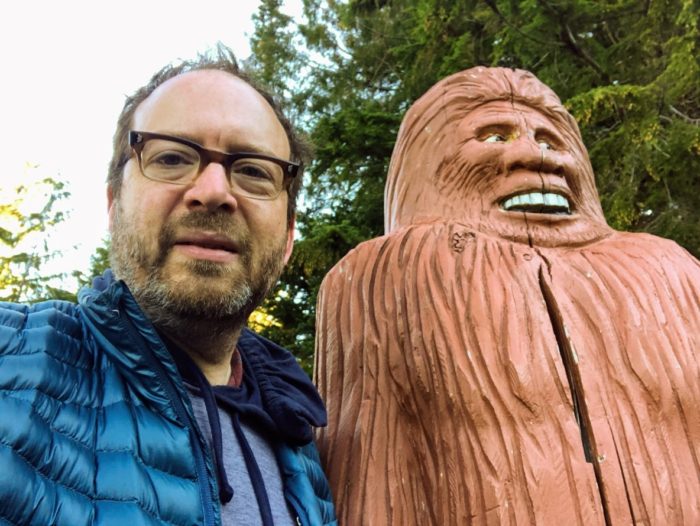