I left Cluxewe early in the morning in order to head north along the coast to Port Hardy. But, because the river was only ford-able at low tide which only came around at midday, I had to detour behind the beach on a back road for a while before rejoining with the trail.

On my detour, a little cub attempted to cross the road not too far in front of me, in the dim grey of the morning. It turned around and scuttled back into the blackness of the woods in the direction it came, and I picked up the pace to get out of the area before I could see mama – or, more importantly, before she could see me.

I rejoined with the two-track trail from there, and soon enough it spit me out on the beach. The orange light of the sunrise filtered underneath the low-lying blanket of dark clouds, making the bleached beach wood and the shiny rocks a rosy-warm glow.

As the tide fell, more and more of the gentle slope of the beach was exposed. Though the trail meandered through the forest just a few meters behind the wall of trees to my left, I frequently chose to jump out from the green and walk on the flat rock shelves and firm sand instead. 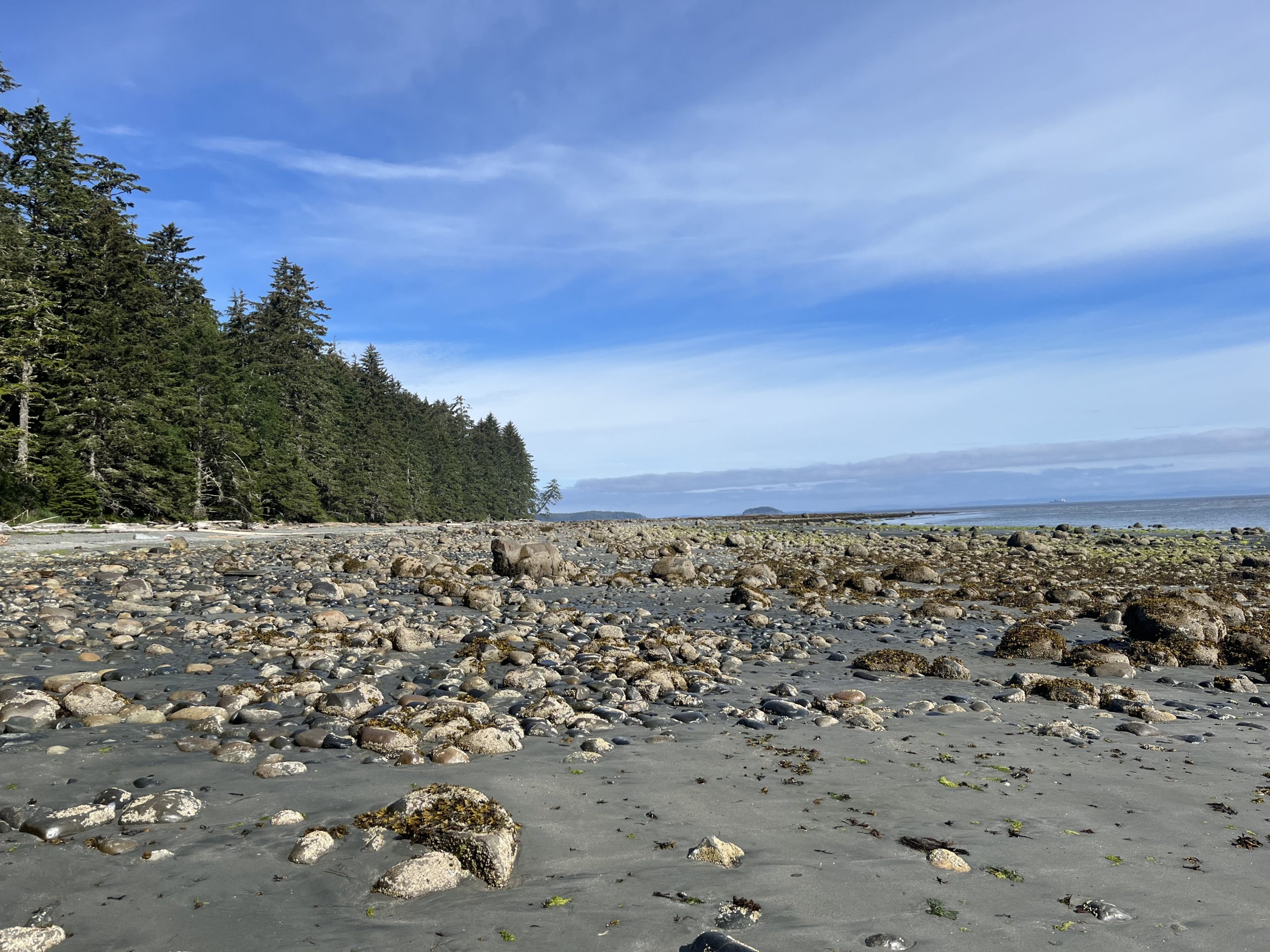 Unfortunately, I think this alternate route led me to bypass one of the major landmarks of this section of the trail that I was actually looking forward to checking out – the old ruins of the Suquash Mine, BC’s first coal mine. In the early 20th century, it mainly employed members of the Kwakiutl First Nation and helped to feed a steam-powered boat owned by the Hudson’s Bay Company that operated in the area. By the time I realized I must have missed it, buried in the trees while I was sand-walking, it was a few kilometres back and I was not about to turn around. Oh well… maybe on my next trip up here.

Back on the beach, I hopped across some cool rock formations. I popped the air-filled bladders of seaweeds with my steps. I amusedly watched little crabs run for cover under my shadow. 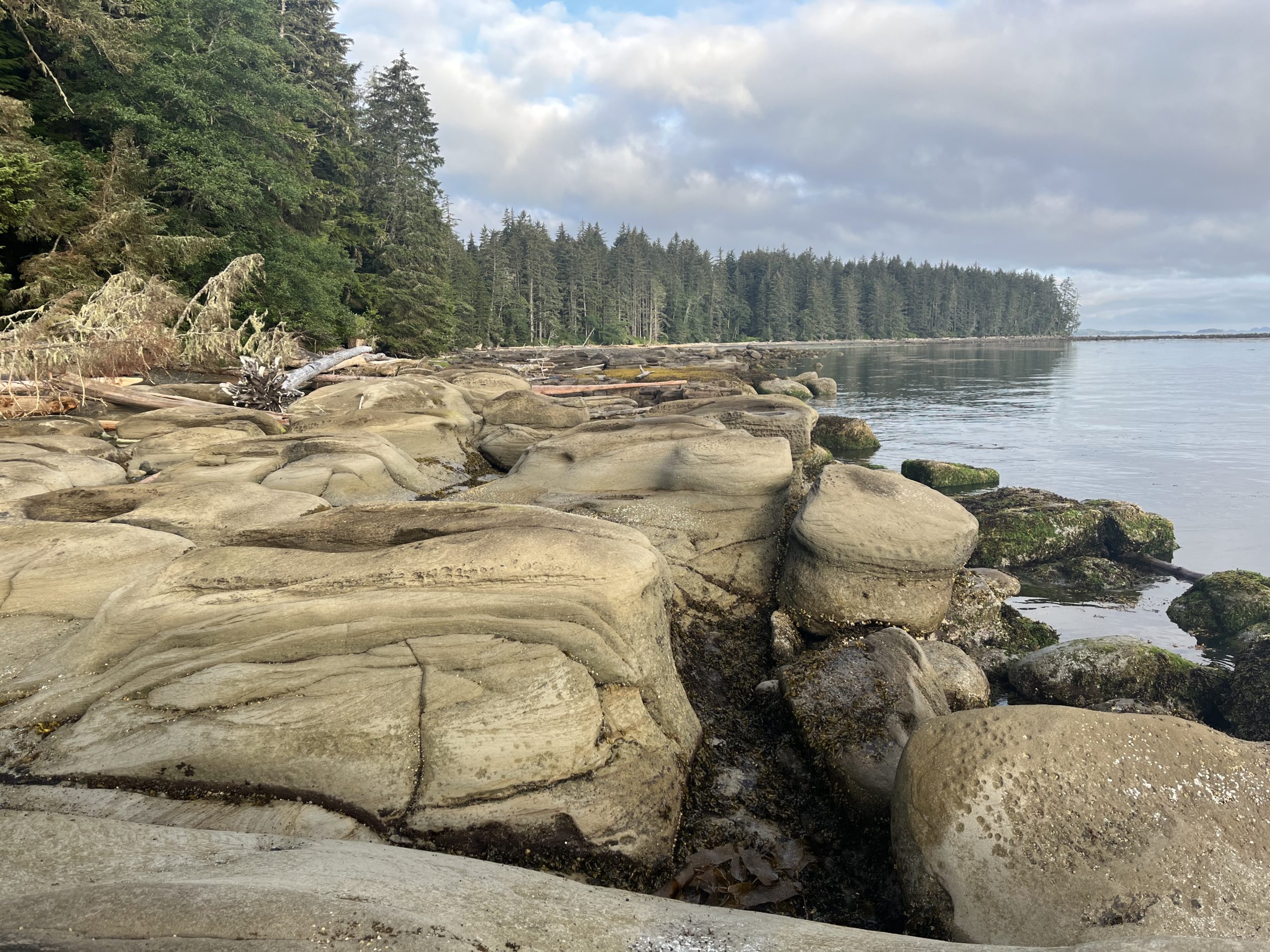 At the mouth of the Keogh River, I saw a bear on the beach rooting around on the shore. 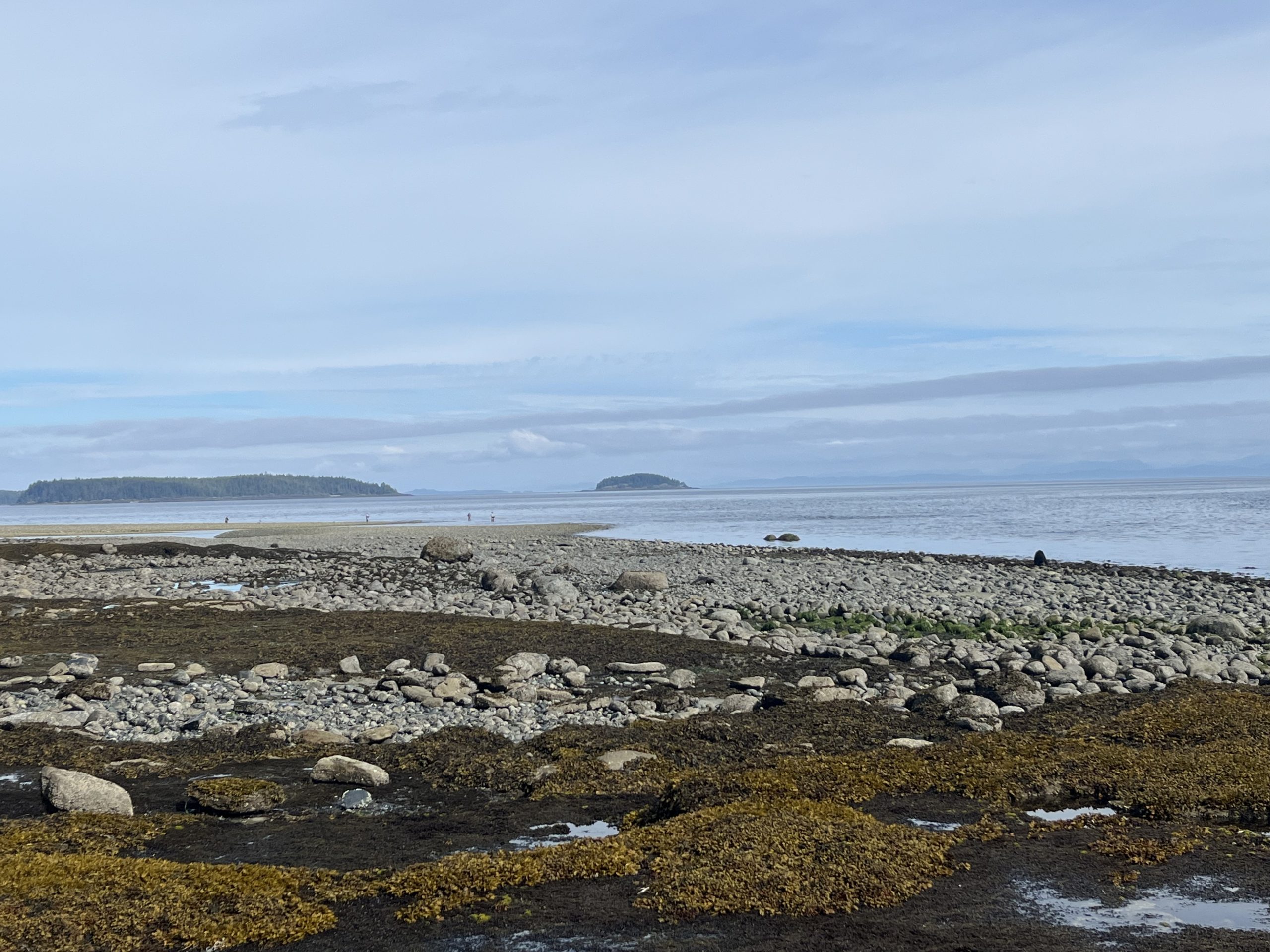 Fishermen at the mouth of the river on left, bear on right

I met a lady nearby touting a huge fancy camera, and learned that she had been visiting this area to observe the bears for over 20 years. She had names for all of them, and spoke of them so affectionately. Excitedly, she reported that she had just seen Georgina, a 13-year-old bear, with her first little cub in the river not five minutes before I arrived. (If you want to see some amazing wildlife photography, check out Melanie’s work!). It really touched me, seeing this kind of love and admiration expressed for these animals.

Past the airport, I turned off the beach, and one short overland section later, I arrived at the Quatse River Estuary. Though it smelled a little dank, I understood that the brackish and unpleasant-looking waters were important habitat for many different species, including all seven species of Pacific salmon found in this area. 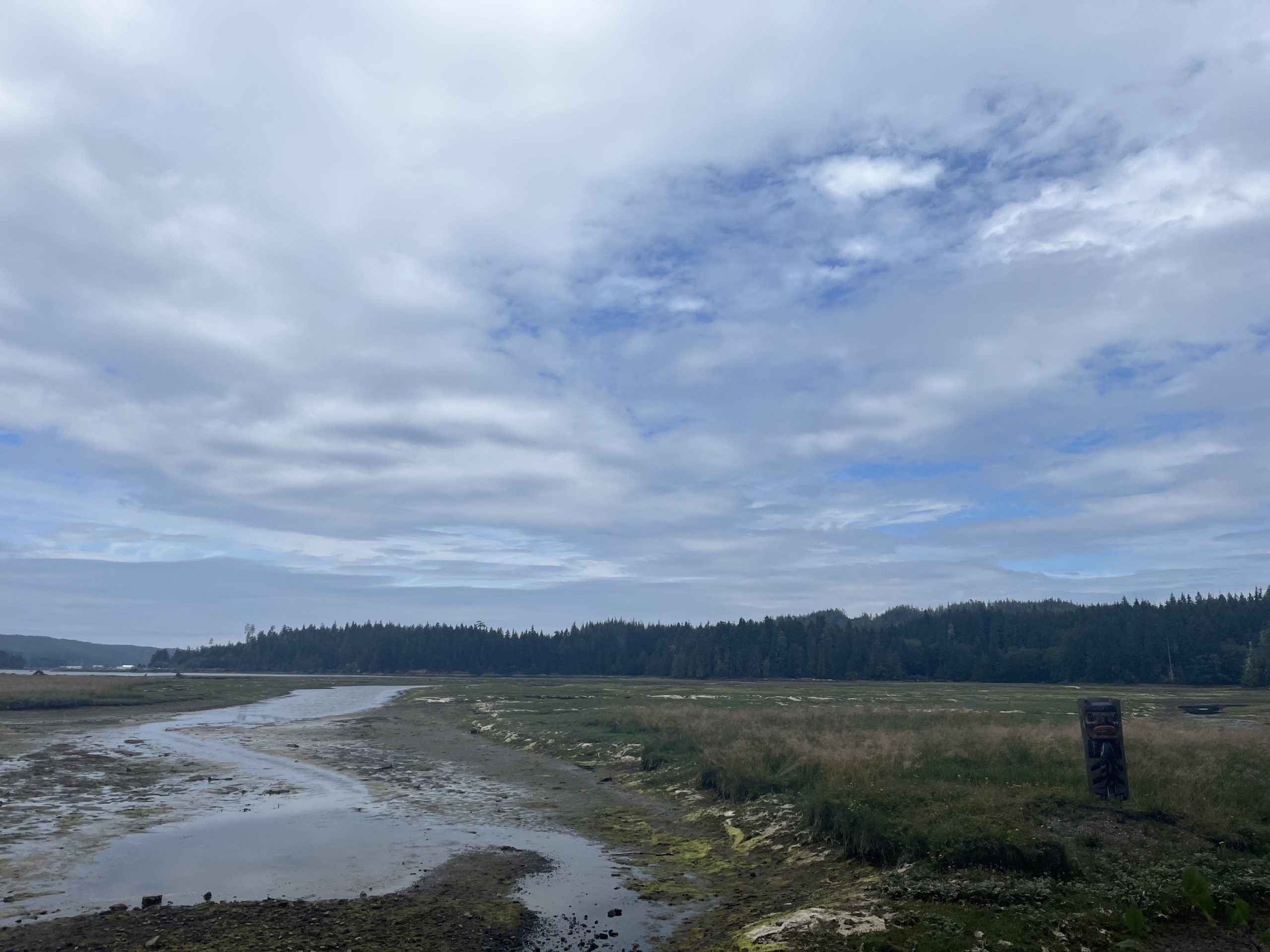 Quatse River estuary. Check out the totem on the right!

Arriving in Port Hardy, I booked in to the North Coast Trail Hostel for the night, showered, and made my way to the pub for some fish and chips. By this time it had started to rain sideways, and I was thankful for the warm and somewhat rowdy interior of the restaurant to distract me a little from the weather. I hoped that it wouldn’t be coming down too hard on me during walking hours in the next few days. But, I didn’t expect much – I was in an area well-known for its miserable weather.

I picked up a guide to the North Coast Trail (NCT) from the hostel bookshelf and enthusiastically dove into it. I had two days of logging road walking to get to the start of this well-trafficked trail that was a part of Cape Scott Provincial park – however, most hikers that adventure on the NCT choose to get a water taxi to its eastern terminus instead. I was really excited to experience this next section of trail, with its beaches and its history – the NCT was actually partially created out of old settler’s travel routes from when a group of Danes tried (and failed) to establish themselves in the area. And, it would be the first time I would actually get to see other hikers on trail! Even this far in, I’ve literally only seen 4 other day hikers on the Alberni Inlet, and 3 day hikers on the commuter trail just outside Port Hardy. I was interested to see how the proximity of other travellers-by-foot was going to change my experience of the trail.

But First, Death to My Feet

I left late in the afternoon of day 35 to take the backroads to Georgie Lake. I was planning to split the punishing road kilometres into two days to make it easier on my feet. There’s something about the flatness, and the hardness, and the continual striking of your heels in exactly the same spots, that is more painful than even climbing mountains.

I sat with the peaceful stillness of the lake as darkness slowly fell, glad to have stopped to rest at such a serene place. 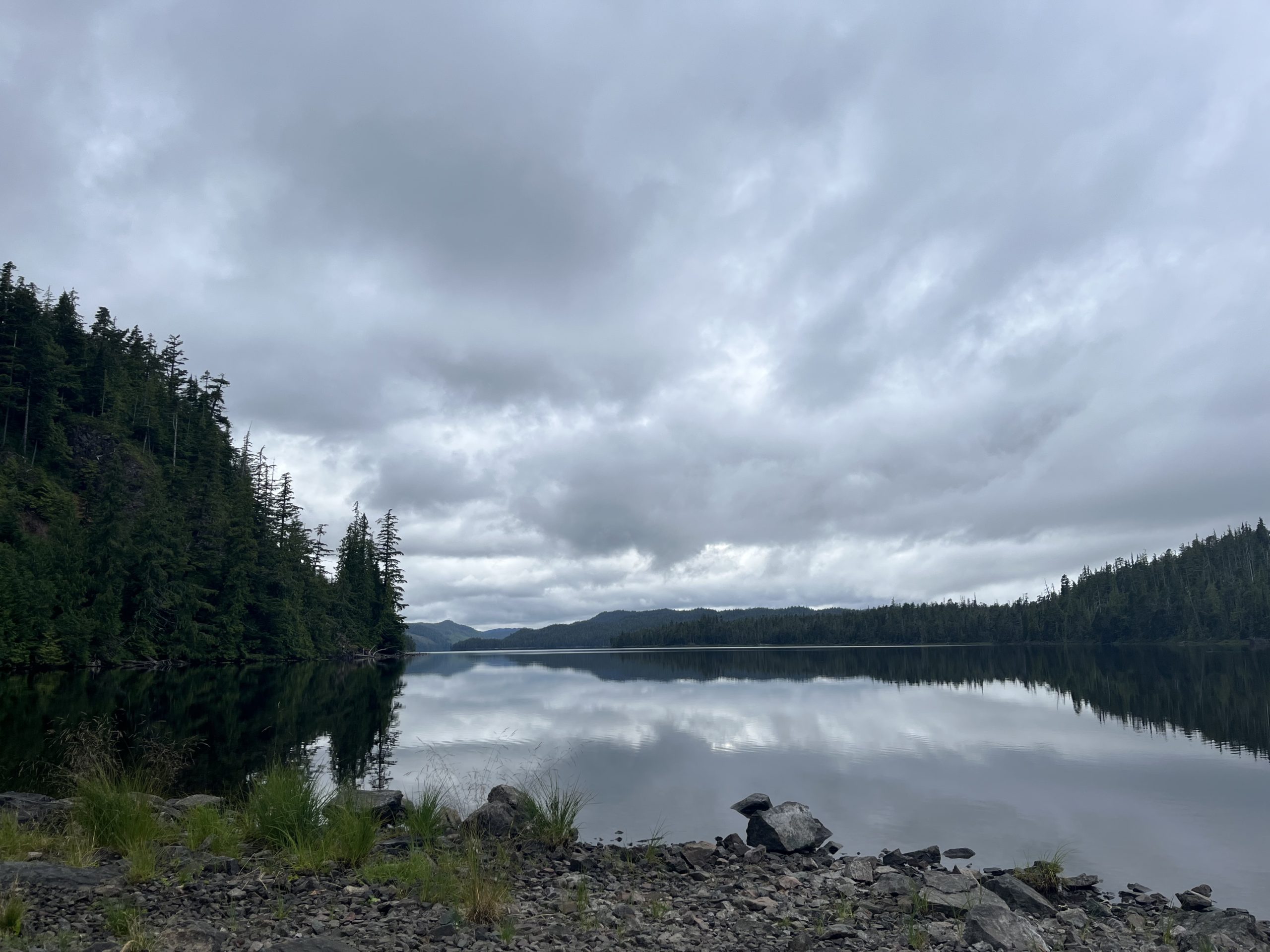 I started back on the road early on day 36, in order to get to Shushartie Bay during the low tide window around midday to have an easier crossing of the river. I was almost running – both to make good time, and also to make the monotony of counting kilometer markers go by faster. 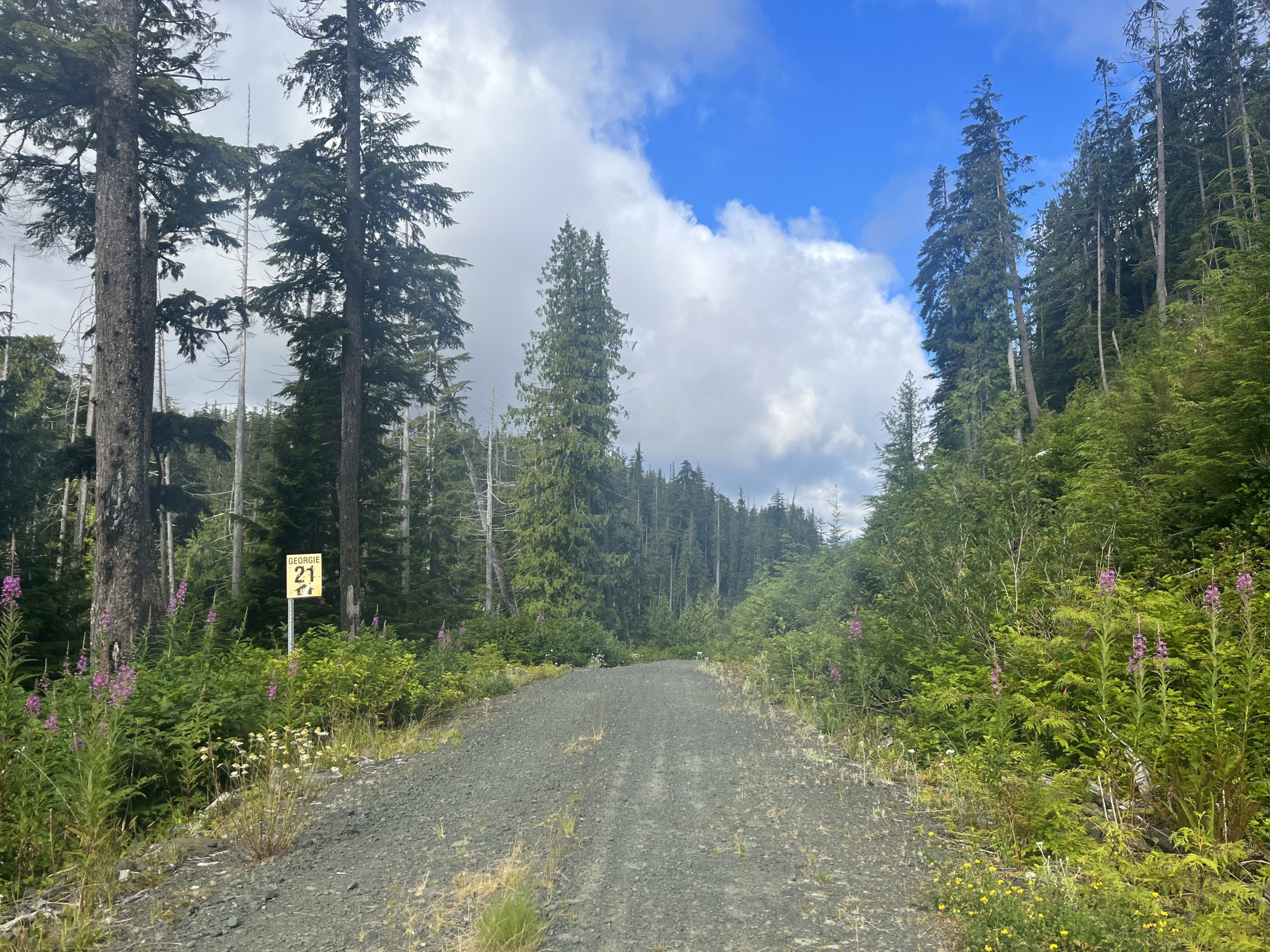 The bear count of the day was 2: one on a hill above me, turning to observe me curiously from a stump. Another was browsing the beach for grub as I burst out of the bushes into Shushartie Bay. 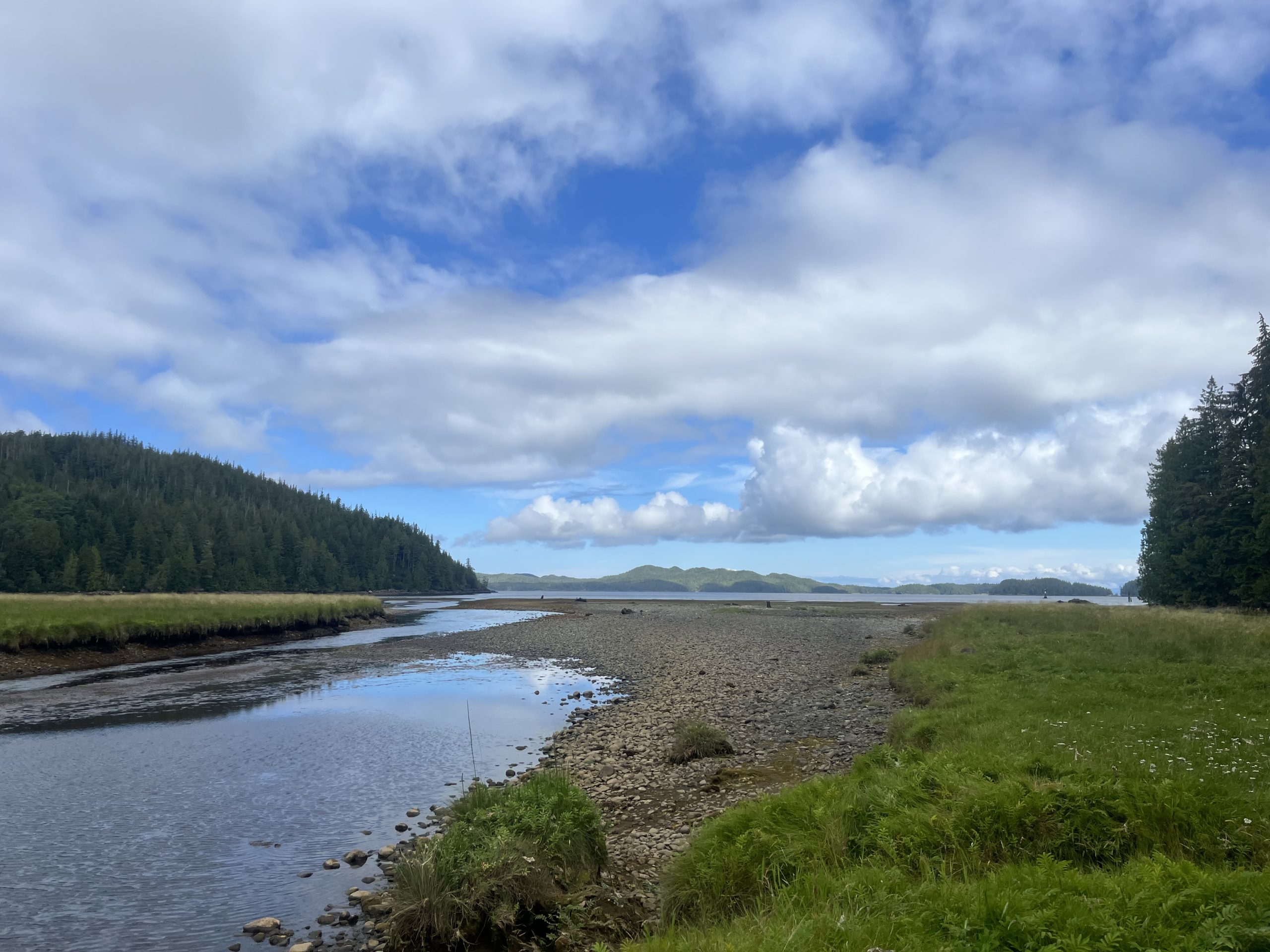 Crossing the river at low tide was no sweat – I didn’t even have to get my feet wet, it was just a hop over some slimy rocks. The shore at the far side was a barnacle-studded rockslide, which took some time to follow around in order to get to the trailhead. I’m sure the bottoms of my shoes were cursing me for getting ripped up by the shells, but they did provide some grip on the slippery boulders. 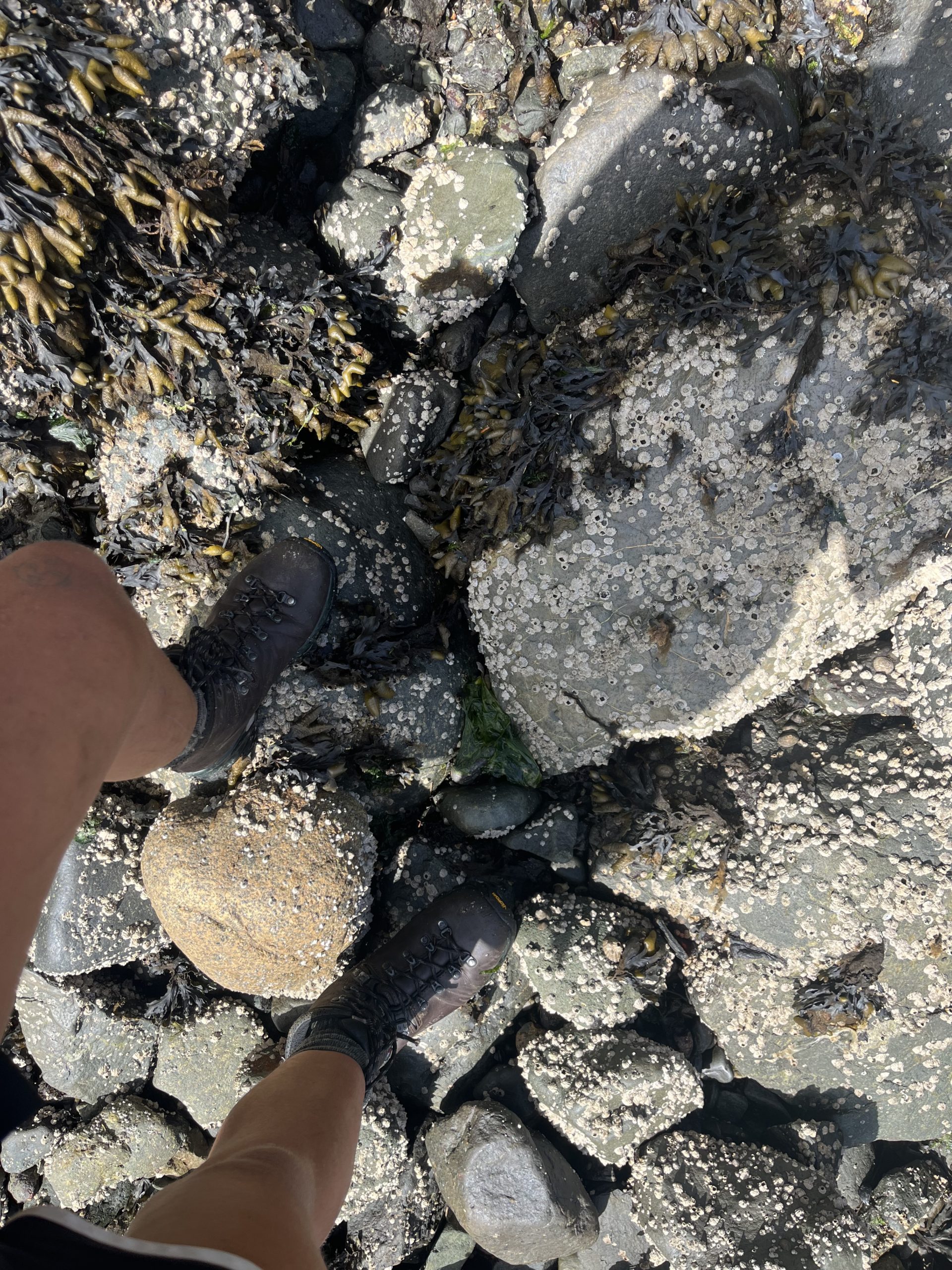 On my way, a river otter quite close to shore started bobbing up and down and snorting its nostrils at me. Strange behaviour! I wondered if it was just saying hi or warning me to get off its property. 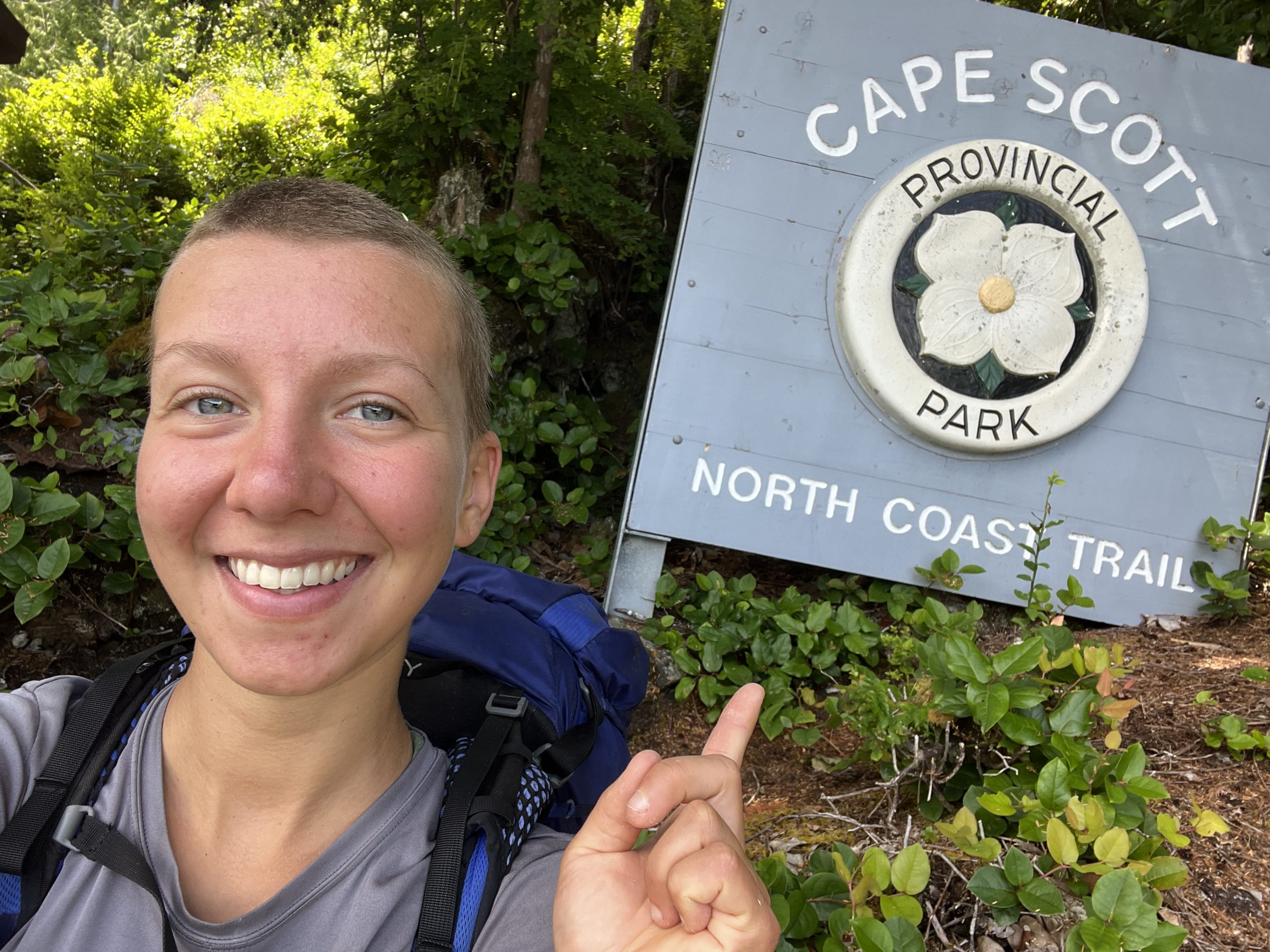 Made it to the start of the NCT!

The campsite was a steep rope climb up from the beach. There, I found a few hikers there who were catching the boat out the next morning. It was nice to hear their stories about how hard – but enjoyable – they found the trail that I’d be tackling in the next few days to be. 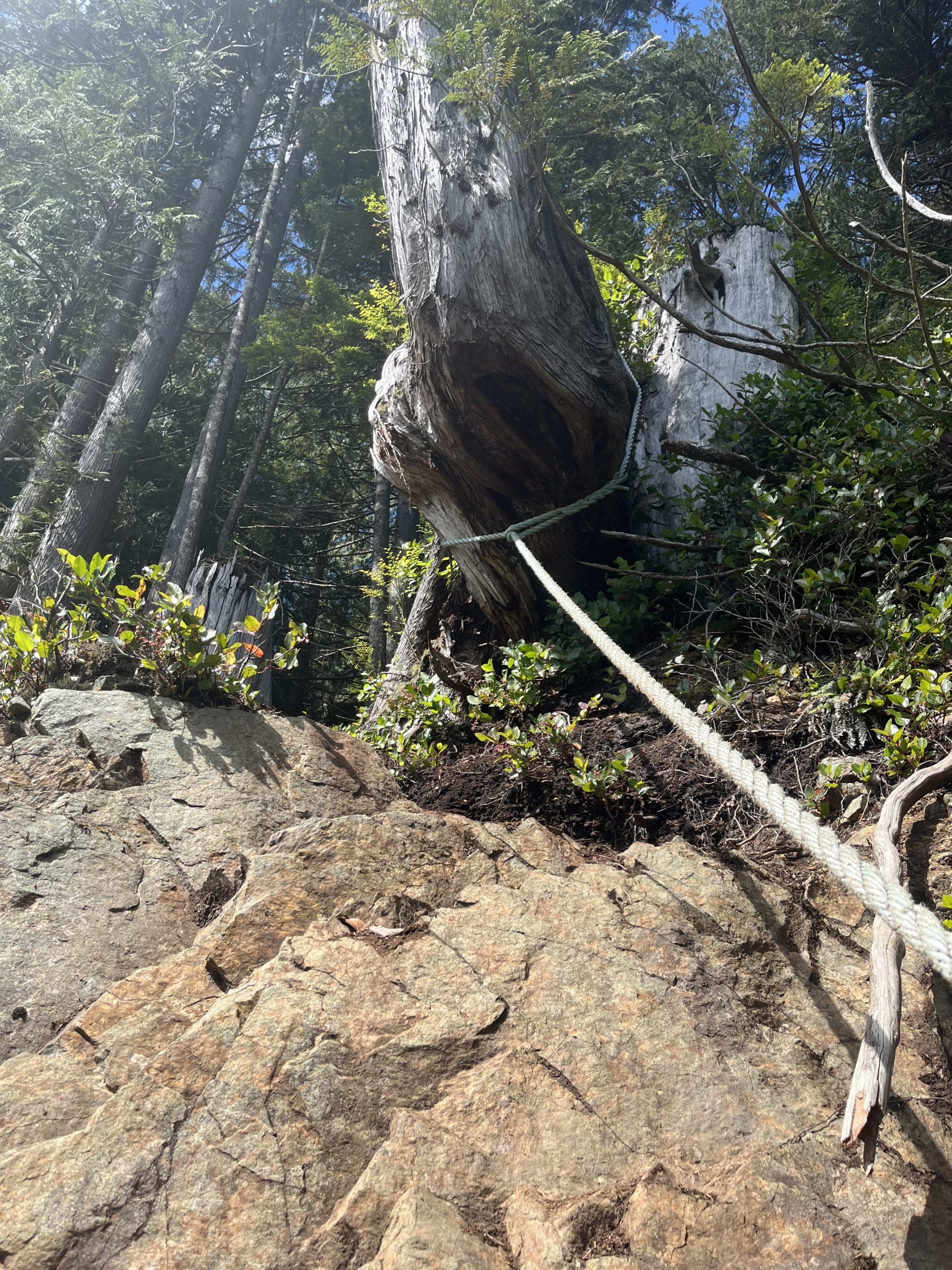 Up from the beach to camp

I crashed into a long afternoon nap while listening to my favourite song on repeat, with a view of the ocean from my tent.