Matt, who had unwittingly become my hiking partner, was continually reminding me of this sentiment. “Lights and shadows” was his mantra and he invoked those words in moments of distress as though they were an incantation that would ward off discomfort…and there was never a shortage of discomfort.

Blistering gales of wind grated against my already frayed nerves as I gained and lost maddening amounts of elevation between 12,000-13,000 feet. I don’t usually consider wind to be an unpleasant experience but I have found that there are few sensations more vexing than relentless winds at high altitudes. Despite the winds, the San Juans Mountains north of Silverton–segments 23 and 24 of the Colorado Trail–were some of the most magnificent miles I have ever hiked. 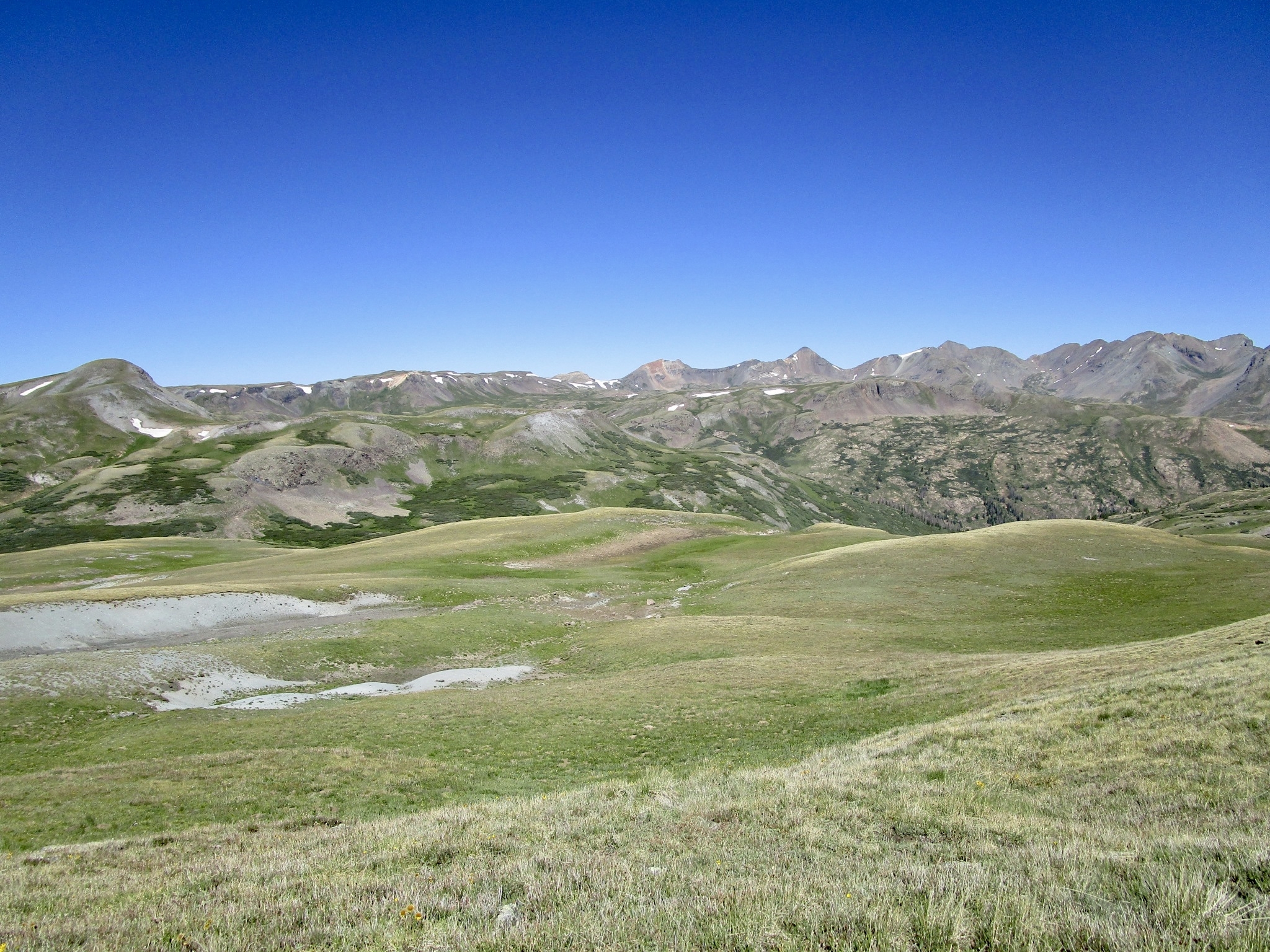 The smooth alpine balds formed a tundra that was almost entirely devoid of trees, except for a handful that were frozen in bizarre, wind-swept shapes. These trees resembled Dr. Seuss’ illustrations, charming and almost comical, while simultaneously revealing their brutal living conditions. I hiked with my broad shoulders hunched into on-coming gusts but I was repeatedly pushed off balance. On multiple occasions I stopped walking to release exasperated screams into the howling gales which seemed to scream viciously back.

The views were awe-inspiring. In every direction, mountains were silhouetted against more mountains in dramatic folds. Their graceful slopes would intermittently give way to sheer, brightly colored cliffs. The cliff faces were stratified with blue, orange, and pink bedrock, inadvertently displaying eons of geologic formation and erosion. The trail wound through valleys, modest peaks, and massive plateaus that were dimpled with lakes. Their smooth, mirror-like surfaces dappled with rocks and were disturbed only by the wind sweeping across the terrain.

I sat, legs folded, on one of these rocks which gave the illusion that I was floating on the water’s surface. My spirit felt uneasy. The dissonance between my own aggravation and my idyllic surroundings seemed to compound my sense of alienation. I reminded myself that emotional troughs usually follow psychedelic experiences. Analogously, “post-trail depression” often follows the completion of a long journey and the finish line grew closer with every mile I walked. I felt all that I would face at the end of my hike looming like dark clouds on the horizon of my mind. What would become of my prior relationship? What would happen to the one I was forming now? Would the connection between Matt and I inevitably burn out once we returned to our respective lives beyond the trail?

As I sat reflecting atop the water, three prissy llamas saddled with panniers appeared and trotted toward me on the path. The llamas were accompanied by three lovely ladies. Somehow, they all managed to resemble one another. The llamas regarded me with cool indifference, as if saying, “It’s time to stop feeling sorry for yourself and get moving.” 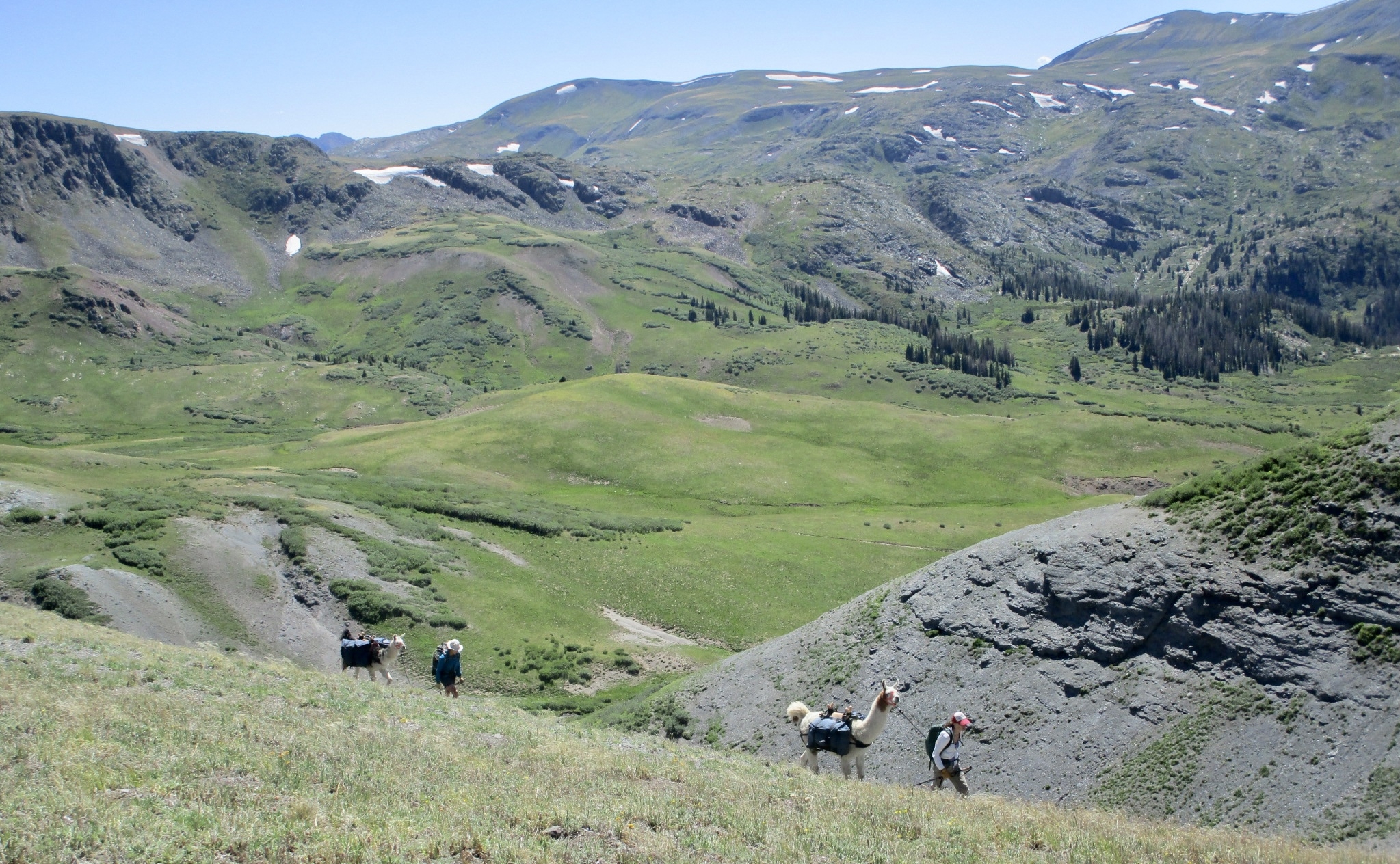 I hiked onward toward the town of Silverton, which I hoped to reach before dark. I approached an enormous descent and I couldn’t help but feel a bit saddened that I would be leaving this world up in the clouds. The sun was just beginning to slump to the west, casting an ethereal golden glow through the mist that clung to edges of the mesa, obscuring the earth below. Hanging Lake rested, as though on a shelf, in the palm of a rocky outcropping which jutted overtop the canyon that contained the trail south to Silverton. Farther down, I could see evidence of an avalanche in the canyon. Gargantuan trees had been effortlessly snapped, splintered, and intertwined like toppled jenga blocks. 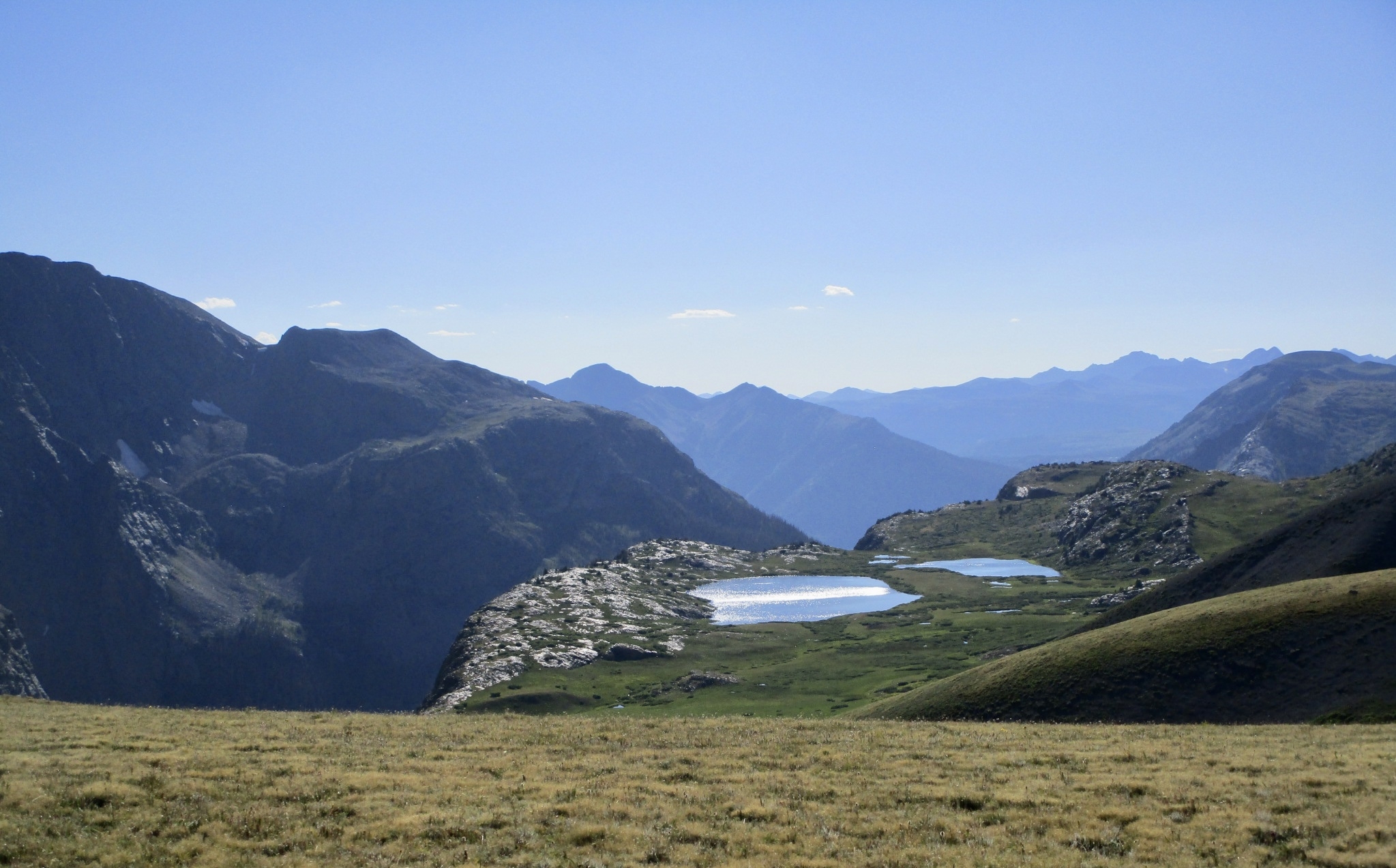 For a while, I perched myself above the switchbacks cross-stitching their way down the mountain. I allowed myself to be fully absorbed in the moment, to commit the sensations and sights to memory. To notice all the emotions swirling messily within my gut. Matt appeared, having hiked behind me for most of the afternoon, and offered up a joint.

“Maybe we should stay up here,” I suggested.

Matt shrugged, “Sure. Except neither of us have any more food.” 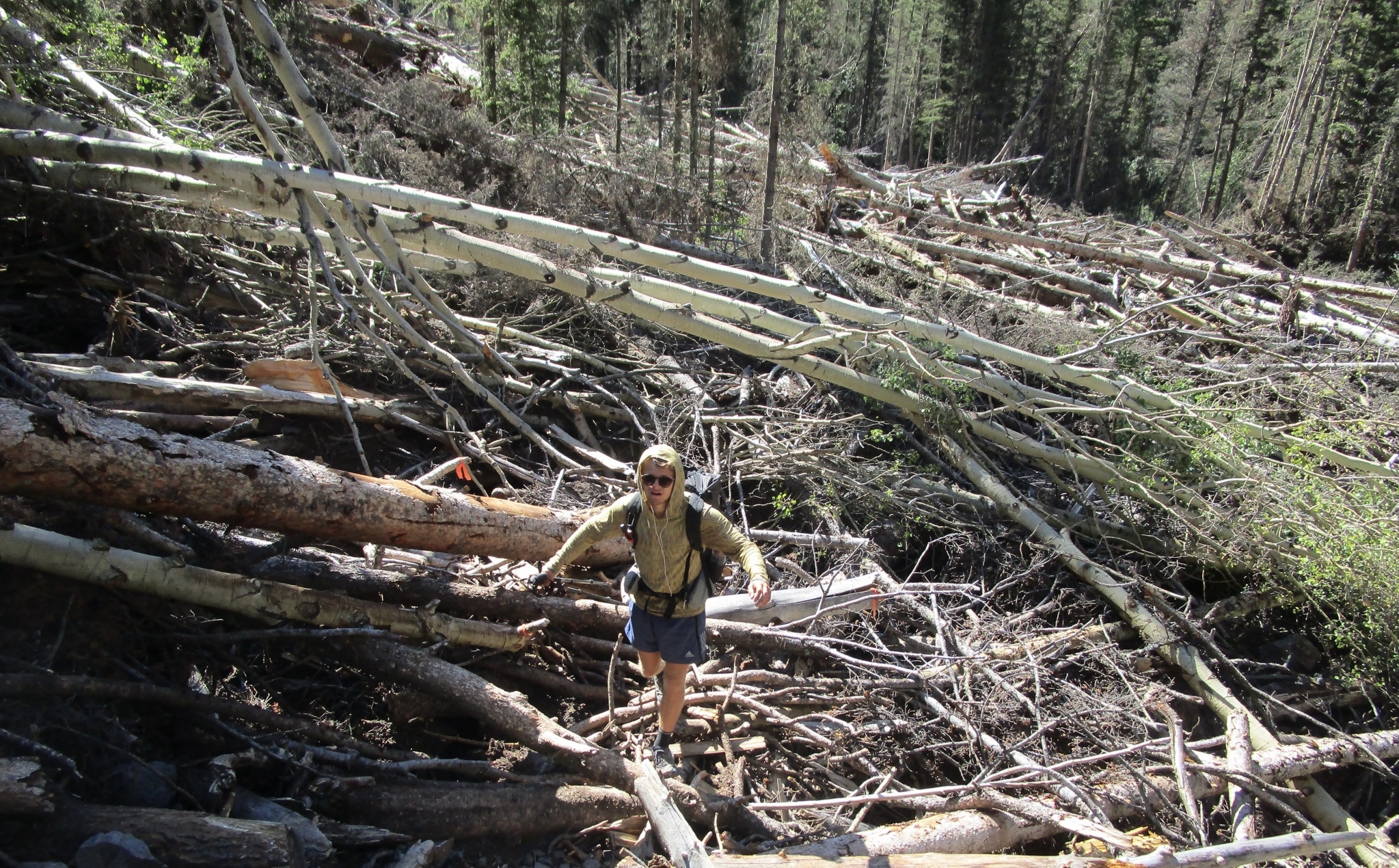 In Silverton we stayed at The Avon, a saloon inspired hostel with stylish common spaces and a faux-rustic atmosphere. Backpackers and fellow travelers–including Mountain Goat, Big Spork, and other favorites–mingled over cocktails and enjoyed various other vices in the dim glow of the lanterns. Matt and I found ourselves positioned at the center of this gathering, but somehow removed from it, like planets orbiting a star or a blackhole.

Perhaps it was because we were absorbed in a game of chess, and shamelessly absorbed with one another, but it felt as though we had assumed roles in a performance. When we’d meet other hikers, they were enamored with the story of our serendipitous meeting. Tantalized by our outrageous affection for one another. Scandalized by our antics and the assumed invincibility of our youth. We liked these roles, played into them even. As if, in our short time together, we had conceived countless dreams; possible futures and prospective versions of ourselves. Dreams of actualized selves and a connection that was immune to the tarnish of time and grief.