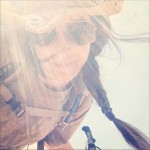 Connecting to the Trail

We watched as the stark white thunderclouds billowed into enormous shapes expanding high into the sky until their coloring began to change for the more ominous of shades. Although still somewhat light outside you could see the flashes of lightening fill the sky surrounding us.
Letting our pre-packed dinner absorb it’s hydration long enough, we were rushing to scarf it down with enough time to pack all its remaining contents into our bear canister to hang. It was a timed game against Mother Nature and we were clearly falling behind. The skies had faded to darkness and the lightening seemed to be flashing nearer. Rushed, we slammed the last bites down, tossed everything carelessly into our container and made our way through the dense blackberry bushes to hang it before getting drenched. Though having a brand new cord, it was more difficult to work with, coiling into a knot from a lack of use. That working against us, we knotted ourselves into a ball of mess as this time the flash of lightening was upon us. I felt my body’s desire to fall flat towards the ground, thinking I was in a potentially dangerous scenario. Instead I stood firm on my two feet, working out the knot in order to beat the odds. And after a few cross words and curse words exchanged, the food was finally hung successfully.
Being summoned early to our shelter we sat underneath the tarp listening to the downpour beat against the nylon, feeling the wind whip about us and watching the brightest bolts of lightening illuminate everything in sight. The passing storm was upon us and I was reminded of the power She has out there! I wasn’t in control and it felt beautifully humbling to be at Her mercy once again. We stayed up for about two more hours enjoying Her offerings, deep in conversation. Then long after we fell asleep the night hours passed into the early morning, the skies cleared long enough for us to wake up to the quarter crescent moon boldly illuminating our camp. Massively visible, laying low in the sky, I left the warm comforts of my sleeping bag to enjoy it. The stars were twinkling brightly despite being somewhat drowned out by the moon. I stood there in awe of the moment. How could I have taken such an extensively long hiatus from this kind of beauty?! As I chuckled out loud in amazement, my breath escaped into the air, trapped within a slow moving cloud of moisture. My breath now a visible morphing form lingered beside me for a long time, growing larger and more pronounced. Although it was bit eerie standing there among the low lying fog in the silence of darkness, I purposefully began blowing air outwardly in an attempt to capture the moment on repeat. It was different than anything I had ever seen before. 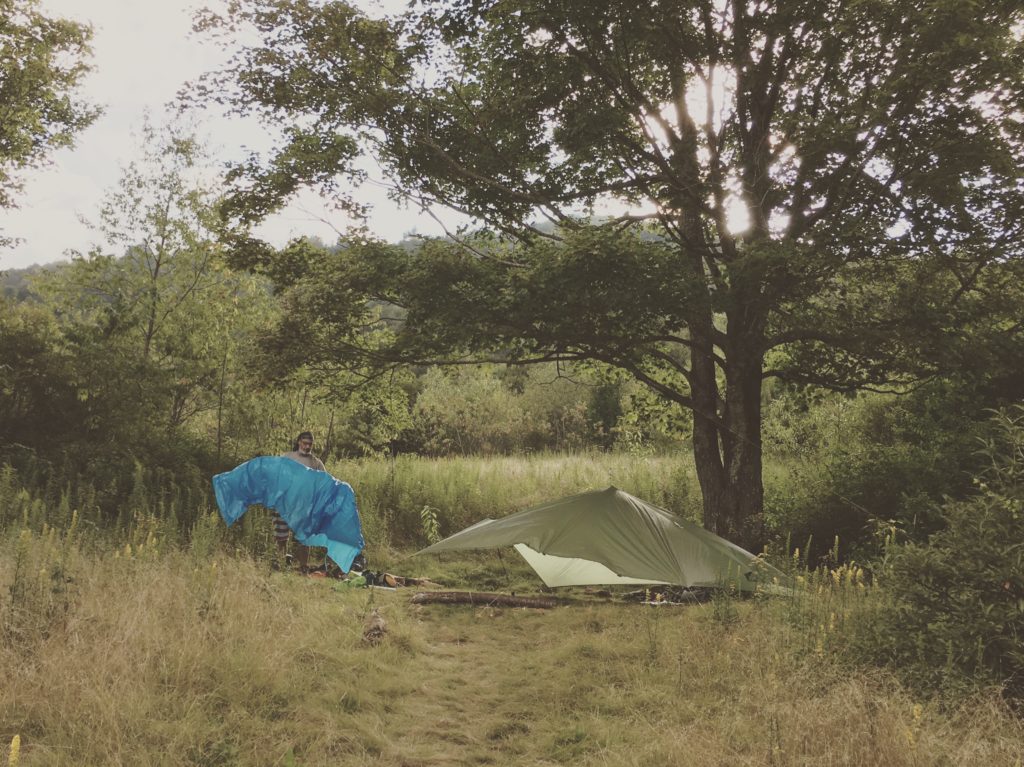 That was the first of two nights spent backpacking in the Shinning Rock Wilderness this past weekend.
After taking our time getting moving in camp the next morning, we packed up a wet tarp and set a course Northwest through the dense lingering fog. The trails from here were wildly overgrown in areas and were forced to hike at a distance from each other else chance being slammed in the face with the elasticity of a branch falling back into place. Footing was questionable at times as we couldn’t always see below the belt from the web of brush we were walking into. There was little to no trail markers indicating our path, leading me to question if we were on the right course a few times though our gut calmed my concern more often then not. 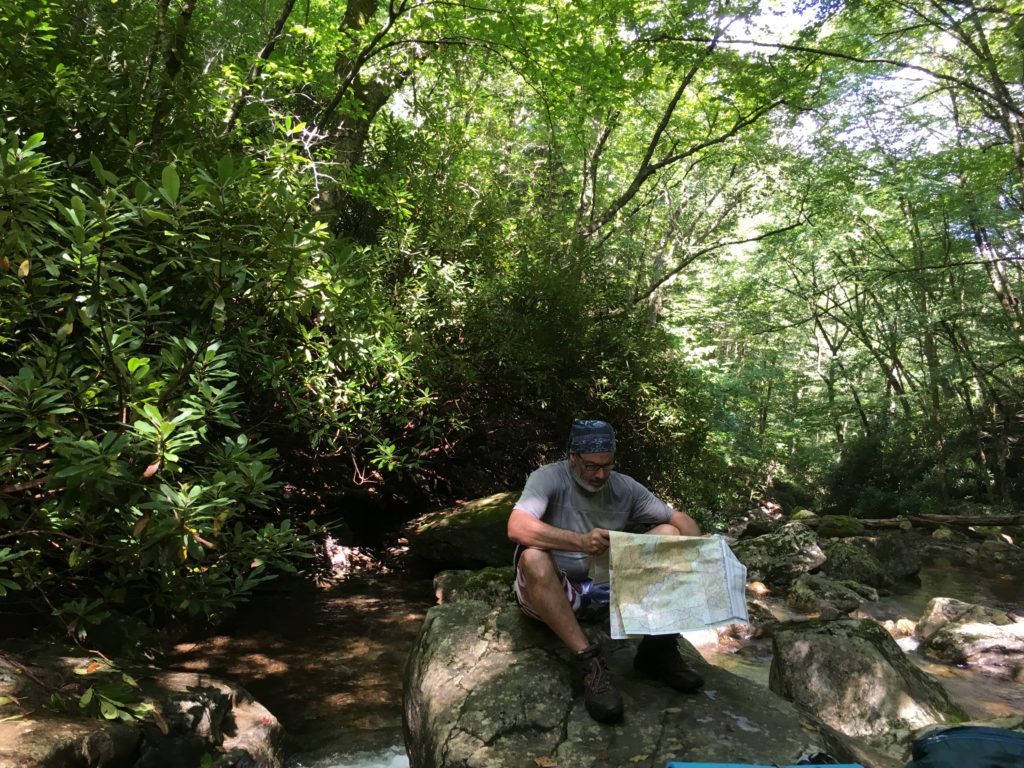 Due to beginning our loop hike at a higher elevation, our path lead us either entirely downhill or entirely uphill but not mixing that elevation within the same day. It was either all one or the other. What felt as a never ending extensive downhill that second day began taking a toll on my knees and was I grateful to have reached camp our second night. Nestled in a corner next to the merging of two large creeks, the sound of rushing water felt like having walked into a surround sound amphitheater. We were re-energized and grateful to have the ability to soak off the layers of summer sweat in the chill of mountain water temps. The perfect cure for our tired feet! 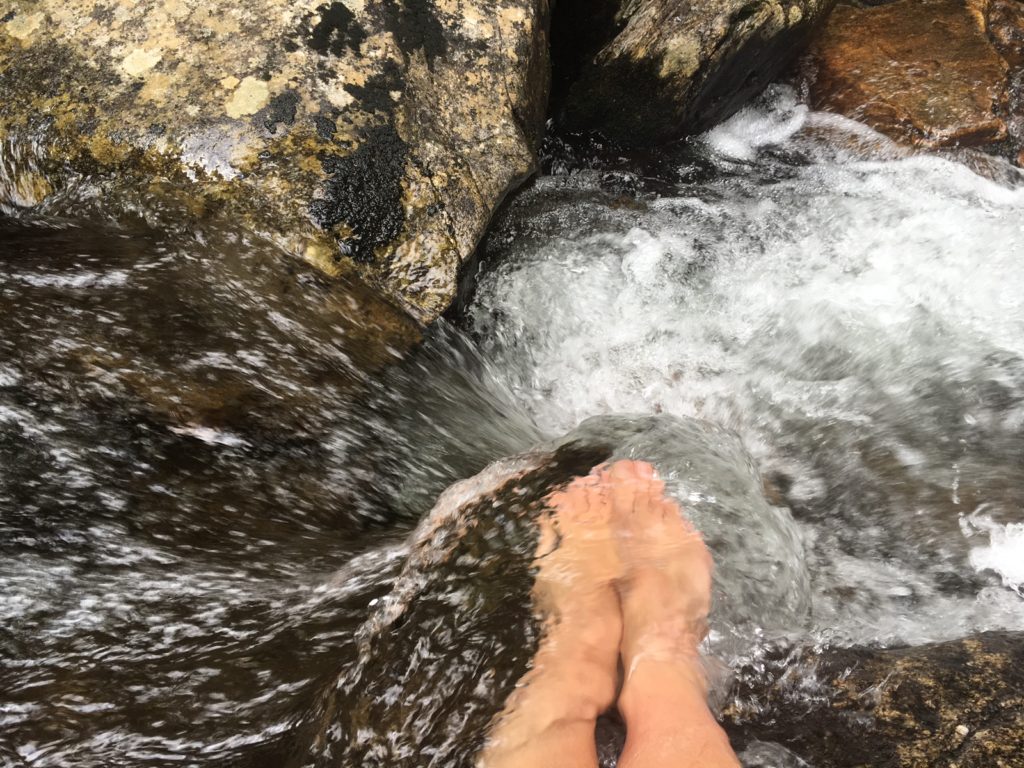 The following morning was yet again was off to a lazy start. I suppose we figured why rush when our hike wasn’t about mileage but instead to enjoy the cool mountain air and reconnect to all it had to offer. We meandered through the continuous uphill of pine, and then rhododendron. Until coming to the end of one trail intersecting with another at the cusp of the Blue Ridge Parkway. Navigating through a web of confusing intersecting trails we happened upon a highly trafficked path to Skinny Dip Falls. Well, don’t mind if we do…and so we did, well partially. And after soaking in the extremely frigid temperatures underneath a more secluded waterfall we were ready to push through the last lengthy stretch of an entirely uphill trail. 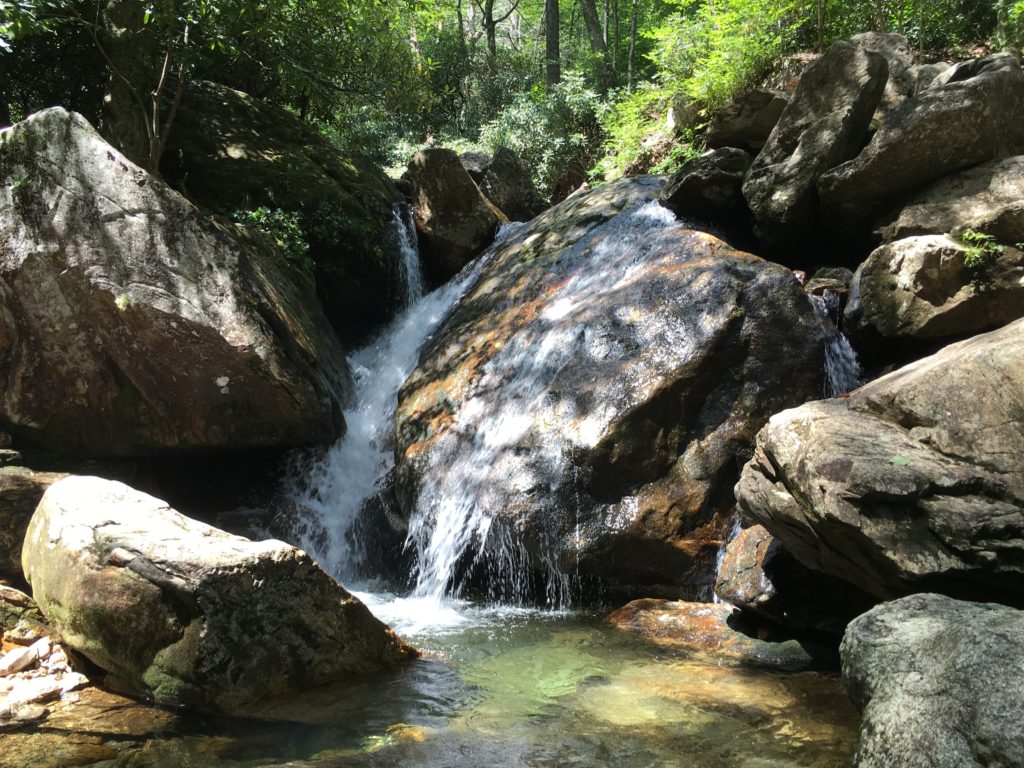 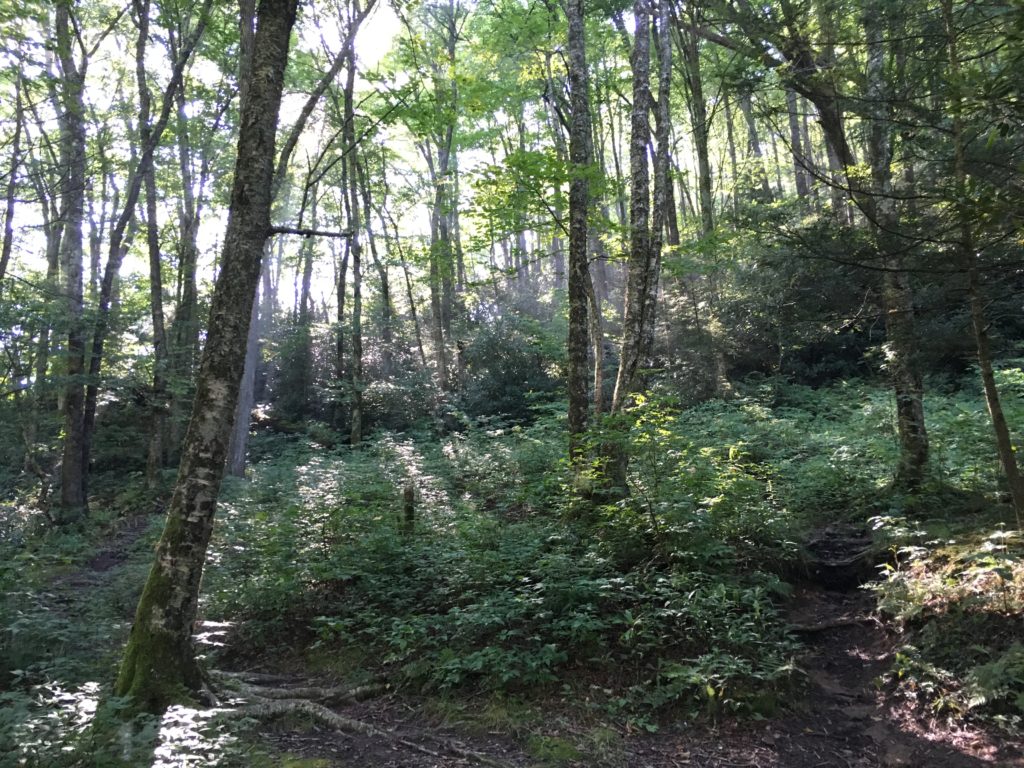 The smells of the forest were alive, including a pungent tangy mix of fish and rotted…well rotted something. We continued zigzagging up the switchbacks, half expecting to see the bear we were certain was linked to that stench. Though the lucid bear never showed itself as we continued to climb even further up out of the gorge. Feeling confident we were in the clear, we soon had reached the ridge full of blackberry bushes just perfectly ripe for the pickin’! Unwilling to allow our three day loop to be over, I spent more time picking and gorging on blackberries then I did walking forward. We were now on the final home stretch back to our car. 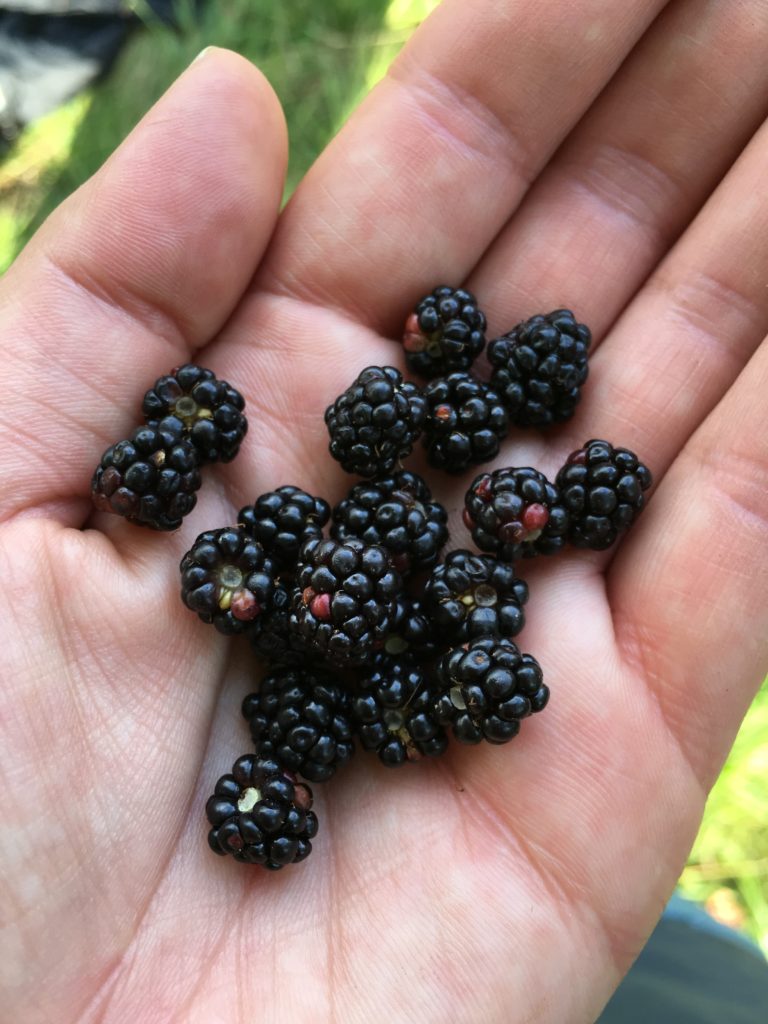 The weekend was full of adventure, with many missteps and a humble reminder that I was clearly out of shape. Though more importantly I remained in an acute state of blissful sensory overload. As if having seen everything again through rose colored glasses I was once again reconnected to all the smallest of details that make The Outdoors the most grandeur place on earth. It was fulfilling. It was much needed.

It felt as though I had once again returned home. 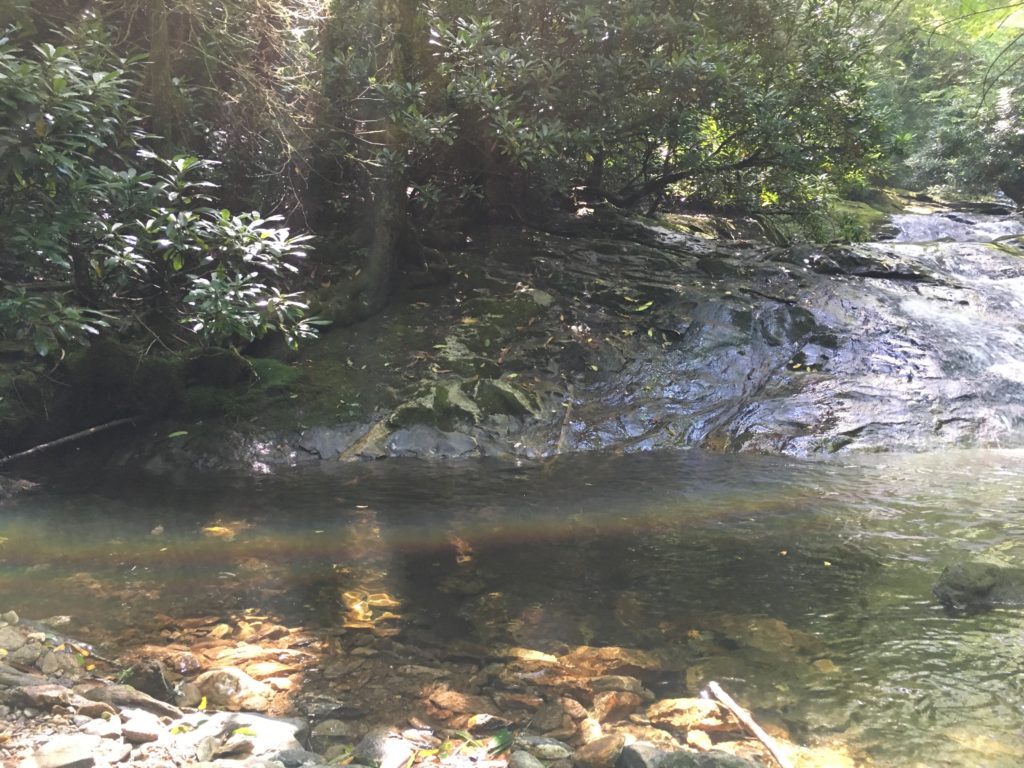 With a desire to hike every possible mile, I've got a lot left to check off on my bucket list. I'm fueled by the outdoors and the grandeur backpacking offers. The outdoors is my playground. I've gone from being a climber to a backpacker and I absolutely love it all! So far I've traversed Georgia, Arizona, South Dakota, Arkansas, Michigan and the Kalalau Trail in Kauai to name a few.