I was hoping to summit Gannit Peak but the teams of climbers said it was impossible without climbing gear. Snow bridges were out and no fall zones on the glacier crevasses. One climber drew me a route on my phone from Bonnie Pass. Also there is a North approach that is easier.  I have 35/50 highpoints done so I’ll come back someday with proper gear for Wyoming’s highest peak.

Knapsack Col was tough. The loose scree going up tired me down fast. I found it easier to walk up the glacier snow for a while. The view from the top was awesome. On the way down I slid a lot. My shoes tread was wearing down. Sometimes I would jump on a big rock and surf the scree until I stopped. Then I’d jump off using my poles for balance. It was fun but perhaps too risky for backcountry. 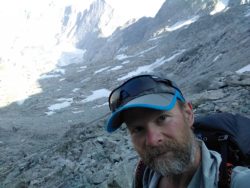 The CDT dropped into the Green River valley. The glowing green river was hypnotic. Rushing through the rocks and over trees. Through the bends with towering rock formations above.

The river widened into 2 lakes. I went for a swim in the last one. A round topped mountain stood in the backdrop with threatening clouds sneaking up beyond. I packed up and hiked up the valley. The rain started just as I set up my tent and crawled in.

The hitch into Dubois took a while but my driver was super nice. She dropped me off at the church hostel where I met 3 fun trans american bicyclists. They were biking across the US. We laughed through the night as we shared stories.

The trail tread lessened as I hiked deeper into the wilderness. Water was plentyfull. Too plentyfull. Off and on rains throughout the days and nights. The muddy trail hidden by the car wash thickets.

My feet had turned white from the constant wetness. My shoes were like sponges and I would dump the water out and wring my insoles on breaks.

I met two guys that worked for the CDTC. They were out hanging signs for the trail in the rain. I played my trekking pole flute for them as they tried to guess the tunes: Gilligan’s Island and Tequila.

Once in a while I’d see a team of horseback riders coming into camp. Those sections seemed to have better tread.

I looked for hot springs while I was in Yellowstone. As I approached Witch Creek I could see steam rising from the boiling giesers. It was still rainning but I found a hot spring mixing in the creek. It felt great. There was nobody around and i really felt that i had the park to myself.

On my way back to the trail I accidently stepped in some boiling water. It didn’t burn my feet but it did melt my left shoe cushion. As I walked my foot would colaspe inward. I tried to lace the shoe differently but it was not effective.

I called some friends that were coming to visit me in the park. They got some shoes and resupply items as I dried out under am awning at old faithfull. I watched the great gieser burst into the air while eating bacon and eggs.

Soon my friends arrived and tempted me with canoe/camping on Jackson lake of the Tetons. I took them up on their offer and took my first zeros. I gained some weight (lost 23 pounds), and dried out my feet. After 3 days I was back to Yellowstone. Hiking out I met a bubble of fun SOBO’s. It was exciting to hear what was ahead. 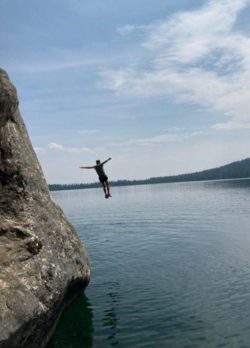