Josh and I took our first zero and we met a bunch of new hikers at Doc Campbell’s.

Folks who were hanging out planning to go down to trail days, who had been ahead or behind us. Out of everyone we met, though, it seemed like no one else was planning on continuing up the middle fork of the Gila without taking some part of the high route. I think a lot of people were tired out by the crossings. I was, too: we’d done 54 in the last section, and while they promised to be a little shallower and easier the further upriver we went, constantly crossing was exhausting. But the Gila is supposed to be a highlight of New Mexico, and Josh especially loves being near water, so through the river we would go!

Our first day we did a short road walk to get the the trail, which started near the Gila Cliff Dwellings Visitor Center. Within our first few crossings the river seemed more mellow and tame. By midday Josh and I were deep in the canyon with steep, high cliffs on either side. 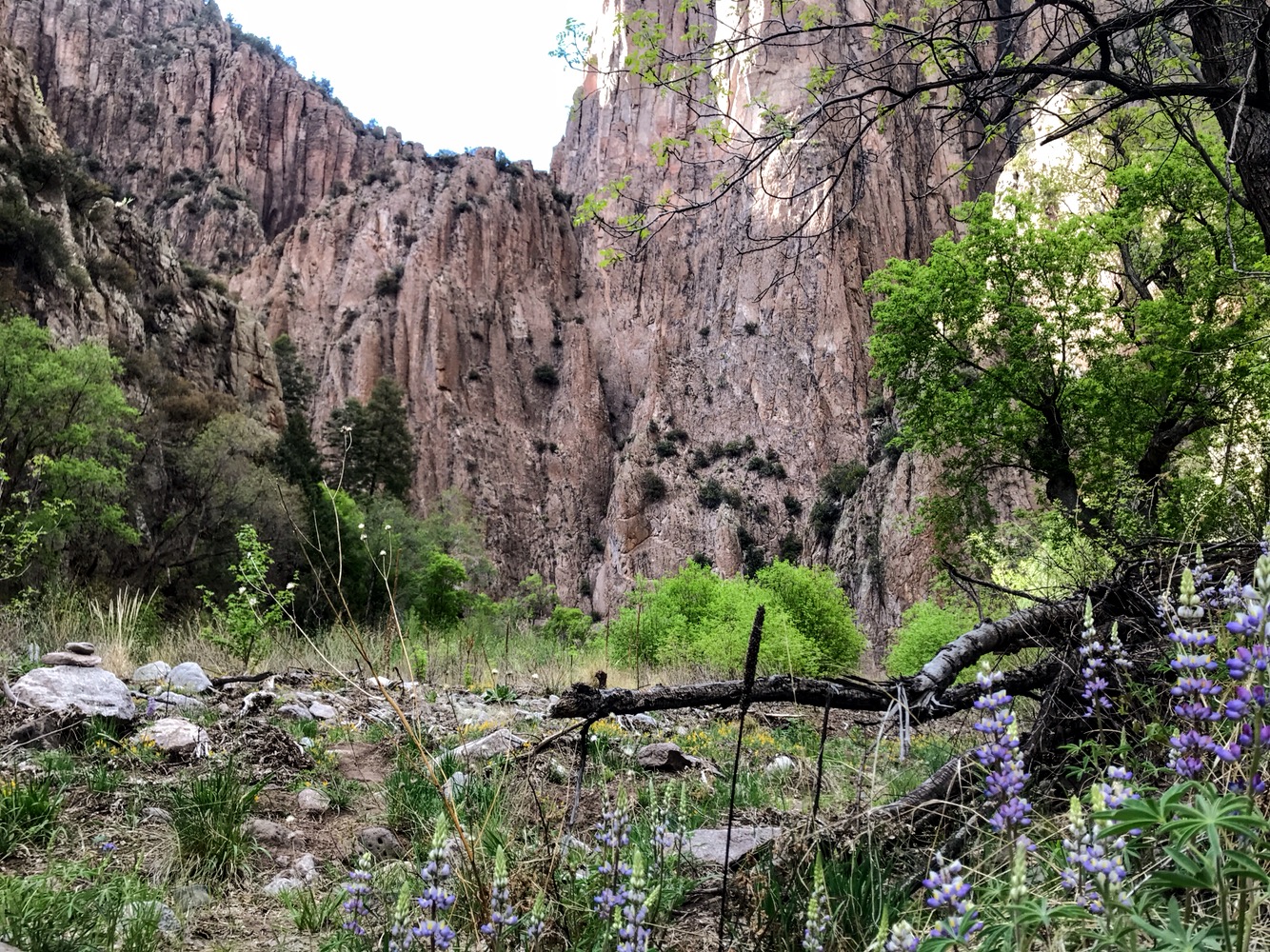 There were majestic towers and layers of rock walls, prominent against the cloudy sky.

When we got to Little Bear Canyon we started counting crossings. A ranger from Gila Cliff Dwellings, who we met at the hot springs campground, told us that Jordan hot springs would be about 15 crossings upriver.

The trail was pretty good through this section. It’s probably a popular spot for short backpacking trips. We found the hot springs easily enough after 17 crossings.

The pool was huge, with crystal clear blue-toned water.

I’ve never been in a natural hot spring so large, and while not very hot (slightly below body temperature), it was warm and relaxing.

Josh and I hiked on another few miles. Just after sunset, having passed nice, flat, curated tent spots all day, we were finding nothing. We charged past a couple of folks camped on a beach who I think were not thru-hikers. I felt bad for not saying hi but we were on a mission. Finally we gave up and picked a flat enough spot. Hard to complain with the river canyon being all around us, anyway!

The next day was a bit of a struggle. The crossings were so frequent that it was slowing our pace down to a crawl. I was tired, and our breaks were longer than usual, as we tried to dry our shoes and socks despite knowing they would immediately be soaked. 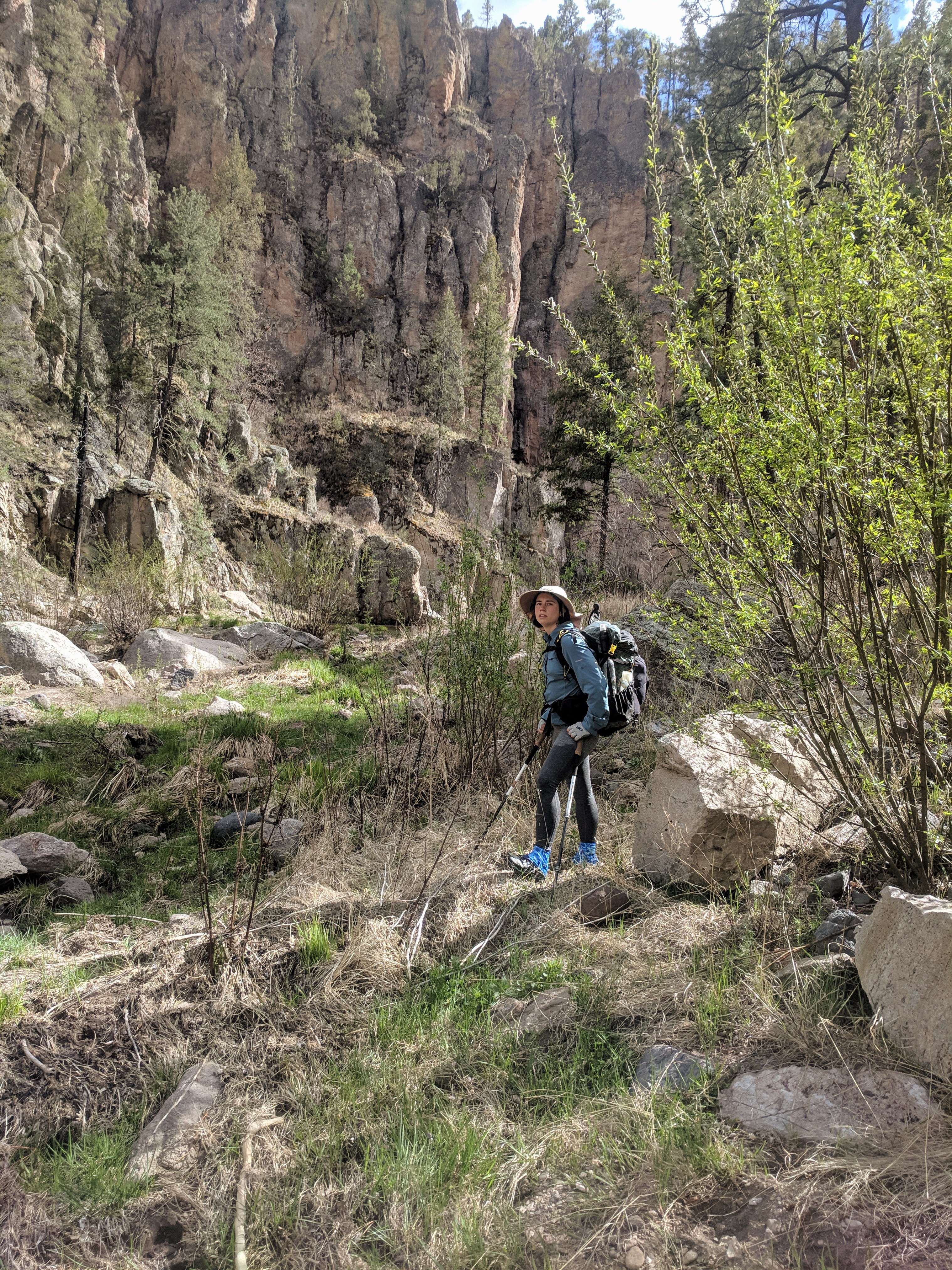 When I counted to 81 crossings for the day I started saying in my head “82 crossings but a bridge ain’t one, 83 crossings but…” and so on until it was drizzling and we decided to look for a tent spot. We found one after the 100th, which seemed like a good place to stop. 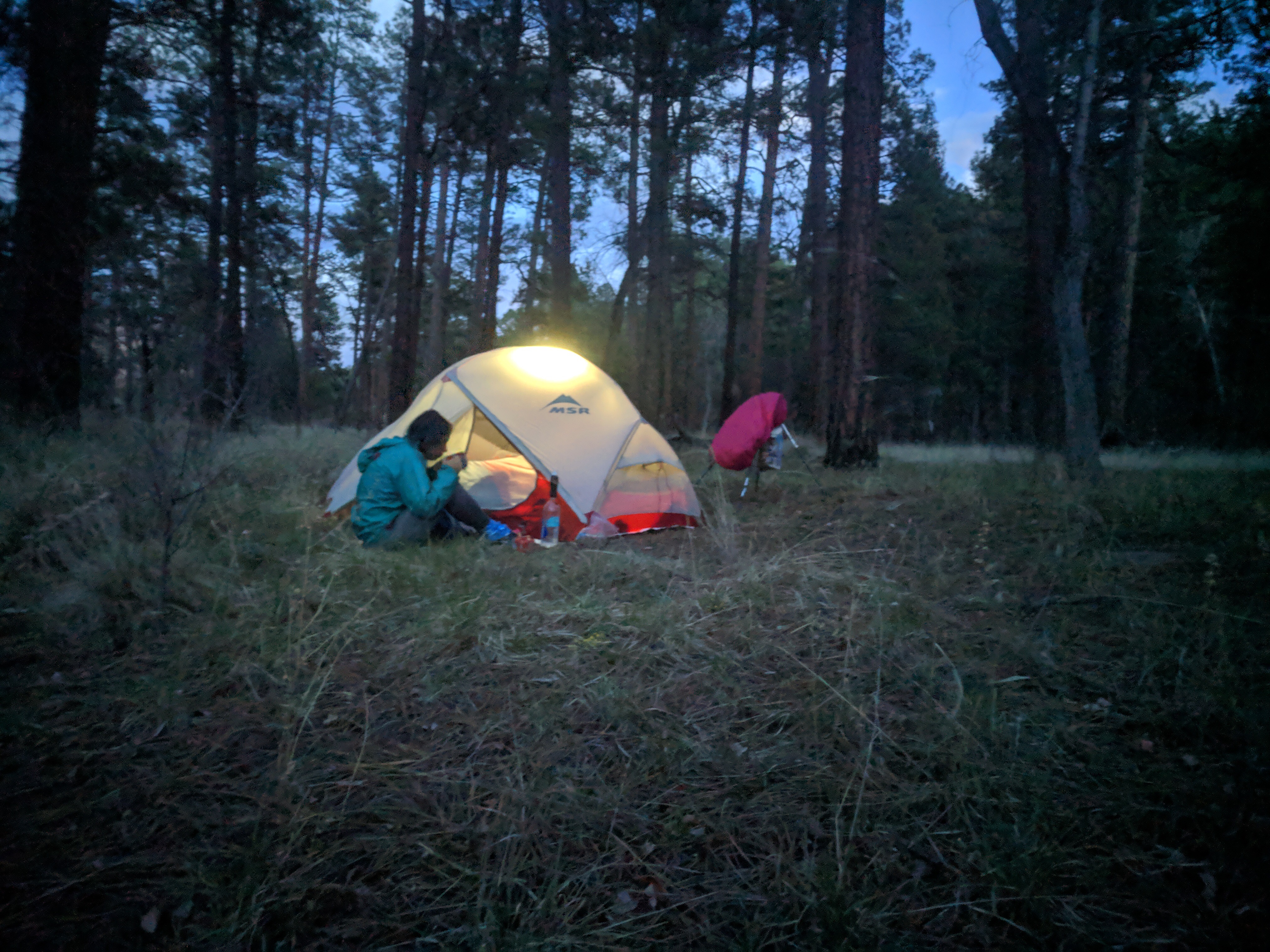 In the morning we had only about 5 miles to go to Snow Lake, marking the upper end of the Gila. The cliffs of the canyon had opened up into hills on either side of the river, so that the path stayed on each side longer.

On one stretch we were following a particularly good path and it seemed to be veering off to the right into another canyon, so we cut to the left to continue following the river.

About a mile later I suddenly realized I was so hungry that I couldn’t keep going. I wanted to get to Snow Lake before taking a break, but I had already eaten all the snacks in my hip belt pocket. Josh and I sat down and I started devouring a dark chocolate Easter bunny my parents had sent me, along with some macadamia nuts, and candied ginger. An excellent combo.

“What?” I laughed, emotionally preparing myself.

“We’re about a mile down the wrong creek.”

And because we both had no desire to backtrack, we decided the best plan was to climb straight up the ridge to the north of us, then head back down cross-country to where Gilita Creek and the Gila River meet. The way up was challenging, but I managed not to kick any loose rocks down onto Josh, and the view from the top was excellent. Iron Creek, which we had followed accidentally, looked okay now that it was behind and below us. We made it to the confluence and decided to go swimming one last time as a way of saying goodbye to the river. By which I mean I splashed some very cold water all over myself and then tried to dry my shoes while eating a Snickers.

From there Josh and I walked on dirt roads around Snow Lake, then followed a use trail up through T Bar Canyon, which in this wet year was a sweet, thin, green ribbon winding through rocky brown-gold hills.

We ran into another hiker we hadn’t met before, and I talked to him off and on as we leapfrogged, hiking into the night on a dirt road, then hard-packed gravel.

The area north of Snow Lake was all rolling pale golden hills, sometimes with trees and sometimes without. Such a big sky. When the Gila River Alternate rejoined the official CDT we were back in bigger hills. We went through a short burned section. 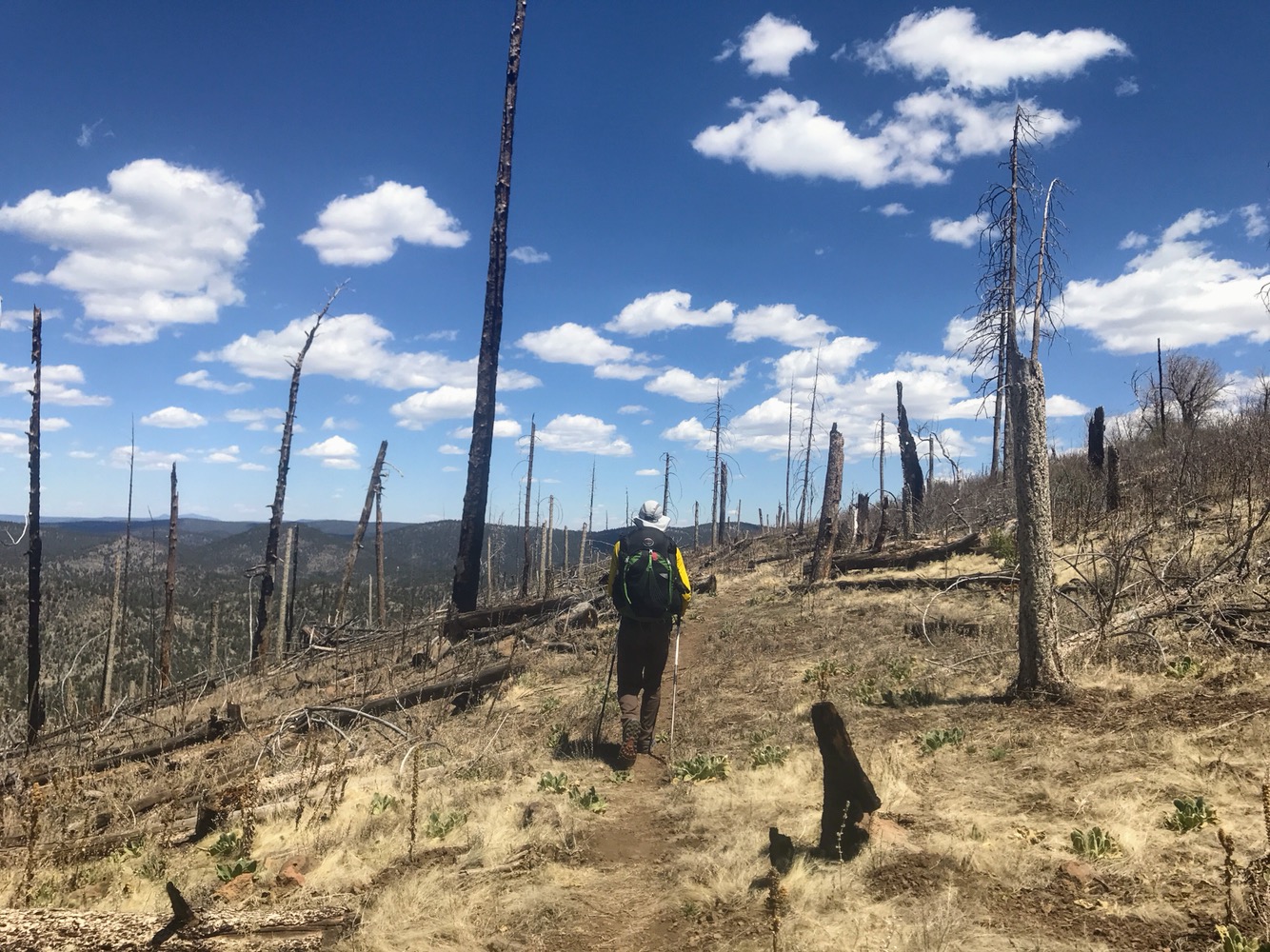 Josh and I ran into Dog Ma and Toolik at a muddy pond. (Oh, sorry Guthook, did you label this an “earthen tank”?) We had met them at Doc Campbell’s, and it was great to see them both again. Hiking on, we took a short Ley alternate that promised better water sources through Govina Canyon. It did have great water, but my patience for use trails in canyons was running so thin that when Josh proposed stopping for dinner and then hiking on, I refused to stop before rejoining the CDT.

Right before we hit the trail, at the GC No. 5 Tank (also a muddy pond btw), we ran into Wing It and Stoke. They shouted at us as we approached and we stood around for a while, catching up, before going on together. 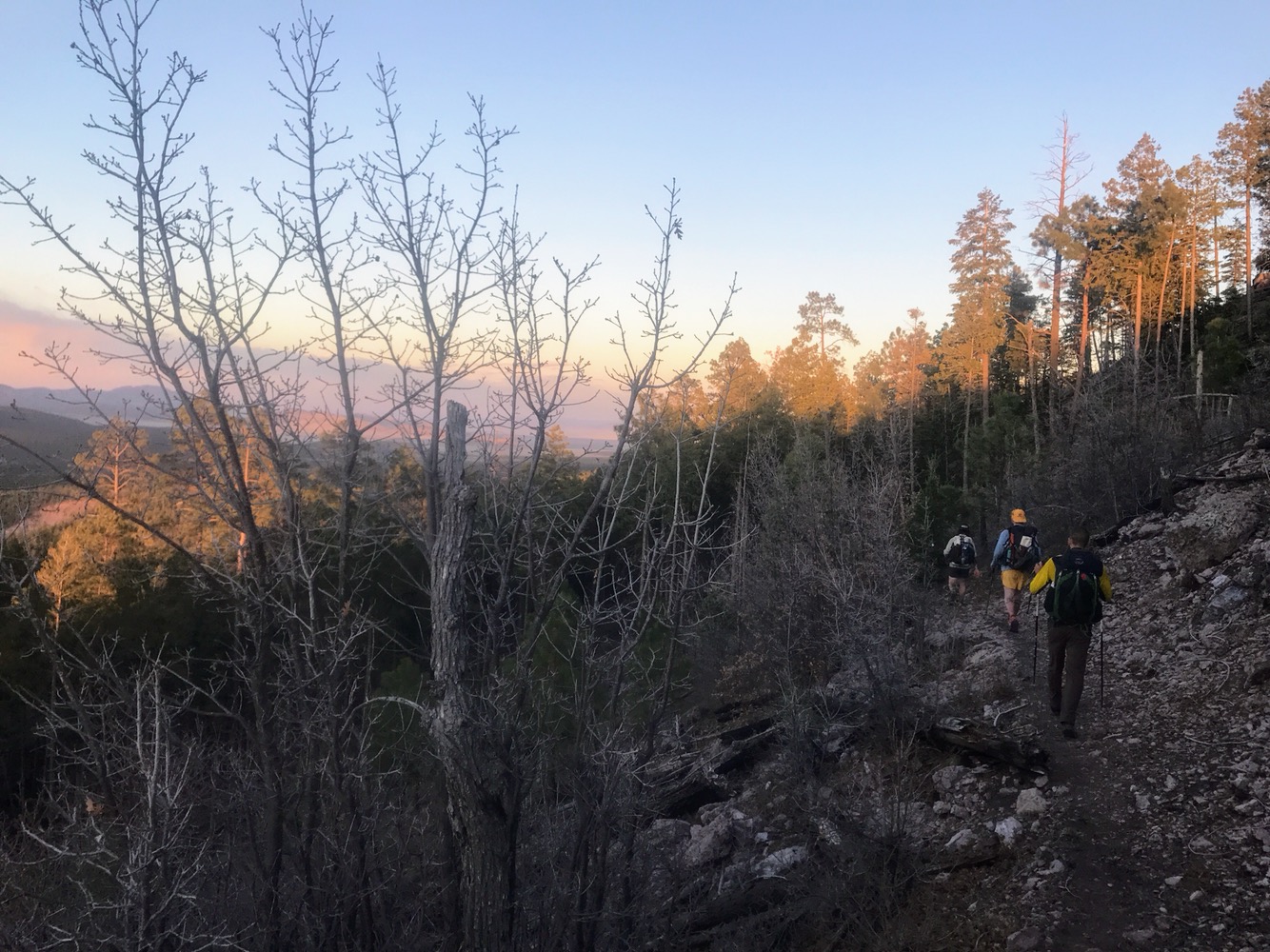 They had taken the high route and told us an epic story about a wolf chasing down an elk at Snow Lake, crossing the road 30 feet ahead of them, before the elk waded out into the lake and the chase ended.

The next day the four of us ended up getting a ride into Reserve from Mappy/Felix’s dad, and we ate at Ella’s Cafe with Felix and Heidi. Stuffing my face with hot, fresh food while hanging out with other hikers was so good. I had a green chile breakfast burrito with a side of hash browns and a cinnamon roll to pack out. Felix very kindly gave us a ride back to the trailhead, and we hiked with Wing It and Stoke to the top of Mangas Mountain, getting in a 20 mile day even with a town visit!

The next day we decided to nero and hang out at the Davila Ranch CDT Stop. Wing It and Stoke had really talked it up, and the Guthook comments mentioned beer and food. It had everything! I showered and put on clean clothes, then cooked a massive scramble with Stoke.

The hiker hunger has started to kick in, and I’ve been feeling very under-caloried. 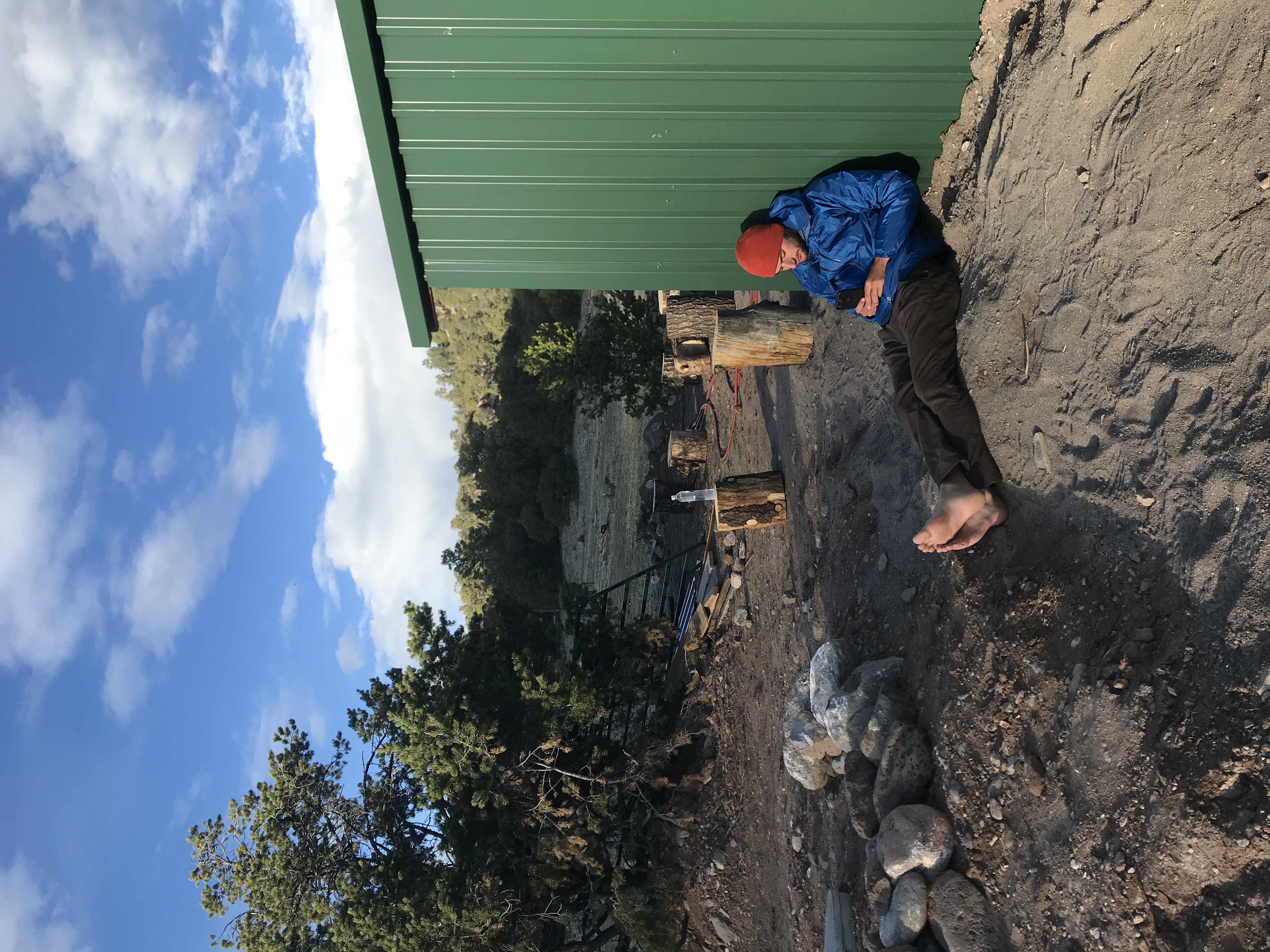 By late afternoon a bunch of other hikers had showed up. John, the owner, came by with more groceries and passed out beers into the evening. Wing It and Josh made a blazing fire, and John said he’s had to do all kinds of things to get hikers to make fires. He put a hose nearby, for confidence. And a fire ring of stones. Also for confidence. The dry piñon burned fast, and I stayed up late hanging out, eating a dinner of baked beans with ground beef from the ranch, and a second dinner of beanies and weenies.

We neroed again the next day into Pie Town and ate at the very hiker-friendly Good Pie Cafe. As they were closing up at 3, we were gifted some extra fries and two more slices of pie, in addition to the two we’d eaten and the two we got to pack out!

We got to eat the coconut cream, blackberry cream, pecan, pear crumble, and New Mexico apple pie, which has green chiles and pine nuts in it. They were really kind folks. 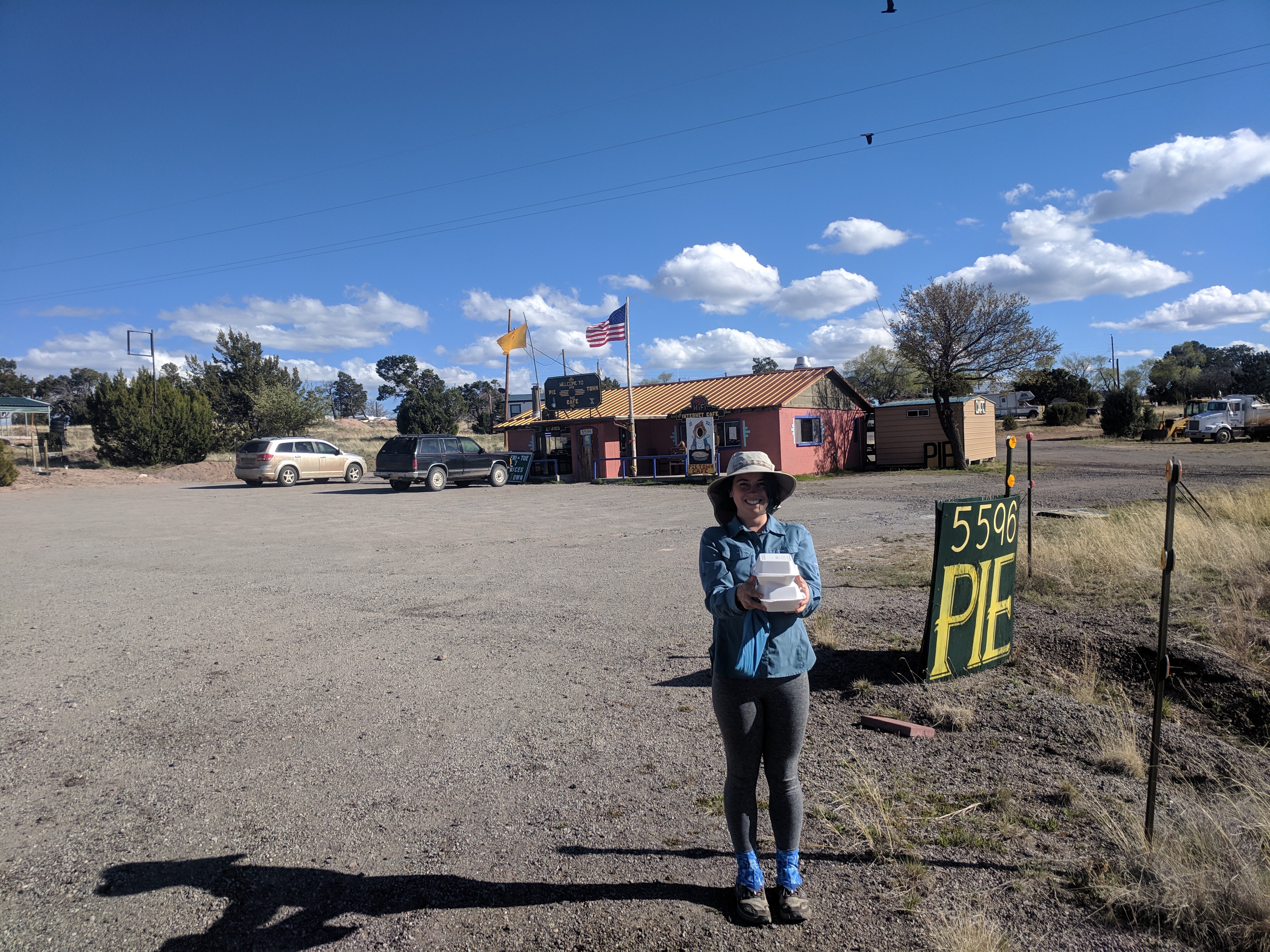 Josh and I stayed at the Toaster House, a house in town owned by a trail angel. With just hikers and bikers there to manage it on the day-to-day, it’s a really unique place. Most of the folks we’ve met on trail so far came through. I spent a couple of hours sitting around with Stoke, Two Slice, Pom Pom, and Josh, taking turns soaking our feet in a tub with Epsom salts. Stoke told us things about Zimbabwe from a book he found, and Two Slice talked about llamas, the horses of the future. This information was affirmed by a book I pulled off the shelf about the CDT in Wyoming, the author of which was a huge pack llama fan. We all got there too late to score rooms, so it was a hiker slumber party.