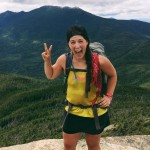 A Retrospective Update From the CDT: WYOMING

Walking through the state of Colorado was an adventure. A slow, consistent adventure. With snow and high elevation, the need to stop and take zero days to recover was something I took advantage of fully. I also played a lot in Colorado–rafting and floating down the local rivers, soaking in the local hot springs, etc…

I knew that arriving in Wyoming meant kicking the mileage up a notch and getting down to this thru-hiking business. If I was going to make it to Canada before cold weather and snow moved in, I was going to have to start really walking. This started out as an easy-ish feat, because arrival in Wyoming also means that you have arrived in the very flat Great Divide Basin. 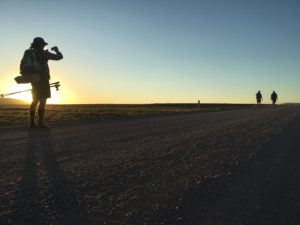 Heading into Wyoming meant a lot of road-walking, but it was also welcomed by Bandit, Karate Kid, Ledge, and myself for the easy miles!

Now, the Great Divide Basin is actually pretty cool. It is a closed or endorheic basin where none of the rain water that collects there drains to the Pacific or the Atlantic oceans (or any bodies of water for that matter). There are closed basins like this all over the world. The Great Salt Lake, in Utah (my home), is also a closed basin. The Great Divide Basin is unique in that it is found along the Continental Divide, and it was heavily traveled through by pioneers on the Oregon and California Trails which intersect here as well. 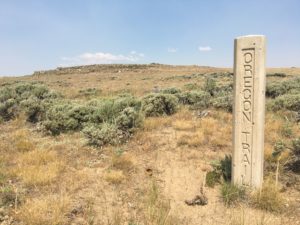 Geological and historical coolness aside, the Basin was pretty interesting to walk through. Like the boot heel of New Mexico, there was no shade. (Like really–if we found some sort of shade, it was found in the form of abnormally large sage bushes.) I acquired a $5 umbrella from Wal-Mart to create my own shade. But the water was even more disgusting then New Mexico. Double treatment with filtering and chemicals, plus adding flavoring to water did not get rid of the disgusting taste of cow shit that permeated almost every water source. 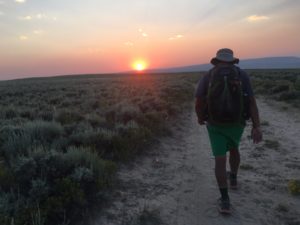 Ledge, walking into the sunset. It was common to walk till 9 or 9:30p every night in the Basin.

But I enjoy desert walking and was surprised at the amount of wildlife I saw in the Basin: wild horses, cattle (this was no surprise), snakes, rabbits, birds, pronghorn, deer, etc… It was so enjoyable to witness life flourishing in an otherwise lifeless landscape. Every morning we woke to the sunrise and we walked long after sunset. Absence of shade meant we took advantage of the time after sunset. 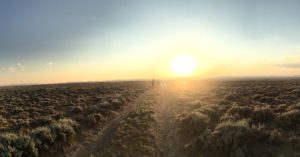 The Great Divide Basin seemed to have endless sunrises and sunsets.

And like I said before, we were also able to bust out huge mileage days through this area. We did 30+ miles everyday, and that got us through the Basin in good time and got us ready for the Wind River Range, an incredible mountain range we could see for days from the Basin. 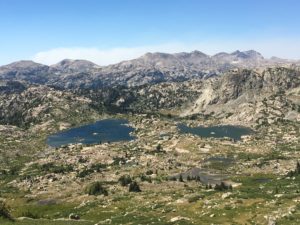 If you have never been to the Winds, I implore you, pack up your backpack, and for goodness sake bring your fishing pole, and go there. The stark contrast of walking from the Basin to the Winds was amazing. Lakes upon lakes upon lakes full of delicious trout (that we never got to eat because we were foolish and did not bring a fishing line with us). Granite peaks shooting out of the ground to form grand towers and valleys surrounded us at every turn (I’M NOT EXAGGERATING). 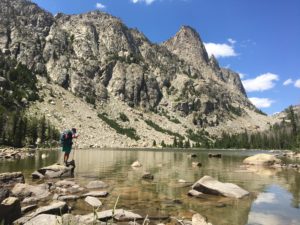 Our welcome into the Winds!

We went into the Winds prepared with food enough to go about 7 days. My pack hadn’t been that heavy since the San Juan Mountains! The 1.23 lbs of dehydrated marshmallows (think Lucky Charms with just the Charms) that a friend thought would be funny to send to me may have contributed to that. Really hilarious, Linda. 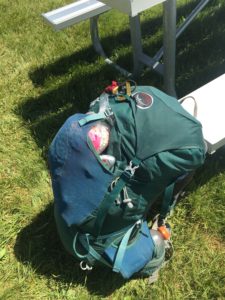 While in the Winds, we took the opportunity to veer off of the official CDT on two occasions. The first was to visit the Cirque of the Towers. To get there, you must climb up and over Jackass Pass. 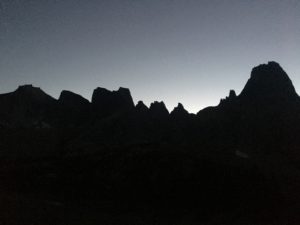 This was our twilight ascent up to Jackass Pass and down into the Cirque of the Towers.

We underestimated how our bodies would adjust to elevation and climbing again after spending so much time in southern Wyoming (aka, FLAT), and making it over that pass was HARD. 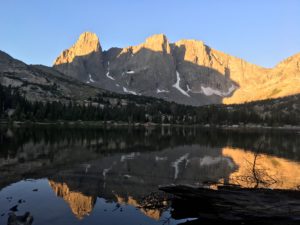 The Cirque of the Towers.

But it was so worth it. I woke up the morning of my 30th birthday in the shadow of Pingora Peak within the Cirque–a very popular destination for climbers and mountaineers, and it was well-worth the challenging climb in. 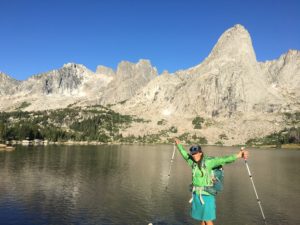 Happy 30th Birthday to me! No other place I’d rather be! Lonesome Lake and Pingora Peak in the background. 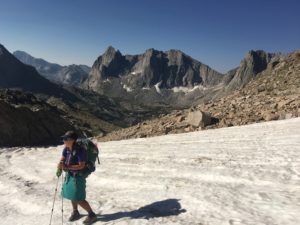 Climbing out of the Cirque.

The other alternate we took was to go through the Titcomb Basin, passing by Island Lake and Titcomb Lakes, to ascend up and over Knapsack Col–an amazing pass sitting at an elevation of over 12,000 ft. 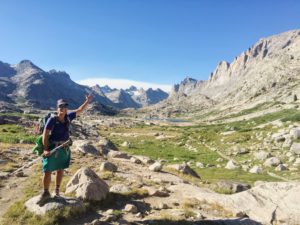 Climbing up and over house-sized boulders, ever-settling and moving because they are sitting on a melting glacier, was absolutely incredible and fun. I can’t express to you the grandeur I felt sitting on top of that pass. 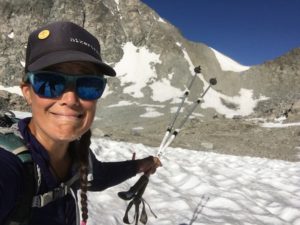 Anxiously taking in the steep boulder climb to Knapsack Col. 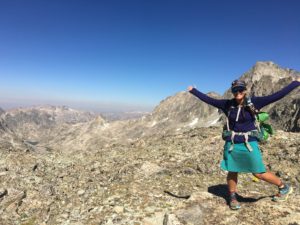 You could see the world from the top of Knapsack Col (elev. about 12,200 ft). Well-worth the climb.

The descent was equally magical as we came down to the lower lakes–we even took a second to jump into one of the glacially-fed lakes. Even though it was very warm, the water was ice-cold (DUH. #glaciers). 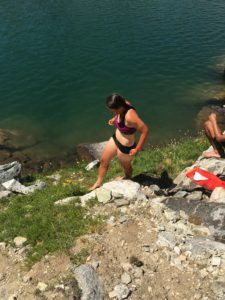 Jumping into this lake was literally breath-taking–I could not take a breath when I popped out of the water, it was so cold! 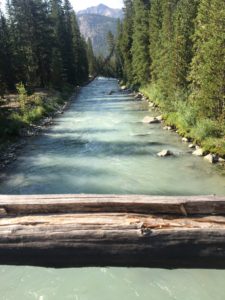 The beginning headwaters of the Green River.

We camped along the Green River Lakes in the shadow of Squaretop mountain. The weather was very hazy due to a nearby fire that threatened to take us off trail. Our timing worked out, and we were able follow the trail we planned on taking without having to deviate. 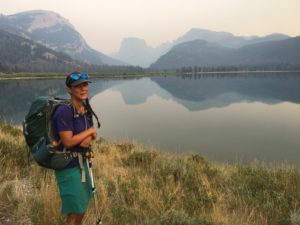 Green River Lakes. In the background, you can see Squaretop Mountain.. 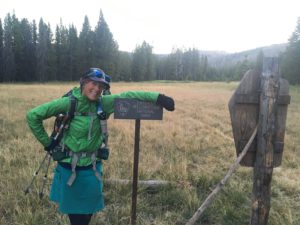 Heading into Yellowstone National Park, “we” became A LOT of thru-hikers. Suddenly, we were a bubble of about 12 CDT hikers, making our way through the backcountry of JellystoneNP (in honor of the original yogi: Yogi Bear). As our bubble of humans made our way through the Park, we started seeing “lots” of SoBos (like 6). I even ran into Simple Soul–who I hiked with for bit on the AT last year! Small world.

Jellystone is cool. You’ve probably been there–you’ve probably been through to Old Faithful, and all that jazz, and it’s incredible! But the problem I have with Jellystone is the the amount of human tourists that fill the more popular parts of the Park. The CDT goes directly through Old Faithful, and it is an extreme shock to the thru-hiker soul to all of a sudden be surrounded with hundreds of tourists, all staring and turning their noses when they see/smell you. 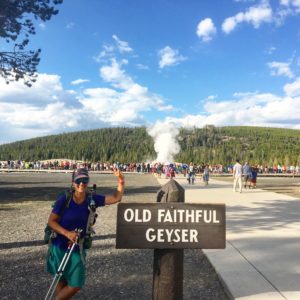 Old Faithful Village, quite a shock when you’re used to seeing NO ONE EVER.

I was thankful that most of my trekking through Jellystone was limited to the backcountry, where I got to enjoy amazing thermal features with zero tourists. I even got to visit a secret hot springs, and soak in its healing hot/cold water! 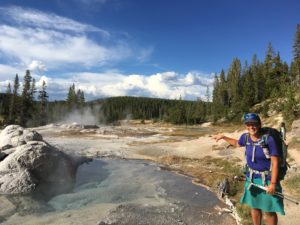 Backcountry thermal features and no tourists!

Leaving Jellystone also meant LEAVING WYOMING! I crossed the Wyoming/Idaho border, making it through the entire state of Wyoming in under 2 weeks. Talk about hauling ass! 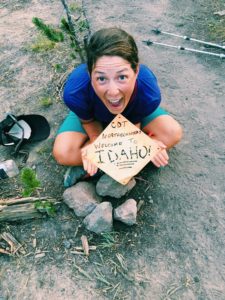 Excited to be in Idaho! 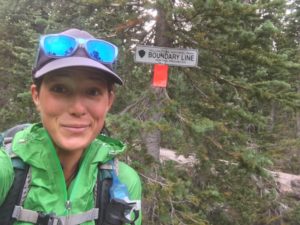 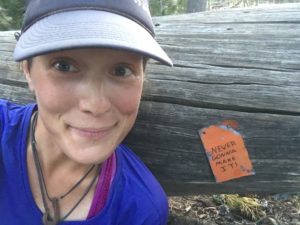 An ongoing joke on the CDT.

You can also check out my Instagram account if you want a taste of what I’ll be sharing, as well as my current adventures back home in Utah. Follow me, @kaytebrown!