A Zero in Lordsburg

Laundry and Resupply and a Surprise Zero, Oh My!

We arrived in Lordsburg early on April 5th, and we stopped by the EconoLodge to see Radar and collect some maps we had left with him. He was out doing a water run, so we made plans to see him later.

Then, we practically ran down the street to McDonald’s. My face is already starting to puff out as I begin to resemble a chipmunk. I’m pretty sure this has something to do with all the preservatives, sodium, and nitrates that are in the food we eat on the trail. I don’t usually inhale fast food, but there weren’t many choices in Lordsburg.

When we had finished eating, we headed to the post office to pick up a package, and then, we went to the Economy Inn located next to the railroad tracks because we’re on a budget. They let us check-in at 10:30 in the morning. The room was pretty bare bones but clean, and after five nights in the desert, all I wanted was a shower. 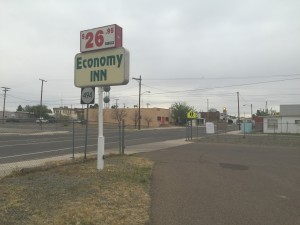 $31.50 with tax was the perfect price for us, and the people were super nice.

In the afternoon, we went to resupply and do laundry. As usual, everything seemed to take a really long time. I hadn’t slept great the night before, and I was feeling pretty tired and cranky. I didn’t want to walk back and forth across Lordsburg, and my stomach was starting to hurt. We both had blisters and sore feet.

We saw Carlos, who showed us where the laundromat was, but there was no one there, and the machine that gives you quarters was out of order, and we needed laundry detergent. We made a few attempts at locating the mysterious laundromat man, and then we headed back out and crossed paths with Radar. We all stood on the corner talking about the trail. We finally managed to get some change, bought detergent, and did our laundry. 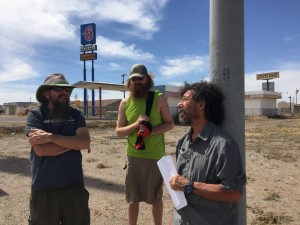 The next morning we packed our packs and prepared to leave, but as we walked across town to once again eat breakfast at McDonald’s, we started contemplating the idea of a zero. Our motel room was incredibly cheap, our blisters hurt, my knee kind of ached from my recent spill, and we were just tired. We met Pot & Lid on their way out of town, and they told us they had zeroed the previous day that was all we needed to hear. We went back to the motel, and we nursed our wounds, watched TV, and slept.

In the afternoon, we got a little stir crazy, and we walked around town. The town is pretty depressed, and seems to be just a stop on Route 10 between Tucson, Arizona and El Paso, Texas. There isn’t much happening. The people are incredibly nice, helpful, and supportive. There are lots of Border Patrol vehicles. 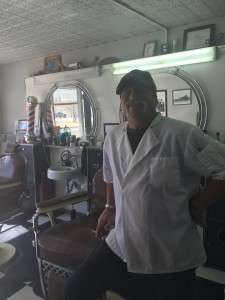 We did walk past an authentic barber shop, and we talked to the barber, a man named Mike, who looked like he belonged in Williamsburg. He showed us old pictures of Lordsburg when the town had a heyday before the interstate was built. Most of the sidewalks have stamps from the WPA in 1938. 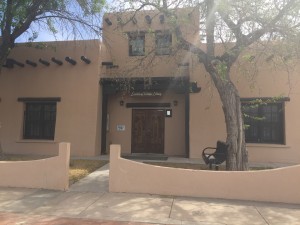 The public library in Lordsburg, NM.

We also spent some time at the library, and we met Indy and Art Gypsy. They also decided to zero after their trek through the desert. They suggested we eat at the El Charro Cafe, and we were not disappointed. I wish we had found the place earlier! The food was plentiful and delicious. I hadn’t eaten authentic Mexican food in years. 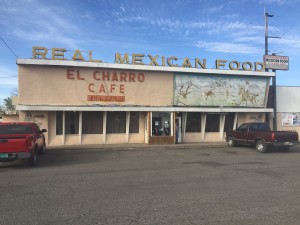 The next day we left early and headed towards Silver City.