To Anaconda! In Which I Accidentally, Temporarily, Steal a Puppy

Before leaving Helena, I went for a last lunch with Giggles and Josh at LaPa Grill. They serve all kinds of nontraditional burrito-like things. After a few minutes of tremendous indecision I decided to get the Angel Alfredo: chicken, croutons, Parmesan, alfredo pasta, and a dash of hot sauce in a tortilla. Carbs, carbs, and more carbs.

I packed it out for dinner that night on the trail. Definitely one of my best trail food decisions ever, maybe even better than the spaghetti and meatballs I packed out in a plastic bag one time. The croutons were crunchy, the alfredo was creamy, and it was deliciously spicy. Josh and I camped on a ridge off a gravel road.

The following morning was cloudy. The trail went up and over a rocky-topped rise. On the way down it started to drizzle, and then suddenly the sky began to pelt us with hail. I popped up my umbrella and hiked on.

The hail went on heavily for a few minutes, coating the ground in a chunky white layer.

I’ve never seen anything like it! It stuck around until the afternoon sun melted it all, puddles in the trail full of hail like pea soup, clusters hiding in the centers of bear grass tufts. 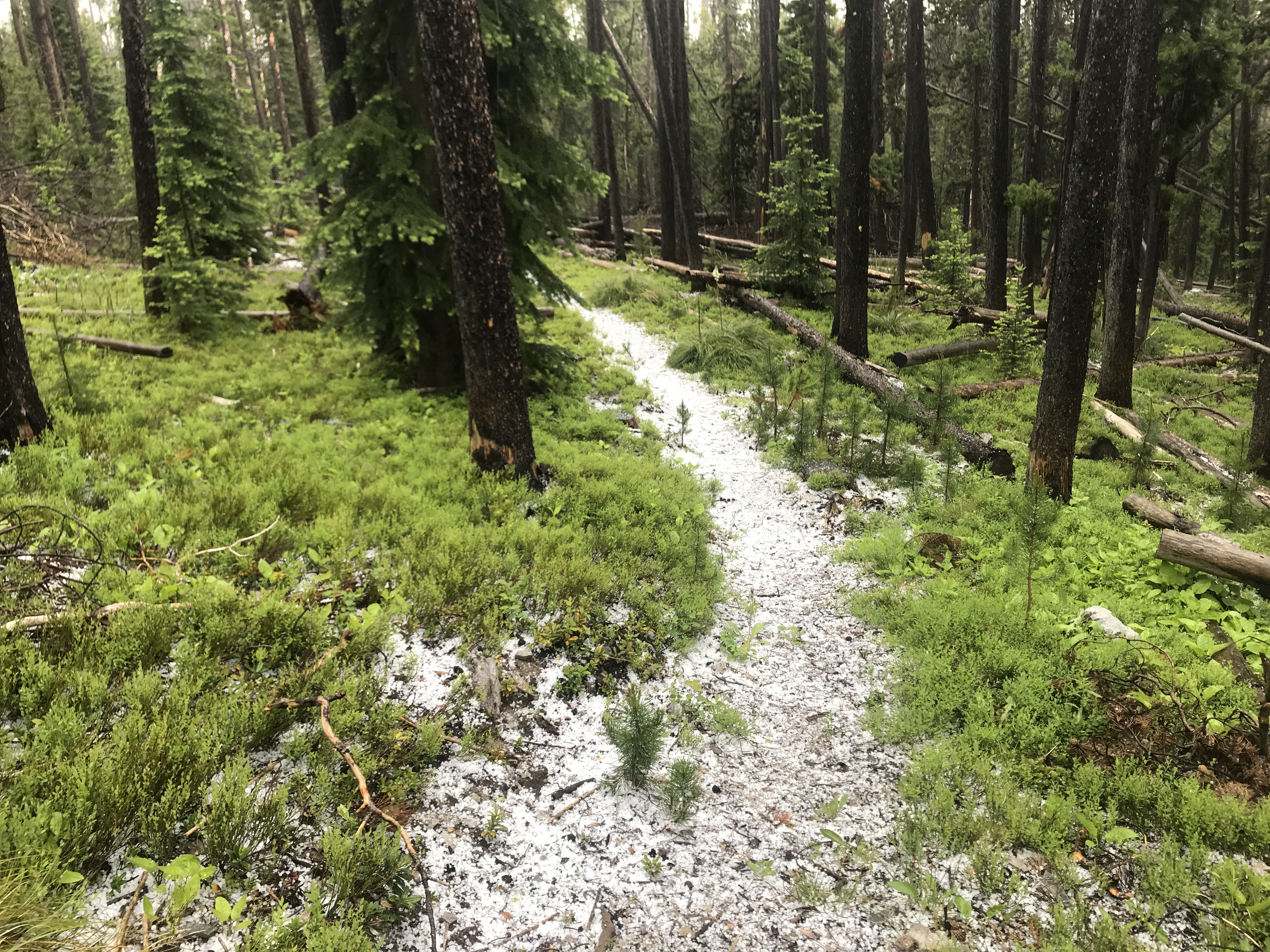 Josh and I hiked through several lodgepole pine forests where the tree trunks were all four to seven inches in diameter. The ground was carpeted in small bright-green currant plants. Some had tiny pink bell flowers. At times the plantscape became more diverse, with purple lupine and huge sprays of glorious blooming beargrass. It seemed like sections of the forest had been clear-cut in the past. One hillside was actively being logged, hulking machines sitting idle and quiet amid piles of bark-stripped logs, wood chips and torn up dirt all over. They were thinning the trees, though, not clear-cutting.

In the evening the trail went through a section that felt wild and quiet, like not many people ever went through, but every 20 feet there was a tree with a blaze cut into it.

You know those vertical dash-dot trail signs, cut into the bark of a tree? I think of it as an “i” for information, or an exclamation. It was like someone had been assigned to mark the trail but didn’t know what they were doing, their style and definition becoming more pronounced over a couple of miles. Then there were no more.

The next day Josh and I arrived at the junction between the Anaconda cut-off and the official trail, which goes toward Butte. We ate lunch and headed off down the dirt road toward Anaconda. The road went along a creek, with pink wild roses blooming, and only the occasional car. Josh and I soon remembered that it was the Fourth of July. People were out celebrating! After some discussion we concluded that we didn’t want to road walk into town on a holiday evening. Highway walks are scary enough without the additional likelihood of drunk drivers. 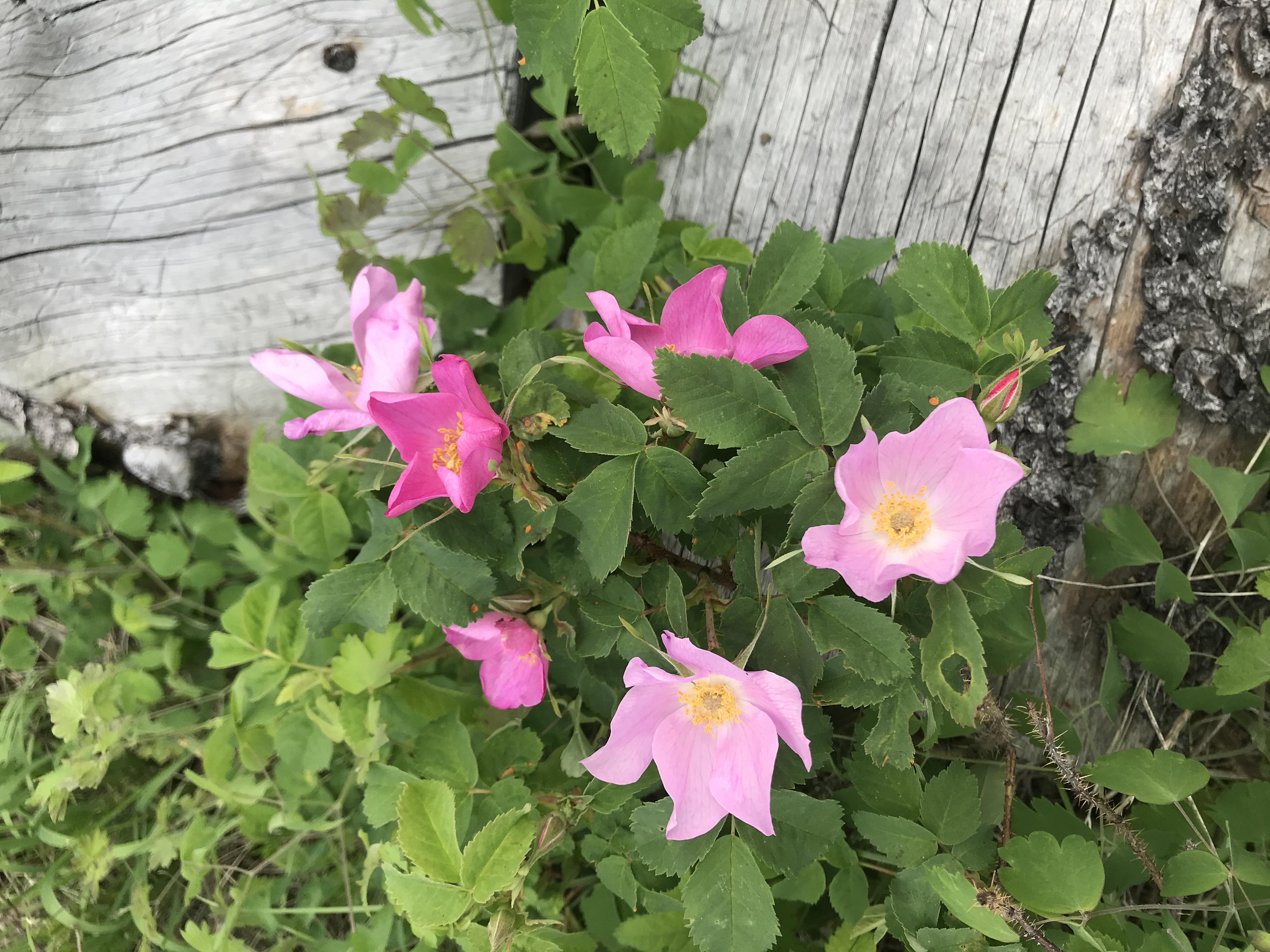 The road entered ranch land, and there was one huge property with several buildings, lots of machinery, and barking dogs. The dogs weren’t fenced and Josh and I soon had a pack trailing us. One came close to nipping me a couple of times before I managed to shoo it off.

When we got past the buildings most of the dogs gave up the chase, except for a corgi and an adorable black puppy, who I knelt down and played with for a couple of minutes.

The puppy started following us down the road. We got to a cattle guard, where I thought it would give up, but it ran right over and started chasing some sheep on the other side! I decided to ignore it in the hope that it would go home. This puppy, however, had no intention of ending its grand adventure. It followed us for about a mile, and I debated the whole time whether I should march it back to the property it came from. A buggy came down the road and I flagged it down. After a brief introduction, yes I’m hiking, it’s called the Continental Divide Trail, I asked if they would take the dog back. The two people in the buggy agreed and I handed over the wriggling pup. Mission accomplished! It sure was cute, though.

To avoid the final few highway miles into Anaconda, Josh and I went to check out a ranch that supposedly offered camping and showers. The guy running the “Hiker Haven” lived in a trailer on a larger property. He said he had been brought on to help manage wildlife on the ranch. He runs hunting trips to keep the elk population in check, and mentioned noticing wolf kills a couple of years ago. At least you can hunt them now, he said.

Josh and I set up our tent on the grass, showered, and ate an early dinner.

I fell asleep hearing fireworks in the distance.

In the morning we walked the last few miles into Anaconda, all on roads, past a city park and protected wetlands. I saw a poster about birds of the west and was finally able to identify a mysterious bright yellow, eye-catching fellow I’d seen. The Western Tanager! I like learning the names of the animals, plants, and mountains I meet. Exchanging names is the beginning of most relationships, after all.

While in Anaconda, Josh and I spent some time at the Hiker Hut in the park. Anaconda became a CDT Gateway Community earlier this summer, and it seems like folks in the town have done a lot of organizing to help ensure hikers get what they need when they come through. I had a little bit of a fangirl moment when I opened the trail register and signed my name below that of Teresa Martinez, who had been in town for a dedication event. She’s the executive director of the CDTC, and has been doing great work on the behalf of the trail’s landscapes and communities.

In the evening, Josh and I ran into Catwater, a hiker we hadn’t seen since Pie Town! We had dinner and beers together, catching up on how our hikes had been. I ordered the chocolate cake for dessert, and it was actually such a large slice that I packed out half of it to eat the next day on trail.

No kidding. I think the cake itself must have been eight inches tall.

We resupplied at Stokes Market after dinner. I was tipsy after drinking two beers and the evening was warm, the sun set late, we would hike again tomorrow. 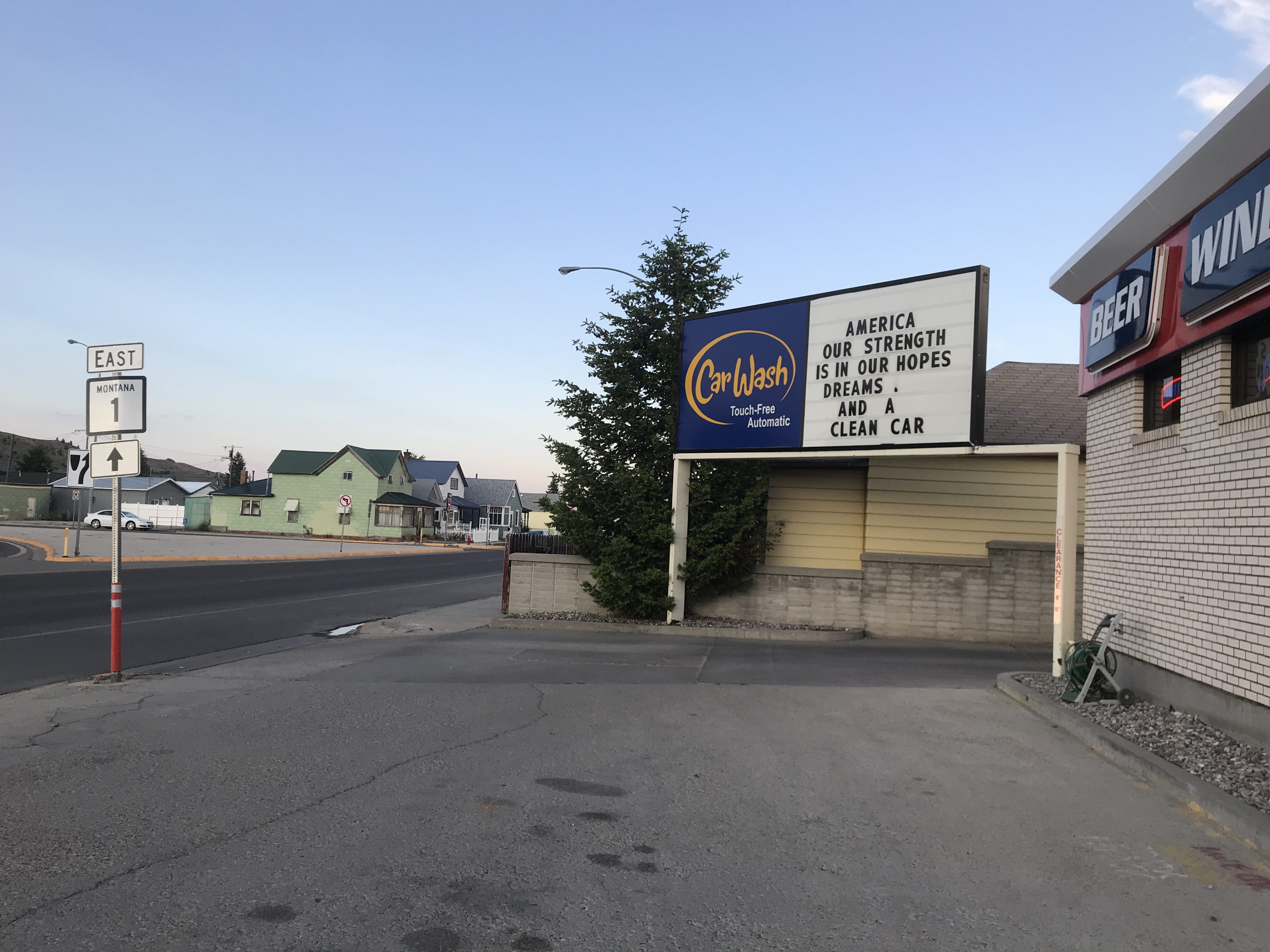