Avalanche Danger and Staying Safe on the CDT in 2019

Due to increased snowpack and avalanche danger this year, the Continental Divide Trail Coalition (CDTC) is encouraging all CDT hikers (thru-hikers and otherwise) to be extra cautious on the trail. Unlike a thru-hike of the Appalachian Trail or the even the Pacific Crest Trail, there’s a strong likelihood that CDT thru-hikers will be forced to take time off or reroute their hike based on snowpack and other unsafe conditions. They are asking that hikers avoid risky situations that put the lives of themselves and rescuers at risk.

We chatted with CDTC Community Outreach Specialist Andrea Kurth and CDTC Executive Director Teresa Martinez for more information on current CDT conditions, how to stay safe, and what a reroute plan might look like.

What makes this snowpack different than snowpack in other parts of the country?

Teresa Martinez: The Continental Divide has a different type of snowpack because of colder temperatures and the several days or more between storms. The Rockies experience variable weather in the spring, with snow happening late in the season yet warm temperatures in between. This combination creates unstable layers in the snowpack. In addition, the snowpack becomes more unstable with warmer days that happen in the spring and early summer.

What is dangerous about this year in particular?

TM: While snow levels in Montana and Wyoming are about normal, in Colorado, the snowpack is between 141 and 374 % of normal levels as of May 24. In the southwest corner of the state—the Gunnison, Rio Grande, and San Juan River basins—the levels are between 300 and 375 % of average. Additionally, we’ve gotten several large snowstorms late in the season, which are depositing new snow on top of weak layers.

What are the worst places on the CDT right now? The top places to be aware of?

TM: The CDT is covered in snow from Hopewell Lake in Northern New Mexico to the Great Basin of Wyoming. Anything below 9,500 feet should be approachable come mid-June. In addition to huge amounts of snow in Colorado, we’re aware of at least two places where avalanche debris has covered the CDT. Hikers will have to navigate over avalanche pathways in at least these two places, if not more.

What timing strategy do you recommend CDT hikers use to stay safe?

TM: In normal years, we recommend that thru-hikers begin their CDT hike at the end of April, unless they’re planning to take up to a month off at Ghost Ranch. With a late April start, and a slow five to six weeks to Cumbres pass, hikers should be arriving at Cumbres Pass in mid-June, which is when the snowpack will start to stabilize on average  years. There will still be snow in the mountains of Colorado in mid-June, but it will be easier to consistently walk, albeit with lower-mileage days because of the difficulties of snow travel. With the high levels of snow this year, we suggest hikers start even later to avoid dangerous conditions in the high country.

How can hikers stay safe? What does timing have to do with this?

TM: Hikers should have the proper equipment and practice using it before getting on the CDT. Snowshoes are only helpful if the snowpack supports you; sometimes travel at night is necessary, so hikers should know how to navigate the trail in the dark. There’s also the danger of punching through the snow and becoming injured by something unseen. Thru-hikers should be prepared to take two to three weeks off, or flip up on the trail.

When traveling in the snow, it’s safer to go in a group. If hikers run into trouble or are traversing avalanche terrain, there will be others there to help if something goes wrong. We advise hikers to bring equipment like a stove for warmth, because it’s not likely there will be dry wood. Hikers should also prepare with two to three days of extra food, and add high-fat, high-calorie items into their diet. Yes, it’s heavier, but if needed it can prevent hypothermia. Additionally, they should bring warm gear, including an insulated sleeping pad, so that they don’t lose all of their heat to camping on snow.

Hikers should also recognize avalanche terrain and avoid camping in avalanche chutes. Most of all, hikers should make thoughtful decisions and remember that weather reports in the mountains are only reliable two to three days out, and weather can change rapidly at high elevations like in the San Juans and Weminuche Wilderness.

How to Travel Over Snow on the CDT This Spring 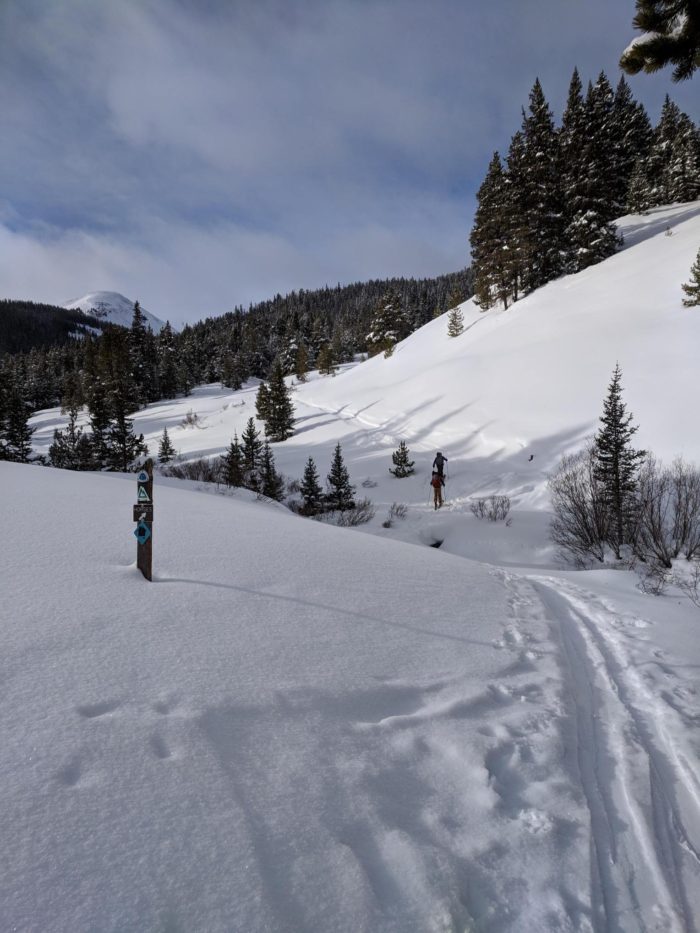 The following post was written by Mike Henrick and originally appeared here. It has been reposted with permission from the author and publisher.

Thru-hiking the CDT in the spring can often become a mountaineering trip instead of a backpacking trip. In 2019, states along the Continental Divide saw above-average snowfall, with much of Colorado seeing over 150% of the normal snowfall, and the San Juans seeing nearly 225% of their normal snowfall. Hiking in spring conditions—when many alpine areas still have yet to start melting—requires preparation and knowledge of snow safety.

Many thru-hikers will be veterans of other trails like the PCT, which also can feature spring snow travel. However, the Rockies feature a Continental snowpack, while the Sierra have a coastal snowpack. Continental snowpacks are much weaker due to colder temperatures and an overall thinner snowpack. This means postholing is much more common on the CDT and so are avalanches which are rare on “Sierra cement” (what skiers commonly call the Sierra snowpack). Far fewer hikers on the CDT compared to the PCT also means no trench in the snow to make travel safer and easier.

That said, travel on the CDT in early spring is certainly not impossible, it just requires special skills and equipment and will be an adventure unlike any other. Going out without those skills or equipment puts you and potential rescuers at risk. In high snow years like 2019, you should avoid traveling north of Chama unless you are able to do the following.

Recognize avalanche terrain and how to avoid it. Colorado has already had half a dozen avalanche deaths this year. New snow will be unstable and prone to wet slides as it heats up for the first few times. Avalanche deaths still happen in May—this is not Sierra snow, but rather a snowpack that is much weaker and more slide-prone. Avalanches are common in spring after snowfall events and when overnight temperatures are too warm to freeze the snow. Wind can drift as little as six inches of snow into hard slabs that may not bond well with the ice crust below. Alternatively, when the snow doesn’t freeze you will posthole—even in snowshoes. You should avoid traveling on or under terrain that is over 25 degrees in steepness when you’re sinking past your calves while wearing just boots. See this link to estimate slope angles with your hiking poles. Often to avoid avalanche terrain, the safest place is the crest of ridgelines, but that can force you into rock scrambling that many hikers won’t feel safe doing without a climbing rope, harness, and protective gear.

Be able to travel and camp on snow. Assuming a solid freeze overnight you can travel efficiently early in the morning (predawn!) and on shaded slopes, but you will be thigh deep postholing by the afternoons. Steep icy slopes will be common and mean a fall will result in an uncontrolled slide, so you need to have an ice axe, crampons, and the ability to use them and you must know when to use them. Snow will be continuous above 10,000 to 11,000 feet depending on aspect and much of the CDT stays above 11,000 feet in the San Juans. You will likely get stuck camping on four-plus feet of snow, so either carry a shovel to dig to the ground or an extra sleeping pad to insulate from the snow. Expect nighttime temps in the teens or lower. You’ll also want to carry snowshoes to extend the time you are able to travel on snow as the day warms. When the snow can no longer support your weight on snowshoes, it’s probably time to call it quits and hope for a solid freeze overnight. Without that freeze, avalanches become more likely and travel almost impossible—best to take a low-elevation alternative. Speaking of which, the sun at 11,000 feet is strong, but the sun at 11,000 feet reflected off the snow is twice as strong. Carry dark sunglasses, cover up, and use sunscreen.

Be willing to bail and have the navigation aids to do so. Spring storms like the one in late April of 2019 that dumped 24+ inches over two days can still happen throughout May. In fact, the biggest snow years gain a lot of their snow in May. Weather prediction in this state is not reliable more than three to four days out, so you need to be willing to bail to a lower route and have overview maps showing those routes. There are lots of Forest Service roads below 10,000 feet that will still be scenic and a rewarding hike while avoiding most of the snow.

Tell people where you are going, for how long, and what to do if you don’t show up. When someone goes missing and no one knows until weeks later, the search for them becomes next to impossible, as they could be anywhere over hundreds of trail miles. Piecing together where they likely are becomes much harder. Ideally, carry an emergency beacon and check in at breaks and camp but DO NOT ASSUME THIS MAKES YOU SAFE! Beacons can malfunction or get misplaced and you must be conscious to use them. Even with a beacon, rescue can be delayed for days by bad weather or avalanche conditions. If you are in an emergency situation, you should determine whether you can self rescue or bail—or if the beacon is really necessary. Rural counties have limited resources spread over large service areas, so an unnecessary helicopter flight may prevent someone else from getting aid. If self-rescue is not an option do not worry about the cost of rescue—it’s covered by county sheriffs’ offices in Colorado. If you want to help ensure no one goes without a rescue because of cash-strapped county sheriffs you can purchase a CORSAR card here.

For more information on how to choose routes and travel in avalanche terrain,  check out CDTC volunteer Mary Stuever’s avalanche safety video.

Colorado Avalanche Information Center, NRCS Snotel Data, NOAA for weather, and folks can call the CDTC office for updated conditions. If you’re interested in supporting local search and rescue efforts, donations can be made to New Mexico Search and Rescue Council or by buying a Colorado Outdoor Recreation Search and Rescue Card.

May 25th : The Editors
Author Page
The Editors's Bio