April 30.  This day was unique for the gathering of water from a windmill site, and hiking by a herd of cattle in their open range.

It took me a while to pack everything up in the morning. The routine is not automatic yet.  I got started, immediately aware of the day warming, the sun’s rays low enough in the sky to hit my face under my hat.

The trail followed a dirt road along a range of desert mountains for a few miles, then swung out to a windmill.  It looked like the water was pumped via solar power currently, no functional windmill blades turning.  A cow pond sat below the windmill, cow patties covering the dry land all around.  A spigot- my water source- drained into the cow pond.  Thankfully I didn’t have to draw directly from the pond. 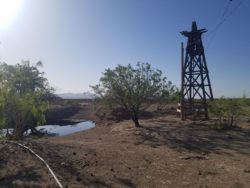 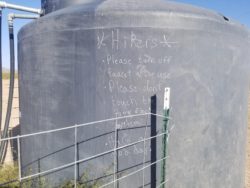 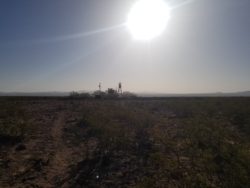 Later, I watched my second jackrabbit run away through the creosote.  Any life or movement was remarkable to see.  Keep surviving, rabbit!

After breakfast and refilling my water bottles, I started a long slog through white bright afternoon heat.  Listening to my audio book pulled me away from my own discomfort for a few miles.

Though, heat or no, the views continued to draw me in, wandering and wondering at the distance, time, space.

How quickly things faded away.  Within a half hour of walking, the windmill turned to toy-size amid the vast sea of landscape behind.

And I could see so far, the land evanescing far, far away, into a blue haze.  Have I ever seen a landscape stretch out so far, before?  No mountains, no hills, no man-made interruptions.  Desert, sand, occasional creatures.

In the afternoon, I hiked by two cattle herds, dark cows and bulls, one bellowing.  Just me and the cows out here.  Fortunately the herd was unaggressive, either moving further away or stopping to stare, stare, size me up, as I paused, then walked on by.

May 1.  This morning woke up at my pretty site, started hiking.  Kept looking back behind, at the landscape I’d camped in, the rolling hills topped with rock- buttes.  Unique features in the open scenery to mark where I’d been.

During one of these moments, when I was just standing and looking, I caught sight of three figures moving across the landscape towards me, and soon could hear their constant chatter.  The “three retirees” they call themselves, laughing, or “the AARP club”.  They passed me, then I caught up to them at the next water cache.

I observed that some of the mesquite bushes had lost leaves in the past miles, I couldn’t believe it, surely that was a sign it was extremely hot and dry!  Even the native flora withering.  I was told that a geologist hiker ahead had said the same, looking at the landscape to come, the flora there.

One hiker told us that his thermometer attached to his pack said “110” yesterday, could that be right?  Someone said calmly, that’s in the sun.  Well, we are in the sun all the time, what are you getting at?  I wondered. Maybe a joke.  I thought about how my chocolate chips melt into liquid during the day, and it takes all night for them to re-solidify lately. 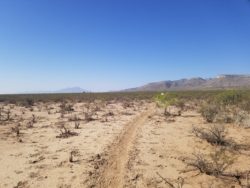 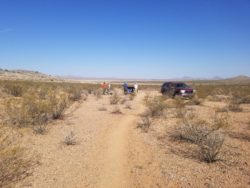 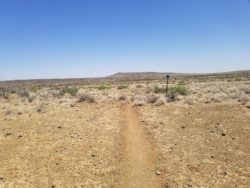 One man pointed to Pyramid Peak, a high and pointed mountain, that he said was our destination ahead, across a wide swath of white/yellow desert.  It was nice to have that visible target to measure distance for the rest of the day.

I filled up on water, then started the long trek across the sparse land, for the next several hours.  I took breaks frequently, marvel-laughing at how sparse the shade opportunities were.  It was well worth it to cut off the trail to a visible tree in the distance, flop down on a sleeping mat in the shade, then sink into a stupor for 20 minutes before reviving to eat and drink.  I was glad at times that I was hiking alone, and the trail was sparsely populated, so I could just completely relax and fall into these stuporous sleeps every few hours, without feeling self-conscious.

A hiker a few days ago had mentioned a tree ahead, “There’s a tree three miles ahead!”  And sometimes my map app on my phone included comments other hikers had made, noting locations of trees along the way.  What a place, a land where trees are something to be aimed for, recommended, hiked to.

I started hiking again, soon to crawl under another barbed wire fence, holding the cattle within a certain range.  The trail often passes across these fence lines, requiring a pack removal and belly crawl underneath.  Something unique to this trail, a part of being out here in this range land, but if you’re not in the mood, it can feel like a momentum killer.

I thought about hiking with the retirees briefly, earlier in the day.  One of them had approached a barbed wire fence, with me close behind.  There was no obvious place to cross, and we wanted a quick answer, standing in the heat.  I wordlessly hiked down the fence line for a minute, heave-tossed my pack over, crawled under, no hesitation.  The other hiker had asked if he could follow me(“Sure”), and started to, but then seemed to get over another way.  Maybe an easier way- I didn’t stand around looking too long.

I continue to be careful of the way I carry myself out here, around some of these hikers.  Being respected and viewed as a capable female hiker is so important.  In this case I didn’t want anyone advising me on the way to go, when there was no obvious clear-cut way, or to wait for the other hiker to decide and lead, under that hot sun.  Plus it was pretty satisfying to hurl the pack over the fencing. 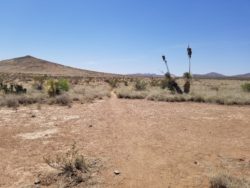 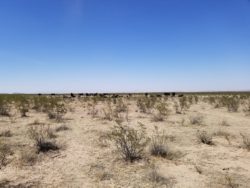 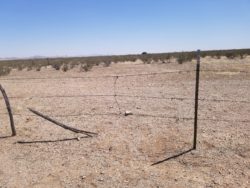 In the afternoon I watched small tornadoes of dust whirling across the desert in the distance.  Neat to be able to see the wind, in a sense, traced by the grit.  Glad I wasn’t struck by one of those swirls, all that whirling grit.

By day’s end, hiked up out of the flat plain and wound around the steep sides of Pyramid Peak.  It was satisfying to reach the peak, after hiking toward it all day.

May 3.  This morning the trail ascended desert hills to a well.  Soft sandy road ascent- I was really aching by the time I got there.  I sat under the shade of a grove of oaks there, where another hiker rested.

This hiker from a European country.  He said things that made me laugh loudly, like that he likes people more when his interactions with them are spaced out. And that this trail is too crowded.  I enjoyed talking with him.  He had interesting things to say about current events, and some thoughtful life observations.

We hiked the next few miles and took another break together.  A lot of time was spent talking about American culture and politics.  I felt a bit like an ignorant ethnocentric human, asking him if he’d known anything about American politics before he first traveled here.  He said Europeans know American culture, politics, because America affects the rest of the world.

Later he told me that to say “I still need to figure out what I want to do” is an inadequate expression, a language failure, that just being present is the key.  We talked a while about careers, purpose, the work-life balance act. 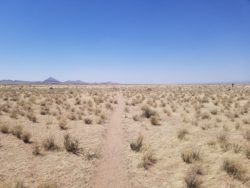 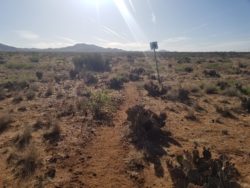 After an afternoon break, I started back to hiking earlier than he did, then hiked the afternoon alone.  The trail blessedly crossed over tree-covered desert hills – winding among scrub oak, junipers, pines, tall grasses, much more abundant shade patches.  I walked and mulled over this hiker’s words, what I agreed with, what I wondered more about, and how much I appreciate meeting hikers and locals along the way, of different countries, vocations, backgrounds, opinions.  It’s been said by many before, but, to meet someone and talk with them out in this earthy environment, free of distractions, both of you tired, dirty, is many times a true gift, an opportunity to see someone more humbly and openly than in other faster-paced settings.  I continue to appreciate the community and connections out here.