The Continental Divide Trail, or Righting the Wrongs of the Past……..

The Wrongs of the Past……

Hi, Ronin here, and it’s been awhile. When we last met I had just discontinued my thru-hike of the Appalachian trail. Needless to say, I should have gone with my initial instinct and hiked the Continental Divide Trail.  In my defense, the whole thing played out differently in my head. The AT was the most convenient option, requiring the least amount of prep work. I made a mistake.  Jumping forward to home turf for Vermont and New Hampshire, otherwise known as the parts of the trail with views, was my version of cherry picking. Sarcasm aside, the only way I will return to finish the AT is if it is necessary to complete a Triple Crown.  The AT was not the trail for me; there was some drama, but ultimately the breakup was amicable.  Breaking up is hard to do, but is often the healthiest available option.  At the risk of turning this into a therapy session on the merits of letting go of the past and moving forward, I’m letting go of the past and moving forward.  Bring on my CDT thru-hike!!

What Not to Do in a New Relationship

In the Relationship 101 class, we are taught that one of the best ways to doom a relationship is to constantly compare your current paramour to a previous one. I failed Relationship 101 (it was only an elective!). During my last thru-hike, I continuously compared the AT to the PCT. And the AT was left wanting. Poor AT, there was truly no way to live up to ones first love. The AT never had a chance! The poor dear just wasn’t appreciated for its subtle beauty and urban convenience, but paled in comparison to the remote, broad vistas and rugged wilderness of the PCT. I’m not proud, but the PCT was just so damn beautiful!  The superficial bitch that I am, I swiped right on one and left on the other! That being said, I am determine to not ruin this new hike by living in the past, but love an appreciate it for its unique qualities and beauty. 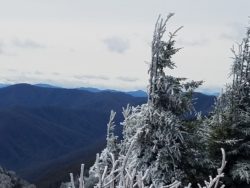 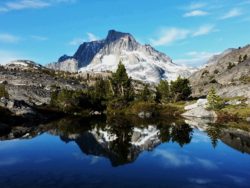 So, Who Is This New Love in My Life?

There is nothing like the feeling you get at the beginning of a new relationship. Everything is perfect, just the very thought of them gets your heart beating fast. The reality of  bad breath, body odor, snow, scorpions, snakes and bears hasn’t set in yet. On a purely superficial level, this trail is the super model of long trails. 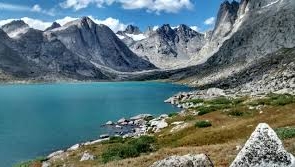 The Continental Divide Trail is approximately 3,100 miles through the backcountry of New Mexico, Colorado, Wyoming, Idaho, and Montana. One of three long trails in the US, the combination of which is considered the Triple Crown of thru-hiking. Being the longest of the three, and by all accounts the most remote, the CDT is generally not done first. However, since the concept of the Triple Crown has grown, so has the popularity of the CDT. Route finding on the CDT has always been considered challenging, and in fact there are several variations. Most people consider a continuous line from Mexico to Canada (or vise versa) a thru-hike. However, last year there was a push to tag the whole trail. This was complete with the support of hundreds of volunteers. Though variations do still exist, as of this year, the entirety of the CDT can be followed by trail markers. 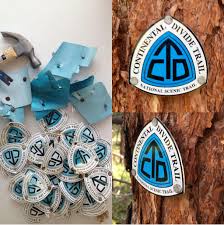 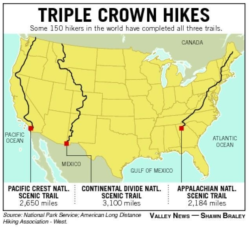 The only thing left to do now is get on and complete the trail before its popularity makes it unbearable. This is a true fact. Thru-hiking has risen in popularity in the last five years. The AT was always a popular trail, but since that little book and movie called Wild, the PCT became increasingly popular.  That year had a record number of thru-hikers and the numbers have only increased since then.  Last year more people applied for a PCT permit than the AT, a first! Thank God I hiked the PCT in 2015. The CDT, which usually has a fraction of the numbers attributed to the PCT and AT, has seen its volume increase as well since the popularity of attaining the Triple Crown of long trails. 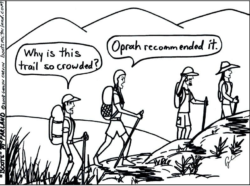 So here I am ready to embark on yet another great adventure. Prep for the CDT is a far more extensive endeavor than for the AT.

Even though the trail was tagged last year, you really have to have your head on straight and maps in hand to make it on this trail. Wandering aimlessly through the desert landscape is far more romantic in the movies than in the real world. With all the snow in the Rocky Mountains this year, having an app on your phone capable of keeping you on track, when there is virtually no track to follow, is very prudent.

There are resupply plans and packages to be wrapped stacked and packed. For the PCT, 100% of my food came from resupply boxes. Conversely, for the AT, 100% of my food came from shopping on the fly in towns along the trail.  This time around I will be employing a hybrid approach. Two-thirds of the food I eat will be sent from home by my faithful assistant, the most excellent Mother Huber, aka the Momster. The rest I will buy as I pass through towns. This, of course, has led to the unfortunate availability of unhealthy food in the house this past month. Seriously, only a thru-hiker can get away with eating Peanut Butter M&M’s, chocolate-covered almonds, Mike & Ike, and a myriad of other assorted treats all in the same day. Due to my complete and utter lack of self-control, this type of food is not what I usually allow in the house. Yeah, to say I’ve bulked up for this trip is an understatement.

The house needs to be cleaned, I cannot adequately stress how much it needs to be cleaned. Luckily for me, my trusty assistant and Momster extraordinaire is coming up north from MA to help clean the house. Let’s be honest; spring cleaning is an endeavor best performed under the influence of peer pressure.

There is spring yard work as well. Of course, New Hampshire had a record winter for snow, so I didn’t actually see my yard until just last week. Then there was the matter of warm temps, rain and the inevitable melt-off, which lead to flooding.

All this put a bit of a damper on all the things I wanted to get done to prevent my yard from overtaking the property. My solution: wildflower seeds, a veritable shit ton of wildflower seeds. Yeah, they are going everywhere in the back yard. If I am going to have out-of-control foliage growth in my backyard over the next four or so months, I want to come home to blooms!

Gotta finish up all those games before deleting that damn app off my phone. Part of the allure of a thru-hike is getting away from the world, and nothing impedes that more than playing on your phone. It had been turning into a bit of an obsession as of late anyway and an intervention was due.

But let’s be clear: I will be watching Game of Thrones.

Another overnight, then taking the shuttle three hours to the trail-head at Crazy Cook right on the Mexican border.

Seriously, the amount of cost and effort and time it takes to get to the CDT trail-head tells you all you need to know about this trail.

Remote, aloof, rugged, or as the CDT catchphrase goes: EMBRACE THE BRUTALITY!

Peace out and I’ll keep you posted!

Don’t forget to stop and smell the roses. If you can’t find any, go to my backyard; it should be blooming by July!