June 2.  I headed back to the trail from Pagosa Springs this morning.  I had spent several days in town, recovering from my hike through the southern San Juans.  I was unsure what to expect in the miles ahead, but hopeful about my plan.  I would hike on the CDT for the first day, then cut down to lower elevations on an alternate route called the “Creede Cutoff”, which cut through the town of Creede and cut out a chunk of ongoing miles through the San Juans.

The trail was too far from Pagosa Springs to easily walk back to it.  After 20 minutes of attempting to hitch-hike, a forest service vehicle pulled over, and a kind forest service employee picked me up.  He was knowledgeable and passionate, telling me that part of his work is trying to save some of the spruce, firs and pines from bark beetles, in specific areas.

So many of the spruce, firs and pines in this area are dead or dying from the pine bark beetles, all you see is brown trunks in many places.  I asked him what these mountains will look like in the future, and he told me the forest will gradually transition to aspen forest.  The aspens love light, and they will spring up quickly as the conifers die, then provide the shade needed for the conifers to grow again.  It’s a slow cycle.

It was inspiring to meet someone caring for this land, who could provide more of a context for the area I’ve been hiking through. 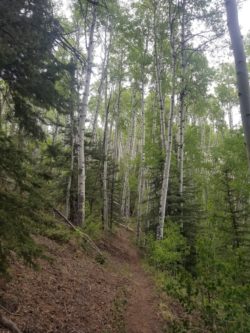 Back on trail, I was relieved not to pass anything more dramatic than a few snow patches.  I post-holed/ unexpectedly sank into one drift up to my hip, breaking the fall with a trekking pole.  The pole bent, though remained functional.  For weeks since, it’s been only a matter of time for a new hiker to ask me what happened with the pole, and they nod understandingly when I say “post-holed”.

All day I looked closely at the tread and slope of the trail, comparing it to sections of trail that had scared me in past miles.  The path looked so much better, more secure, over these miles.  I took a picture of rocks propping up a trail edge somewhere, good trail maintenance.

I see trail maintenance in a whole new, nobler, light now.  In some places, a well-maintained path is a nice convenience, while in other places, it truly enhances the safety for all the hikers passing by.  Well-placed rock steps can provide much safer footing than an eroding scree slope.  I’m thankful for all the work trail volunteers have done and continue to do on these hiking paths. 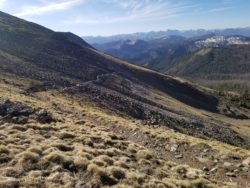 At the end of the day, in my tent, I pulled out my map of the CDT in its entirety.  The elevation profile is a ragged saw blade often breaking or maintaining at 12000 feet+ in Colorado, but diminishes to lower altitudes, beyond Colorado.  Though it’s a long way away, I was encouraged to imagine a limit to the higher elevation hiking.

I watched three elk graze nearby, then leap away on stiff legs, as if jumping on pogo sticks.  It’s always a highlight to see something like that out here.

June 3.  After climbing up one pass by Archuleta Lake, I came to the turn for the Creede Cutoff.  After an initial bushwack down a loose dirt mountainside, I hiked by forests of aspen, followed a river, noted pretty canyon walls.  Later, a meadow with yellow grasses, and not so windy down here. 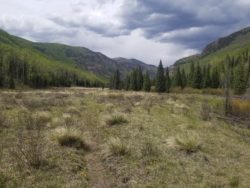 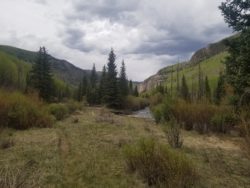 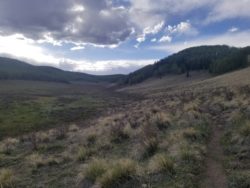 I took a nap mid-day.  I felt like I could finally relax, down in meadow grass, by a river.  The day turned overcast, and I felt relieved, thinking about how much less of a threat a thunderstorm is, when I can pitch a tent among tree cover down here, versus being up in exposed land.

Hiking this cutoff for a few days was a much needed respite to what I most appreciate about backpacking: peace and beauty.

June 5.  I camped by a creek heavy with beaver dams last night.  I heard beaver tails slap the water throughout the evening.

The Creede Cutoff re-joined the CDT this morning.  Back on the CDT, within a few miles I approached San Luis Peak, one of the many 14000 foot mountains, or “14ers” in Colorado.

Trail around 14ers tends to be more crowded with day hikers attempting to summit.  I passed by a trailhead parking area crowded with cars, one girl smiling, scanning the landscape with her phone/camera, then running in excitement back to her car and her partner.  It was really nice to see more people around.

I caught up to another CDT thru hiker in the morning, as he stood talking about the hike with some curious day hikers.  He had a quiet, thoughtful manner.  We hiked together a bit, snacked, then continued up San Luis Peak.

It was cathartic to talk with him about the most frightening trail moments from Chama to Pagosa Springs.  He claimed that many hikers skipped up to Wyoming after that section.  He said he doesn’t like how cold it is at night, just as I had felt up in these high elevations.  He affirmed that it’s been a tough trail, and that his hike has been pretty solitary.  I told him about hearing coyotes yipping outside my tent one night (not sure how close), how I’d thought their distant howls kind of romantic before, but how scared I was that time, in spite of knowing they’re rarely aggressive towards humans.  He flatly said that coyotes always creep him out.

It was so comforting to talk about the experiences of this hike with someone else.  I’d felt alone in my struggles out here many times, anxious when things came up, and often not around other hikers in those moments to discuss the latest stressor.

The path up to San Luis Peak was over talus, slabs of rock that feet sank into, which was steadying.  It was both tough and invigorating and beautiful, as these climbs always are.  I stopped often to let my heart and breathing settle. 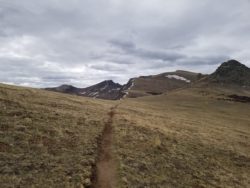 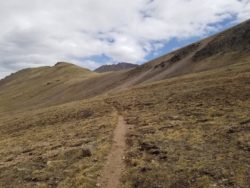 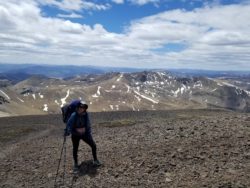 The final steps were a flat ridge walk, then a small summit area with a small semi-circle rock wall to take cover or rest against.  It was definitely a different feeling than Whitney’s large sprawling summit, my only other 14er climbed thus far.

The flat ridge walk at the end unnerved me.  I felt as if the wind could blow me over, though then I watched other hikers approach the summit following me, two women my size and smaller, seemingly unconcerned by the wind.  So much is perception and past experience out here.

I sat awhile on the summit, along with the other CDT hiker and a few day hikers.  Lots of ranges and valleys could be seen from up there,  but on that narrow peak, I felt pretty anxious to get back down again.  I guess I enjoyed the views on my way up to the summit, more than from that highest peak.

14ers are not for me, I think.  It’s a good thing to know, as the trail will continue to pass by many more, with opportunities to hike up them, if one so desired. 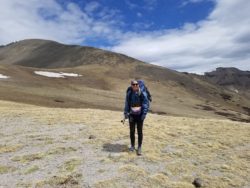 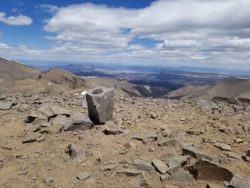 June 7.  Towards evening on this day, I started smelling campfire smoke as I descended a valley towards a camping area.  Soon I saw another CDT hiker tending a campfire within a fire ring.  He waved, and I walked over to camp there too.

It was such a nice evening.  I had hiked alone all day, and it was nice to end the day camping near someone else.  Another hiker caught up after me, and stopped to camp with us as well.

There are few to no shelters or specified gathering places along the CDT.  Chatting, laughing and eating dinner with these hikers reminded me of so many similar nights on the other two trails.  The solitary nature of this trail remains one of the primary challenges of hiking the CDT. 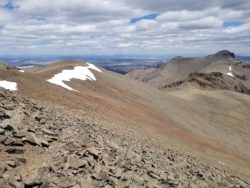 These past days, I’ve been thankful to relax at lower elevations on the Creede Cutoff, hike San Luis Peak and quickly descend again from it, and get to know two more CDT hikers.  Every week there are more, or at least strengthened, realizations about what I seek and appreciate from a journey like this, and from life overall.