Finally made it to Wyoming! I made it to the spot I flipped up to for the Basin. Now we’re heading up to South Pass City at the end of the Basin to start back up where we left off. It’s just 1,200 miles of unbroken trail from here. No more flipping or flopping. New trail means new ways of being. I’m not walking through anything anymore, now I’m just walking toward something. Which really excites me. Here’s finishing Colorado.

Got up and rushed to pack. A nice guy gave us a lift as far up to a trailhead as he could. I was preoccupied with some writing so I didn’t make much discussion. We parted and hiked the rest of the way to the trailhead and had some food, used the pit toilet. Then pushed on. Leapfrogged with everyone while route setting through a lot of snow. Climbing all day, I took a lot of breaks. Sweets and HD broke ahead late afternoon as I took another break. Got to the summit and sat for a spell; it was quite beautiful. I set up camp a little below the top, but didn’t sleep very well. 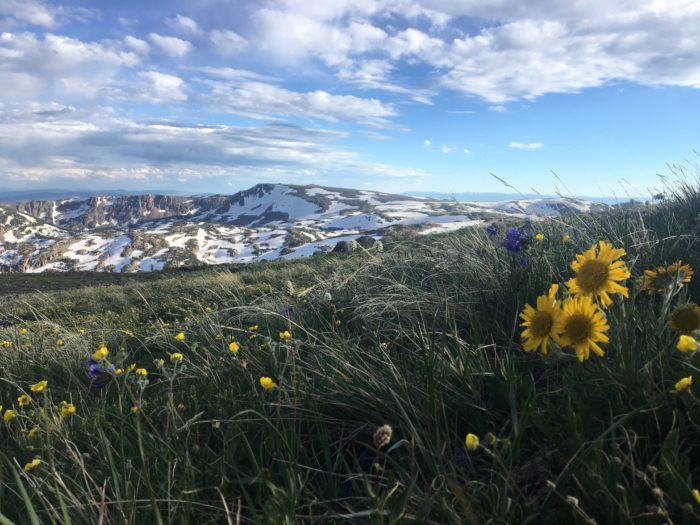 Woke up and took a long morning. My body was tired but I managed to get up and out. Went for a while without stopping. The snow had let up but there were a lot of blowdowns. I also felt sluggish and slow. Stopped at a trailhead to have a meal and coffee to try to reinvigorate myself.

Pushed on after lunch, up a nice climb. It was steep at first but got more gradual. I passed the official halfway point on Guthook. There was no marker but it was cool to know the miles are going down from here. With the expedition to the Great Divide Basin I did a month ago, I’m a good bit passed the halfway point in my own hike. Filled up water and camped a bit before the top of the climb. Lots of mosquitoes as I fittingly found some sleep.

Got up and out early. Pushed all morning to the border. Ate some food, took some photos. Link showed up, hung with him for a while. I haven’t seen anyone since the day before yesterday so it was nice.

Crossing into Wyoming was really powerful. I almost didn’t think it was possible to get out of Colorado. That’s where I got to last year on my hike and where I was for the past year. But here I was in Wyoming, finally done with Colorado. It was a tangible sense of progress, two states down, two and a bit to go.

Pushed on and took another break where Link caught me. Moved on to a spot along a rocky ridge where I set up camp. I hung out atop some rocks for the sunset, watching the world close its eyes. I wanted to wait for the full moon to rise but it got too cold so I went back and fell asleep. 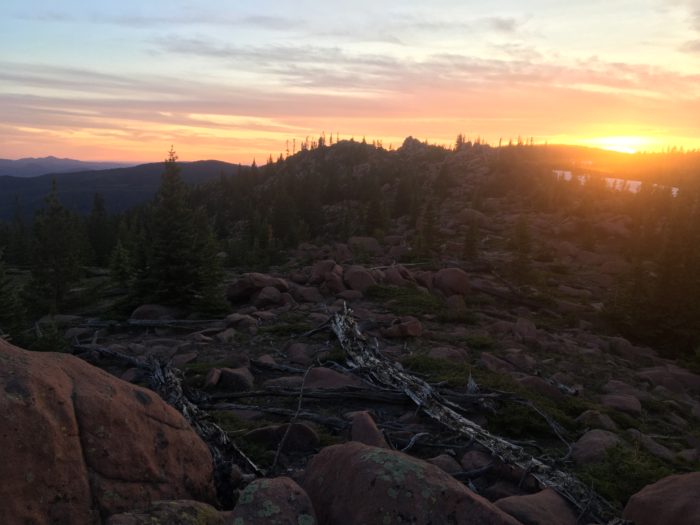 Woke up and got moving. The morning was a bit slower than the afternoon. Got to Battle Pass where I waffled about going into town from there. I decided to push on to the trailhead we had set up a ride. It was where we started for the expedition of the Great Divide Basin so it would feel better to hike back to exactly that trailhead before flipping up past the Basin.

It was a climb after Battle Pass but wasn’t that bad. There was some snow along the ridge but nothing on the descent. It was quite surreal actually. The last time we were here, a month and a half ago, there was two to three feet of snow everywhere. But now there was no snow and it was green everywhere. Our ride picked us up on time and got us down into Saratoga, where we connected with everyone. Got a room, made some calls, and hammered out a ride for tomorrow. Went out for pizza and got some ice cream on the way back. Crappy TV and then bed made for a wonderful evening.

Woke up and did some chores. Sent my snow gear home, which was a few pounds. Resupplied some and then packed up. Our ride came and we’re heading up to South Pass City to start back up. We’ll be heading into more substantial wilderness from there as we continue north. All the way to Canada.