Where the Deer and the Antelope Roam, Part Two

Back in Chama. Right where we left off a week ago. It seems so distant after this excursion up to Wyoming. After the Basin. Most things do. Plan is to continue north from Chama whether by postholing or alternates. Whatever path minimizes unreasonable avalanche risk. I visualize setting the tee with finishing the Basin. Being back to finish Colorado will be getting the ball. Jumping up to where I got to in Wyoming will be putting that ball on the tee and then; Winds, Yellowstone, Idaho, Bob Marshall, Glacier. Here’s setting the tee.

Woke up early and got some breakfast. Downloaded some things to listen to and left town. Trail was a bit hard to follow after it left the road out of town. Got to a fence where I saw a group I knew from New Mexico who had flipped up and went south on the Basin. People caught me at a spring. Plan was to make 16 more miles to the next water. A bit of road cut us down, though. I made it a mile past everyone as we all plopped down, exhausted. I passed out easily under the stars.

Woke up stuff and slept in a bit while Wraps passed me. Got up and out and pushed the remaining miles to the spring. Caught Wraps and everyone else caught us. Hung for a bit before pushing on. A straight 14 miles till the next water. Took a break somewhere in there, leapfrogging with people. Pushed the last four miles to a reservoir. Some Wyoming natives gave me three trout they had just caught. Cooked them over a fire we threw together with anything we could find. Dried sage bush, dried grass, part of an old fence post. Worked relatively well. Fell asleep content and bewildered by how surreal my life is at that moment. 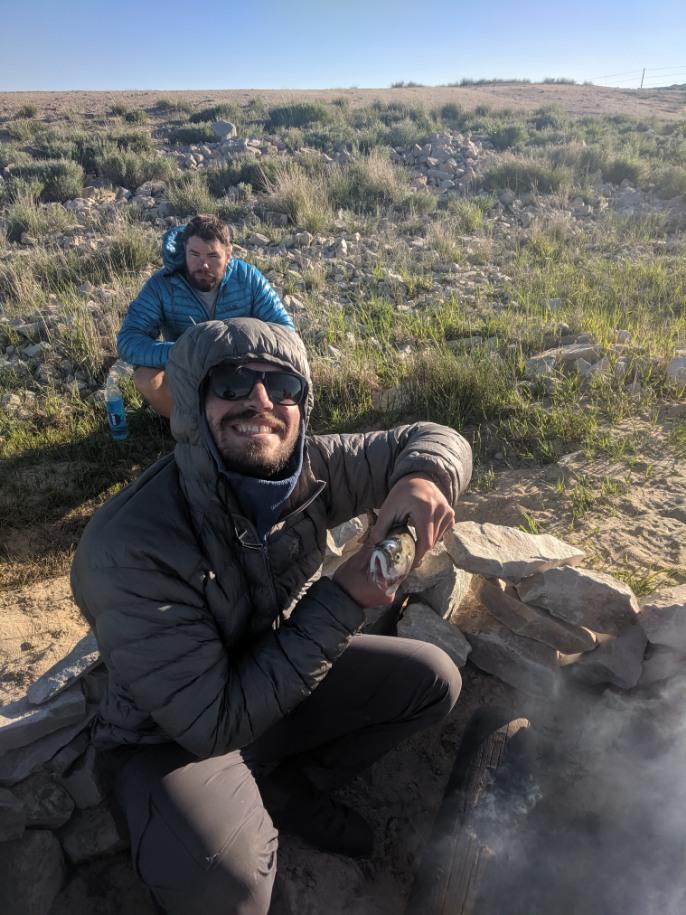 Trout in the Basin.

Woke up not particularly early. Wraps was ahead as Link and I stopped at water for a few minutes. Then it was nonstop hiking for a few hours to the next water, where everyone caught up. Had a large incline, gradual for the next ten miles. Stopped at a water source six miles up, which wasn’t that good so I pushed on. Took a small break at the top and pushed to a spring where I filled up for the evening. Pushed on to a high point where I could see a large portion of the Basin proper. There was also a herd of wild horses nearby. Caroline, Riley, and Link camped near me while Wraps pushed on. Was severely tired at the end of this day so I fell asleep very easily. I have the best nights of sleep on trail. 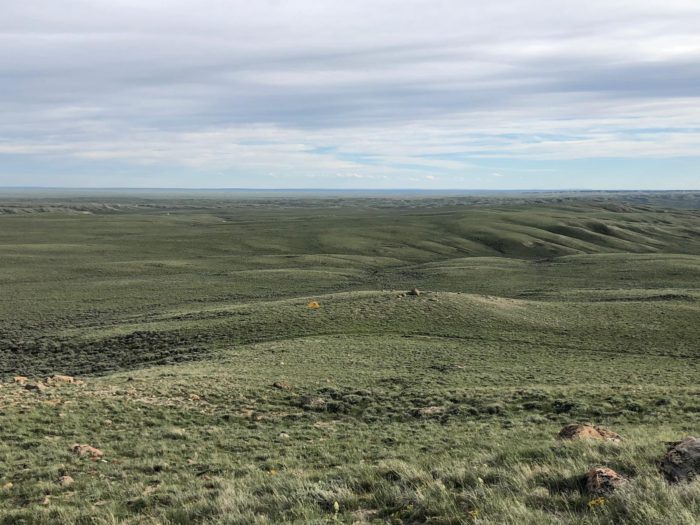 Got up and out early. Intention is to put miles under my feet. Pushed ten miles nonstop to a pond where I filled up and rinsed my body a bit. Leapfrogged with Wraps to a water cache a mile farther. He left and I chilled for a bit until Caroline and Riley caught me. We talked about plans going forward but didn’t decide anything as we still had a day or so of Basin hiking to do. So I left and got to it. Pushed 11 miles to the next spring.

I would normally take at least one break in an 11-mile stretch. But the hiking was quite easy on my muscles and there was nothing to stop for. No shade, no views, no water. But it’s also three and a half hours of hiking with no views, so I was left to my own devices to push me through.

I could see the trail ahead of me from a few hundred yards to miles. The trail was all old Jeep tracks so easy tread. I would intentionally try to keep the focus of my gaze on the horizon, on the landscape, or on the trail, as far ahead as I could see. Anything that would keep the focus of my vision from the ground beneath my feet. Which is where my focus needs to be sometimes, especially cross-country or tracing terrain. But flat, dirt road?

My body could turn on an autopilot of following the trail while my focus was on the point ahead of me, however far. The only thing that stood between me and that point was time. And space, but those are sort of the same thing here. The farther I had my focus set and the longer I could keep the focus trained, the smoother and quicker I processed time. All the way to wherever I had set the focus. I became a mile and time processor machine.

I would do that over and over again. Until I got to the spring, where I found Wraps. He decided to stay as I pushed on another mile and a half to a nice rise. My body fell asleep easily as my body was feeling the miles I had been doing.

South Pass City was around 17 miles from where I camped so intention was to push there before it closed. Wraps passed me in the morning but I passed him till a river crossing, where he caught up. It was an alternate that supposedly cut off five miles but only ended up cutting off around two. So instead of 17 miles it was more like 20. Played the game of focus to not take breaks but today I decided to unplug.

I had been wearing headphones all day, every day in the Basin until this point, as music, books, or podcasts just helped me not be bored. It also let me escape how vast the landscape was around me and how small I was in comparison. So no escape, no views, no breaks. Just rolling hills and miles.

I thought of some things. Conversations with people. Should’ves, could’ves, would’ves. But it all started to seem so distant. I began to internalize the vastness I had been experiencing. Those thoughts seemed impossibly distant. Everything did. My life outside of trail, my life before trail, even that start of this trail, Lordsburg, felt a lifetime away. Everything fell away until I was just a moment. Just a step forward. That was the entirety of my being.

This pushed me far but as I got closer to South Pass City, the trail seemed to drag on. Pushed through to the city and got my package. Everyone else arrived and we discussed plans over soda and ice cream sandwiches. Decided to go into Lander to get service and research different options. Picked up two other hikers, Snowcat and Hemlock. Got to Lander; hotel, pizza, you get the idea. Hung out and decided to rent a car back down to Chama and start back up where we left off up through Colorado. Went to bed clean and a little stressed about the size of our group.

Woke up without hurry. Went to breakfast and met everyone there. Caroline and Riley got a bus to a town over to get the car. They came back with a big, swanky Chevy Tahoe. It’s a seven-seater and we have eight people with packs so we played some Tetris with our packs and ourselves. At this point we had Wraps, Link, Caroline, Riley, Carmen, Snowcat, Hemlock, and me. My trail name is Open on this trail. 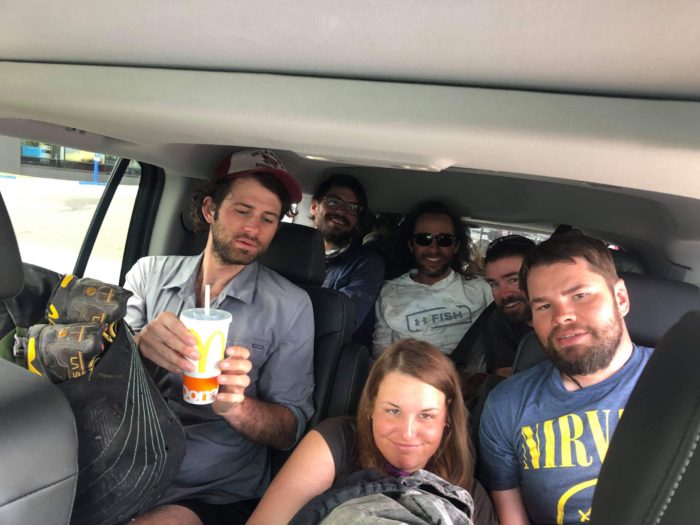 Riley, Open (me), Snowcat, Hemlock, Link, and Carmen in the middle.

Managed to stuff everything and everyone in and hit the road. Destination Steamboat Springs to hit Big Agnes store before it closed. I was super uncomfortable. Basically in a sited fetal position for four hours; felt like a form of torture. My patience was thin this day.

Made it to Big Agnes and swapped out my sleeping pad as it had been deflating quite rapidly without any obvious punctures. Everyone was tired so we decided rock stay in Steamboat and get a room rather than continue on. Got a suite with a kitchen. Hung out while Caroline made a magical spaghetti dinner. I cleaned up and we hung out a bit more. Watched the Toronto Raptors win the NBA finals, played Never Have I Ever. Went to bed relaxed and satisfied.

Woke up and went to the grocery. Got stuff to make pancakes and eggs. Made eggs relatively easily but pancakes were a bit more challenging. A nonstick pan makes for easy sticking and burning. Broke our fast, packed up, and loaded the car back up. I got a more comfortable seat this time, which was a godsend.

Drove down to Arvada, where my aunt and uncle live. I dropped off my snow gear with them on the way up so I picked up just the ice axe. My cousin, who I hiked the AT with two years ago, was there as well so I got to see him, which is always a boon. Headed on down to Colorado Springs where we met Peppermint for dinner. She had put us up when we were on our way up to Wyoming. Went to REI and lost Carmen. She was going to fly out of Denver back to Canada before southbounding from the northern border.

Got a drink at Starbucks as I took over driving. Pushed four more hours all the way to Chama; we got in around 11:30 p.m. We called ahead and the lady who runs the place met us and got us our rooms. I was still buzzed off the caffeine so I hung out and watched some soothing videos while tiredness slowly took over my body and sleep won me over.

Slept in a bit. Can’t really sleep in past 7 a.m. at this point. Link and Snowcat went south to drop off the car and to meet back on trail where they got off. Plan today is to zero here in Chama, get organized, ready, and head out in the morning. Chama is a lovely town but it’ll be nice to finally be done with it. Getting back to mountains, and Colorado Rocky Mountains at that.