Dry Burn Areas along the Divide

Heading into the Bob Marshall Wilderness to East Glacier. Permits are gotten, flight is booked, the end is in sight. Levels of surrealism arise as the picture of the past four and a half months comes into focus. Here’s more of the process.

Woke up in Helena and packed up. Wraps and I  met Frank, the guy who would give us a ride back to trail, for breakfast. Super nice guy. He’s a writer so we connected over that. He’s had a really interesting life, and the breakfast food was amazing. After breakfast we went back and picked everyone else up and got back up to trail. Met up with some other hikers, Akuna and Undecided. 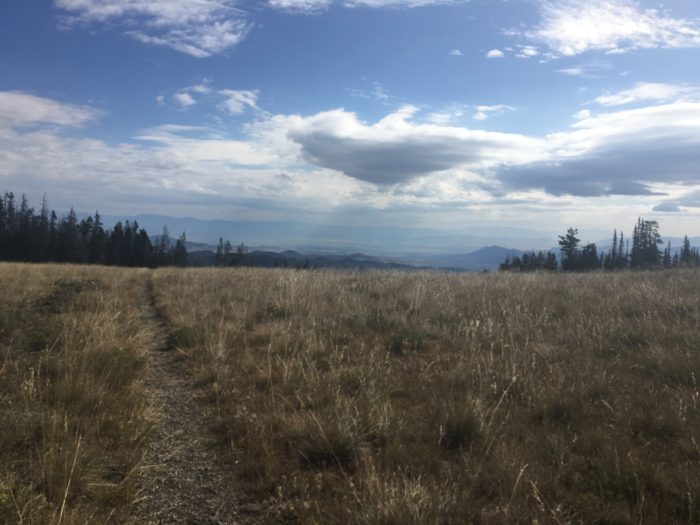 Walked up road to a weather station, then a very blowdown-filled descent. Got to a junction for an alternate that cut off a few miles. Listened to a message that brought up a lot, but it passed with extraordinary speed. I fully felt it and could let it go then. A manic, deep, free laugh escaped me. The others caught up and we hung out. I pushed on after a bit. Caught Sweets and talked about some past traumas, reflecting on the people we were. It felt really freeing. Got to a spring and cooked before a storm quickly came through. We threw up our tents and finished our meals inside while everyone else came in. Discussed plans, hung out, then found sleep. 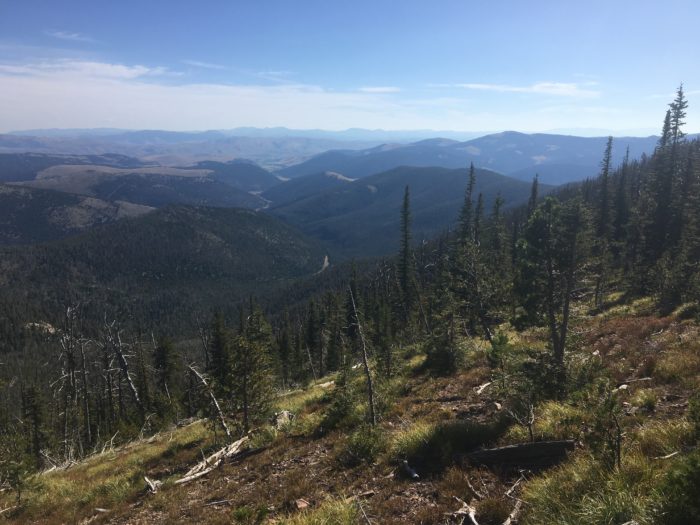 Woke up and waited for the sun to dry some things. It didn’t do too much so I just got out after a point. Gorgeous hiking this morning. A lot of ridge walking, a lot of views. Montana is a beautifully rugged state. Took a break around lunch and dried my tent. Pushed on and caught Sweets and SeaLegs. Chatted with them for a bit. Then split off and climbed up to a lookout tower. It was a cool view but the top was locked so couldn’t get the full thing. 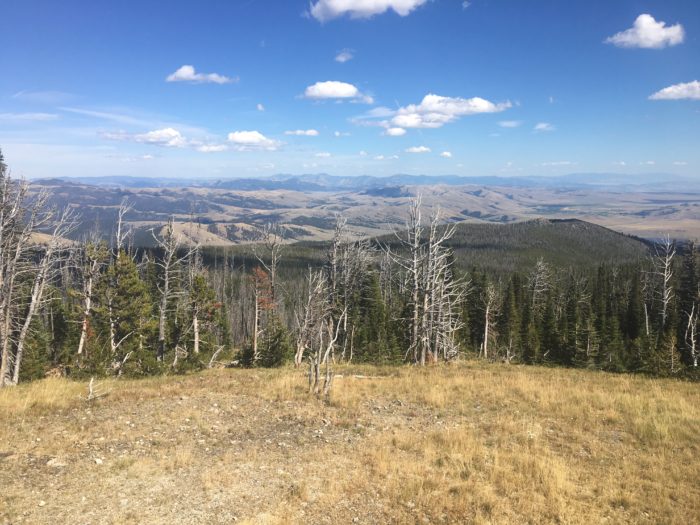 Dropped back down and hopped onto some road to avoid some climbing. I jogged a bit on the road as it was flat and a bit downhill mostly. Made it to an outfitter that was just popping up. A fire closure had just opened up so we needed an extra day of food so we re-upped our supplies and got some Powerade. This had been a dry section. Link showed up and we filled up water and pushed on. Did some roads and cross country to catch SeaLegs and Wraps. Dinner, hanging out, and then bed.

Woke up and had a bit of a morning with Link and Wraps. Got moving along some pretty tough terrain. Walked through an intense burn area that had closed the trail earlier. It was a bit spooky. I had some service so I booked a flight. It got me a bit depressed having a concrete date for the end of this experience. Then it was ridgewalks along the divide. It was pretty, but frequently steep climbing and descending. Varying levels of tree cover and a climbing temperature. 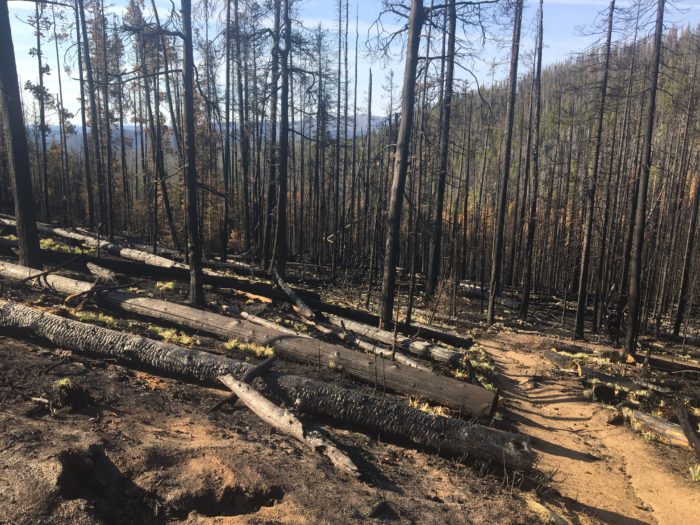 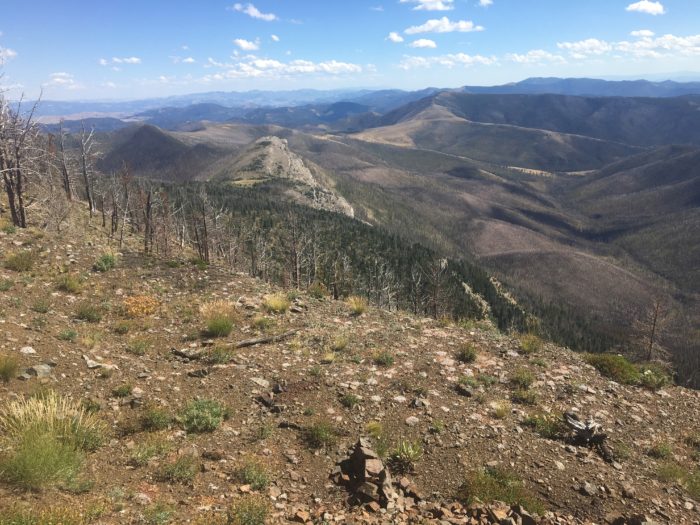 Got to a pass that had a water cache. It was low so I didn’t take as much as I needed as I knew there were people behind me and this is a really dry section. Got dehydrated pretty quickly and caught Sweets near the top of a climb. We took a break and Wraps showed up so we went ahead and reserved sites in Glacier National Park. It was a challenging process; we didn’t get the sites we were wanting and were pushed back a day for finishing. There are ways we may be able to change that but the permit was done. Having these firm dates made the end feel so much more real along with dehydration sapped my morale. And there was a final descent where I could see tomorrow’s climb, which was intimidating.

Filled up water, finally. Hydrating lifted my spirits as Sweets caught me. We descended down to a meadow/parking area where we were going to camp and came across some section hikers who had just finished up. They gave us a bunch of extra food and some beer. Link and SeaLegs showed up, after having gone into town, with some other goodies as well. It was truly magical as we rehydrated, refueled, and laughed until bed.

Woke up and pushed out. Crazy climbing. I plugged into an audiobook, The Way of the Peaceful Warrior. It has been on my to read list for a while and today was the day I did. It really resonated with me in a profound way, where I am in my own journey. Got to a spring and filled up, hung out for a bit. Then plugged back in and chugged on. I’m not sure what that book did but it felt profound. I need to sit with it more. 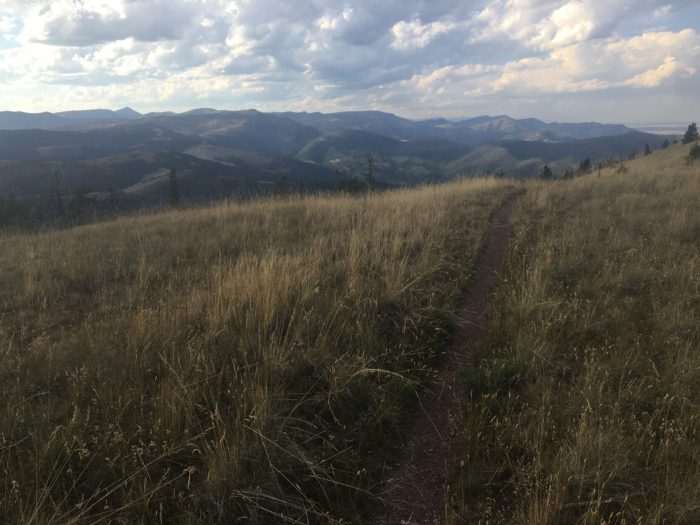 Challenging hiking, but not as hard as I had built it in my mind. Also a good reminder of how powerful I am. And the views were absolutely breathtaking. I’m loving these mountains in a way I haven’t any others. The similar sense of the divide is sort of present but there’s a completely different feeling on top of that. Hard to put to words. So rugged, so wild, so beautiful. Pushed on and leapfrogged with Wraps and Sweets, finishing the book. It was kinda short, but profoundly wise in ways I’m sure I’ll know for years to come. Made it to water and caught up on writing. Sweets and others caught up and we did food. We’ll move a bit farther for camp as this seems to be a probable bear location.

Really cold morning. A layer of frost covered all our tents. Packed up and got out to a climb first thing. Warmed the body up and also climbed up into the sun, shedding my layers. Fantastic ridgewalking for the morning. Still pretty dry and felt some exhaustion from that. I also haven’t been getting the best sleep. Pushed on and descended to a small river with crystal clear water. Took a break and dried out my stuff. Also rinsing my clothes and self and sunned everything to dry.

I had a letter I felt pressured to write. But it took me out of the hike for too long. I didn’t really have the space for it but I got the bulk of it out of my mind and onto some paper. I can let it sit for now and come back to it later. Packed up and pushed on as Link and Wraps caught me. I wanted to ground myself back on trail and bang out some miles so I outpaced them quickly. Caught Sweets and we pushed on. Found a lovely spot near a river and set up. Had some dinner and hot chocolate as the stars started poking out. Then we retreated from the cold to our tents and found sleep.

Woke up and got moving. About six miles to road so we pushed to get there early. Pushed along a nice stream, then up a pass, and down to a campsite along a road. It was a long hitch, almost no cars. Finally got someone coming in with the sweetest golden retriever. We had lunch with her at the local bar. A good burger and soda, exactly the correct thing for the moment. Everyone else shuffled in. We got rooms, showered, laundry, resupplied. Then we hung out on the porch of the motel and chilled for the rest of the afternoon into the evening. Akuna and Undecided showed up and hung out as well. It was a merry evening until we found sleep. Getting back out tomorrow for the penultimate section. Almost done.