Embracing the Brutality on the CDT

Shortly after leaving Leadville, the Colorado Trail turns toward Denver and parts ways with the CDT. The well-defined, maintained track of the CT immediately returned (degraded?) to the CDT we typically expect: neglected, exposed, steep, covered in blowdowns, sketchy, or just plain nonexistent. Despite increased efforts, our pace slowed to a crawl. We were feeling so good after cruising through the Colorado Trail, it was frustrating to return to the harder than expected terrain of Northern Colorado. 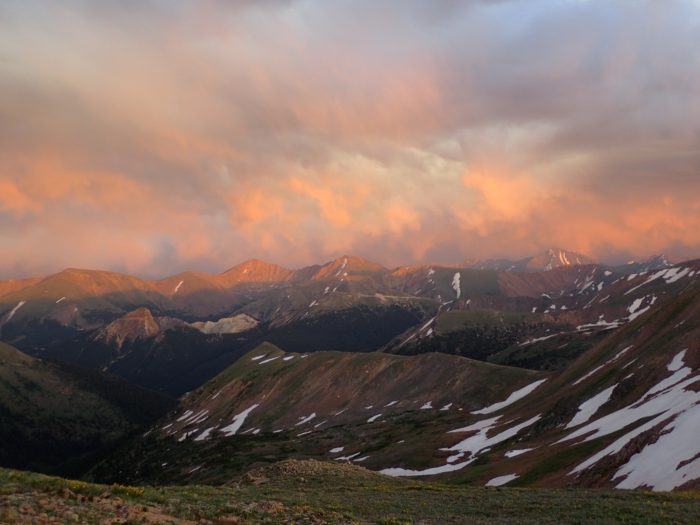 Having had our fill of scary and dangerous trail for a while, Piñata and I opted for the Silverthorne Route to avoid the miles-long knife edge “trail” over Gray’s Peak. The alternate was beautiful and offered easier resupply options, but in no way was this section easy. Oftentimes there was no trail, usually the terrain was steep, we had several big climbs over 12,000 feet, and once or twice the trail was so steep it was a little scary, even going uphill. Despite hiking 12-plus hours a day, our mileage was only in the low 20s, lower than usual or expected for us. Still, the weather was lovely, the flowers were blooming, and the views continued to be beautiful. 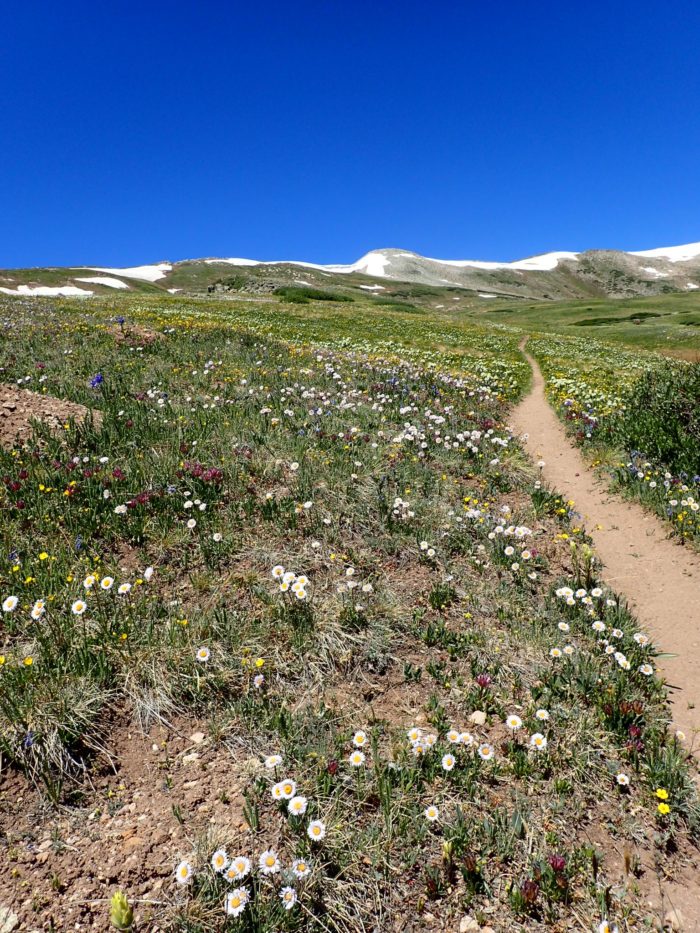 Once we returned to the official CDT, it was long ridge walks above treeline and two 13ers to tackle. The hike up and over Mount Flora (13,146) was actually easier than expected, probably because it’s relatively close to a road. We saw many day hikers out. Does everyone in Colorado have a dog? Because every single person or group we passed had at least one dog, no joke. As we descended from Mount Flora, we were blasted by a steady, hard wind that persisted the entire way down until we dropped under the trees again. Despite hiking across essentially a rockslide, there was some impressive trail building here, with the rocks and boulders placed strategically to provide a pretty flat walkway. I’m grateful to those who undertook such an impressive and backbreaking task. 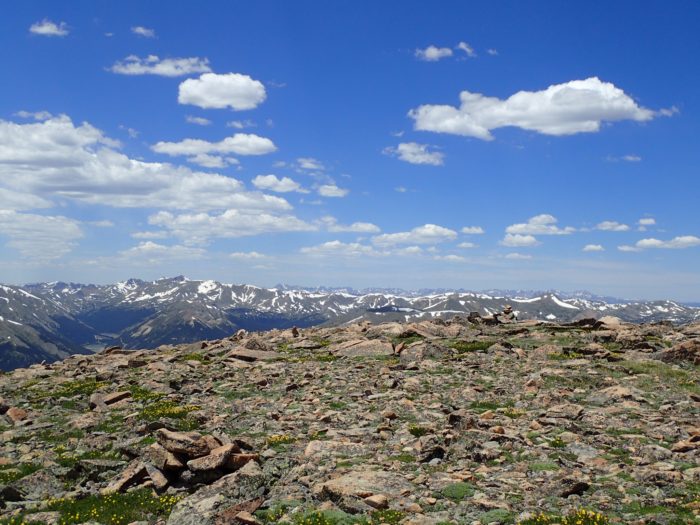 We dropped way, way down, only to start climbing again, this time up James Peak (13,301). About two miles below the summit we set up camp for the night to tackle the peak and the long ridge walk after it in the morning. Unfortunately, the high winds persisted, and we were blasted the entire way up and over the peak. The trail remained high above the trees and stayed on top of the ridge for another ten-plus miles. The wind was relentless, and we eventually dropped down a side trail to a road that paralleled the trail below the trees. It was a relief! In New Mexico, we dreaded the road walks due to lack of shade and water and the constant pounding on the feet. In Colorado, the road walks have become a relief, because it means it will be well graded with no blowdowns, and easy to follow. We’ve come full circle on the CDT. 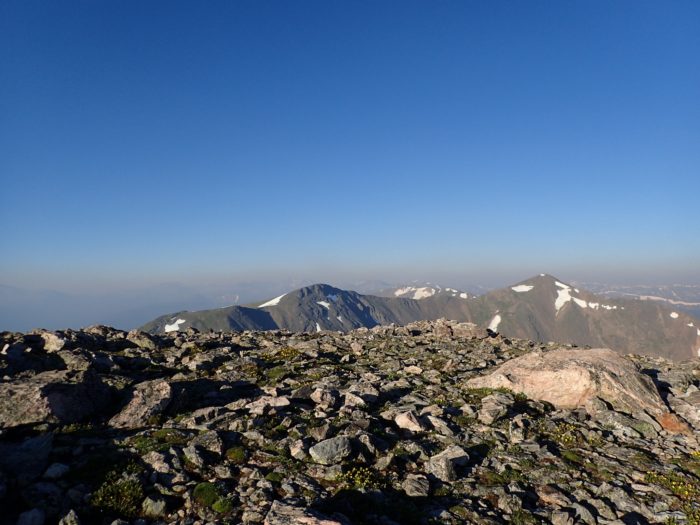 James was the last peak over 13,000 feet, and even though we still had plenty of time to spend on high ridges, it felt good to know we were starting to descend at least a little bit. The end of Colorado felt so close and yet so far at the same time, and we were longing for some cruising terrain where we could make some miles. The unofficial motto of the CDT is “embrace the brutality,” and it sure felt fitting. Colorado is tough, both physically and mentally. 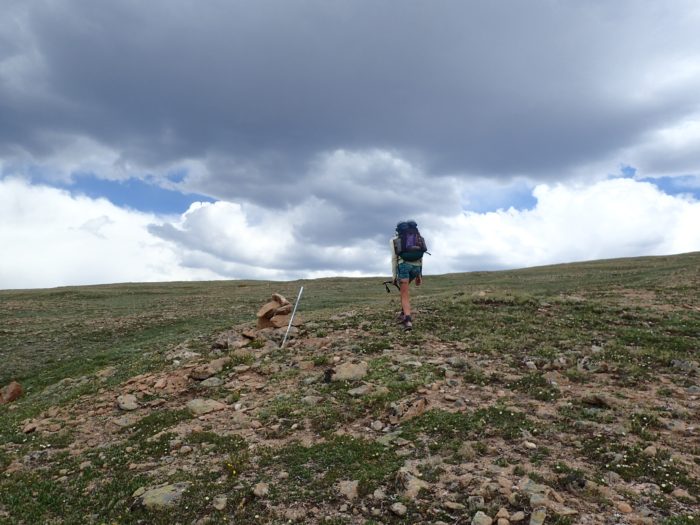 As always, trail magic appears just when you need it the most. Our friend Chef Ducky from the Appalachian Trail got in touch with me to say she was living in Denver and would love to meet us along the trail. We made plans to meet up in Grand Lake. She beat us there and hiked out on the trail to meet us. Once in town, she shuttled us around to all our errands: laundry, shopping, food. To top it off, she brought a carload of goodies along. She gave us a few trail meals she prepared, snacks, fresh fruit, juice, and even toilet paper. Plus, she brought enough along to hook up other hikers in town as well. It was just the morale boost we needed. 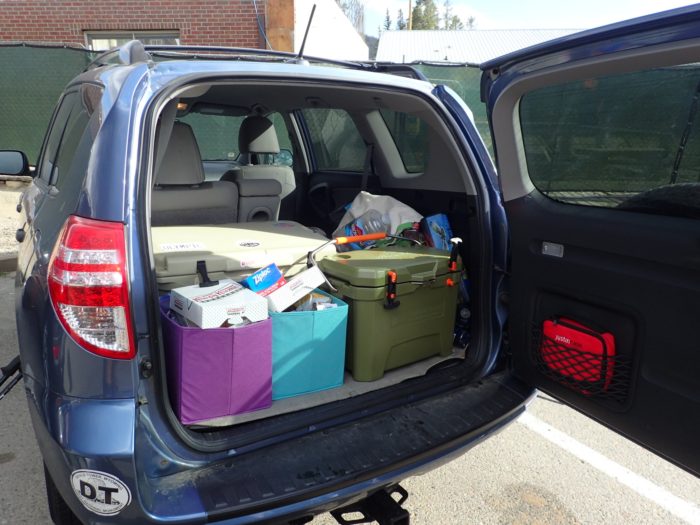 RMNP and the Never Summer Wilderness

Leaving Grand Lake we immediately entered Rocky Mountain National Park. As always in the national parks, the trail was wide, well graded, and well maintained. We saw plenty of people and plenty of wildlife, especially moose and elk. We hiked the section through the park in one day to avoid the need for permits or bear cans.  Leaving the park we entered the Never Summer Wilderness, where it actually looked a lot like summer, despite a few patches of snow. Later we climbed over Parkview Mountain (12,300) and said goodbye to our last peak over 12,000 feet. We had an awesome 360 degree view from the top, then followed a route marked by cairns to make our way back down to the trees and some actual trail. From here it was relatively pretty easy cruising into Steamboat Springs. 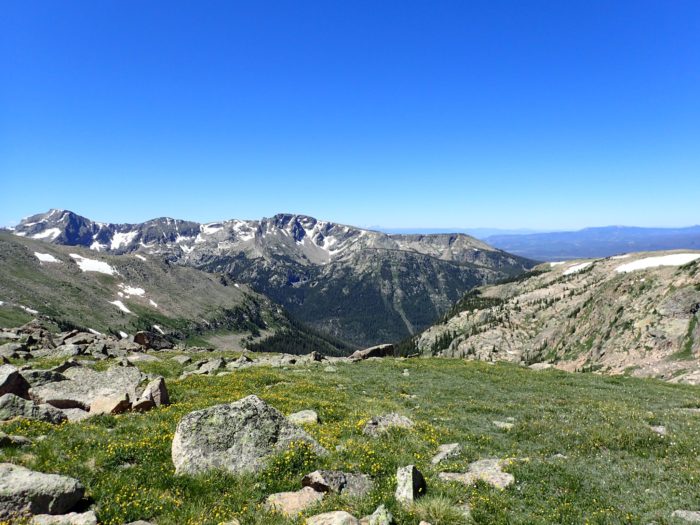 We made it to Steamboat on the 4th of July, with plans to resupply, do laundry, and get back to trail. At the grocery store we were approached by a local woman named Darcy who offered to take us back to her place and get cleaned up. In the end, six hikers found themselves at her home. We showered, did laundry, and charged our electronics. Darcy bought us burgers, salmon, corn, salad, strawberries, ice cream, and beer. We had a regular 4th of July feast, and after dinner she kindly shuttled Piñata and me back to the trail. What an awesome day. 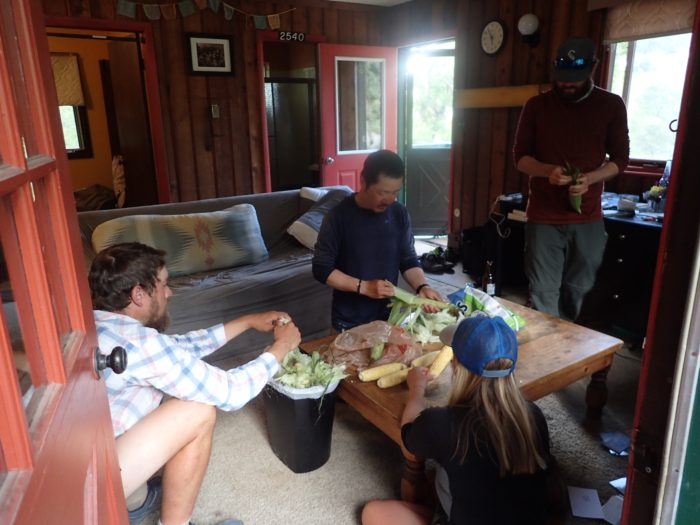 After Steamboat Springs, it was just two days to make it to the border. We walked through the Mount Zirkel Wilderness and enjoyed the beautiful scenery around us. We walked 28 miles our first day out of town, and realized on the second day that we were just 35 miles from the border. We decided to push a big day to make it to Wyoming, and we hit the border just around sunset. In a fitting end to Colorado, two huge fallen trees were blocking the trail just in front of the border sign. This is just about the halfway point, and does it ever feel good to get to a new state. The terrain ahead will present a new and different set of challenges, but we are ready for whatever brutality the CDT will throw at us next. 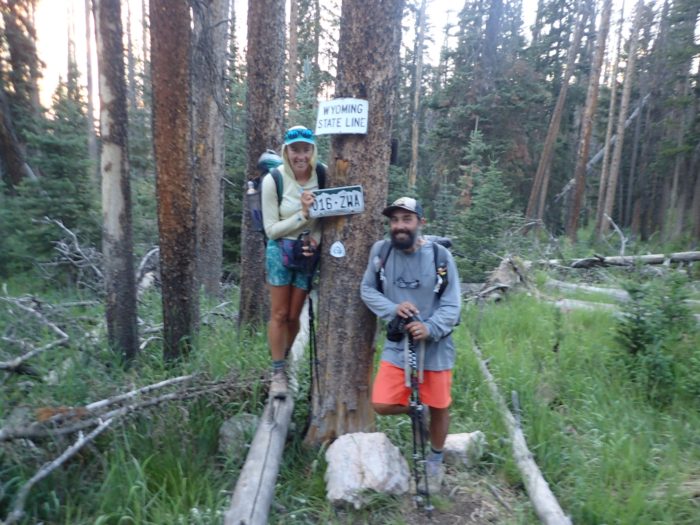