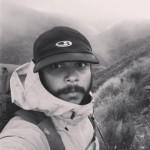 Frigid and Loafing in Sierra Vista

We were somewhere near the Mexican border when the snow started to settle on our tents.

This is a pretty good imperial stout, he thinks, setting down the paper cup next to last night’s leftover chicken and ribs, congealing in a pool of white gravy and sticky sweet barbecue sauce.

The last piece of deep fried catfish seems incongruous among the bones.

But so was the blanket of white stuff in the high desert.  It was quite something, though, to witness that majesty.  A wintry silence permeated the red hills, its barren manzanitas and prickly yucca plants, and a creeping chill descended upon the mountain side. 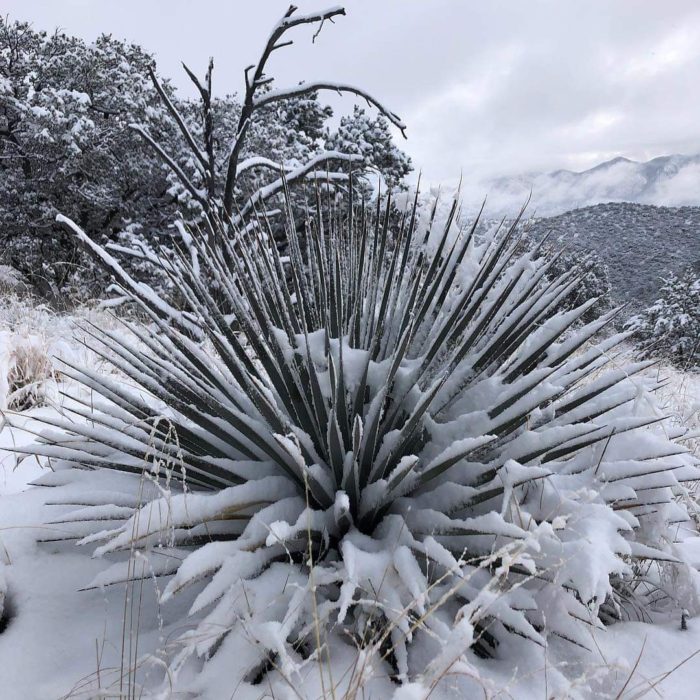 He quickly finished his second cup of hot chocolate made hastily on a flame whimpering in high altitude and single-digit temperatures. He needs to pack up and get moving.

It was as simple as that.

That was four days ago–at mile 29 on the second day of his thru-hike on the Arizona Trail.

“In my seven years living here, I haven’t seen a storm like this in Southern Arizona,” the cashier at the local discount food store tells him.

He pays for his pack of jerky and jalapeno flavored tuna packets. The extra bit of fun size chocolate bars would be nice to have when he would inevitably have to posthole through the snow, he figures.

A matronly cashier across the aisle calls out to him to be safe out there in the sky islands. She figures it was in the ’90s or maybe even the ’80s when she has seen this much snow in Sierra Vista.

He informs her that he is from Canada and this type of snow is nothing new, but that sort of confidence is just a show.

He knows it, too.

His partner is gently snoring in the cheap motel bed next to him.

There is a loaded backpack on the table. It belongs to his friend. His own pack is lying on the worn-out carpet as if it’s apologetic and slightly embarrassed:  half open, its innards on display.

The contents and heft of both pack belie a now tempered excitement for the trail.  His buddy only has ten days of vacation time. He was to be the official photographer for the first few passages on the trail; keep him company on the lonesome desert in border towns.

Now he is just asleep in a  cheap American motel. There is a half eaten muffin by his night table.

He takes another sip of the lukewarm stout.

It tastes like good vanilla with a hint of rum. The barkeep at Tombstone Brewing Company told him it was aged in rum barrels. That’s why he got it in the first place. If he wasn’t going to hike then he was going to find another way to take in southern Arizona.

Drink the beer; eat the food; learn up on local history. 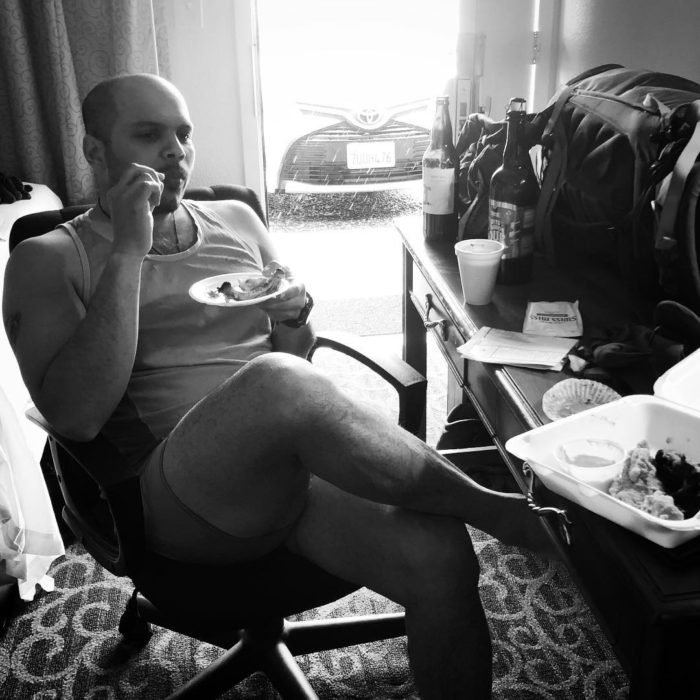 They have been holding out at this motel for two days now, waiting out the storm.

Snowstorms above 7,000 feet are no joke. He sincerely hopes that if any other hikers were on the mountains, they found an exit. He knew that local trail volunteers were organizing rescues.

This was supposed to be a shakedown hike for the CDT. And the first 50 miles did not disappoint.

First night at 7,500 feet or so his water froze on its journey from the bottle to the pot.

He has only experienced that wonder once before, that kind of instant freeze.

When playing Mortal Kombat II as the character Sub-Zero.

So must have been the temperature, subzero. His quilt was rated to 32 F. Luckily for him, it was a custom job and the quilt maker rated it conservatively. It was more like a 25F. He also had his new down jacket, his trusty Merino wool onesie, and a brand new uberlite sleeping bad he won from the Badger Sponsorship. He was cozy.

He didn’t even realize that the winds were gusting at 40 mph all through the night.

On the second night, he woke up in a cold sweat. He pushed his partner to hike nearly 20 miles. His partner is stronger than him but not a thru-hiker. Not yet, anyway.  Trail legs are at least another few days away for both of them.

He wanted to sleep on a flatter surface. So he pushed to make the miles to a dirt road crossing.  He is sure that his friend wasn’t thrilled at the prospect at first.

The gentle pitter-patter of snow on his brand new tent, also Badger sponsored, was soothing. He also knew that he didn’t set up the fly as correctly as he should have. It was beginning to sag under the relentless fluff.

It is morning. Already there were six inches near the base of his tent.  The sun seemed to put out a halfhearted effort, reduced to a diffused soft glow behind pregnant clouds. The Tiger Wall must have looked like an igloo from the outside. It felt like it too because snow is wonderfully insulating. Ask anyone who ever spent a night in a snow cave…

He slept naked that night; woke up to a winter desert scene as he had never seen before.

There is magic in the wild. And if you aren’t careful or humble enough to know when to bail, it will take your breath away. 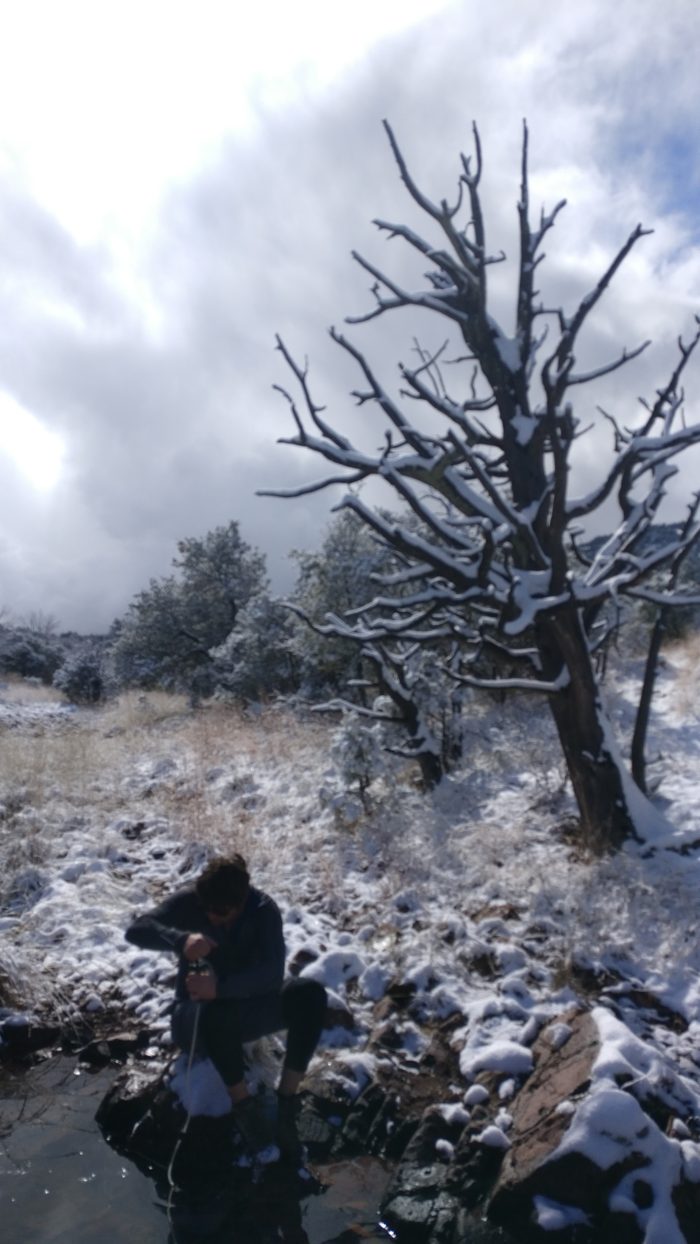 my name amiththan—yes, with a double th. i write, collect stories, and sometimes go for very long walks. on these walks tend to read and eat. a lot. i also test gear, ideas and, of course, myself