Getting My Feet Wet Outside Cuba, NM

The farther north I hike in New Mexico, the more I have to think about the snow.

Inevitably I will run out of snow-free trail. And then I will run out of New Mexico, the snow-locked San Juans before me, with choices to be made. From Cuba, however, Josh and I only need to be immediately concerned about a ten-mile stretch up in the San Pedro Mountains.

With the long and short games in mind, we decided to zero in Cuba, and leave midday the next day, camping before we hit the snow line. We spent two nights at Vince’s Rebel’s Roost, a spot just outside  town. We ate as much as we could, watched a couple of movies, talked to our families, and were as lazy as possible. This was our second zero on trail and we wanted to take advantage of it.

In the evening Josh and I found out that our friends Wing It and Stoke had come into town. We met up with them for a very late breakfast at Presciliano’s the next morning. (Their sopapillas are incredibly delicious, by the way: fried pillows of fluffy dough with honey, so good!)

Then we hiked out of town, very slowly, because we were so full. 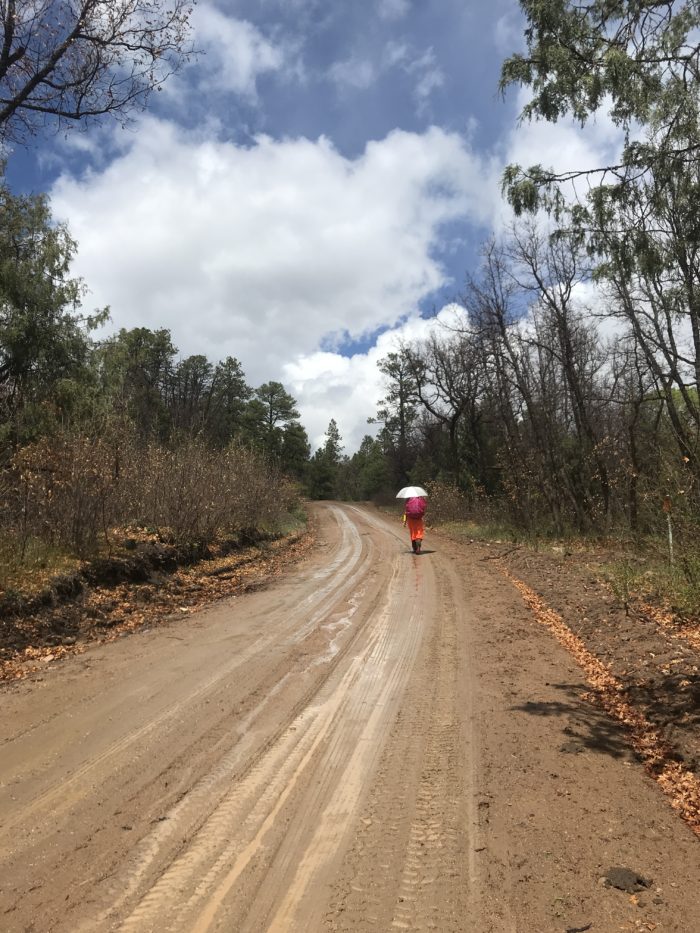 It was a paved road walk that turned into dirt. We ran into Wing It and Stoke again, driving up with a friend to check out snow conditions. Later on we found them pulled over, the friend’s two dogs running around chasing a Frisbee. It was raining on and off and we stood around drinking a beer. I was glad I had my umbrella. One of the dogs was a skinny shepherd collie mix with bicolored eyes, who ran beautifully but didn’t like to bring the Frisbee quite all the way to anyone, preferring to drop it six feet away.

The dirt on the road got muddier and eventually we got to the trailhead. Finally I had digested enough to eat a snack! Josh and I lazily proceeded along the trail, which followed a stream up a canyon. I knew we only had three miles to the top, likely completely snow-covered, so I watched the small spots of snow become more dense until we called it and set up camp in a flattish area. We both had ramen for dinner, a coincidence mostly due to the limited food options at the grocery store in Cuba. We share most of our gear, including a stove, but we do our food separately, which is definitely for the best.

Josh and I started hiking at 5:30 the next morning, and it was just light enough not to need headlamps. Up the stream we went, crossing a few more times, before seeing a movement in the trees.

It was, indeed, a human, packing up their backpack after having camped right on the trail. This was Jim.

At around 7 Josh and I got up to the top of the climb and entered a large snowfield, laced by a stream, the Rio Puercos. We left the trees and walked into the sunlight, ice sparkling everywhere, long shadows cast by the low morning sun. The enchanting scene was soon soured, however, when we started punching through the crust every few steps. It started innocently enough, just a few inches, but we were put off by the fact that we were postholing at all so early in the morning. Soon we were sinking to midcalf. 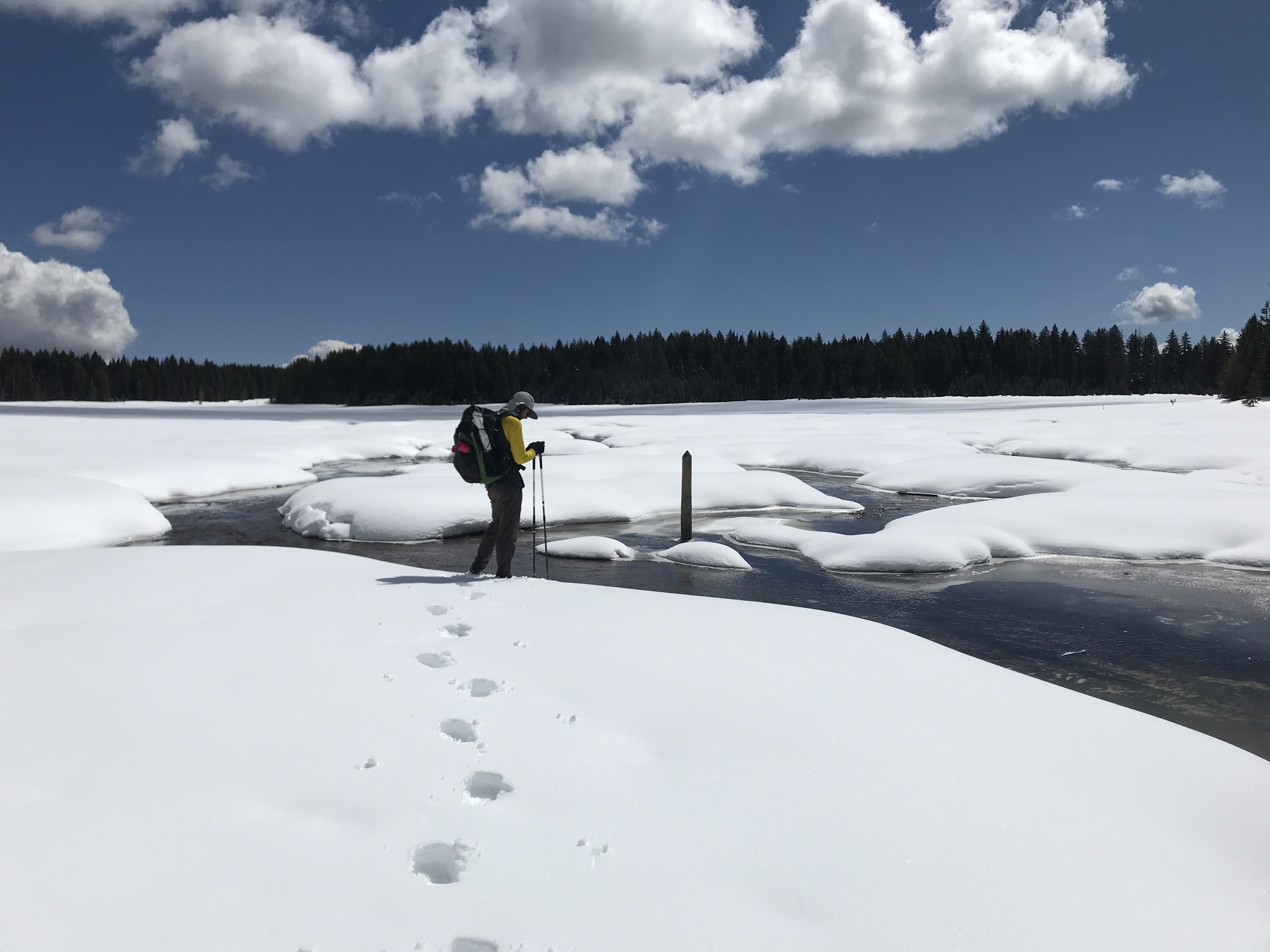 After some debate we stopped for a break to use some of our limited InReach messages to contact home and ask for our snowshoes to be rush-shipped to Ghost Ranch. We knew there would be more snow in the next section. Guessing that all trail miles above 9,500 would be snow-covered, I did the math and estimated that we could be looking at 60 miles of snow-travel between Ghost Ranch and Chama.

Sixty miles of postholing? No, thank you.

The rest of the snow section that we were on went incredibly slowly. We averaged 50-minute miles, leapfrogging with Jim, trying to take turns stepping in each other’s footsteps. Josh had the misfortune of being larger than Jim or me, so he would posthole farther even when he stepped in our prints. Because of this he chose to walk in front most of the time. When the sun was out at midday we decided to dry out all our gear, because what if the sun didn’t come back again? It was snowing a bit, large hard grains, but I shook them off the quilt as it dried. We used our umbrellas and trekking poles to prop everything up off of the snow. 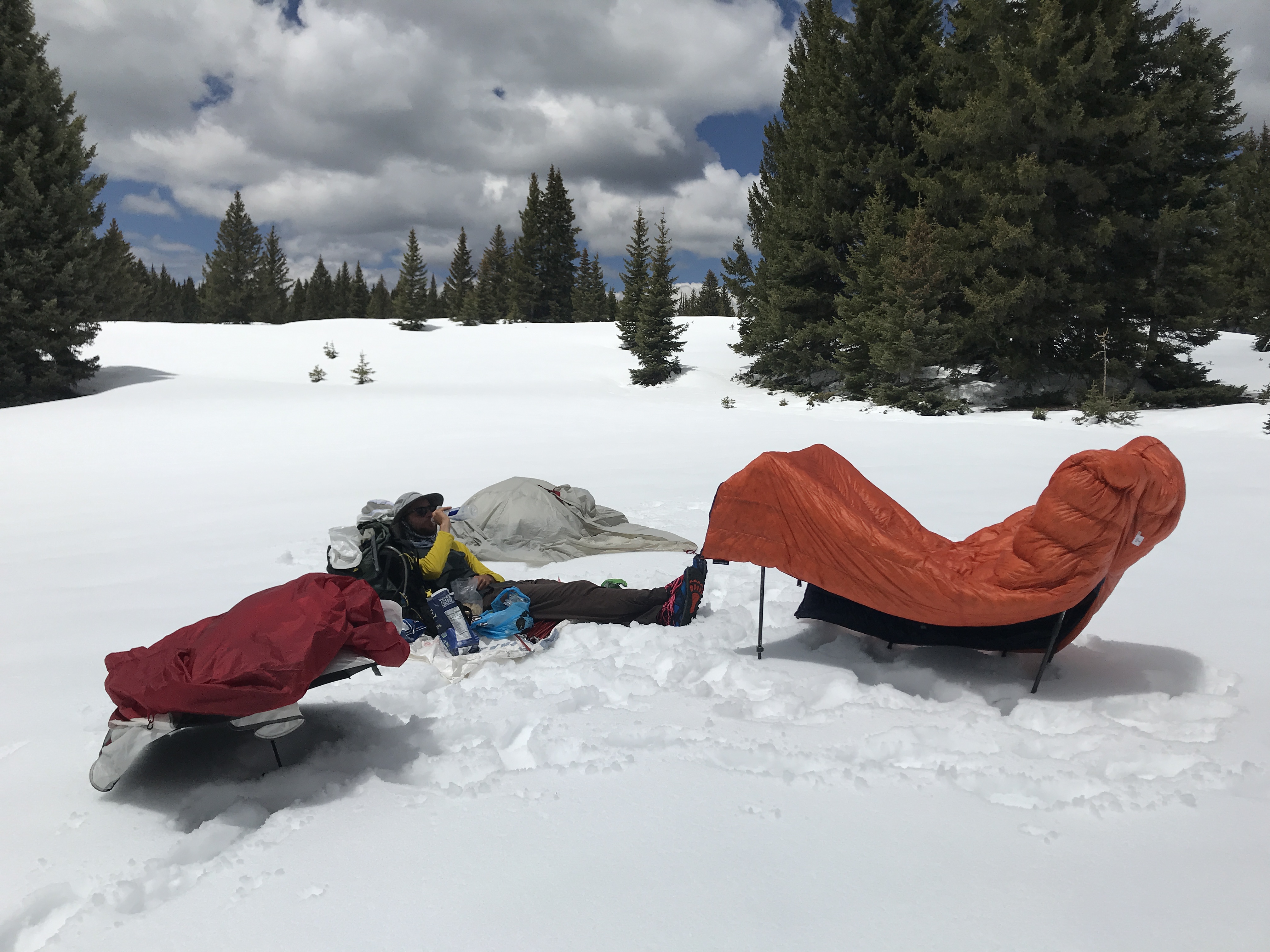 Once we started descending it didn’t get any easier. We ended up a few hundred feet off trail in thick aspen and pine forest. We kept trying to go down and left, diagonally toward where we wanted to be, but somehow were never any closer whenever we checked. Finally I started going just left, but then we were in a section with so much deadfall all over the ground that it was no longer possible to walk in a straight line. We both kept postholing up to our thighs, feet jammed next to or between hidden trees and branches in the snow. As the snow patches thinned out the deadfall increased, and we climbed over and under as best we could.

Finally I saw a cut log and found a stretch of trail!

Uncut logs and snowdrifts still blocked our way, but we were able to pick up the pace. At around 9,500 feet there was very little snow left. Being able to cruise along and just walk felt so good. At about 8,900 feet we came to a gate and a beautiful sunny green meadow. Spring, where miles ago it had been winter! We took off our shoes and waited for Jim, to make sure he got through the descent alright. Soon enough he walked into the meadow, sat down nearby, and took out all of his gear to dry it before the sun set.

It had taken us 12 hours to hike about as many miles. I felt frustrated and tired but was mostly just relieved to be done with snow, for now.

Because we had been so slow we decided to take an extra half day to get to Ghost Ranch, rather than hike on into the dark that night.

We set up camp at mile 666, where I was really tempted to make a pine cone pentacle. In the morning we climbed up onto a mesa and got some views of distant snowy peaks in the Sangres de Cristo. I listened to Kanye West’s My Beautiful Dark Twisted Fantasy all the way through for the first time in a few years, and was really feeling it on the uphill. 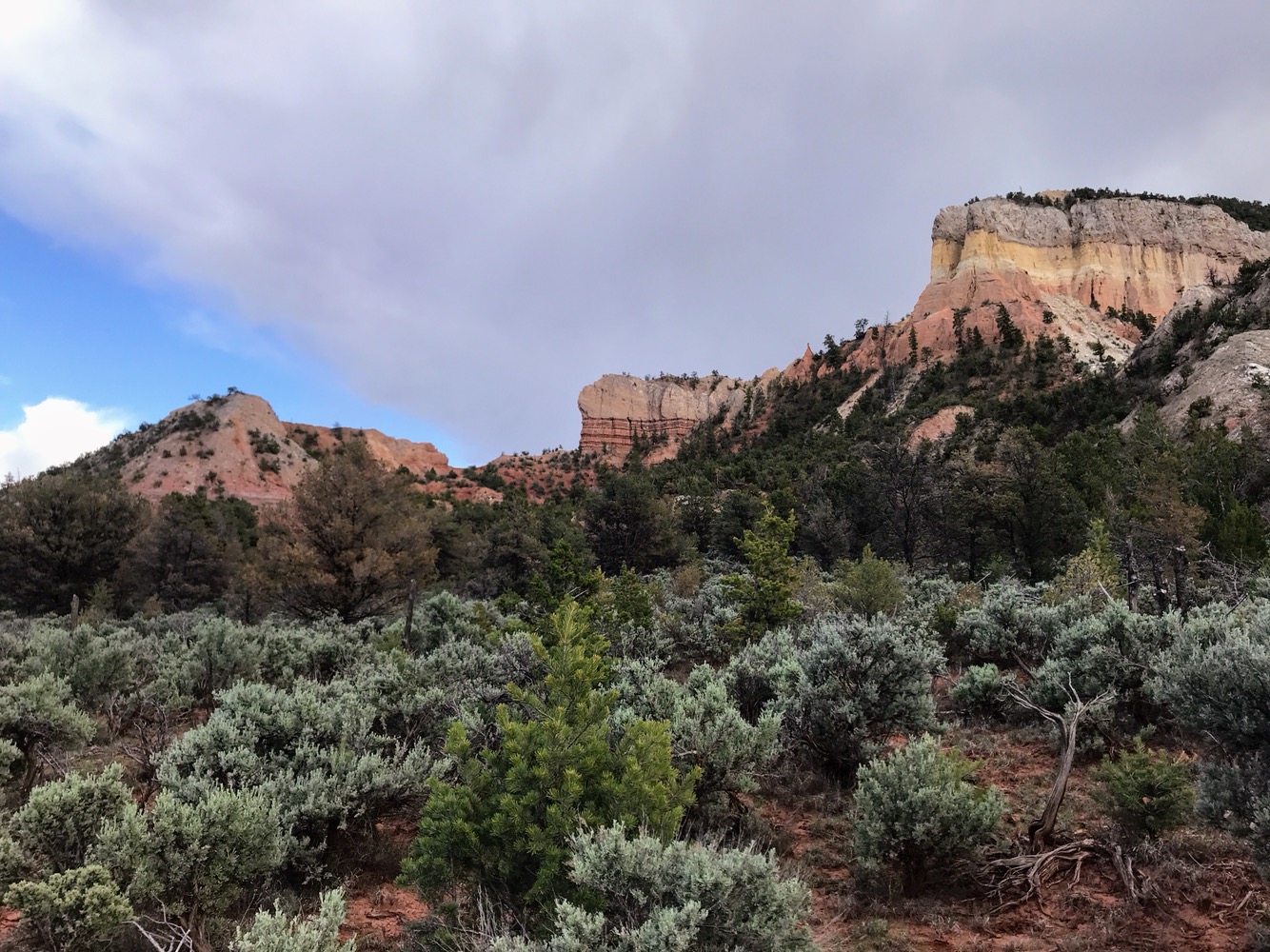 Down the other side of the mesa, getting closer to Ghost Ranch, I began noticing colors and thinking about Georgia O’Keeffe’s paintings. I could see how her palette was drawn from the landscape: pale pink of the sky and the mesa, dusky light oranges and reds of the dirt, blue above, creamy bones, and twisted gray brown sagebrush.

As I walked some raindrops fell. I watched the ground searching for the brightest paintbrush on the reddest dirt.

At a trough surrounded by puddles, mud, and cow shit, Josh and I balanced on some sticks to get water from a pipe. When we were leaving a baby cow almost came over to say hi. It decided we probably weren’t safe and ran away. Josh commented that it was probably easy pickings, and I imagined a big bad coyote dressed as a cow grandma, luring calves to her den. 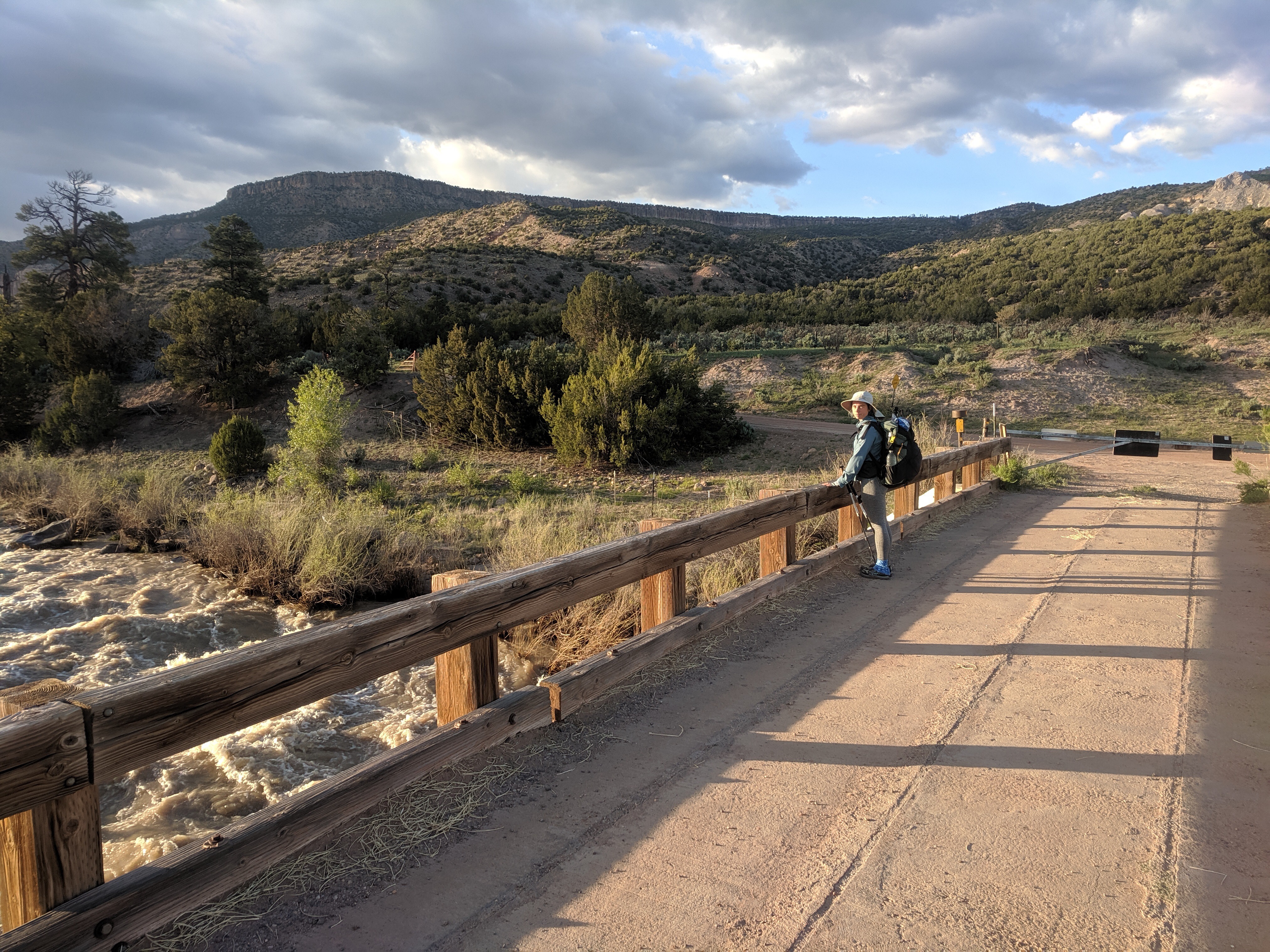 We crossed the Chama River on a big sturdy bridge and started road walking as the sun went down behind us. The light was so gentle, the foliage around the river so lush, the sunset so colorful. Josh and I found a spot at an actual national forest dispersed camping area, with a bathroom!

In the morning we had ten more miles to do into Ghost Ranch. After walking along the dirt road for a while both Guthook and Ley’s maps indicated that we should head due east to cut off some road. I thought it was going to be an interpretive trail because that was how it was labeled, but there were no informative signs and there was no trail, either.

So Josh and I went on cross-country, looking for a dirt road that we saw on the map. We were about ten feet apart, side by side, when suddenly Josh leapt back. He had almost stepped on a three-foot-long snake! It was stretched out, not coiled, so I stepped a little closer to check it out. There was no rattle, and it’s head was narrow, not broad like a rattlesnake.

The snake was flicking its tongue in and out, and it vibrated its tail in the grass, making a sound just like a rattle.

We took a picture and debated what kind of snake it was, meanwhile watching our feet and the ground, acutely aware that we were in rattlesnake habitat.

We found out later that it was definitely a bull snake (also called a gopher snake). Many of them have adopted the behavior of shaking their tails in the vegetation to make a warning sound.

We crossed a paved road and passed through an abandoned visitors center, which we had fun exploring. Out in back we found the interpretive trail, at last. It was overgrown and I couldn’t tell which plants some of the signs were talking about, but the locked gates that we had to climb over only added to the experience. 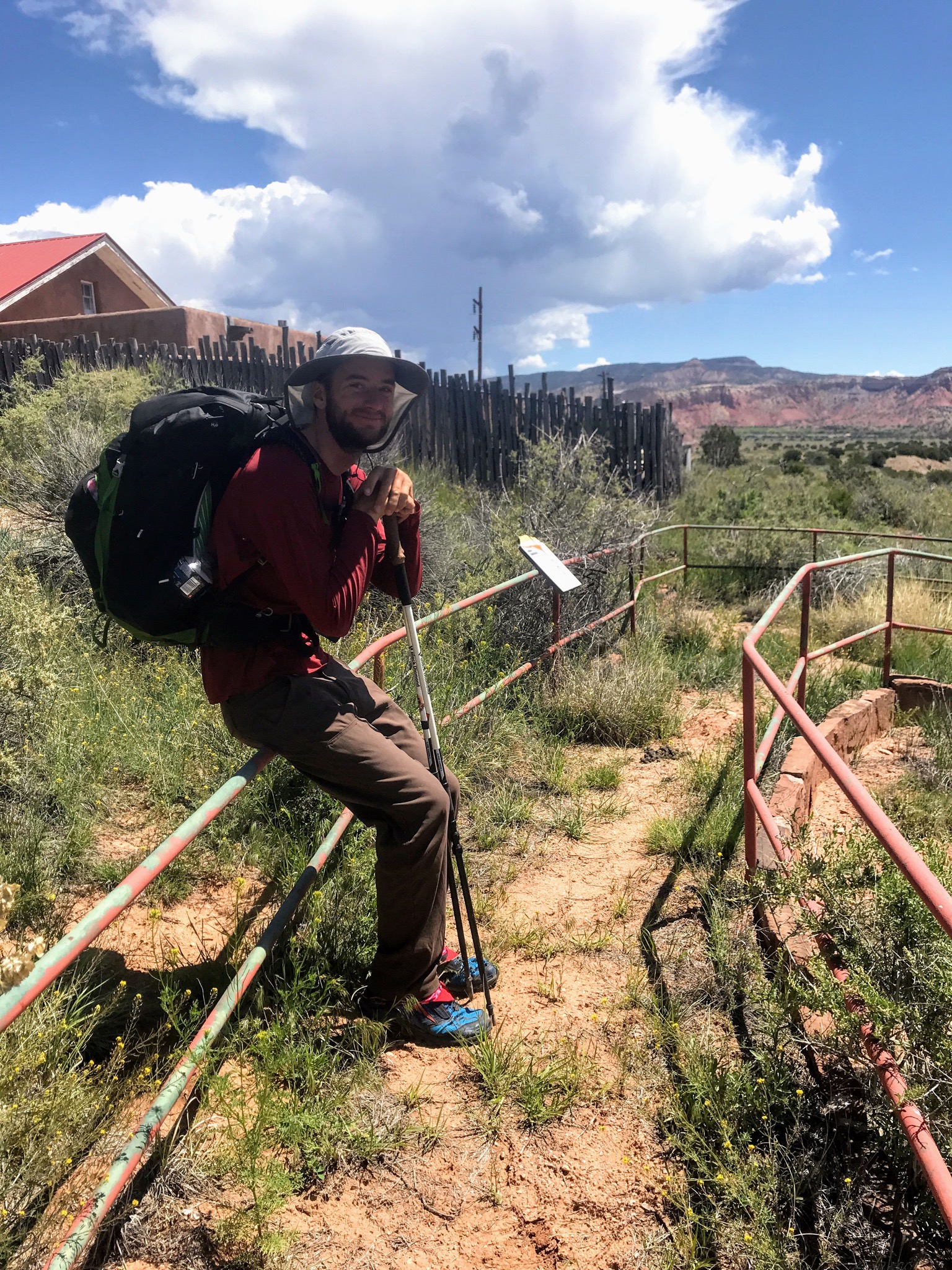 From there it was only a couple of miles into Ghost Ranch, and we made it in time for lunch at the cafeteria. Aside from the overly long walk back and forth to the campground, Josh and I had a very restful zero there. We even saw two more bull snakes, for three in three days. One slithered over Josh’s foot when we were sitting inside the welcome center.