I’ve made it to the Idaho/Montana border. Less than 1,000 miles to go, which doesn’t seem seem like much. Even though it’s still around a month of hiking. Went through Yellowstone National Park, finished Wyoming, and started the border of Idaho and Montana. Also connected with my good friend, Gabe, from a few lifetimes ago. Here’s the process.

Woke up in Dubois and got coffee. I talked to my cousin who I hiked the AT with and checked in. Met Link, Sweets, and HD at the cafe for breakfast, which was really good. Then it was off to the post office and grocery store for some chores. I called another good friend and chatted for a while. I missed life outside the trail but I know that I’m where I’m supposed to be.

Went back to the church and packed up until Wraps arrived. Then we went to a motel and hung out with some other hikers. Pizza for dinner, and watched some of Batman Begins before becoming too tired to continue and going to bed.

Woke up and finished Begins. We decided to take a zero as the TV had Netflix and we all wanted a day to just do nothing but lie in bed and watch TV. So we did. We watched the entire Dark Knight trilogy with some breaks. It felt really good to do nothing. No chores, and a break from the ever-present push for more miles. It was really relaxing. Watched some older movies in the evening before bed.

Woke up and packed up. Called a guy who gives rides and got back to trail with little drama. Wraps has stayed and Link had left yesterday so it was Sweets, HD, and me. We hiked together as a precaution for bears. Played some hiking games, talked about belief and reality. I tapped into some negative energy and retreated inward. I pushed up a climb to a lake where the others caught me. We set up and had dinner, though the mosquitoes were quite bad so I retired early. Found sleep easily.

Woke up and caught up on writing. Then got out and pushed to a creek where I took a break. Pushed on to the border of Yellowstone National Park. Pressed through along a river, quite mellow elevation change. Took a break and a hiker from the group I met in South Pass City caught me, Stats. Leapfrogged with him until I ran into Twig and Relentless!!! I haven’t seen them since Grants, NM. And though I could have hung out with them all day, we had miles to hike and they were heading southbound. I pushed along until I found a site. Intentions were set for a good day tomorrow.

Woke up and got out early. Pushed to a lake where I filled up and did some yoga. Pushed on and passed Stats. Had a bit of a climb and then pushed to a trailhead. I decided to hitch into Grants Village, one of the way stations of Yellowstone. I got in and just couldn’t motivate myself to go back and push the 20 more miles I had to do today. My socks were almost disintegrated and the next 20 miles are flatish forest, marsh, and lake shore, all mosquito hell. I couldn’t motivate myself to do that without patterns of behavior I wanted to move away from. So I decided to flip the script.

I hitched to Old Faithful Village from there. A nice older couple from Tennessee picked me up. Connected over the Blue Ridge Mountains as they got me there. I got some ice cream and set up to watch Old Faithful blow. Caught Link and we hung out for a bit, watched the geyser go, I did some more yoga. I wandered around some other geysers while Link went off for another geyser a bit away. After, I headed for the site on my permit. I feel really restricted by the rules and regulations of Yellowstone. This feels like a time when I actually feel able to give myself permission to not hold back. And I feel I have to in this place. Looking forward to getting out of here

Woke up and got out early. I visited the pit toilet, which was an open seat over a pit in the middle of the woods. It was quite lovely despite the mosquitoes. It was a nice hike down to Old Faithful Village, and there is a breakfast buffet at one of the lodges that I went straight to. I sat with Stats and another hiker, Armstrong, as we got our money’s worth out of the buffet. We were joined by another hiker, IPod, and then Sweets and HD. After satisfyingly gorging ourselves we went and watched Old Faithful go off. It is a neat spectacle, cooler understanding the geological process. A neater spectacle, though, was the amount of people. And this would be considered wilderness to a lot of them, with all the parking lots and refrigerated drinks. 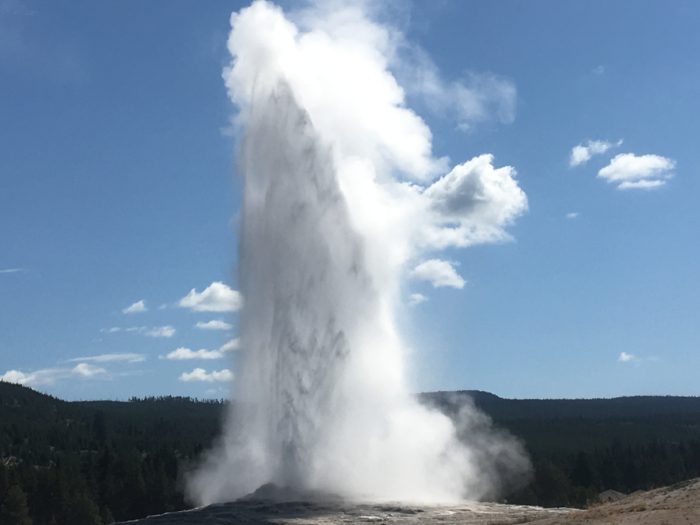 We resupplied at the store, had a substantial bubble at this point. Everyone from breakfast, Wraps and Link has shown up, and then other hikers, Dosukinta, Redfish, Lumber, Hobomax, and Fruitsalad. We all hung out for a bit. Hiking is inherently a solitary pursuit and I think we all enjoyed connecting with each other. Then we all parted, off to different things. 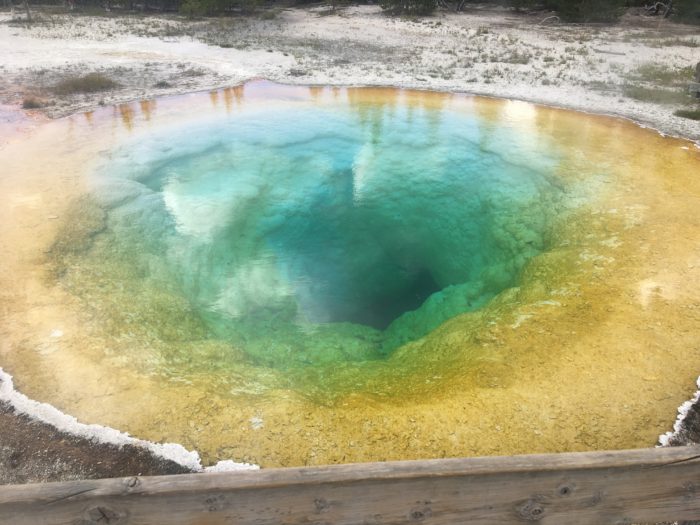 I walked through some geysers and hot pools. The landscape seemed not of this world. The different colored waters and grounds, the constant steam and rotten egg smell of sulphur. I could really visualize that I was in a massive caldera, with magma less than a mile beneath me and it was interacting with reality in such a strange way. I know how long a mile is; it’s not that far. Leaving the valley there was a steep climb and no people almost immediately. What “normal” person would consciously choose to hike up this steep hill? Plugged in until the site where I met up with the crew. Set up and got water before a massive storm came through. Cooked and wrote before bed.

Woke up and packed up. I was a little late getting out but leapfrogged with everyone. I was also hungry so I took more breaks today. Got to the Wyoming/Idaho border, and then the end of Yellowstone. Passed the cutoff for the Mack’s Inn alternate, which Link and Wraps were going to do. I believe I will see them again, though. Leapfrogged with Sweets, HD, and IPod until a spring. Had just done a long water carry so it was nice to get to water. Filled up and camped with the crew. Had dinner, watched TV, and went to bed. 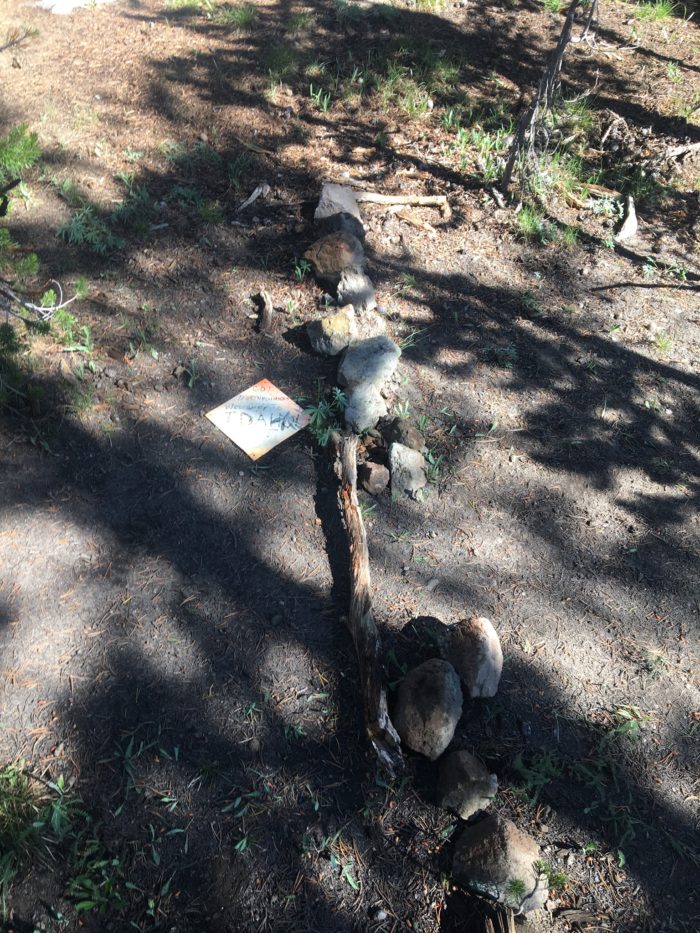 Pretty big storm last night. Packed everything up in the wet and cold. Pushed out early. Reached the border of Idaho and Montana. Then I pushed 14 miles to Targhee Pass. Walked along ridges and through meadows; it was gorgeous hiking. Almost no beetle kill so looking out it was mountains of living pine forests. Got some water and reached the pass. I laid stuff out to dry as I waited for my good friend, Gabe, to come meet me. We had planned to connect as he lived in Montana. We caught up over subs, chips, and soda. Left some soda for other hikers and pushed on. Gabe the only person outside of trail life that I’ve been able to share trail life with. Big climb, started in the forest. Good conversation makes for easy miles so we hung out. 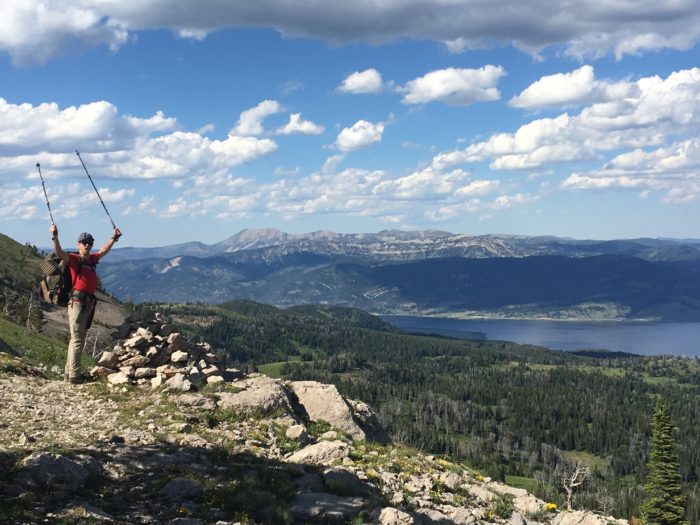 Gabe enjoying the views of the Centennials along the Idaho/Montana border.

Then we got to the ridges. Wow. We could see the Tetons far off in the distance, and a lot of Yellowstone. It was magnificent forests and legitimate mountains for truly glorious views. Walked the ridge in absolute awe till we came down into a basin with water. We filled up, set up camp, and started cooking when Sweets and HD arrived. Ate some bomb spaghetti and retired to tents as it was quite mosquito-y. 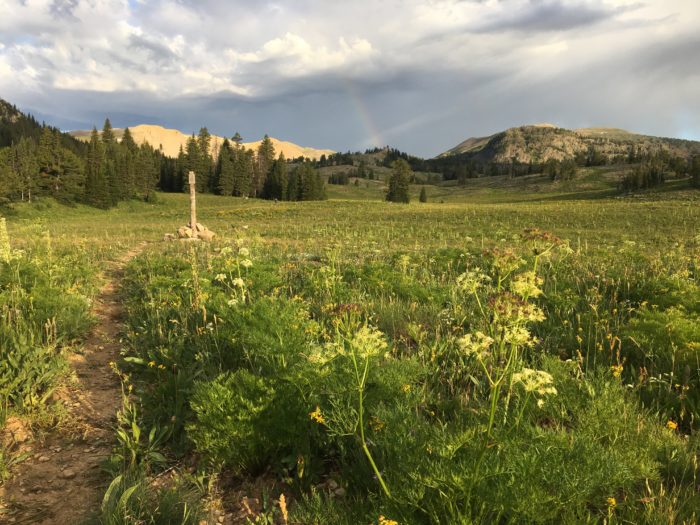 Woke up and got out early. Gabe backtracked to the car and I continued on up and over a pass. I took a break and then bombed down to a trailhead where we planned for Gabe to pick me up. The timing was impeccable as he pulled up. Then off to Bozeman. I had shown him my home and now was his turn to show me his. We stopped at a burger joint and chowed down on some goodness. 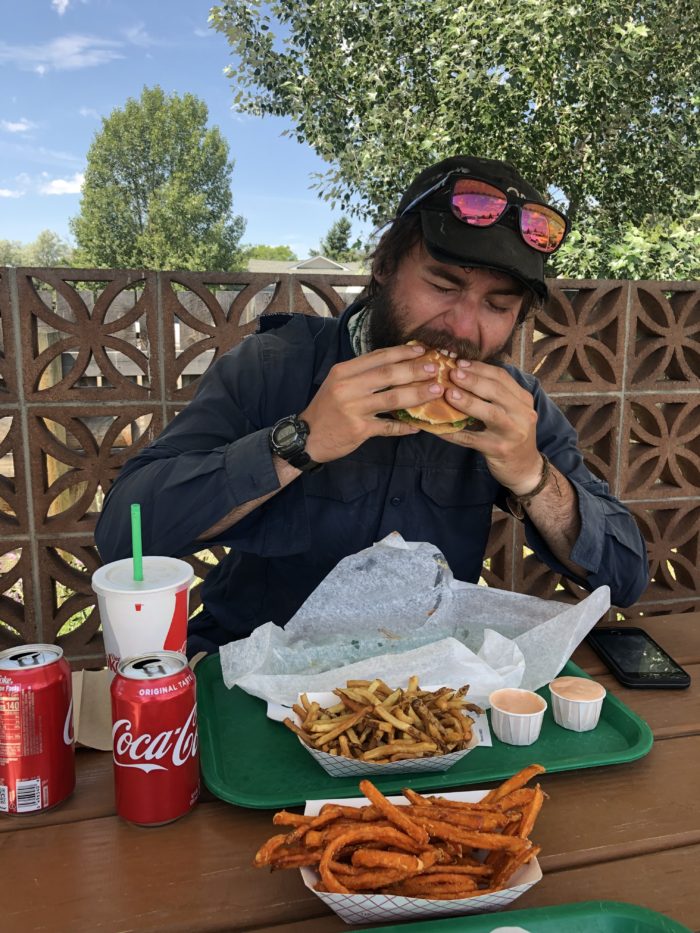 I picked up on some really good energy driving through Bozeman; seems like a cool town. Got to Gabe’s place and showered and laundered. He gave me some town clothes to wear and we hung out for a bit. Went downtown and I walked around with some ice cream as Gabe went to do an errand. Met back up and got some food. Then headed back and chilled for the evening until I fell asleep on a big, soft mattress.