It snowed and rained for most of my zero day in Chama.

Locals said spring had been coming, before this storm hit a couple of days ago. Leafing aspen and sprouting grasses were all dusted by snow. My friend Giggles was in town along with her trail family. I hadn’t seen her since before we both got on trail, so it was good to catch up on each other’s hikes. We also talked about the topic looming before every hiker in town: whether it was safe to enter the San Juans. This meant lots of staring at our phones and researching, very serious stuff. 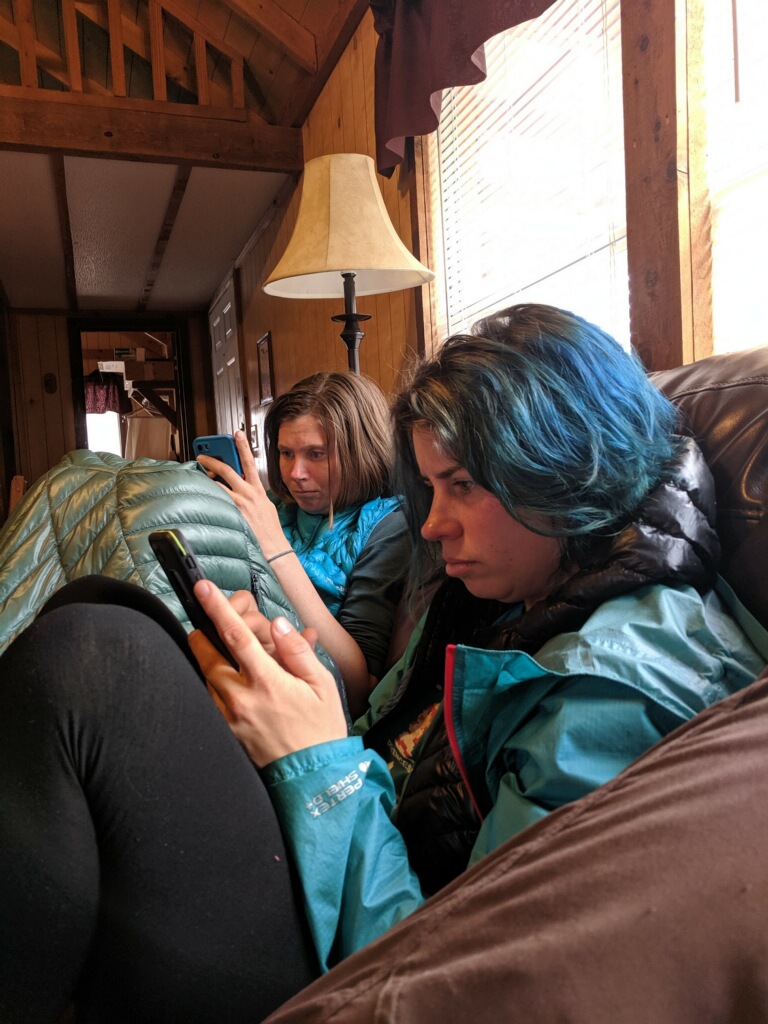 Both Giggles and I have AIARE 1 training. I took it the week before starting the trail, largely at her suggestion. While I’m definitely not a seasoned observer of avalanche risk, I feel like the course helped me understand the conditions ahead and assess safety, both of which were crucial with such a big, late snow year. It had been snowing in the San Juans off and on all of May, and here we were in the middle of another winter storm. It wasn’t looking good.

Over a couple of days, Josh, Giggles, and I made the decision to flip up to Wyoming and hike the Great Basin.

This would give us at least a week and a half in which to keep watching conditions in the San Juans. Jim, now known as Beast, was planning on doing the same, and offered us a ride. Josh and I had met him in the snowy section between Cuba and Ghost Ranch.

All of the logistics took a few days to sort out. Josh and I had a wonderful couple of days exploring Santa Fe, although it was a little strange playing tourist instead of hiker. We walked around downtown, went to the New Mexico Museum of Art, and connected with a friend of my parents. She very generously helped us out with a few of the pieces of the flip-flop puzzle, including storing our snow gear while we were in Wyoming.

Jim rented a car and we all drove up to Laramie, where a local trail angel and her 12-year-old son scooped us up to bring us up to Lander. It was a four-hour drive, and incredibly kind of her to bring us all that way! We took the scenic route through the Snowies, stopped at a pizza place in Saratoga for dinner, and arrived late at night. 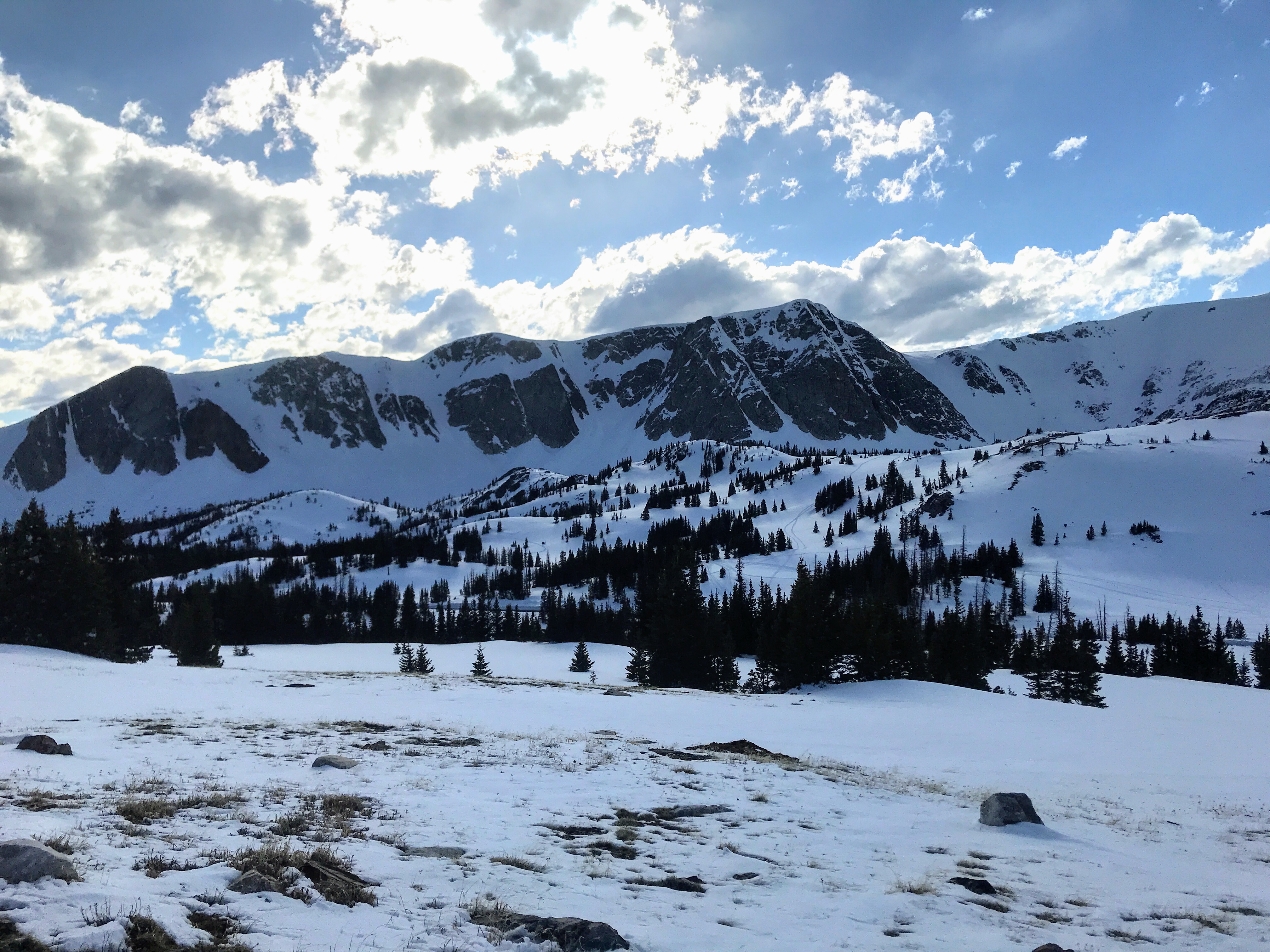 In Lander we stayed with a woman who another hiker friend put us in touch with. She let us crash in her living room and made us breakfast. We got to cuddle with her sweet black lab mix, Nali, which was a big plus.

At noon on Sunday, after four zeros, we were finally back on trail!

There was no snow! Amazing. It felt like a vacation from the CDT. We hiked along a dirt road up and down low, rolling sagebrush-covered hills. Within the first mile we played with a young cattle dog pup taking his first walk with his foster mom. In South Pass City Giggles and I geeked out reading all the interpretive signs about miners past. Outside of Atlantic City we stuck our thumbs out and caught a ride the three-quarters of a mile, crouched in the back of an open camper shell. When the guy giving us a ride told us to be careful of his reeds because he needed them for an ethnobotany class, I knew he was alright. 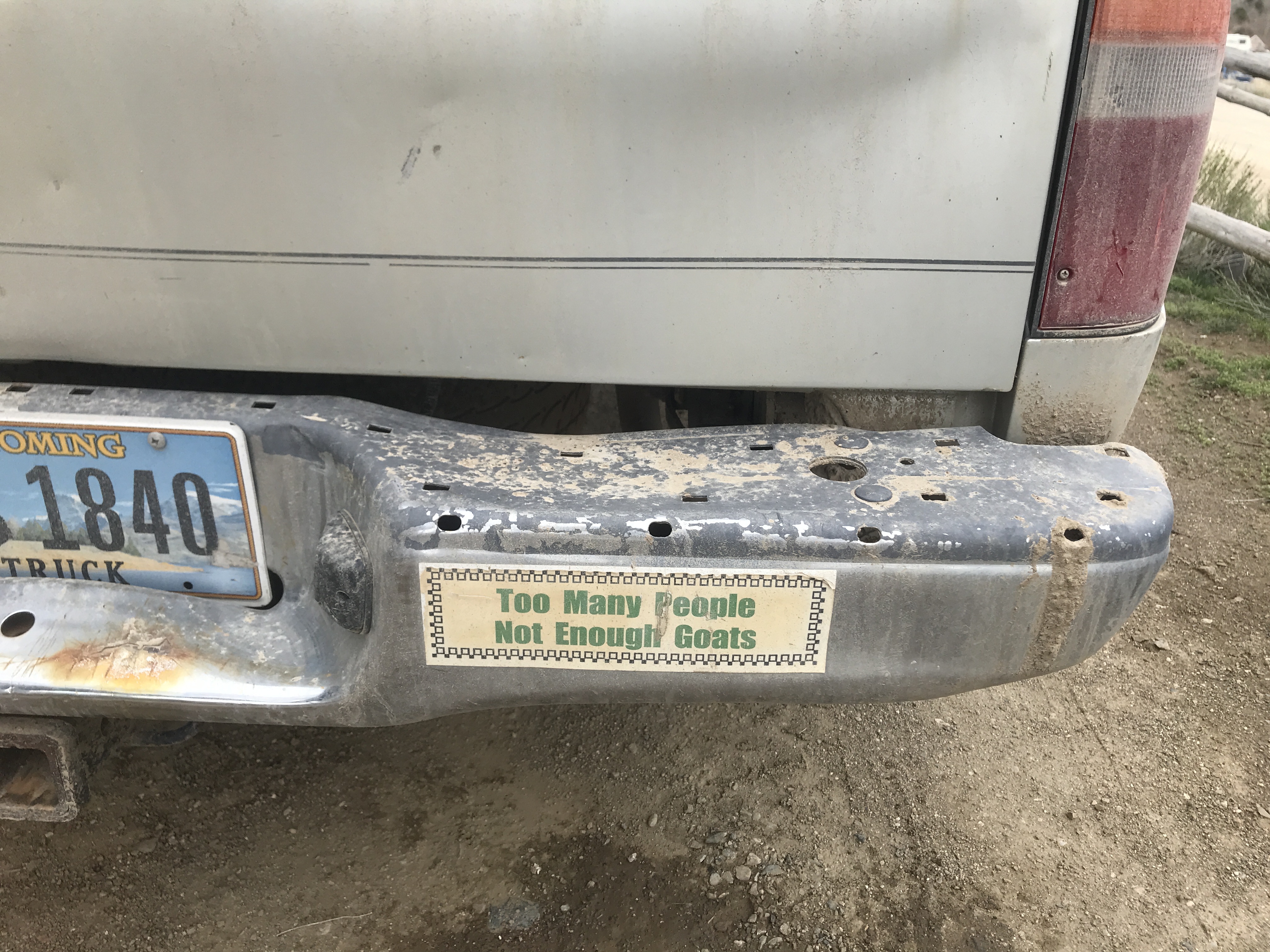 His name was John, and he came back and talked to us as we finished up our burgers and brownie sundaes at the Atlantic Mercantile. Turns out he’s been playing old-time piano at the Merc for decades, and he used to work as a wildlife biologist studying high altitude ungulates and pika in the winds. He gave us a ride back to the trail later, once we had finished our food and he had finished his laundry next door.

That night there was a big thunderstorm after we went to bed. We woke up with everything wet and wandered our way through the trail-less sagebrush for a while, eventually finding a dirt road.

Most of the hiking in the Great Basin was on dirt roads. The sky, still cloudy, decided that rain was the next step. I fell behind Josh and Giggles for a while and found them standing in the rain talking to two people in a very dry car, who complemented my umbrella when I walked up and then drove away. Josh and Giggles said that they had spoken too quietly to be understood and that they had both gotten through the conversation by smiling and saying “yeah.” 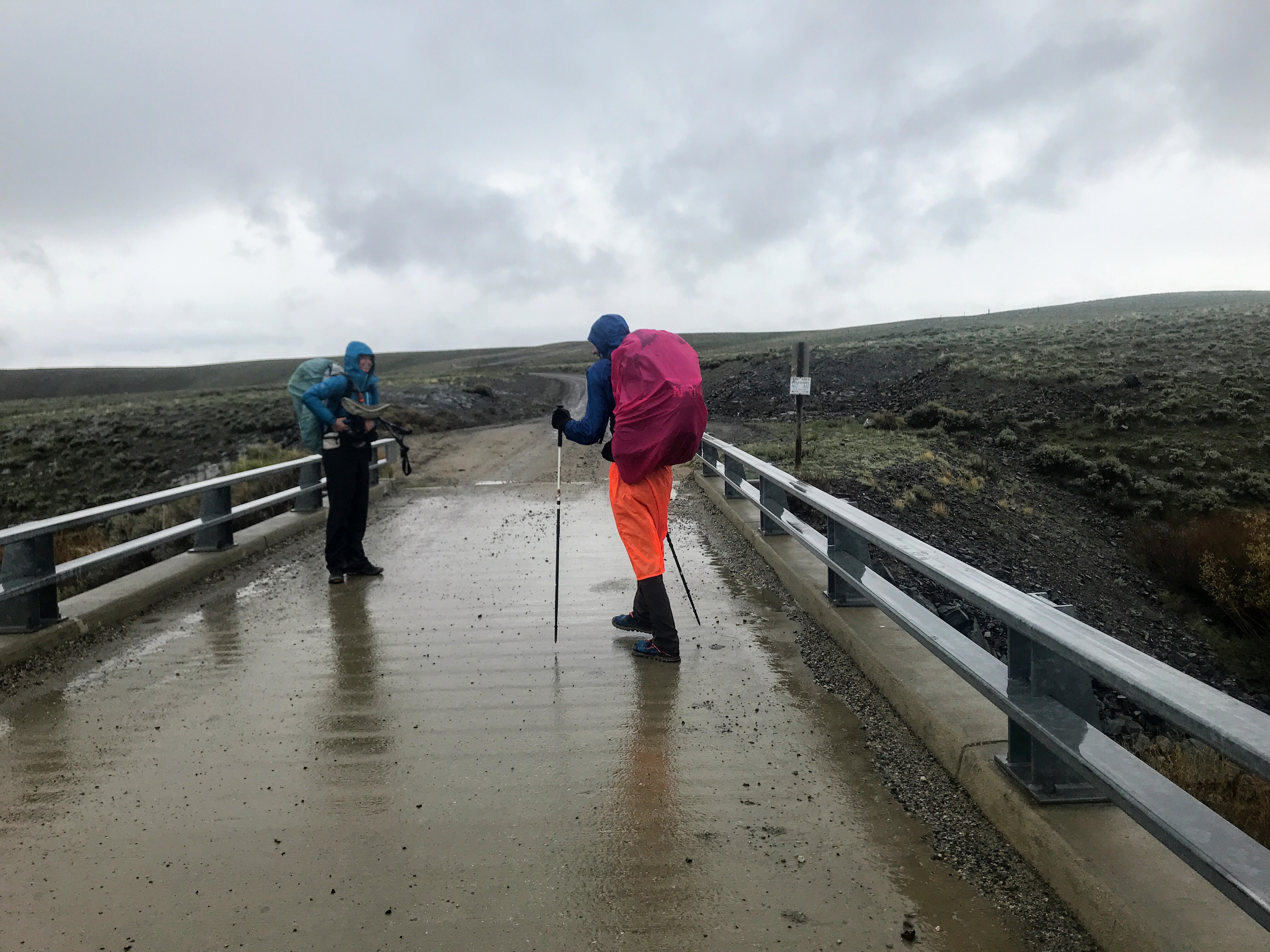 In the evening we found a water cache at what I would call a large sign with a mini roof and a cow fence all the way around, and what others might call a kiosk. There was even a register and some candy! I had a lot of M&Ms and Sour Patch Kids so I didn’t take any, but I appreciated it.

Worried about the weather, we found camping in a protected but not flat spot by a large rocky outcropping. There was so much elk poop it was like a weeklong elk rager must have happened. Giggles was using a tarp, requiring us to be more picky about our site selection than usual. This was the only protected spot for miles around, and so I pitched our tent on the most flat least poopy spot.

We didn’t actually see any elk in the basin, but we did see a lot of antelope, every day.

Usually in the distance running away. With their white butts bouncing, they looked like bunnies with long spindly legs.

It was cold in the morning, but we made some miles before the bad weather rolled in. Light rain became medium rain and then the wind and cold turned it into something else entirely. My umbrella was useless, and my Helium rain jacket, being old, wetted out pretty rapidly. I found Giggles waiting miserably near a water source where we filled our bottles and moved on quickly. 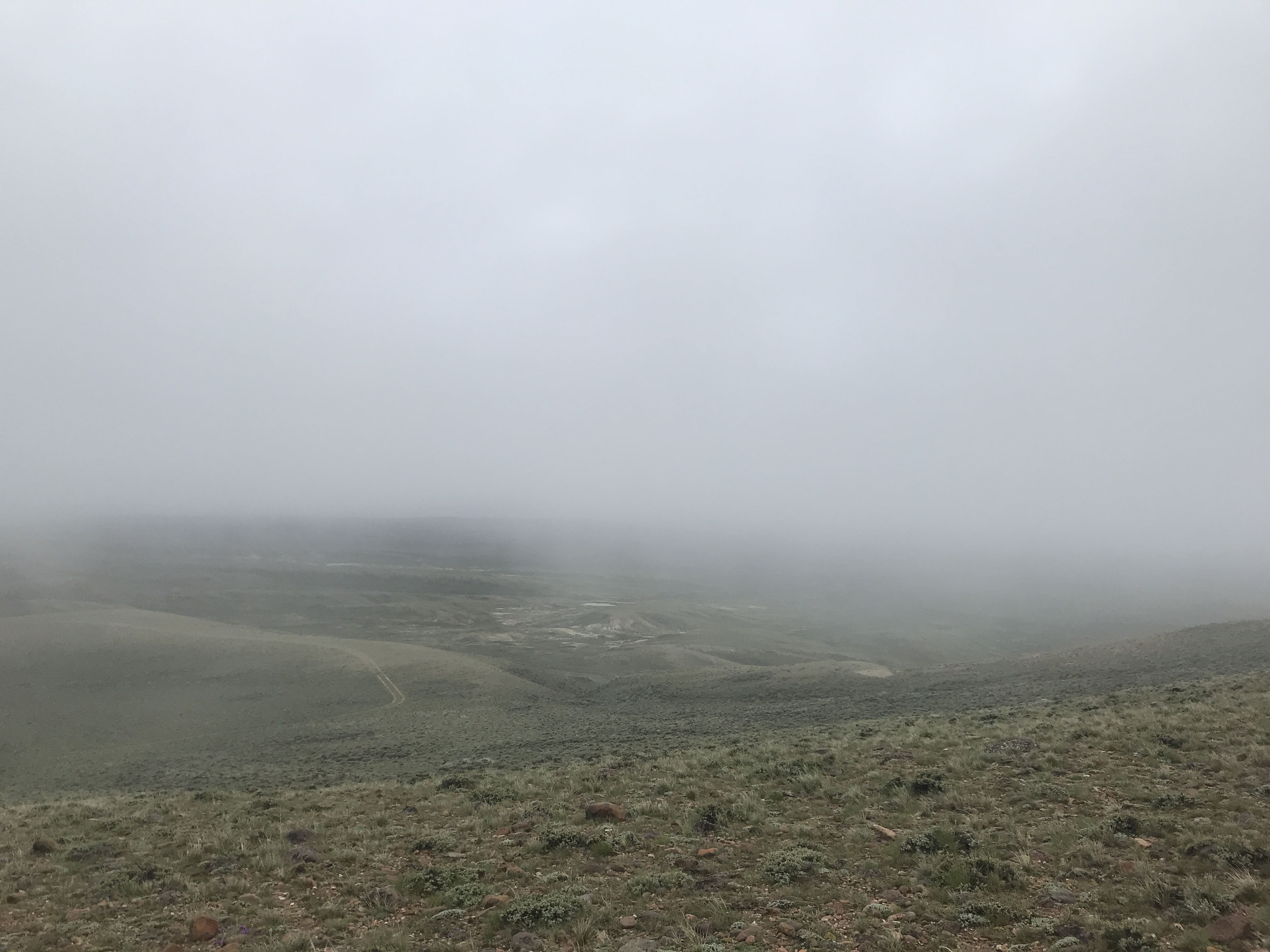 The next time she was waiting she looked even more cold and wet, but I was hungry and I knew that I would need to stop hiking and eat at some point. She said that if we were going to stop then she would need to to set up her shelter and get warm. We decided to push on a little way and then set up camp to wait out the weather.

It was 2 p.m., and the weather never improved.

Giggles ended up with a strong tarp pitch that weathered the storm excellently, even though her fingers were half frozen when she tensioned the lines. Josh and I shared a vestibule with a large dried-up cow patty. There was hail, snow, and more rain through the night. Our tent floor flooded and there was water moving from the foot end to the head end of the tent. It’s about three years old, and I think the waterproofing decided to call it quits.

We got a late start in the morning because we tried to dry out all our gear in the weak morning light. A couple of miles in we ran into two other hikers going north, Moonshine and Paya. They had also cut their day short because of the storm, and were still breaking camp. Giggles and I stopped a little later when the sun was brighter to finish drying things. 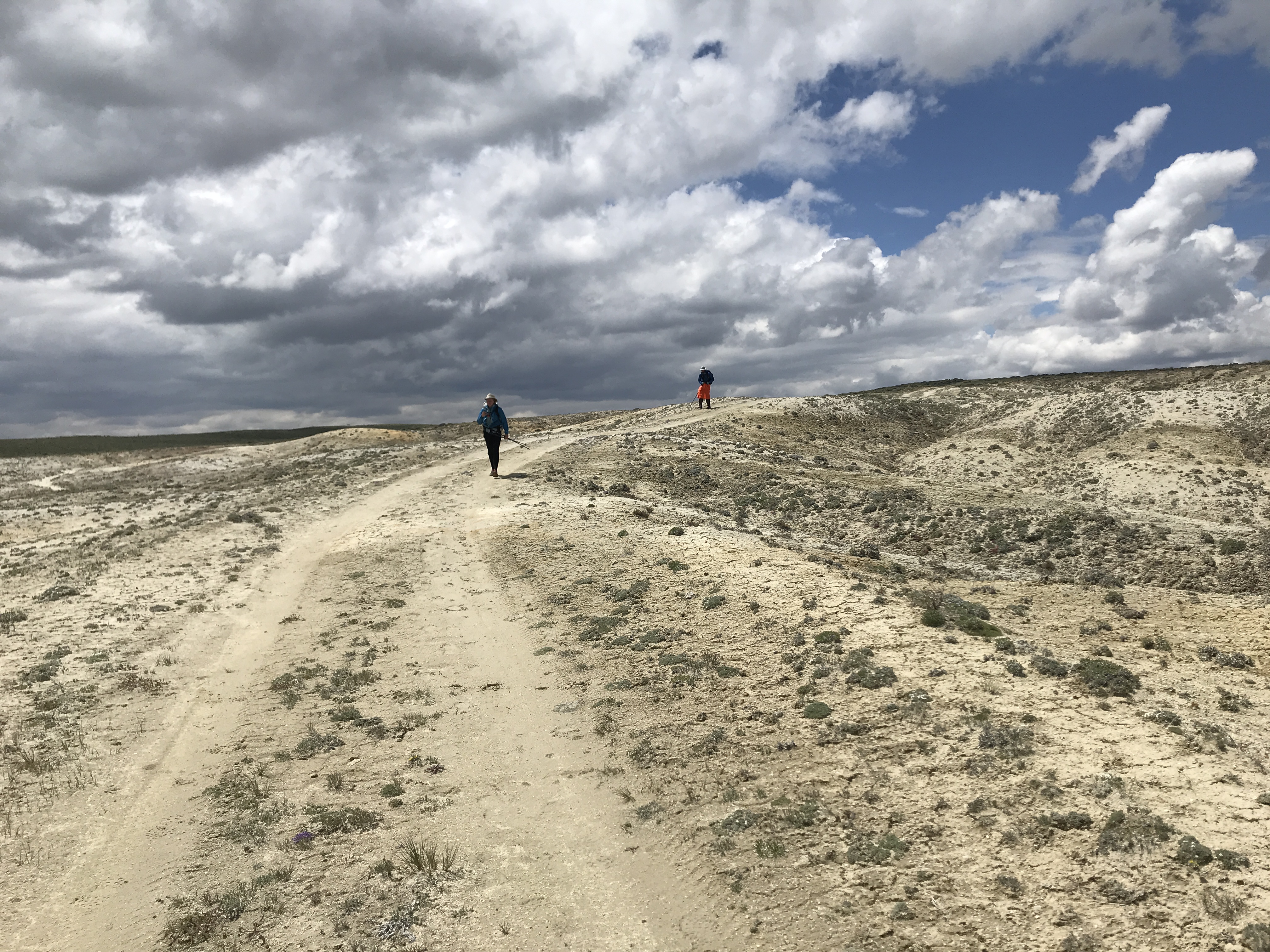 After lunch, at a sunny sagebrush-ringed spring, we saw a group of wild horses that included two foals. Painted and chestnut. They ran away as a group and watched us from a ridge. Late in the afternoon we hiked slightly off trail to a big clear pond that Josh swam in.

The light was golden and we hiked opposite a beautiful sunset, pushing on until dusk, when we found a flattish spot in a field. 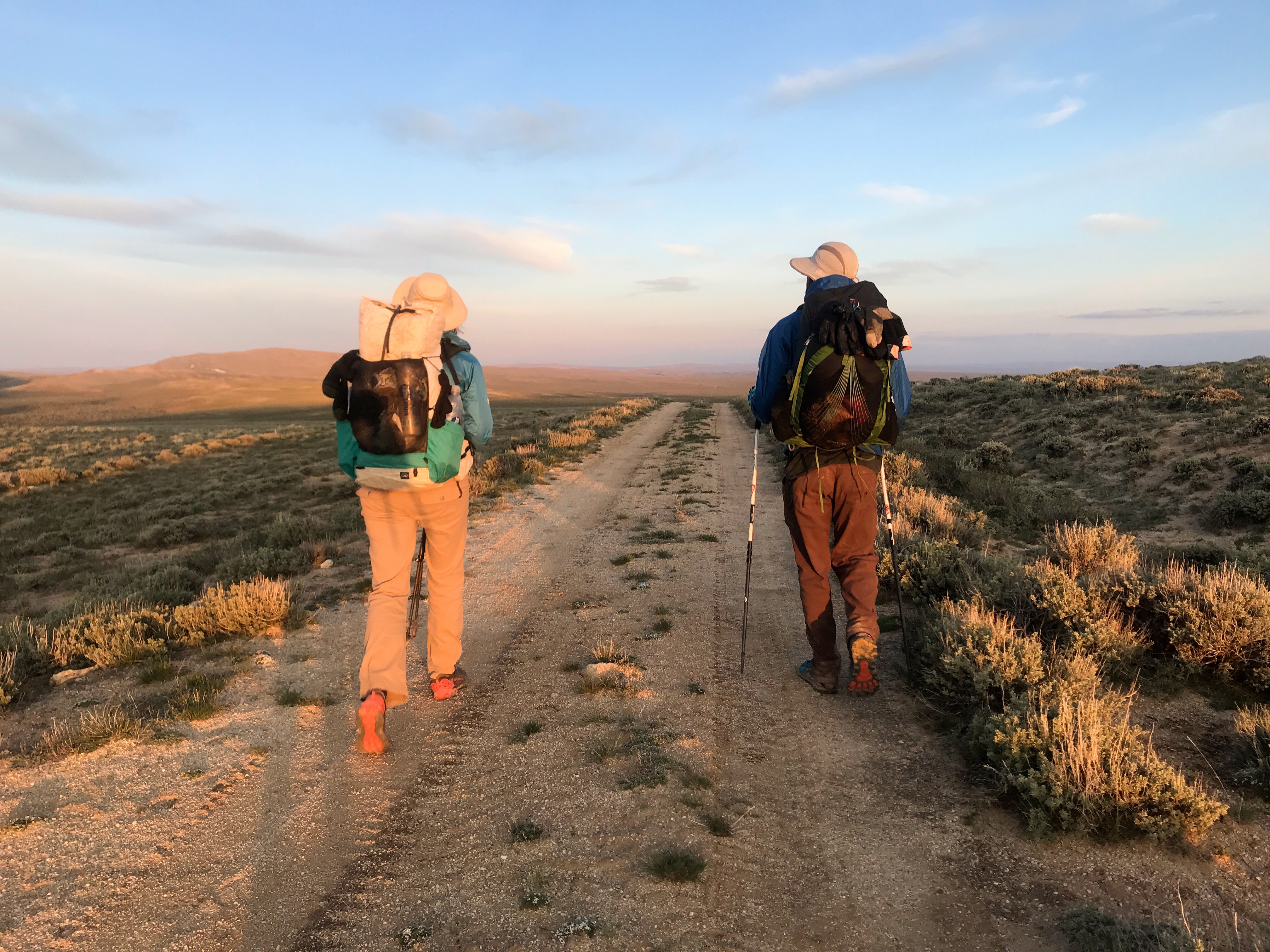 Giggles, Josh, and I hatched a plan to make it into Rawlins the next day, which would mean hiking 35.8 miles. None of us had brought that much extra food and the half day we took because of the storm had thrown off our schedule. We woke up at 5 a.m., ready for a long day.

A few miles in there was a piped spring, enclosed by a wooden fence. The three of us took a break and I watched a redwing blackbird come by for water.

We counted 296 cows that day, a blue ribbon record so far for the CDT!

One of the cows Giggles and I saw was a lady who wouldn’t stop mooing in a very agitated way. We thought she was annoyed by our presence, and we apologized for taking a break so nearby. After a little while another cow came closer and started nuzzling and cuddling her. She quieted down somewhat. Several minutes later her baby showed up and started nursing, and all was right in cow mama land again. We watched the black calf nurse for a few minutes before hiking on. 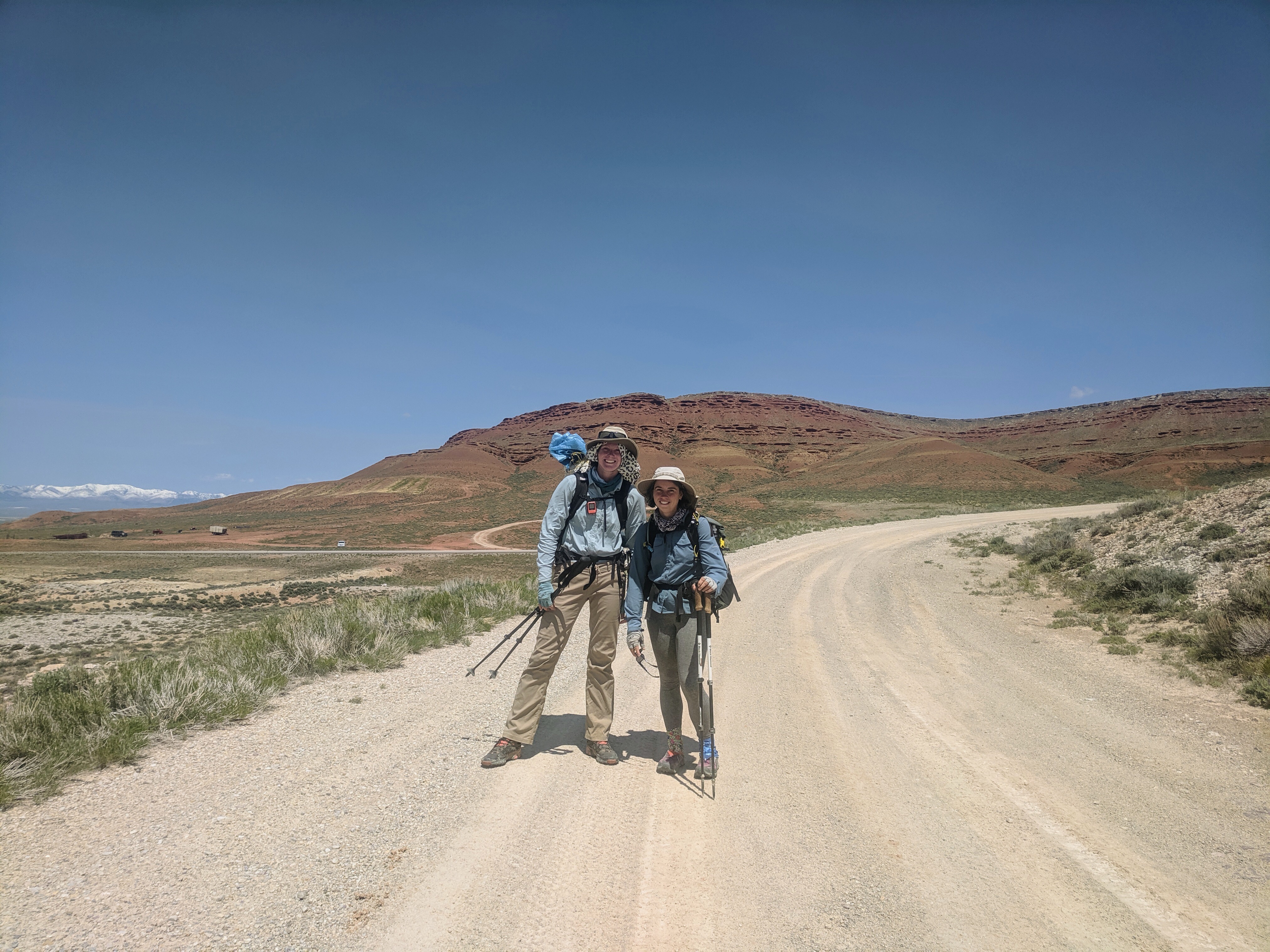 It was nearly sunset when we got to the highway, and I pushed myself to keep up pace with Josh and Giggles. I had some minor shin splint pain that had been switching sides over the last couple of days. We turned onto the road that would carry us most of the way to the hotel and there was a bike path next to it. I started jogging because it hurt less, it felt like it used different muscles in my sore tired legs. Passing Josh and then Giggles, I picked up speed all the way to the Pizza Hut, where we stopped for dinner.

I was so tired I could’ve slept right there on the comfy green faux leather booth seat.

But I didn’t, we made it to the hotel, where we ran into Jim/Beast and then stayed up too late looking at our phones and watching The Nanny on TV.