Josh, Giggles, and I zeroed in Rawlins so that we could figure out our next steps. The coming section was mostly the remainder of the Great Basin, but before getting to highway 70 the trail gains elevation, going into the Sierra Madre mountains in Medicine Bow National Forest. However, highway 70 still hadn’t been fully plowed and opened to cars.

Beast, who was staying at the same hotel as we were, came with us to the all-you-can-eat Thai buffet to talk through options. He and I figured out that the road was plowed up to a gate 5.2 miles from the trail crossing. This would make it doable as long as we could arrange for a ride from the gate.

Beast had also done some sleuthing and discovered that the local transportation authority was working to open the road as soon as possible.

Over second plates of pad see ew and red curry, Beast arranged to meet Josh, Giggles, and me 12 miles before the highway. We would do the snowy last few miles together and then get a ride into Encampment from a woman who owned a B&B there.

I spent the afternoon resupplying, doing laundry, and attempting to apply Nikwax spray-on DWR to Josh and my leaky tent floor, along with my rain jacket. We did this in the parking lot in the company of a number of wooden creatures.

We got a slow start and didn’t hike out until afternoon the next day. Giggles, Josh, and I had decided that from Encampment we wanted to go back to Santa Fe. We wanted to be ready to go north from Chama if the snow pack stabilized enough. This meant making sure we had all the right gear for wet and cold conditions, plus camping on snow. I had a lengthy shopping list and was looking at adding a few pounds to my pack.

Half a foam pad, extra fuel to melt snow, rain pants, my Melly fleece to wear while hiking, a sleeping bag liner, and so on.

On the way out of town I walked along a paved road behind the others for a while, talking to my parents on the phone. I followed them both onto a dirt road that wound up into the hills. Giggles has a few thru-hiking challenges to complete, one of which is to walk backward for a mile, and she decided that this would be a good time and place. Josh and I helped her avoid puddles and a couple of ATVs that drove by and looked at us weird.

A few miles later, we realized that the alkaline water situation we had heard about in the Basin was upon us. There were ponds and creeks a plenty, but because they were surface water, they were all suspect. The next good water, according to the Ley maps, was at Muddy Creek 28 miles later. I had about three-quarters of a liter, and I immediately became very thirsty. We kept walking and I got more thirsty, trying not to drink.

A couple of miles on, I caught up to Giggles and Josh staring at something: it was water! A puddle, on a large sandstone rock!

Josh got out his extra trash compactor bag, and he and I took turns scooping the water out and pouring it through a bandana, then Giggles would filter it. We collected six liters and felt much better about our prospects. 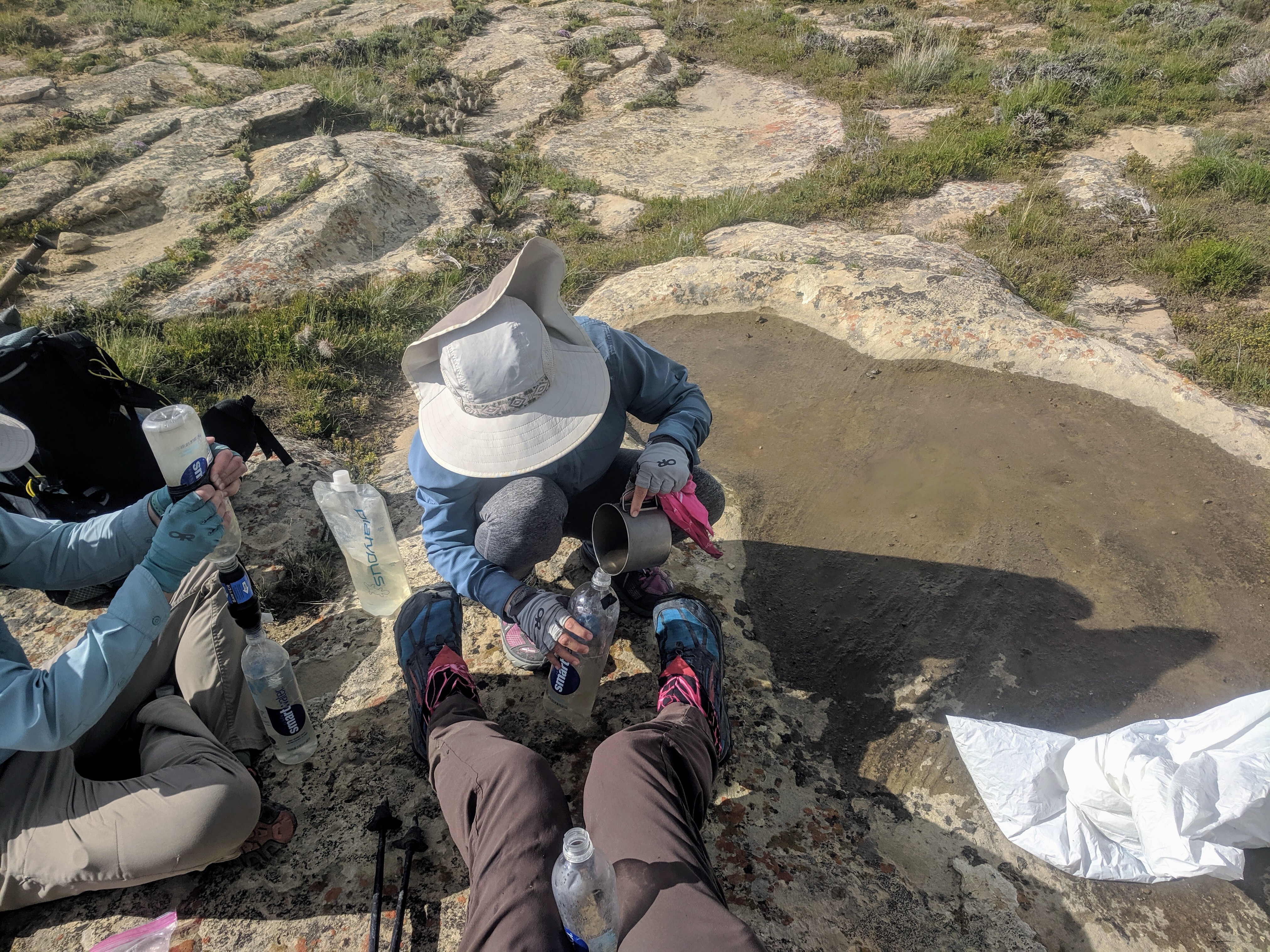 The rest of the day was fairly uneventful, aside from a rest area where every surface was riddled with bullet holes, and a thunderstorm that was hanging out nearby. We set up in the evening in a little hollow by a hill just in time to escape the rain and thunder.

The following day we hiked over Bridger Pass, which wasn’t much of a pass, and then by lunchtime we got to Muddy Creek. It was exceptionally muddy. Josh attempted a swim anyway, and shouted from the middle of the creek that he was above the knees deep in mud with only a foot and a half of water. 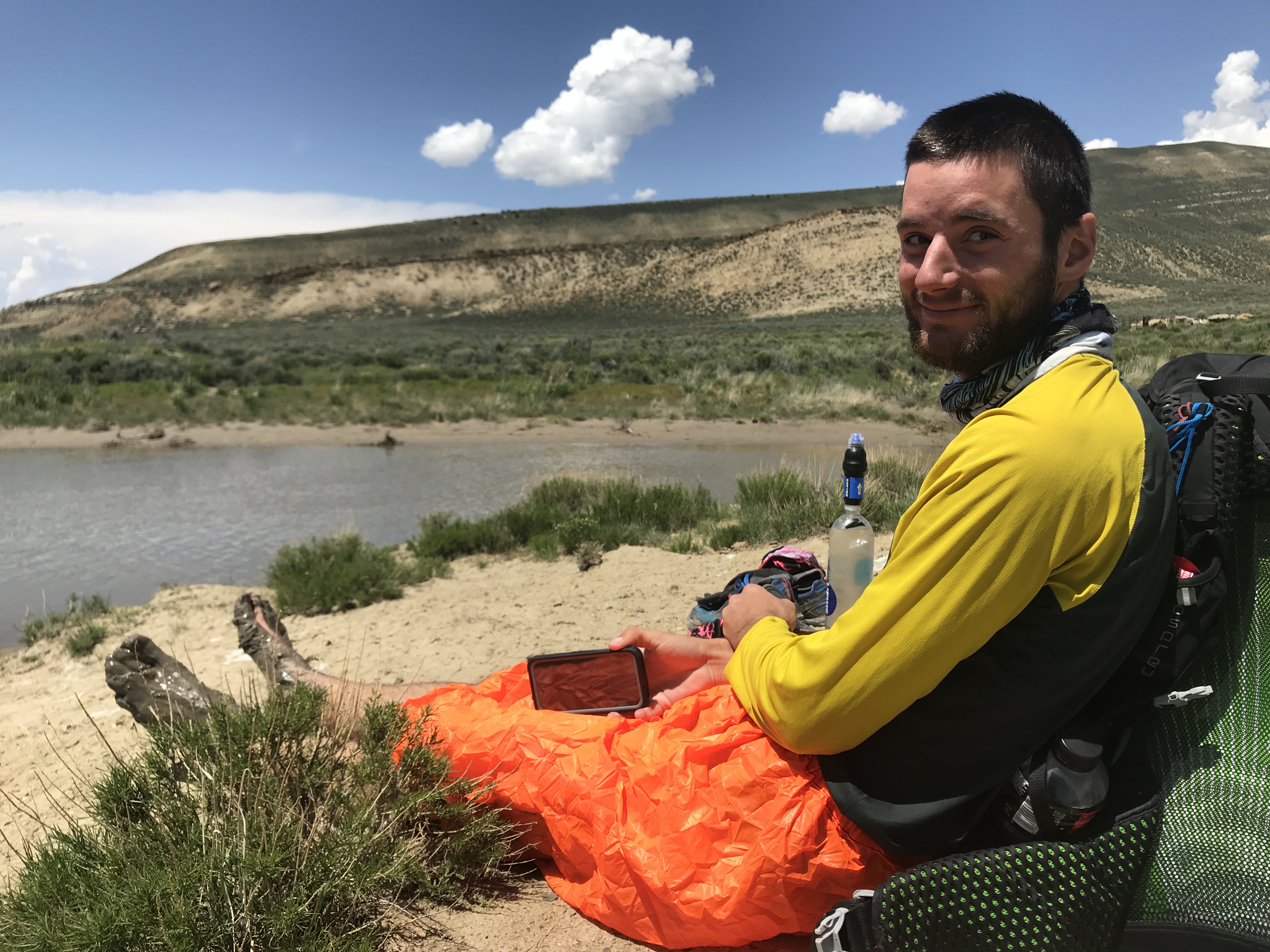 Towards evening we were hiking on what was supposed to be a Ley shortcut on a road, really a bushwhack through sagebrush and then willows, when another storm started edging in.

The three of us had just made it back to the dirt road of the official track when I felt an electric tingle in the fingertips of my left hand.

Lightning struck, close; I only saw the flash around me as I ran for the nearest bush a few feet away. The boom of thunder came almost immediately after.

Giggles, Josh, and I made for the scraggly trees just up the slope and each found a spot under a tree to sit, alone, while we waited for the storm to move on. We were there for 20 minutes or more, watching the flashes and counting, shouting to each other to check in every little while. I sat on my backpack, under my umbrella, trying not to get wet. Giggles yelled about seeing blue sky close but it was still raining. When we each counted 30 seconds between lightning and thunder we decided to keep hiking.

We loaded up on water at a spring and hiked until we found a stand of aspen nestled into a hollow by some low hills. None of us wanted to be out in the open if another storm came through. Assuming the worst each night, Josh and I kept everything in the tent inside trash compactor bags. Even though we had tech washed and re-DWRed the tent floor, I still didn’t trust it.

Sure enough, it rained in the night, and luckily our tent didn’t do so badly. Midmorning we dried everything out in the sun. This had become a daily ritual.

Who knew if there would be sun later? Gotta use it while you have it.

The three of us walked along a paved road for a mile or so. A bear with muddy paws had left prints going right across the asphalt. I wonder what they were hungry for, to come all the way down from the mountains. 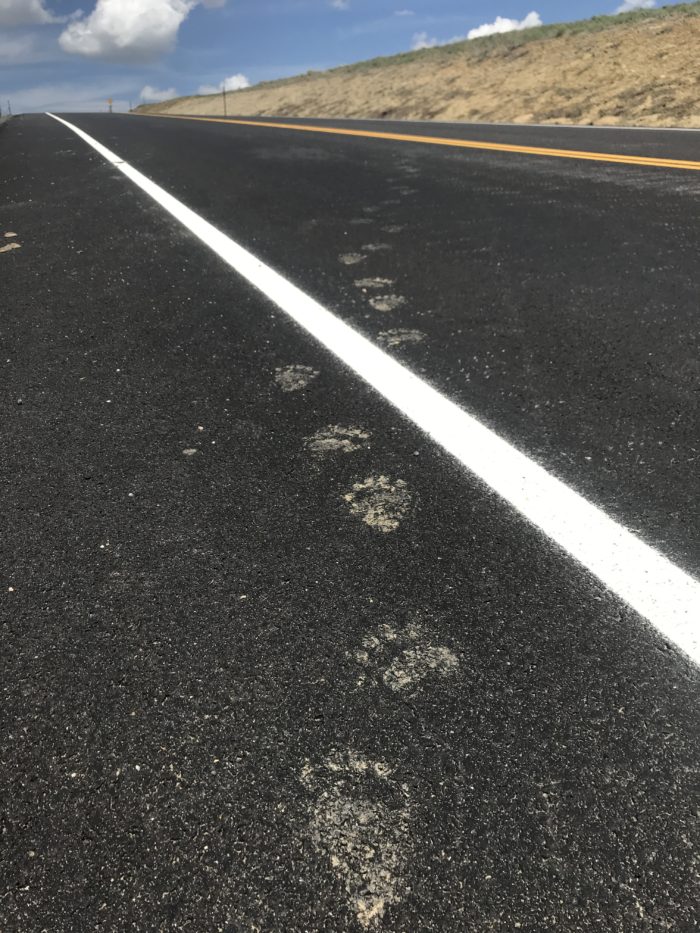 The paved road led to a dirt road, and the foothills of the mountains ahead came into sight. After walking the very low and gentle rolling hills and long flats of the Basin for 180 miles, it was a refreshing change. I passed a trailhead with signs for the Medicine Bow National Forest, and then the trail petered out. Josh found a use trail and we checked that it was going in the right direction: up. At the top of the ridge was a pile of exposed quartz, glittery in the late afternoon sun.

Giggles sat on it: a hilltop throne. 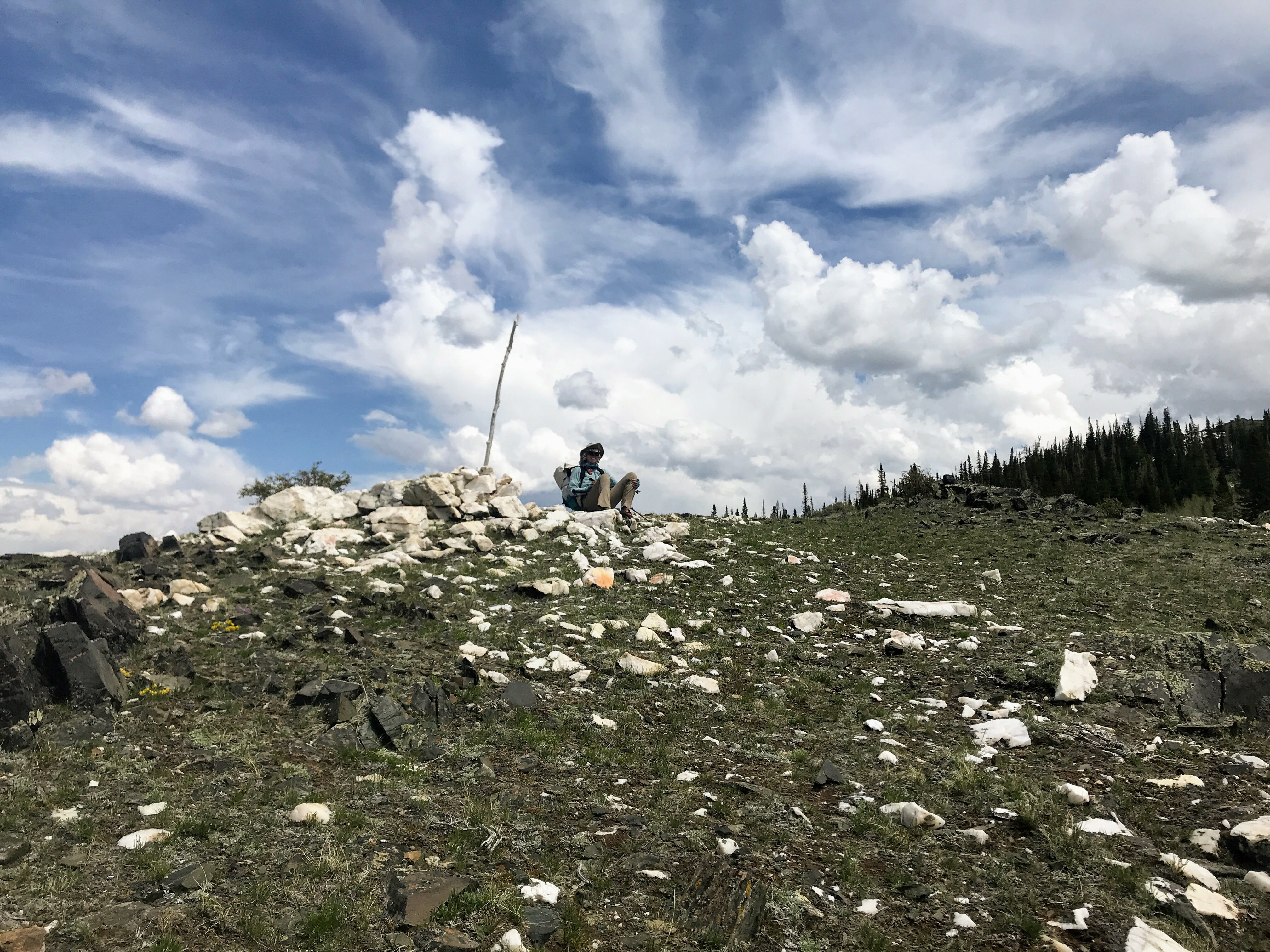 From there the trail brought us up and along the ridges. When the slope falls downward on both sides of the trail and the wind is blowing I feel like I could hike forever. The trail changed, though; we entered a muddy forest and I wasn’t so thrilled by wet feet. Beast was waiting for us at a road crossing so that we could find a campsite together. The last mile of the day found the four of us climbing over deadfall in the snow, postholing and slip-sliding along. The trailhead where we planned to camp turned out to be all snow.

Down the road a ways we found bare gravel road, and a bunch of other hikers!

They had gotten a ride into that spot and planned to hike north in the morning. They also had great news for us: highway 79 was open, and that meant we’d only have to hike 12 miles the next day! No road walk, after all. Giggles, Jim/Beast, Josh, and I woke up early and continued south into the snow. 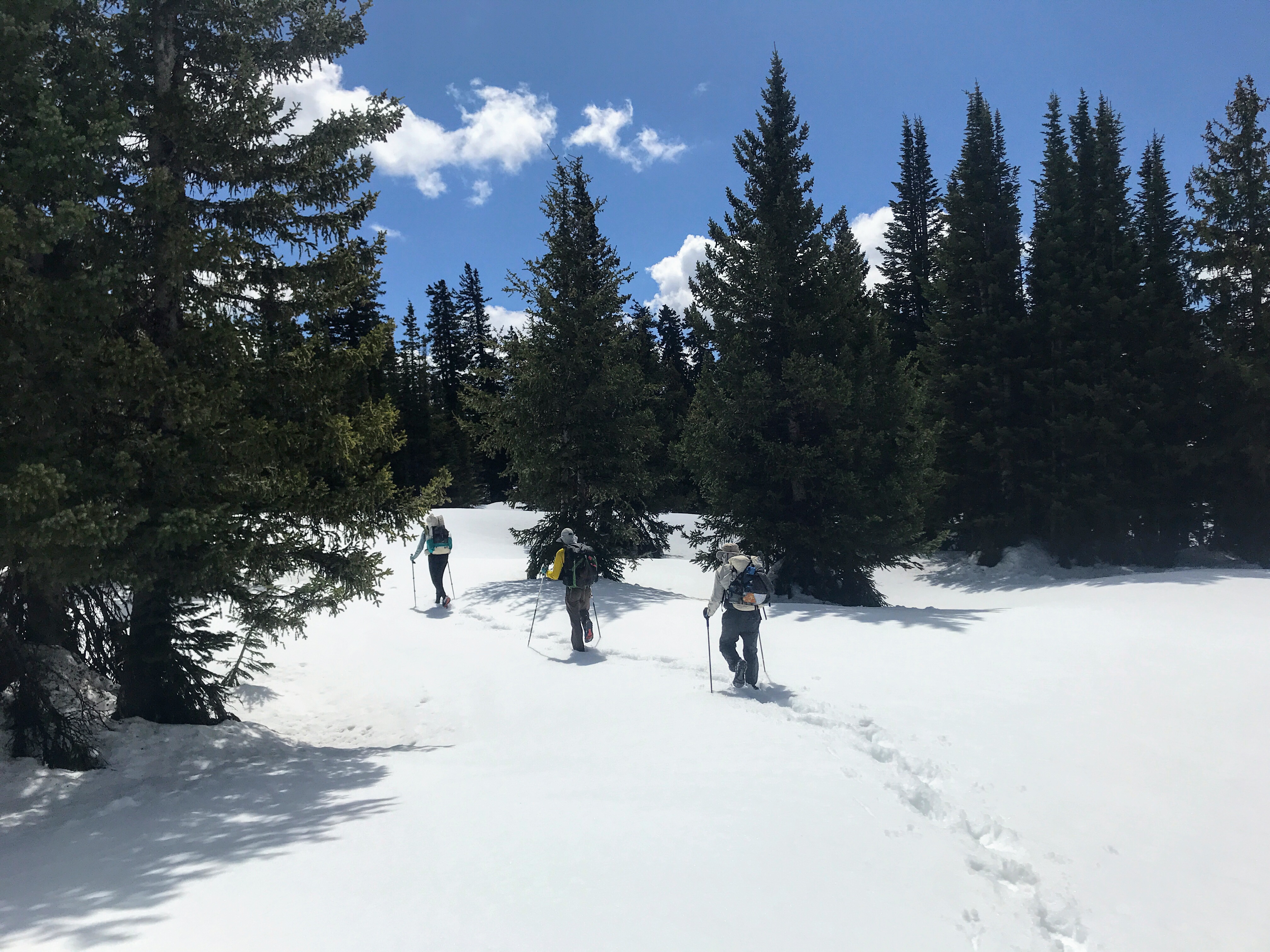 I think each of us was mentally prepared for a posthole-fest, and the snow really came through on that end. By 8 a.m. it was soft. We were taking turns leading, and it was exhausting work, especially the uphill sections.

In the afternoon the four of us were rewarded by a slightly off-trail summit of Bridger Peak, with fantastic views of the surrounding mountains. 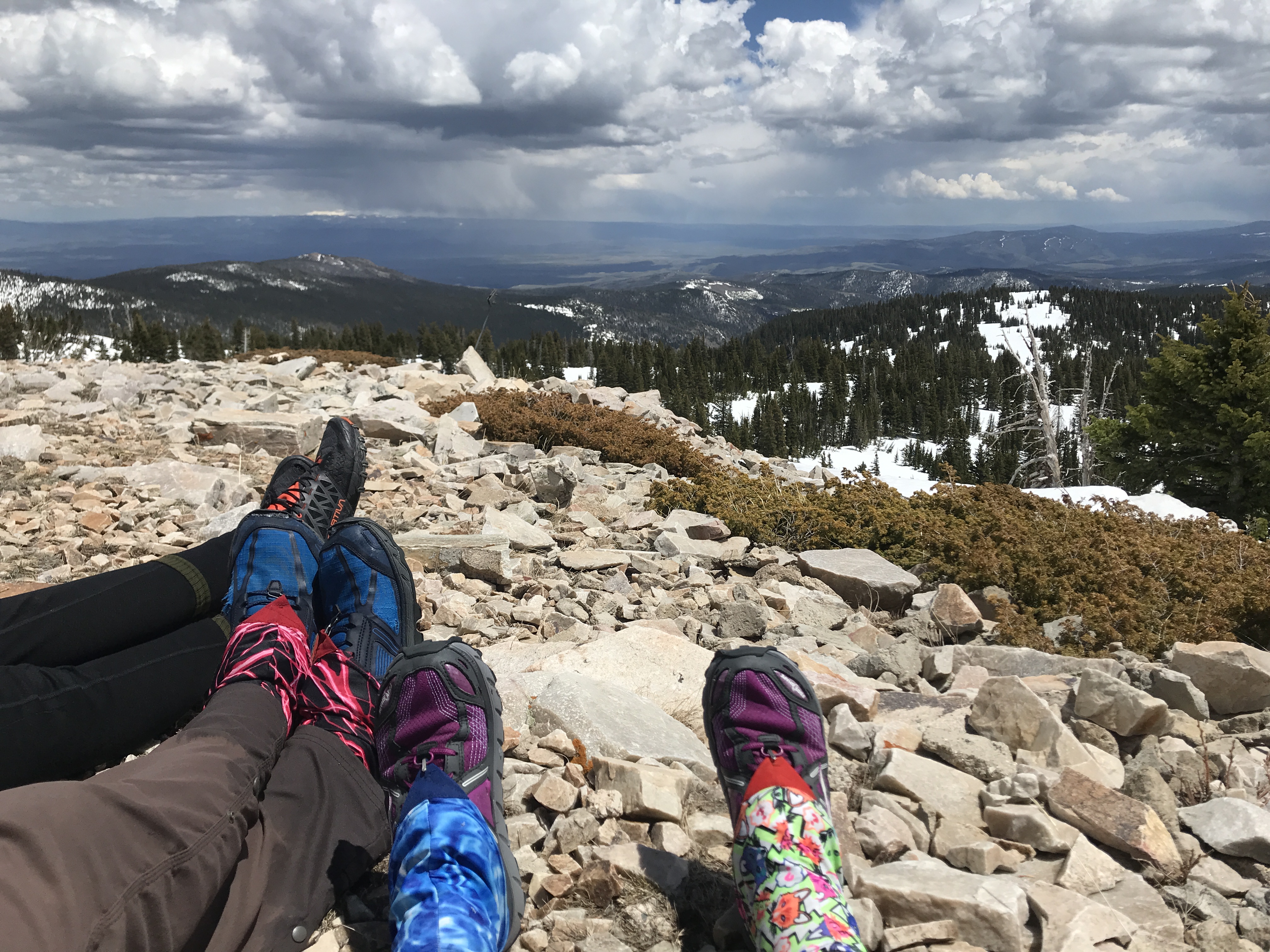 To the south lay Colorado, still socked in and wintry. The south San Juans were likely no different. The weight of the coming choice hadn’t yet sunk in for me. There were still a few miles to go before getting into town, and then we had to get to Santa Fe, where we would decide what to do. 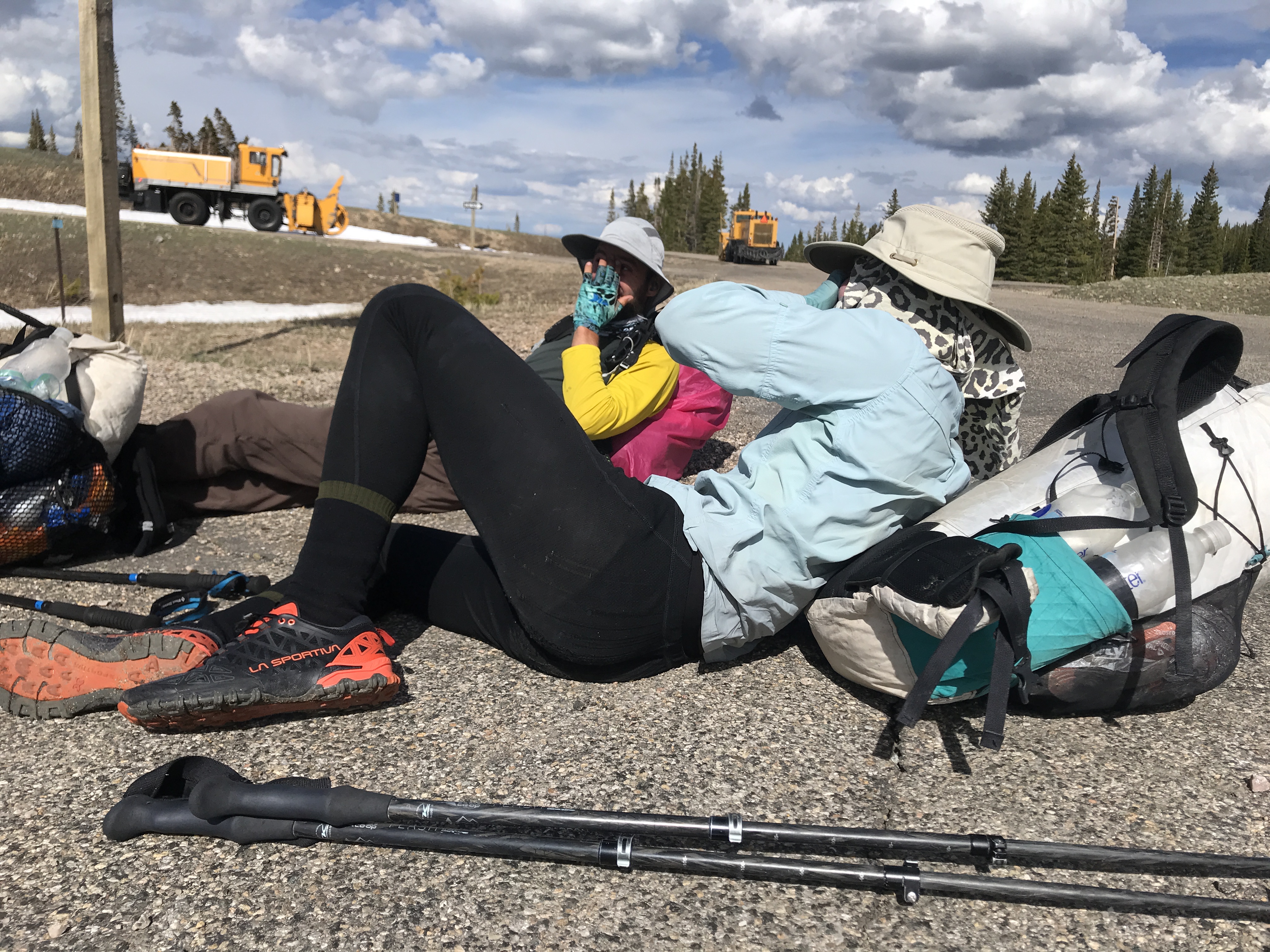 Lynn, from Spirit West River Lodge, picked us up at the highway. Giggles, Josh, and I splurged on a room for the night and were treated to a great home-cooked breakfast of biscuits and gravy in the morning. The next day we took a zero and saved some money by going across the street to the RV park. When Josh asked in the office about nearby hot springs, the woman at the desk found us a ride into Saratoga! The hot springs there are cement pools maintained by the city. They’re free, and it seemed like a lot of folks from the area go there regularly.

The next day, along with Beast, we got a ride into Laramie from the same trail angel who had driven us to Lander. Another rental car, another section of the flip lay ahead.