Great Strides is an occasional feature of The Trek exploring notable walks and walkers from history, literature, and film.

If not for the sleuthing of a famous Pacific Crest Trail angel, the dedication of a 90-year-old woman to her late father’s legacy, and more than a little serendipity, the story of pioneering early-20th-century hiker Peter L. Parsons surely would have been lost to history.

A decade ago, Barney Scout Mann — who with his wife Sandy, aka Frodo, has hosted thousands of PCT hikers over the years at their San Diego home — was researching a PCT article at Portland’s Mazamas Mountaineering Center when an archivist showed him a decades-old summit register from Oregon’s Mt. Jefferson. 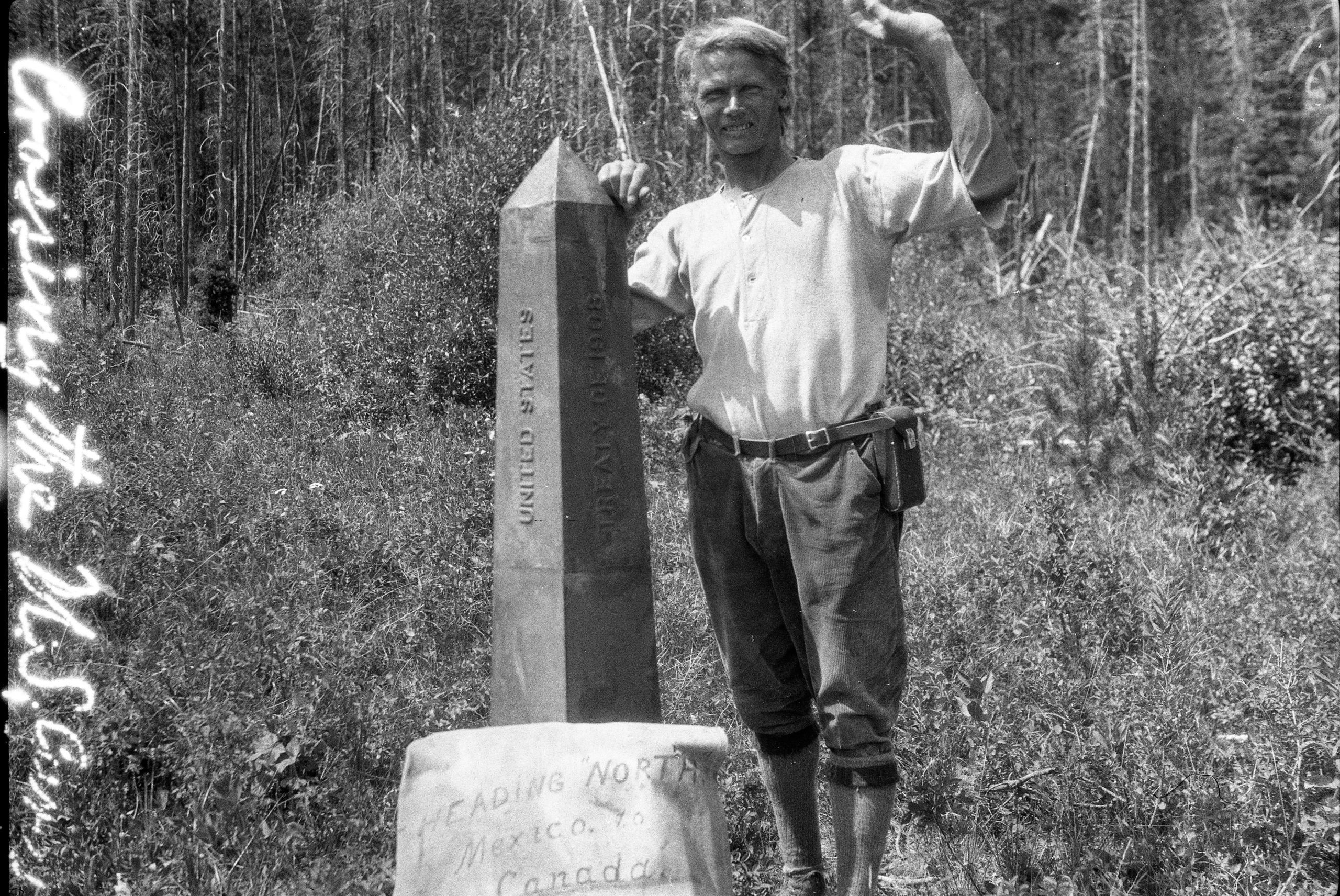 “I couldn’t believe what I read inside. The text suggested that someone set out to hike the Continental Divide in 1924,” Mann wrote in Backpacker magazine. “1924! ‘That’s absurd,’ I whispered in the library silence. The register was signed: Peter L. Parsons.”

“Many claim the Divide was first hiked from Mexico to Canada in 1972; others claim it was 1977. This register entry was the only evidence of Parsons’ journey. Did he really do it in 1924?” Mann writes in his 2018 book, The Continental Divide Trail: Exploring America’s Ridgeline Trail.

It would take Mann eight years to solve the mystery and confirm that Parsons walked something close to the route followed today by the Continental Divide Trail, nearly a half-century before anyone else claimed to have hiked the route. If not for his dedicated sleuthing, Parsons’ feat almost certainly would have been lost to history.

Parsons, a Swede, was 20 when he arrived in Portland, Oregon in 1909 with German immigrant Otto Witt, 20, a friend he’d met while working on a four-masted ship on which they’d sailed from Germany. After first being arrested for vagrancy, the pair ended up working at a lumber camp in the Cascade Range. 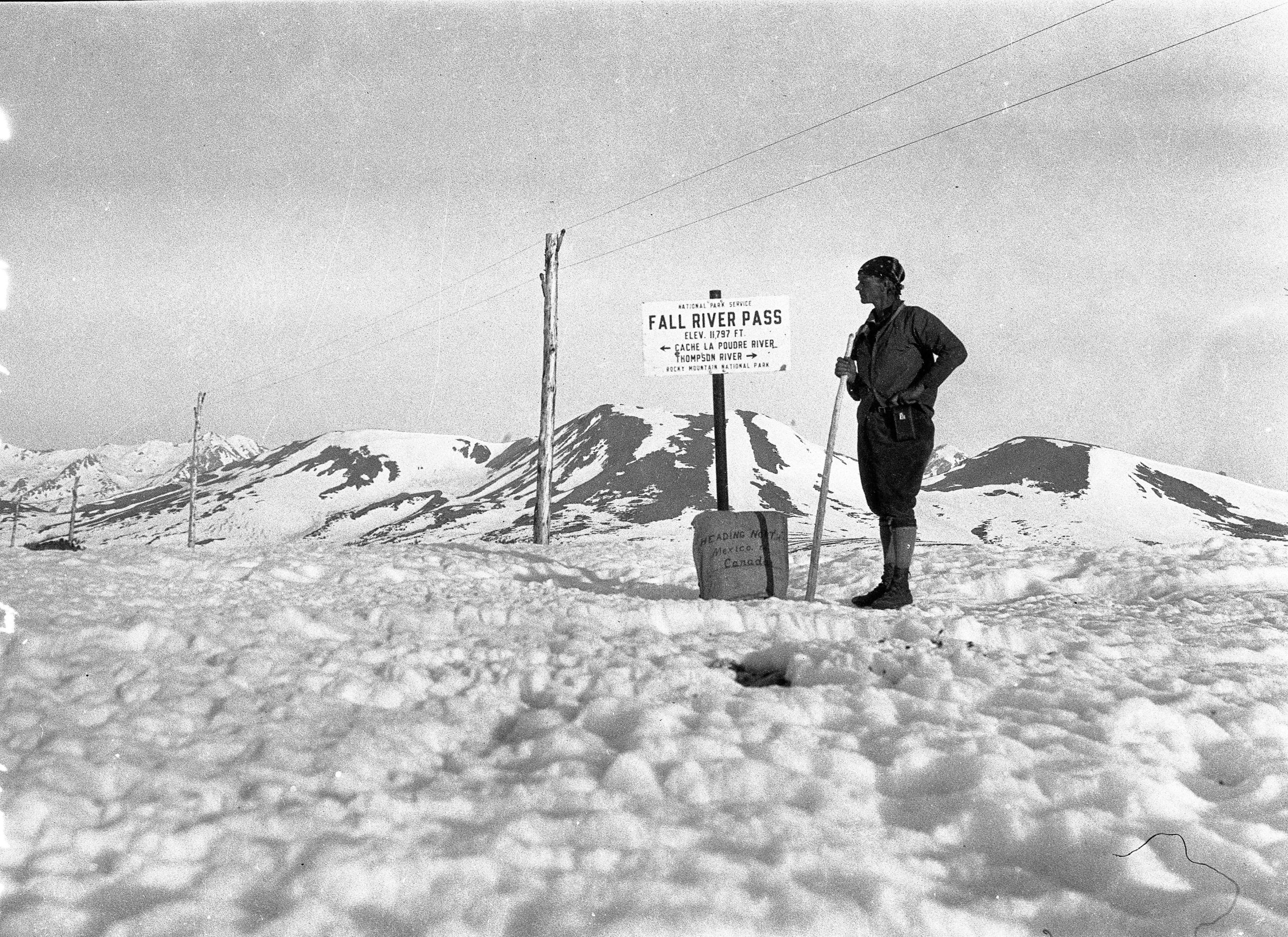 Inspired by the work of Canadian poet Robert W. Service — who wrote, “There’s a race of men that don’t fit in,/A race that can’t stay still;/So they break the hearts of kith and kin,/And they roam the world at will.” — Parsons soon began taking months off work to explore the vast open spaces of his adopted home.

Witt remained faithfully behind, serving not just as his friend’s stationary support crew during a series of ambitious adventures over the next decade, but also as his dedicated archivist for more than a half-century. Witt would eventually become the steward of more than 1,000 pages of Parsons’ writing and more than 700 photographic negatives.

Parsons went to Yellowstone, Yosemite, and the Grand Canyon; helped build the first fire lookout on Mt. Hood; and spent two winters running trap lines in Alaska. Then, in 1923, he embarked on the first of what we would now call a thru-hike, walking 1,300 miles from Detroit, Oregon to the verge of California’s Mojave Desert, approximating about half of today’s PCT. He stopped walking in the desert when he couldn’t find water.

“It’s best to give up,” he wrote in his journal.

The following year, he made up his mind to hike the Great Divide. Before starting, he wrote “HEADING ‘NORTH’—MEXICO TO CANADA” in three-inch-high text on the back of his pack. As always, he sent “Dear Friend Otto” letters all along the way.

Hauling a heavy load that included an A-frame tent, rifle, ax, frying pan, pots, wool sleeping bag, camera, and a “grub bag” stuffed with rice, beans, flour, peanuts, raisins, and bacon, Parsons walked 175 miles to Silver City, N.M. in eight days. His canteen froze at night and he had to traverse deep snow as he made his way north. 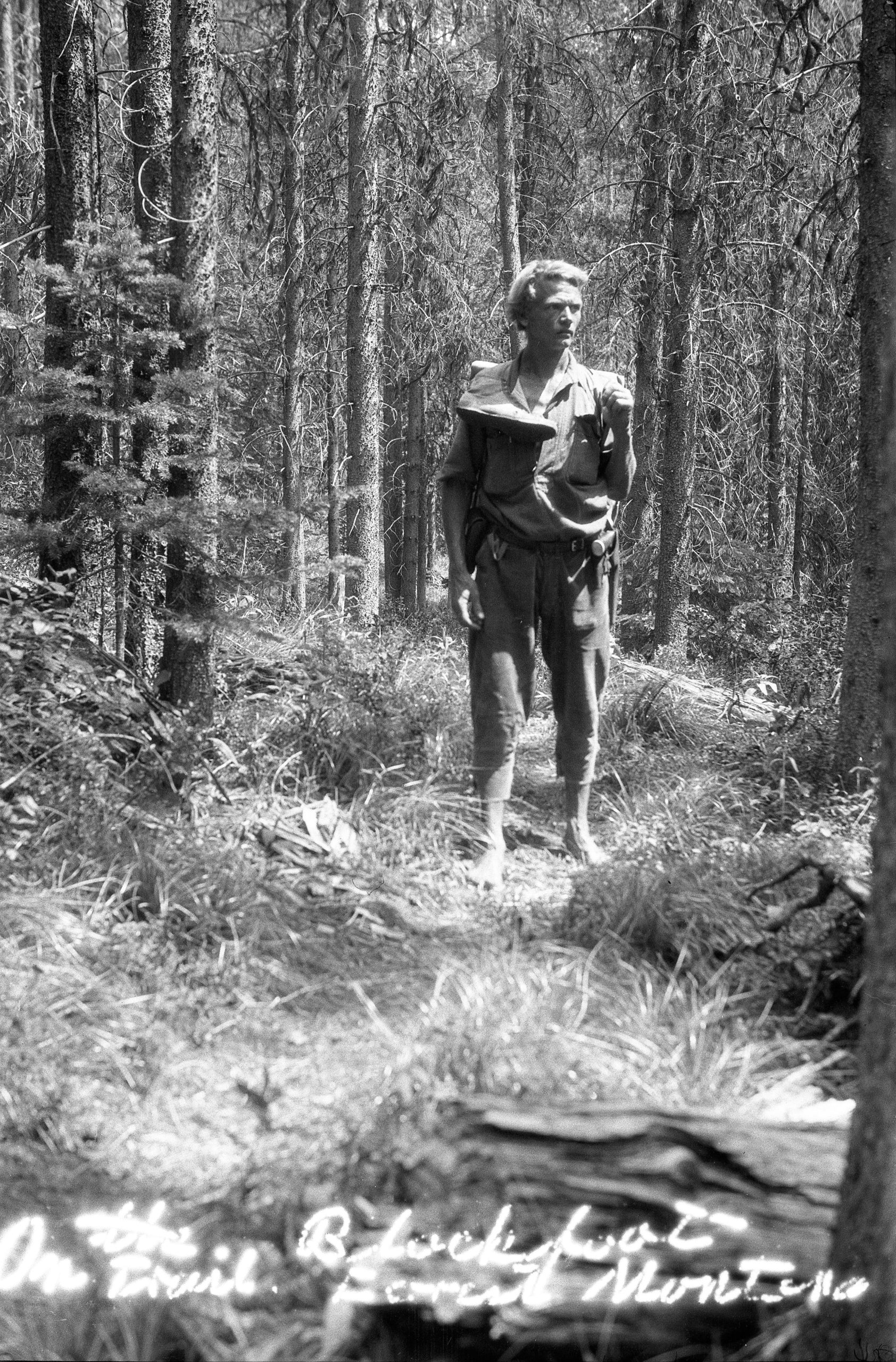 Peter L. Parsons hiking barefoot on the Blackfeet Indian Reservation in Montana during his 1924 hike of the Continental Divide. Photo courtesy Mazamas Library and Historical Collection.

“I don’t know where I am at but it doesn’t really matter,” he told a reporter.

In Jemez Springs, he was told that his proposed journey was simply impossible. It wouldn’t be the last time he heard that message from incredulous non-walkers, and in Chama, he was warned that snow in Colorado would prove an insurmountable obstacle for weeks yet, perhaps months. The next day he recorded that he was camping at 10,000 feet “among snowbanks six feet thick.”

Even in mid-May, he recorded that snowdrifts on the Colorado Divide were up to 20 feet deep. He fashioned his own snowshoes out of scrap lumber and just kept moving, ignoring doubters. In Wyoming, he smeared himself with a mix of pine tar and castor oil to keep the mosquitoes at bay.

And all the while, he was carefully documenting his steps with his camera. He even jury-rigged a remote shutter release, almost certainly becoming the first thru-hiker to snap a selfie on trail.

He was so excited when he got close to Glacier National Park that he celebrated by walking barefoot over “trail soft as velvet.” On the morning of July 8, he stood atop Triple Divide Peak. And then, instead of going straight home, he crossed into Canada, where he spent five weeks walking and riding trains before crossing into Washington and, just for kicks, hiking mighty Mount Rainier. 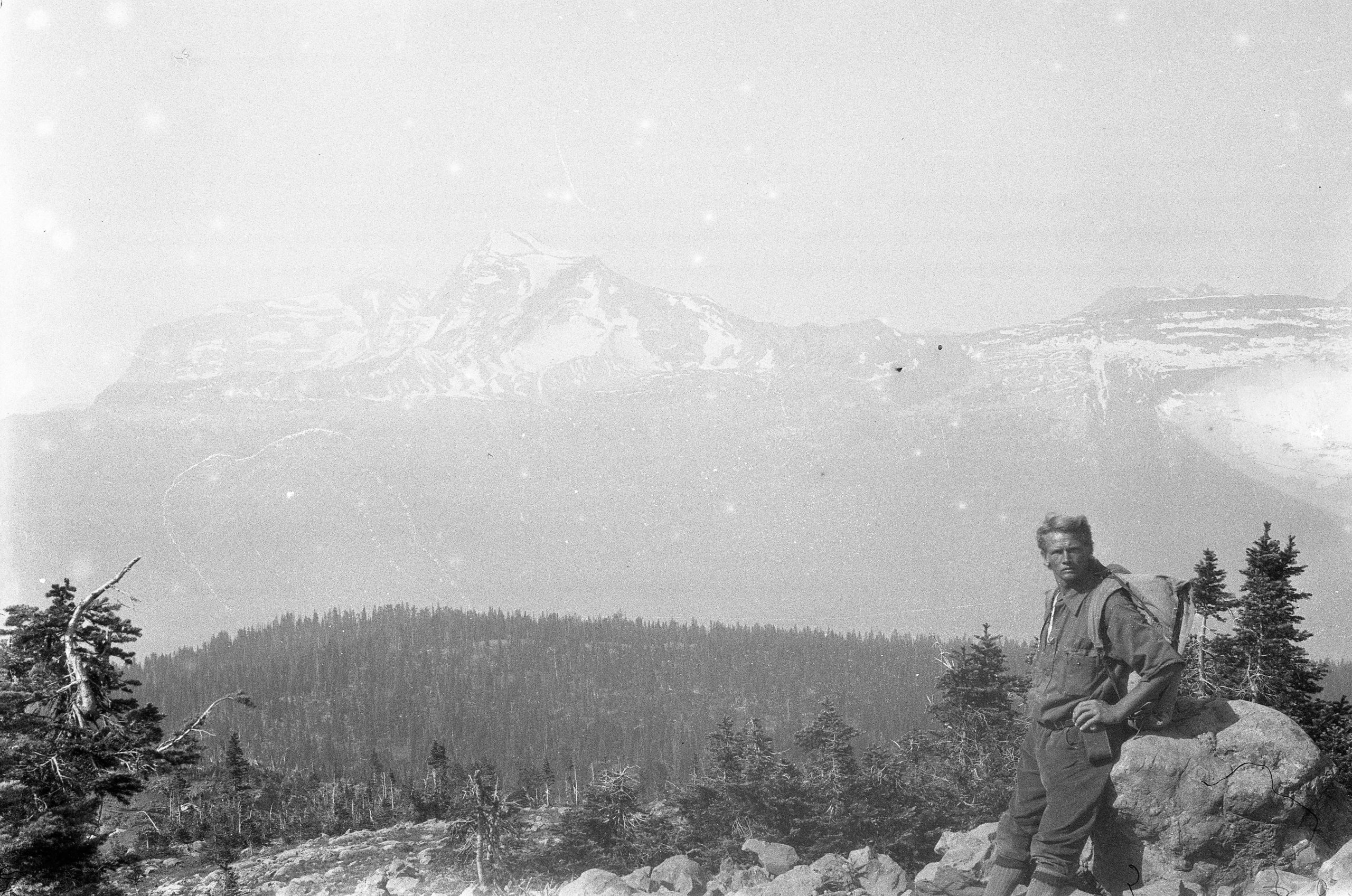 Peter L. Parsons hiked from the Mexico border to Canada along the Continental Divide in 1924, nearly a half-century before anyone else claimed to have accomplished the feat. Photo courtesy Mazamas Library and Historical Collection.

And then he climbed Mt. Jefferson, leaving the clue that started Mann down the road to unraveling the mystery nearly a century later.

“I started a hiking trip from the Mexican border April 12 and followed the Rocky Mountains north to Canada, then across to Mount Rainier, then south along the Cascades here. Four-and-a-half months on the way,” Parsons wrote on Aug. 26, 1924.

Parsons continued his adventures, trying, and failing, several times to self-propel from Mexico to Alaska, and even the Arctic Ocean, via foot and canoe. In June 1930, he wrote Witt a long letter from Peace River Crossing, Alberta, saying he planned to canoe the ominously named Rapids of the Drowned to Great Slave Lake and eventually, the Arctic Ocean.

Two months later, Witt received a letter notifying him that his friend’s body had washed up near the Rapids of the Drowned. Parsons was 42 and the circumstances of his death have led Mann to wonder if he’d met with foul play; no investigation was ever conducted.

“He was forgotten,” Mann writes, “everywhere but the Witt household, where Parsons lived on in the stories Otto told his daughter Ursula.”

While researching records through the North Santiam Historical Society in 2017, Mann learned about Parsons’ friendship with Otto Witt. He tracked down Witt’s daughter, Ursula Bassett, then 90, who had preserved the Parsons archive for decades after her father died at age 96. 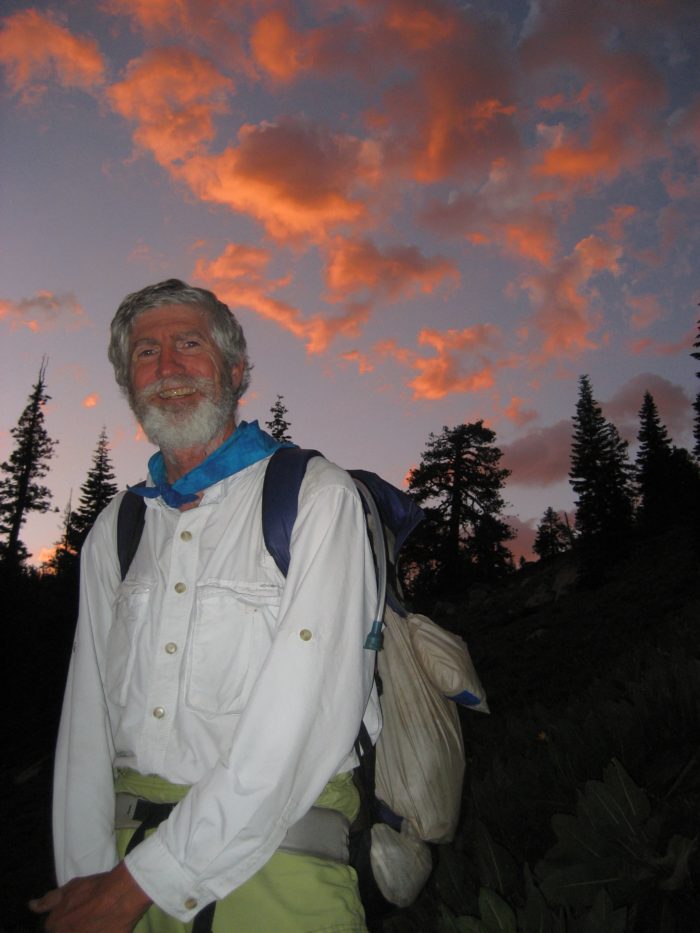 Barney Scout Mann in 2007. It took Mann the better part of a decade to unravel the mystery of proto-Continental Divide Trail hiker Peter L. Parsons.

“This was one physical way she could honor the memory of her father—taking over the preservation of something he found so valuable,” Mann writes.

In a “Note for Purists” in his Backpacker article, Mann notes that Parsons never claimed to be a purist — not even a concept at the time, when there was literally no CDT. The Swede aqua-blazed a few miles and accepted the occasional ride, but his feat far surpasses any modern attempt to hike the Divide.

“Parsons pieced together prospectors’ trails, old mine and timber tracks, railroad rights of way, long lengths of cross-country, and road-walking on two-lane highways. He was capable of 30-mile days and strung many together,” he writes. “Considering the era, the conditions, and his gear, I won’t be splitting hairs.”

Great Strides is grateful for the assistance of Barney Scout Mann. His detailed account of Parsons’ adventures was published in January 2020 in Backpacker magazine. His memoir, Journeys North: The Pacific Crest Trail, was published in 2020.

Thanks also to Mathew Brock, Library & Historical Collections Manager for the Mazamas Library in Portland, Ore. for permission to use photos from its collection.

Great Strides will be on hiatus for a few months in order to hike the Pacific Crest Trail. But you can still send questions and any ideas for future stories to [email protected].