Town! The internet! Perishable foods! Sometimes it’s hard to leave. I insisted on going to the bakery one last time. Josh called MSR to figure out the problem of our new tent body not matching our old tent fly. We left our resupply grocery shopping until after lunch, and Giggles, Josh, and I didn’t walk out until midafternoon.

I was on the phone with my brother, holding my grizzly roll (it’s a huckleberry cinnamon roll) and trekking poles in the other hand as we found our way onto a dirt road and back into the park.

Josh and I missed a turn, and had to backtrack by about half a mile. Then we saw a black bear (really a black one) take a look at us and shimmy up a tree. Giggles didn’t realize that she had passed us. When she got her shoe stuck in the mud she was unhappy and called Josh, who hadn’t put his phone in airplane mode yet. She waited for us and we walked together the rest of the afternoon, talking and pushing through the thick underbrush that crowded the trail.

It rained during our last hour of hiking. The trail left Glacier National Park at Marias Pass, and tomorrow we would be entering the Bob Marshall Wilderness, which I had heard was very cool.

We set up our shelters at Summit Campground and ate in our tents as it poured. Bear safety was less of a priority than avoiding misery at that moment.

In the morning Giggles went to dry her things in the parking lot, which had some large obelisk monument. When Josh and I went to join her, a couple came out from their RV to ask us what we were up to. They ended up filling up our pots with coffee.

We hiked down a muddy dirt road and found Stoke just waking up in his tent. He caught up with us later in the day as we were making our way, gradually, through a few miles of blowdowns. The CDT doesn’t do things halfway: if there are going to be trees blocking the trail, there should be hundreds! Josh broke a trekking pole and lost one of his camp shoes. It was brutal. I felt I had cut my teeth as a hiker in Glacier, pushing my way across steep snow and over passes, getting back into shape after taking days off. In the Bob I thought I would sharpen my teeth, but the Bob said “here have some blowdowns to chew on.” 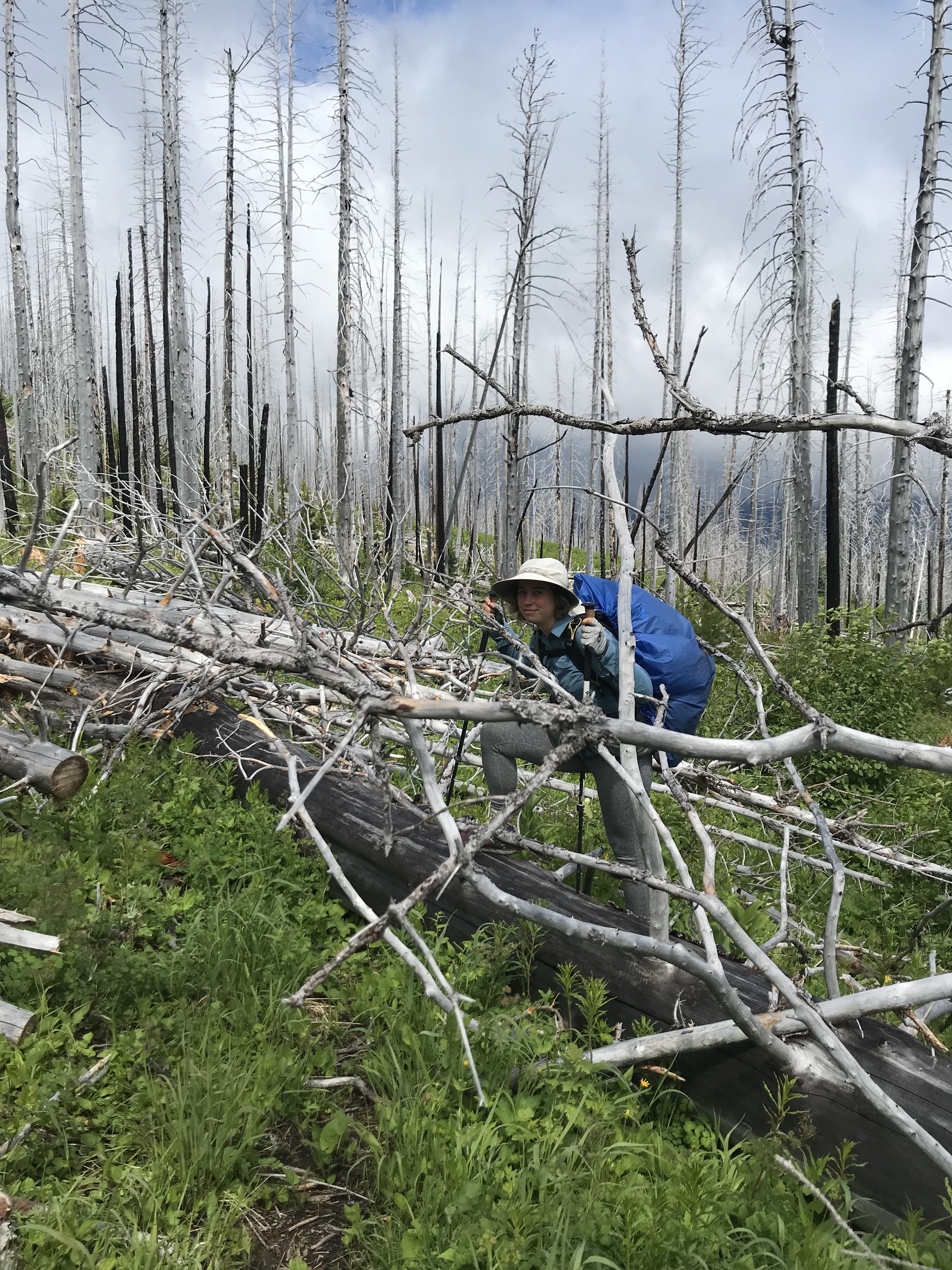 Photo by Giggles, a.k.a. Danielle O’Farrell.

At last, open trail! The four of us—Giggles, Stoke, Josh, and me—took a Ley shortcut on an old dirt road, then had dinner back on the trail before continuing on into the evening. It started raining at dusk and I waited too long to put on my rain skirt, rapidly soaking my leggings in the wet brush. The worst thing about rain when backpacking, though, is putting on wet things in the morning. Especially wet socks. It’s very cold.

There was a creek crossing first thing, and I went straight through because my feet were already wet. Josh was up ahead and Giggles stopped for a few minutes, so the three of us got separated early in the morning. Then I had to stop, and when I hiked on I thought I would find them waiting soon enough. I sang to the bears. After passing a couple of lakes and entering a burn section I started to wonder when I would find either Giggles or Josh. Finally I did find Josh, sitting on a log. Giggles had passed him some time ago. I had been lonely all morning and now I was in a bad mood, annoyed by everything. I felt slow and that didn’t make me want to speed up for anyone or anything. 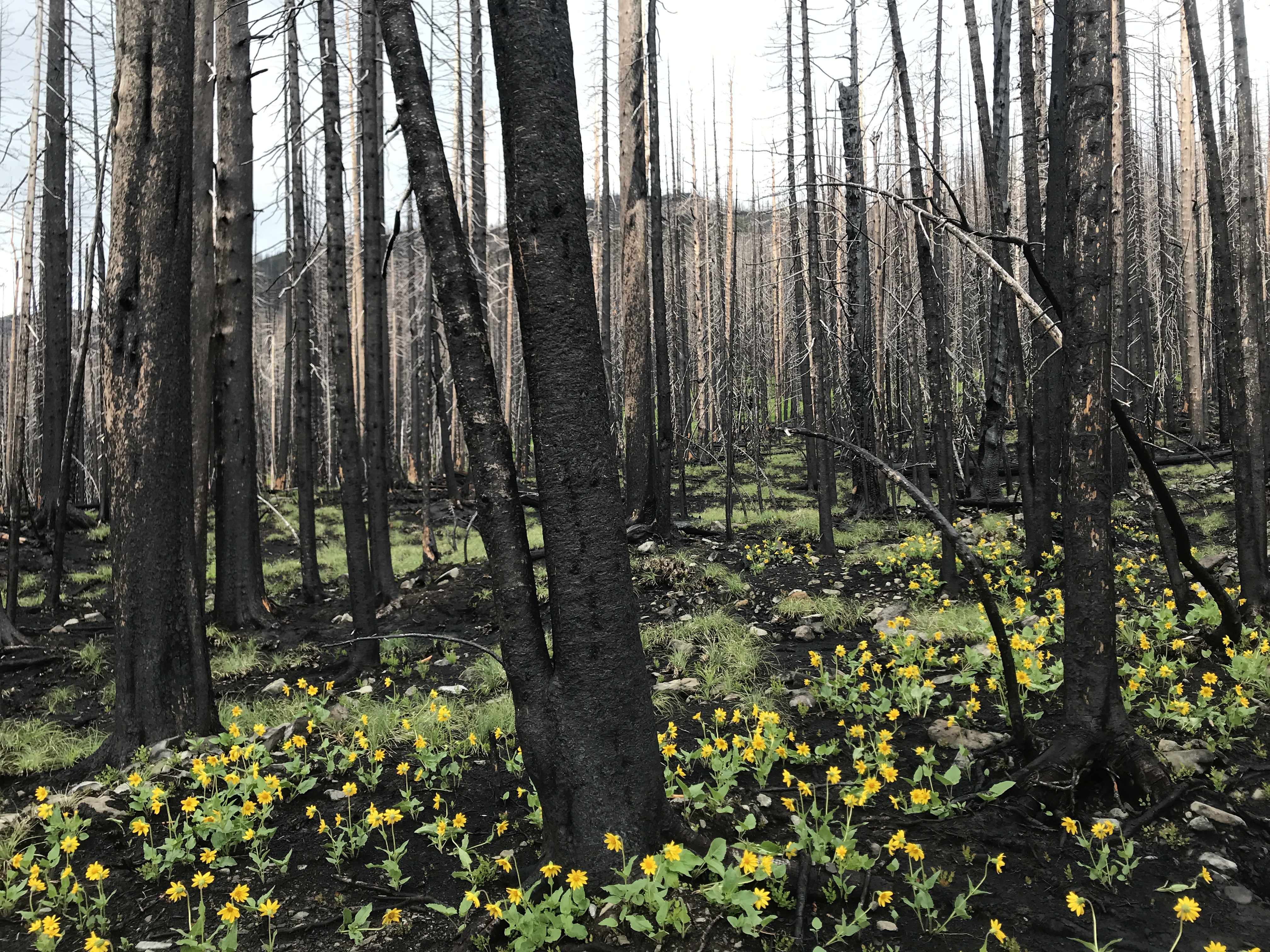 Josh and I hiked together the rest of the morning and afternoon. We got a text from Giggles on the Inreach saying she would wait at the junction for the Spotted Bear Alternate, which we had talked about taking. When we arrived she wasn’t there, but we took a break anyway, tired and hungry. Hammer and Corky came off the alternate hiking north. We hadn’t seen them since the Basin! They told us Giggles was at the ranger cabin a mile or so farther. The trail had wound through burn areas for most of the day, some more recent with the ground still ashy.

Now we entered an older burn with abundant wildflowers: lupine, paintbrush, and the first mariposa lilies I had seen on trail.

Giggles, Josh, and I ended up staying at the cabin along with Stoke and a few other hikers. A veritable crowd!

The morning was cold and cloudy and started with a creek crossing. The kind where my feet hurt after and I hopped in place before walking on. The trail went up and then up more and more to Switchback Pass. We saw another hiker, Mud, almost at the top as we began our final ascent straight up the snow. I had I Will Survive stuck in my head and I fantasized about trail magic that was just karaoke in the middle of nowhere. At the top the wind blew and it was foggy and  freezing but we attempted to take a break. I aired my feet out, shielding them with my socks laid on top. 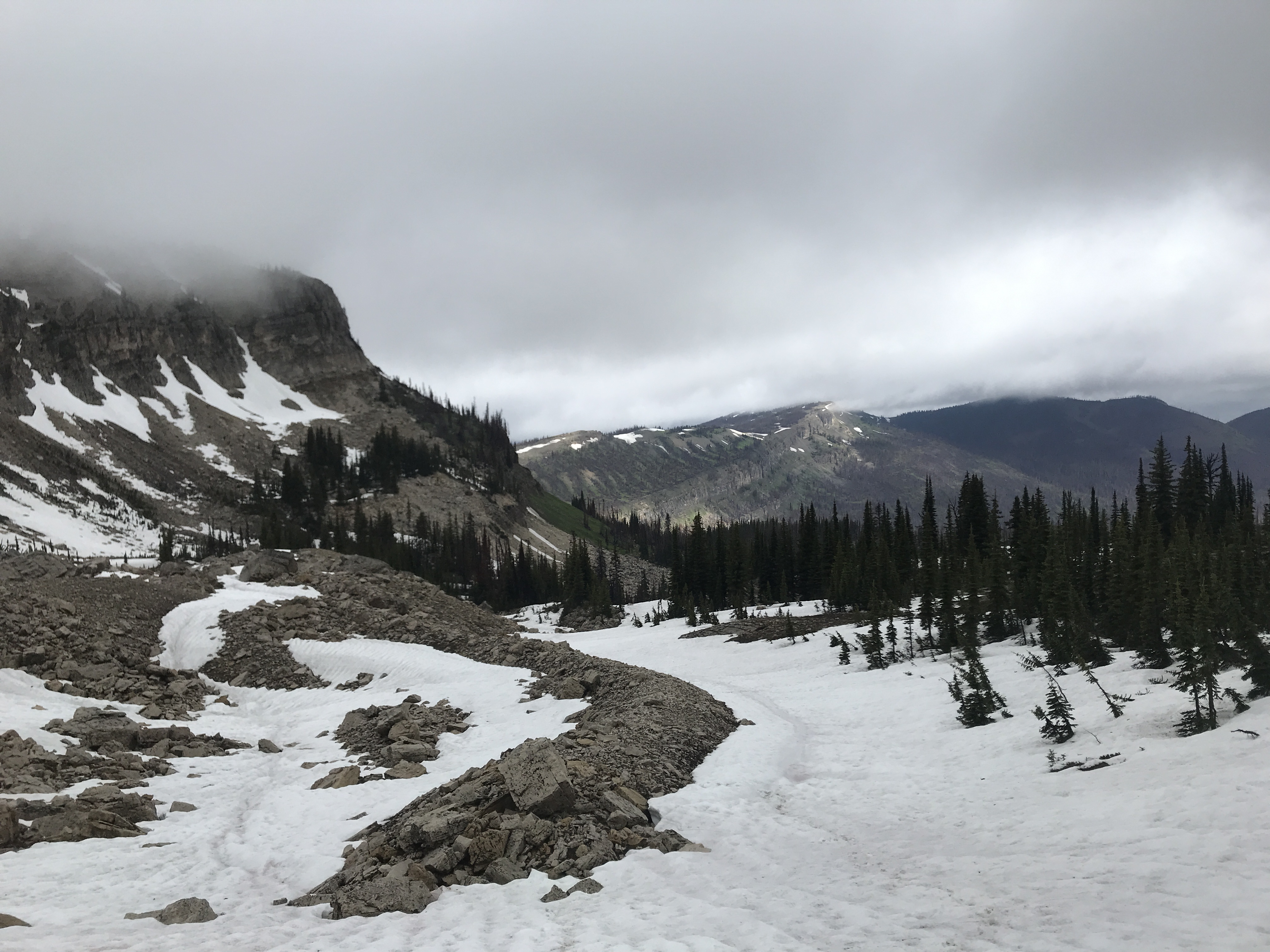 The way down featured many switchbacks, as promised. It seemed like the sun might poke out and Giggles yelled and begged it to please shine on us for a little bit. And it did! We dried out our wet gear. The trail went through green plants and forest again and the sun got stronger.

The trail went up and over a second pass in the afternoon, then up some more to a small lake nestled near the ridge. Giggles, Josh, and I set up camp there as the sun set. A deer was sneaking around our tents during dinner, and we worried that it might try to chew on some of our saltier, sweatier gear. Giggles chased it off. For those of you who may never have experienced this: some deer in the backcountry are desperate for salt.

They will munch your cork trekking pole handles  and lick the dirt you have peed in.

It was fantastic! Definitely a highlight of the Bob. 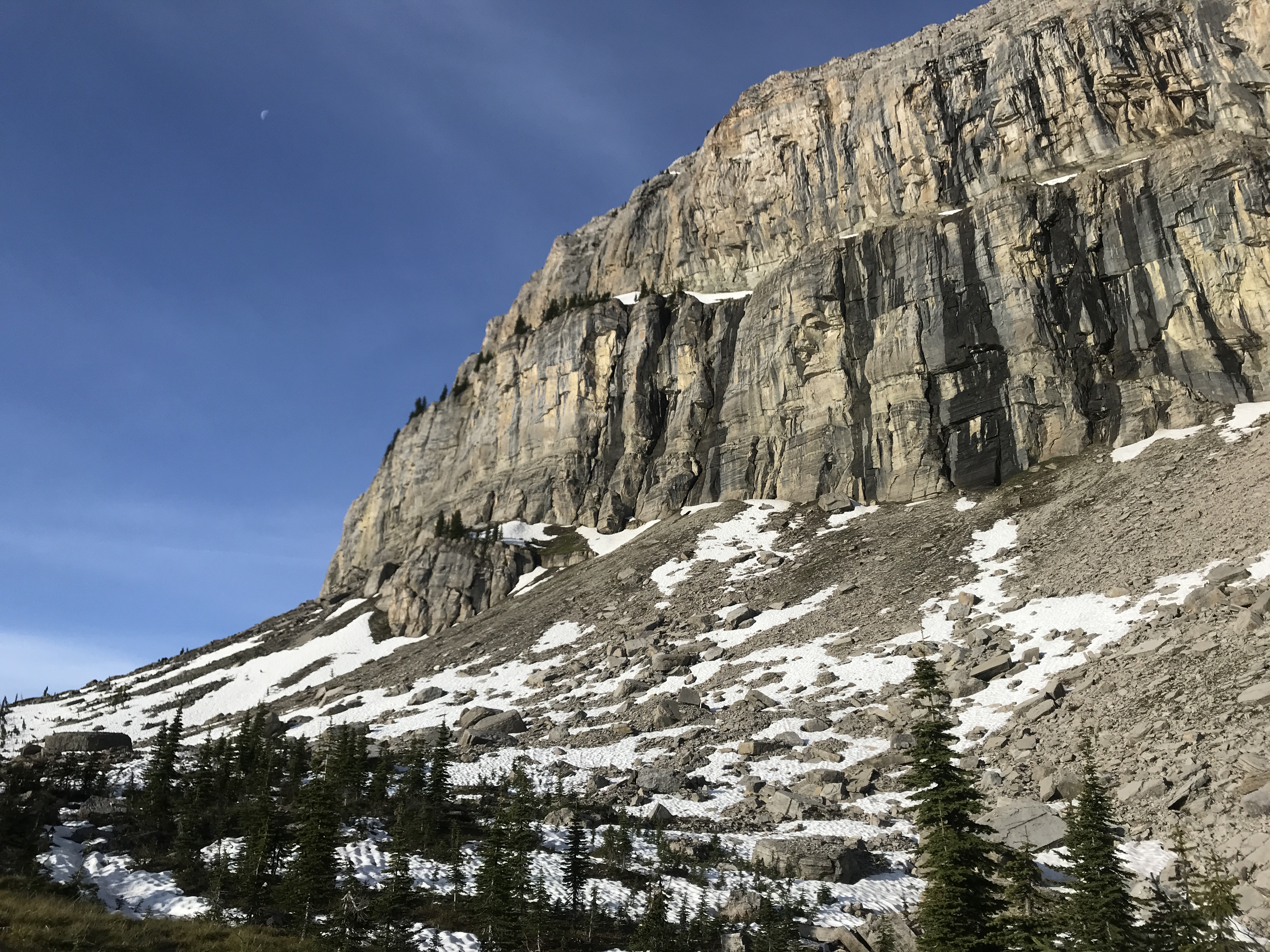 We stopped for a break at the end of the wall, also the high point of the day, elevation-wise. A very curious chipmunk wanted to join us for snack time. It would not be deterred. Josh threw pebbles in its general direction, Giggles shook her shiny silver emergency blanket, and I snapped my umbrella open and shut, but it didn’t care. Perhaps it got a few crumbs when we left.

Speaking of animals, there was bear sign all over the Bob: tons of scat, and prints everywhere, in all sizes.

Not a bear to be seen, though. I’ve heard a few people comment that outside of national parks, where bears are hunted, they are much more cautious and fearful of people. Fine with me.

The plan was to hitch into Augusta from the Benchmark trailhead that afternoon. With town in the near future we tend to take less breaks, and today was no exception. The three of us took one more break together, sitting in the shade right by the trail and eating while our feet aired out. Soon after lunch I had to pee and ended up behind, but I didn’t mind because it meant I could take all the pictures of flowers I wanted without holding anyone else up. 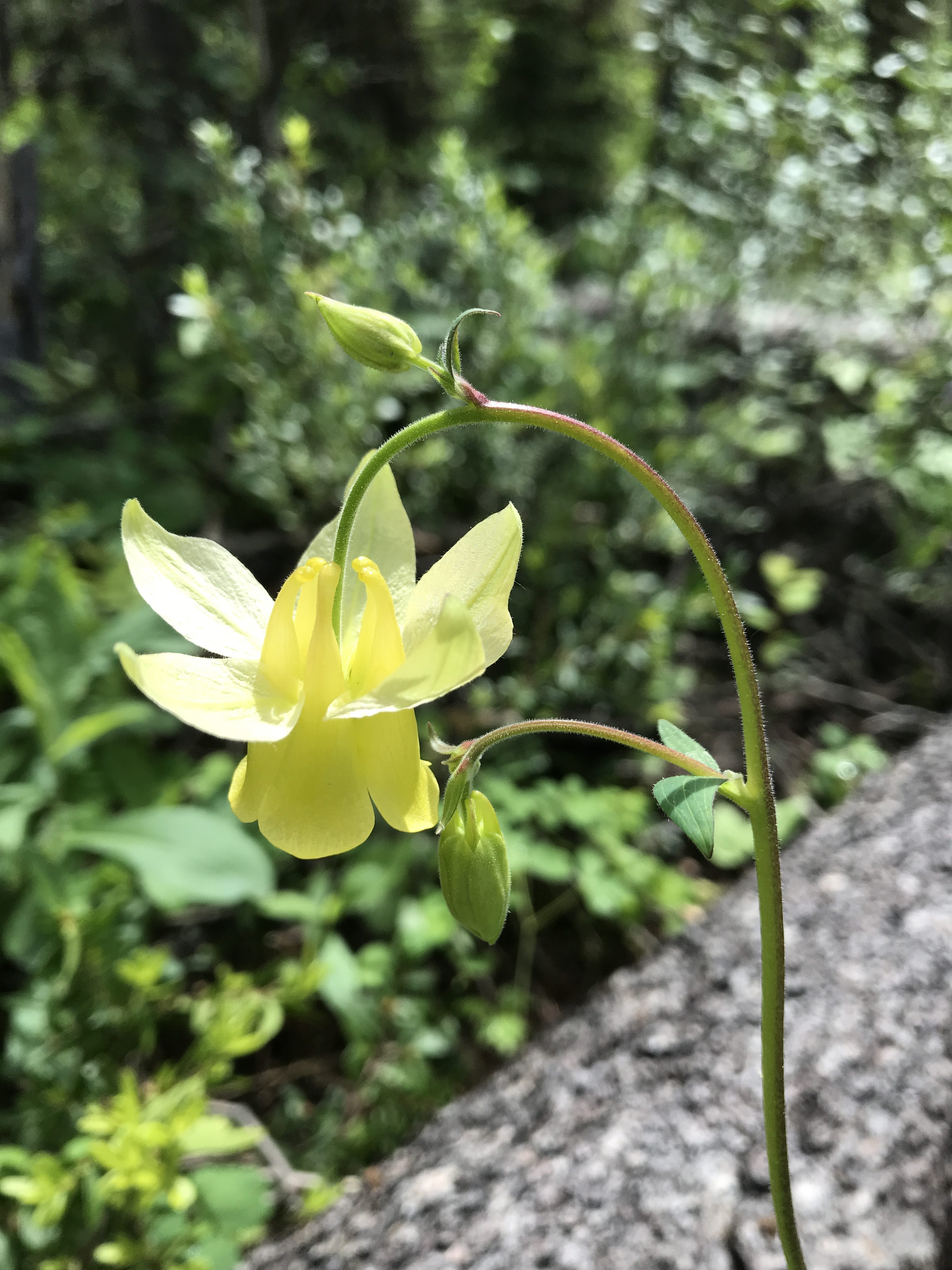 The trail went through rolling meadows dotted with stands of healthy pines. A welcome change from all the burn areas. I caught up with Josh and then we caught Giggles right before the trailhead.

There were about ten cars, but the only people were just heading out on a fishing trip. We ended up waiting around for two hours and lining up a ride from a guy who owned a motel in Augusta. He and his wife came and got us. We paid him for the ride and we stayed in his motel. Pricey, but he gave us some beers from his bar for free.

The three of us went to the Buckhorn Bar for dinner, where I ate an excellent and very large burger for dinner. Somebody won a bunch of money at a slot machine, and gave everyone in the bar two free drink tokens! I had a margarita and then I asked for a Dark and Stormy, in honor of all the weather we’d had on trail, but the guy didn’t know how to make it.

He made a mediocre attempt, light on the rum, probably because I told him he should google it.

The next day we got a ride back to the trail from a guy at Lazy B’s Pizzeria, where we had lunch. The folks there were very hiker friendly—they even brought us plastic bags to pack up our leftover pizza as trail dinner! All in all, Augusta was a sweet town, but expensive because we had to pay for rides in and out. I did get to hear two guys sing along to the Goodbye Earl and that made everything worth it. Josh and I decided to bring extra food and skip the next town to save some money and time. Our packs would be heavier, but we had pizza!