New Mexico is done. The plan is set. I’m flipping up to Wyoming to let at least some of the snow melt for a week and change. The way opened pretty well for this choice. Here’s the walk up to it.

Walking out of Ghost Ranch I was greeted by an amazing canyon walk and climb. It was reinvigorating in so many different ways. It felt really great to be in my body, to be hiking and moving. The bodily place of “one step forward” is a place that I’ve become so comfortable in. So powerful in. And it felt good to embody that power. I got to an overlook that looked over the climb I just made and had a moment of euphoria as the wind buffeted my being as I witnessed the majesty of the landscape. 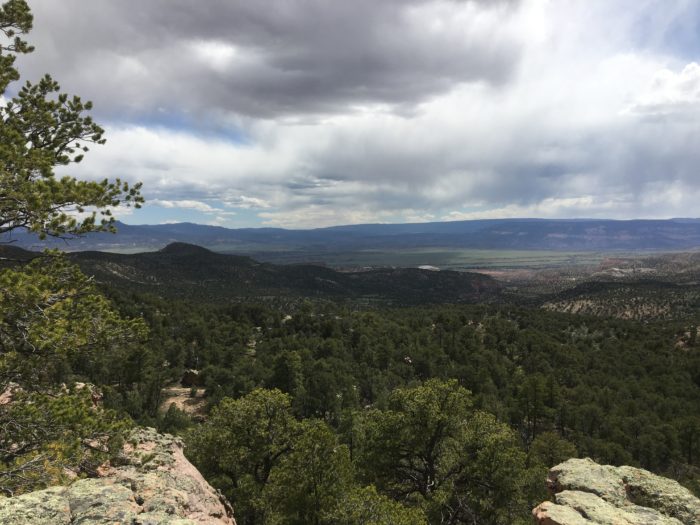 Kept moving through a Mmesa with cow trails that I got a little lost on. Found myself on a ridge where I went primal. Climbing trees and experiencing how much of a primate I am. A primate that can walk, run, and sweat. How powerful that is in a physical environment. Went to bed late feeling full of energy.

Woke up early and got moving in the cold. Pushed to water to refill and have a meal. Watched some TV as I had some service and then pushed on. Got back to the official CDT route, as Ghost Ranch was on an alternate. Hiked the official route until I could take some roads that would cut off a few miles. The thing with the CDT is there really isn’t an official route. Sometimes there is a footpath or forest road or highway that the trail follows but other times the footpath disappears or splits in two. It really is a choose your own adventure trail so when the trail goes a route that I can cut off with another route, I will take the shorter route.

The route I chose, though, was slow going as the roads weren’t necessarily there and there was a lot of snow and moisture in the ground. Got back to the CDT and found a nice spot to camp after a pretty grueling day. I have 13 miles till a highway with potential weather coming in so I’m considering getting off there for a spell. We’ll see tomorrow.

Woke up extremely tired. Body was feeling a lot of fatigue. I’m also feeling a bit depressed so physically and psychology sluggish. Managed to get moving around 8:30 and it wasn’t as cold as I thought. Got to a vigorous river with a log crossing and had a drink.

Was moving slow and sluggish. I had snowshoes on my pack, which were really heavy. My pack also wasn’t carrying the weight very well so my back was getting sore. Caught Link and Carmen at the highway and decided to head into Chama as it turned into an easy hitch. Got a room, talked to some other hikers, got some stuff for spaghetti, and made dinner. Went to bed full, clean, and happy.

Woke up after sleeping in a bit. Decided to take a zero to look at options going north. Really unsure of how to continue. Flipping to the Great Basin of Wyoming seems more and more likely. I discussed plans with other hikers but I realized I couldn’t focus until I finished the section I got off of. Forty miles until the border of New Mexico, I couldn’t leave to go north before it was done. I couldn’t really focus on anything before it was done. The rest of the day was a fog of conversation as I just sat consumed by the miles I had to do. Went to bed excited to get back at it.

Woke up and gave the world a bit of time to wake up. Made some b-fast, packed up, and starting hitchhiking. It is always more difficult to get a hitch going up a mountain than going down so I was pretty anxious about getting a ride. So very luckily a trail angel, Chesire Cat, had stayed at the motel and gave me a ride straight up to the trailhead, which was amazing.

Started hiking and immediately felt better. Ride that high for five miles before taking a break. Figured out that Microspikes are super helpful for hiking in snow. I usually only used them for gripping when I was in truly alpine areas, but they were so useful. My feet gripped the snow so I can take actual steps instead of slipping and sliding. Instead of energy for every step going to stabilizing, all of my energy could go toward the stride. Pushed to a river crossing where I met some other hikers. 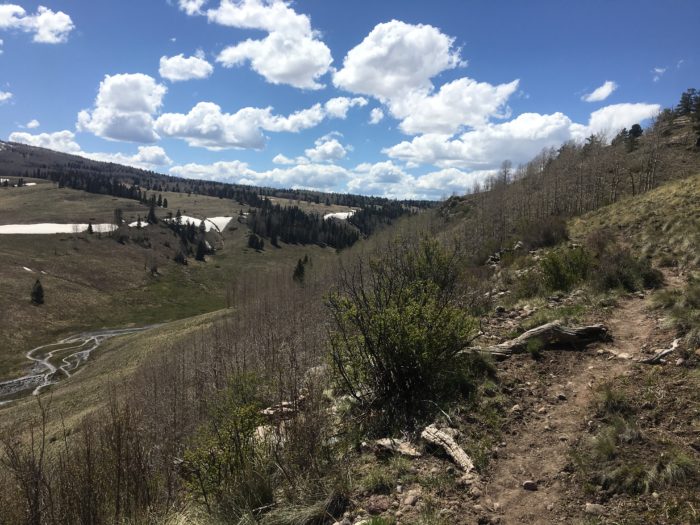 The afternoon was incredible. Walked along a valley ridge with amazing views. Tried out the snowshoes when I started sinking into the snow with every step instead of every few steps. They worked pretty well as the afternoon/evening was mostly traversing snow. It was still quite tiring even though I wasn’t postholing every step. Made it to a beautiful summit with a 360 view. Had an epic sunset that turned the landscape purple and blue. Went to sleep with the universe staring down at me.

Woke up and got out at sunrise. The intention was to hike with Microspikes on top of the snow as it was still frozen and I could crunch along the top. It heated up a bit earlier than I had thought and I switched to snowshoes midmorning. I was sloshing through the snow still so it was hard going but beautiful.

Pushed through a tough uphill that seemed to last forever. Swapped back to Microspikes for steep slopes to the border. Made it to the border a bit before noon, which felt amazing. New Mexico was done. Slammed the last three miles to Cumbres Pass where a trail angel, Mavrik, had just dropped some other hikers off. So I got an immediate ride back down to Chama. 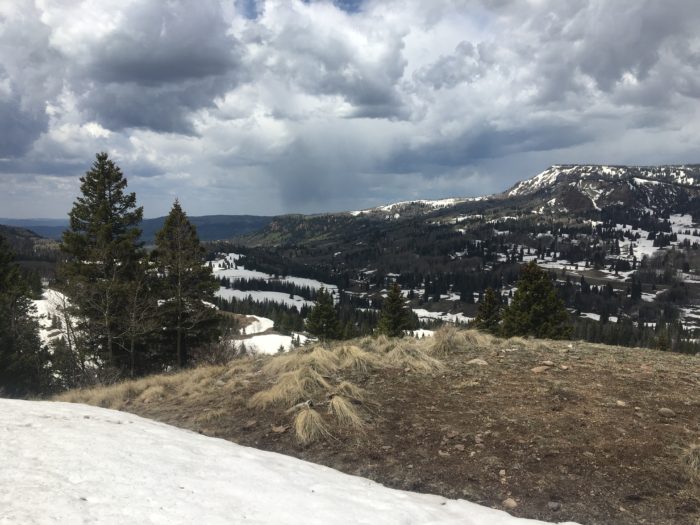 Picked up my ice axe that I got sent to the post office, which had closed half an hour earlier but someone was still there and willing to get me my package. Got back to the Y and caught the haphazard tramily I have gravitated toward. They had rented a car and were heading to Wyoming to hike the Basin where there was snowless trail. Something about the ease of getting into Chama, managing to get my ice axe, the fact that the ride was all set up, and the intensity of the snow. It felt like the universe had laid this way open for me and I decided to take it.

I didn’t have that much time to decide but I think that helped me. If I had more time I think I would have languished over the decision and caused myself a good bit of grief. But I think it’ll be the right decision in the end. Made it to Denver after a nice car ride. Sleeping at a friend’s place who knew Caroline and her partner, Riley, who had joined us in Chama. Went to sleep feeling a little surface unease but a deeper sense of peace and openness.

Woke up, cleaned, packed up, and went to get some coffee and breakfast. Then we went to REI and had a blast. I really love REI, just browsing through everything. Managed to get us away from there and onto the next activity planned, which was a movie. Rocketman, the biopic of Elton John. It was an incredible movie, even though I didn’t know much of his history. 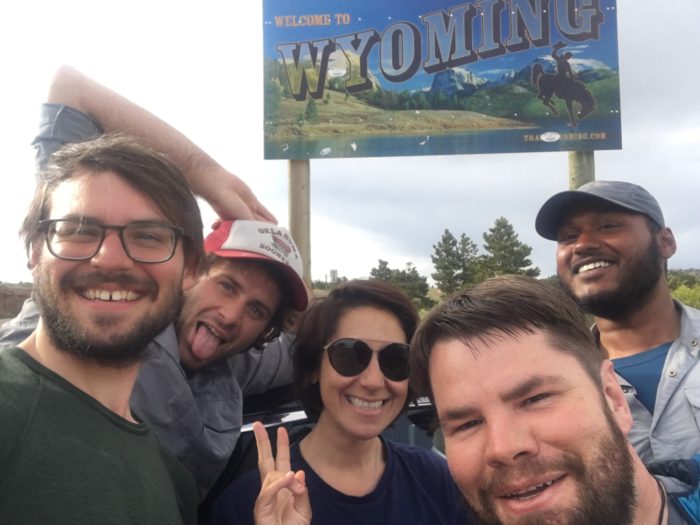 Afterward we hopped in the car and made the drive to Wyoming. Stopped at the border sign to take a group photo. Made it to Laramie, where we had some Thai food then headed to a friend of Carmen’s who put us up for the night. Talked about and hammered out our plan. They had two dogs and a cat that all snuggled up with me as we all went to sleep.

The night was a stressful one for me. I had some serious abdominal pain that kept me up most of the night. I went to the urgent care in town to get checked out as soon as it opened. Turned out to not be Giardia, which was my fear. But most likely a perfect storm of vulnerable intestines and sketchy food. Got a prescription for a numbing agent that should help as I push through the Basin. Plan is to get out today, hike north and reevaluate at the north edge of the basin. So much of the past few weeks has been stopping and reevaluating logistics. I’m really looking forward to a week and change of uninterrupted hiking.