As I sit in a cafe in Silver City, NM, I reflect on the past five days. Landing on trail was always going to be chaotic. But this was the first moment of stillness when I could start to reflect. I don’t know if I’ll stick to the daily format, especially in more remote areas. But here’s my first bit of time on trail.

Getting to the Southern Terminus was a bit hectic. I made a really tight travel schedule for Saturday, April 20. I had myself flying into Tucson, AZ, and then catching a bus to Lordsburg, NM, to catch a shuttle that would take me to the terminus in the morning. Nature saw that plan and decided to throw some chaos in the mix.

Massive storms had canceled my first flight and even through rebooking, the flight into Tucson was delayed. I sat in my plane as we were landing, powerlessly watching the time tick by the scheduled departure time for the bus. I wandered through the streets of Tucson when I remembered a very old family friend. She heard the situation and jumped at the opportunity to help. Michelle was my first trail angel as she drove me over to Lordsburg.

In Lordsburg, I got picked up by Dion from Crazy Cook Shuttle. Along with three other hikers—G-wiz, Zeke, and Gillian—we drove out to Hachita, NM. It was closer to the border so we would get there really early. Stayed in the community center and went to sleep amid goodbyes and anticipation.

Woke up early. Got everything ready and we loaded up in the shuttle. The energy was a little subdued as we made the journey, even though it was surging and bouncing around within me. Got to the terminus early, took a few photos, and set off. The first 14 miles to the first water cache went by like a blur. It was easy hiking, and I was riding the wave of anticipatory energy that I had been building ever since I decided to hike this trail.

The first thing that struck me was how quiet it was. I had been living at home in Virginia for the past month, and there are birds singing and cows mooing there. I had also spent a few days in DC before leaving, and both of those places had this baseline of sound. When I got a bit away from the other hikers, the difference really struck me. There were wind and a few birds, but beneath it was a silence that is really unique to remote desert. There just really isn’t anything out there to make any noise, so there just isn’t.

Made it to a windmill that had some water, and trees! It was a bit farther than I had made it last year, so that felt good. A bit burnt, sore, bruised, and dehydrated, I lay down for rest.

Woke with the sun and was up and out. It was an overcast morning, so very nice hiking. Got to the second water cache and cameled up for the carry to the next cache, about 20 miles. The sun came out in the first half. But I found a shady tree for a little respite. The second half was accentuated by a rainstorm. It did not rain last year, so it was a cool experience. I saw it come toward me, pass over, and move past me. I could really see and appreciate how big the storm and the landscape was. 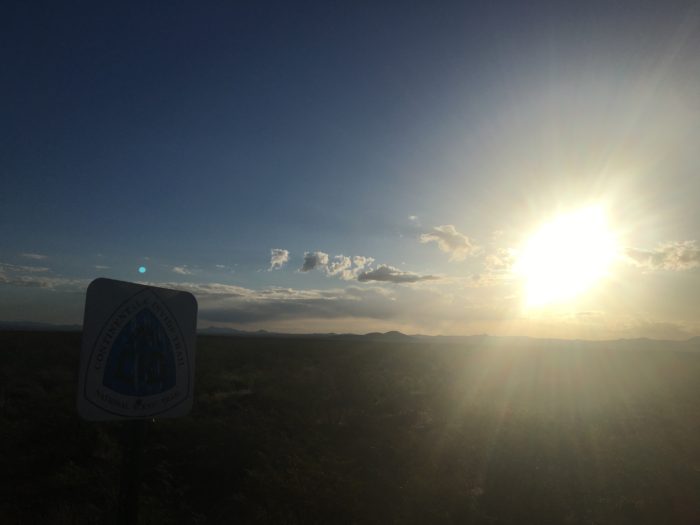 Eventually I made it to the third water cache and cooked some dinner. Pushed on a little less than a mile but the wind was picking up and it looked like a storm was coming in. So I set up my shelter and hunkered down for the evening. The wind was pretty intense, as was the rain that came with it. The tent held up well, after I made some adjustments with the stakes. After the storm passed, I closed my eyes and drifted off.

The sun as my waking companion, I was up and out early again. Was in a string of mountains until the fourth water cache. Which I reached a bit after noon. There was some trail magic big after the cache. A man named Apples had a shade tarp set up and had some soda and snacks. He was there last year and vaguely remembered me. Took a Coke for the road and headed on. 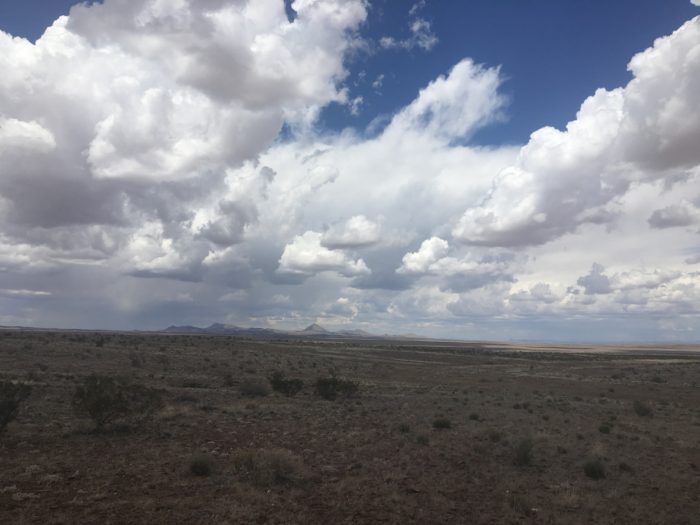 I had a 15-mile stretch of exposed hiking ahead of me. It was a bit intimidating because I could see the entire stretch, every bit of 15 miles. I threw some time at it, though, and got to the end. Ate dinner at a water pump and then camped a little bit farther.

Got up earlier than I had the previous days. I had about 14 miles into Lordsburg so I wanted to get going. Got to the last water cache and pushed on into the city. Ate a nice meal at a restaurant in town. Resupplied at the Family Dollar, and headed out. I was really reminded of last year as I had spent more time in Lordsburg than I did this year. Walked through a few memories.

Met another hiker coming out of Lordsburg named Ben. It is his first thru-hike, which is a bold one to start on. I had also been keeping pace with G-wiz throughout this time. We all stopped at a shady tree a bit outside of the city for a break. Then we all pushed on at our own paces. Threw down my things some miles out and took in the first clear sky of the trip. The stars were unbelievable; nothing in between my physical body and these lights. I fell asleep blanketed by infinity.

I woke up and had a bit of a morning. Did some yoga and pushed on. Reached a windmill and was realizing I wasn’t going to be able to reach my target of getting into Silver City by Friday. I had planned it in my head that I would take an alternate along a highway which would get me there in time. That was the route I took last year.

The indecision of not knowing what my priorities are combined with the fear of never being able to overcome all my insecurities. I reached the trailhead where the road walk began. And I fell asleep with tears and a sense of loss and aloneness that I knew had been there but had been overpowered by my excitement to be where I was.

I woke up still consumed by fear so I did some practices I know to try to help get out of that place. I decided to hitch into town from the trailhead to have the experience of Trail Days. My plan is then to hitch back to the trailhead and continue on trail from there.

I’m reminded of why I came out here this year. I came to encounter that fear, to be in that deepest darkest place. To confront all of those insecurities. In my excitement I think I put myself in a place to confront all of it at once. And I’m reminded that that work is the hardest, scariest work that I can do. And it is OK to spread it out over the trail. To make it easier to take on one step at a time. Because I can do one step at a time.