The I’ve been hiking trail that is all new to me the past few days. Even though the mosquitoes are bad I feel like I’m no longer hiking through anything, I’m hiking toward something. And now I’m free to inhabit that hike in new and different ways. Just a few days left of Colorado. With the Basin hike, I’m more than halfway through. It’s hard to imagine that there is an end to this hike and I’m getting closer to it. Still got a lot of miles to go though, so here’s some of the process.

So I left Grand Lake after eating a massive brunch. Was on roads for a few hours trying to get back to trail. Slow moving down a Jeep track that was overgrown and messed up by blowdowns. Got back to trail and took a break before heading on. Coming up over a rise I saw a massive bull moose sitting in the middle of the trail. I didn’t believe it was real for a second before my eyes confirmed that indeed there was a giant moose in the middle of the trail. I gave it a wide berth all the while thinking why couldn’t Blue just walk around the Snorlax. Set up before Bowen Pass and fell asleep early. 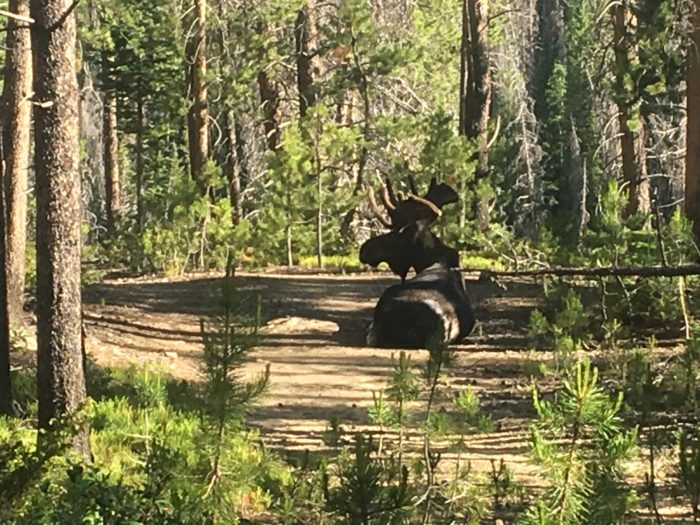 I got up and out early. Pushed up the pass where there was a small snow traverse at the top. It wasn’t that bad but descending was a few miles of snow and blowdown. So very slow going for a while. I made it to a highway where I took a break and ate a meal. The mosquitoes were bad and I lost my bug spray climbing over a fallen tree. So I didn’t stay put for long. 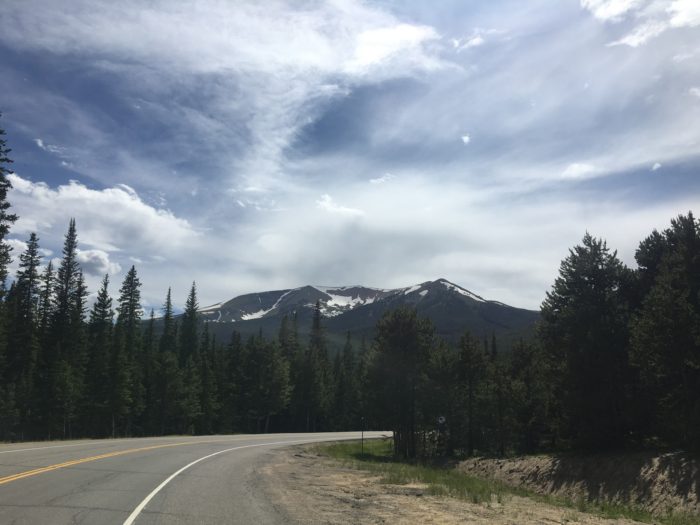 From the highway my next climb was visible. A steep and long climb up Parkview Mountain took time but made it up there. The trail cut up a cornice so I pushed straight up the bowl, which wasn’t too steep. I saw some other footprints so I felt a bit less crazy. Ridgewalked to the summit and used service to catch up with the world. A nice ridgewalk down until the descent got steeper. Pushed a bit past sundown before I found a nice spot with compacted ground and set up. I fell asleep grateful for the mesh of my tent.

Got up and out early. I pushed on after getting water from a creek. I passed some other thru-hikers who were still in their tents so I didn’t confirm who they were. Made a climb up the divide and then ridgewalked for a while. Following the Divide was lots of very steep ups and downs with patches of snow I had to climb over or walk around.

Made it to a ridgeline and tried to see if I could stay on the Divide. I decided it would be too much work so I stayed on the official route, even though it dropped and rose 1,000 feet over the next four miles. I leapfrogged with Pincushion down and up to the pass. The up was snow and blowdown, so slow and tiring going. Chatted with Pincushion for a bit at the top before heading on.

The crew I had been with had a room in Steamboat Springs for the night and I managed a ride from a trail angel, Kevin, from a highway I would be at later. I had a lot of miles still to hike but it was mostly downhill. Fortune was with me as some college kids came up with ATVs and a UTV. They offered me a ride down and I accepted. I knew I could hike down this road but thought that my experience could be enhanced by talking to these guys while riding in a UTV.

The kids were nice and sweet, and the ride was exhilarating. It wouldn’t be fast for a vehicle but it was faster than I could ever go. We clambered over rocks and divots in the road. I was pretty impressed by what it could drive over. They drove me seven miles and then I pushed to the highway. Absolutely swarmed by mosquitoes. I put pants on, rolled down my sleeves, and just took laps waiting for Kevin to arrive. I could hear the swarm around my feet.

Kevin was a cool guy. He got the lifestyle, and wanted to pay it forward before he started the Colorado Trail in August. Got to Steamboat and met up with the crew. Caught up, showered, and then had a wonderful spaghetti supper with cookies and ice cream for desert. We retired for the evening but I couldn’t stop feeling or hearing phantom mosquitoes. I managed sleep at some point.

Woke up and discussed logistics while HD made some eggs and toast. Then the majority of the day was spent running around town resupplying and doing different errands. Got back and went to see the newest Spider-Man. Which was really good. Got back and made a pizza and watched TV and relaxed for the rest of the evening. Showered and then went to bed.