Done with the Wind River Range. This has been the most beautiful section I’ve ever hiked. The views are truly incredible. I’m sad that it’s over but know there’s still so much more to come.

Our ride dropped us off in South Pass City after resupplying in Rawlins. There was a bubble of hikers there who stayed on through Colorado. I recognized maybe one person. Got some new shoes, which are pretty swanky. Tossed the old ones with gratitude and reverence. They had been good warriors for 1,100 miles. And now it was time for them to rest.

Packed up food, charged, and downloaded things. Tried integrating the groups, talked for a while. But our group left after a bit. I outpaced everyone and they all took a road I didn’t so I missed them. I was a bit bummed as I did want to hang out but I’ve become quite good at just hanging out with just myself. So I had a nice evening eating food and watching TV.

I did cowboy camp, as there were no mosquitoes out. The mesh of a tent will disrupt the stars, so cowboying means that uninterrupted view. Which was spectacular this evening. I was gazing into the face of the universe, and it was gazing back. I was a consciousness floating through infinity that designates itself as a person named Bryan in a crop of rocks near mile marker 1,759 on the CDT in Wyoming on this planetary body called Earth orbiting a star I call the Sun. I found sleep among this infinity.

Woke up and went down to water. A guy from the other group passed me. I pushed on till I ran into Sweets and HD. Chatted a bit and then pressed on. Reached the top of a climb and realized I could go a lot farther than I planned. But I had to be at Yellowstone by a certain date per the permit system. Frustrating to know I could be going more but it’s pointless to do so. I climbed to an overlook and took some time to meditate on it.

Sweets and HD passed, as well as the other group. I came back down and headed on. Gorgeous forest hiking. I leapfrogged with everybody to a campground. I took a break and wrote a bit. Pushed on and caught HD and Sweets and chatted a bit before pushing on. Found a spot and cooked some dinner and went to bed.

Woke up and packed up. Everyone had passed me earlier but I caught them. The other group was doing an alternate, the Cirque of the Towers, which I decided not to do. So I pushed on past the alternate. I took a wrong turn as the official CDT was less traveled. It was a very faint trail but I got better at reading directions of travel. It was fun but not to a frustrating degree, usually.

Legion, another hiker, caught me a few times on some breaks. I pushed on until the mosquitoes got way too bad. I decided to throw my tent up for the evening and continue through the valley in the morning. I’ll climb out of it before the morning is over.

Woke up and got out a bit earlier. Mosquitoes were still there, maybe a bit more sluggish. Hiked beautiful miles out of the valley with wonderful views. Beautiful wildflower meadows with boulders interspersed with pine forests and blue lakes all overlooked by massive towers of rock. It was truly picturesque. 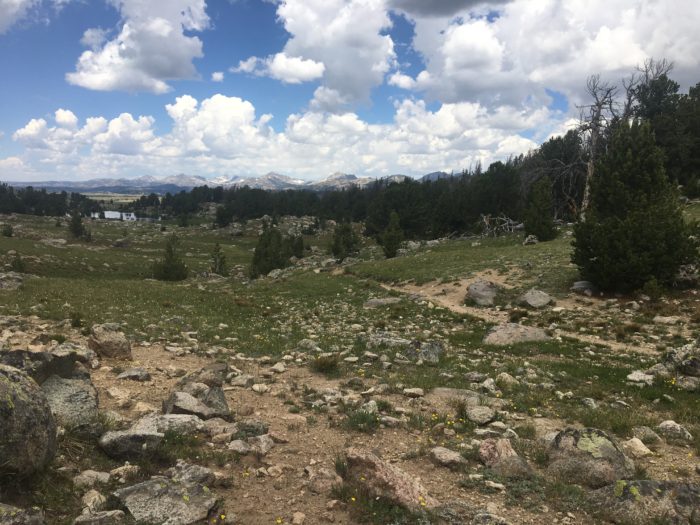 Passed some section and day hikers. As remote as I was, this was a well-traveled section. I took a break at a nice lake and checked my sleeping pad. I found two small holes that I patched and ate some food. My food situation wasn’t that great, especially with three more full days of hiking to go.

Caught Sweets and HD, chatted for a bit before they stopped to get water. I reached a spot with service and checked in with the world. I was really missing people and familiar energies that I knew for more than a few moments or days or weeks. But it’s OK-. I chose this life, I chose to be three months into a crazy adventure. I chose to be swarmed by mosquitoes, to be dirty, tired, sore, hungry, thirsty. I chose it all because I know I’m doing important, powerful work here. And that’s what matters in the end.

Woke up and got out earlier. I ran into another hiker, Akuna, who was going into Pinedale. Pushed along till the turn-off to Pinedale and pressed on. I thought about going in but decided against it. It would only be for food and I’m strong enough to get through this with what I have left.

The morning was three passes right after another. Into a gorgeous bowl. Lakes, boulders, pines, surrounded by massive jagged mountains. It was some of the most stunning hiking I’ve ever done. Every pass I climbed gave me a new bowl to gaze into. My contact ripped so I took it out, went with just one contact for the rest of the climb I was on. Got to the top and took the other contact out and switched to my glasses. Guess we’ll be going old school for a bit. 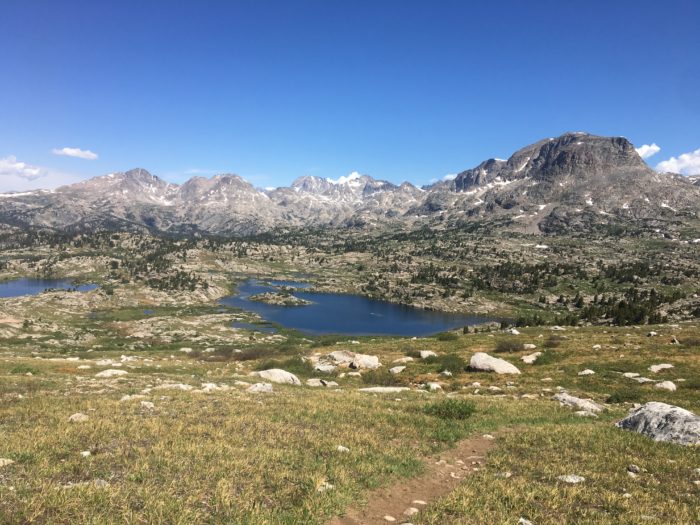 Found HD and Sweets. We discussed Knapsack Col, another alternate, but independently decided not to do it. Energy was already hard to come by. I do not have the calories with me to make the climb. I feel like I’m on a caloric clock. Pushed along a nice lake, just spectacular terrain. I called it a day as my body was tired from the amount of climbing today. There’s less climbing tomorrow so hopefully will be able to get miles done. Fell asleep realizing how surreal this experience is.

Woke up and got out a bit late. It was chilly and drizzling for the morning, which kept it cool and mosquito-free. Which made for really lovely hiking. I have been sort of dreading hiking because of the mosquitoes. I couldn’t really stop and enjoy anything and now I really could. And it was amazing. It truly is some of the most beautiful hiking I’ve ever done. 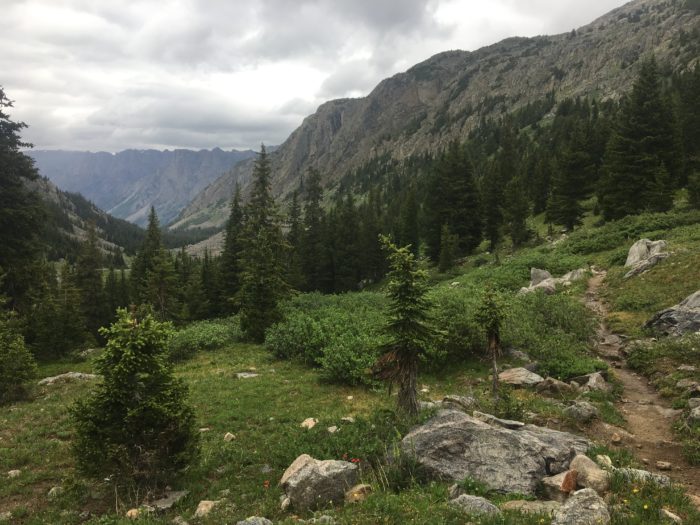 Had a big descent where I could see massive rock walls along the valley. Passed another hiker, Sea Legs. Chatted for a spell and then leapfrogged for a bit. Caught HD and Sweets at a bridge. We decided to push into Dubious a day early as we were all running low on food. Waterfalls turned into the Green River, which I was surprised to find was actually green.

Pushed along the river past some idyllic campsites. Walked along Squaretop Mountain and then followed the river till I could get a full view, and wow. I’ve seen pictures, but they never do it justice. Took a break overlooking a lake, then pressed to a trailhead that had pit toilets and trash cans. After unloading my waste, I found HD and we hiked back to the trail. Didn’t want to go farther so we set up nearby. Had a pretty spectacular view as I found sleep. 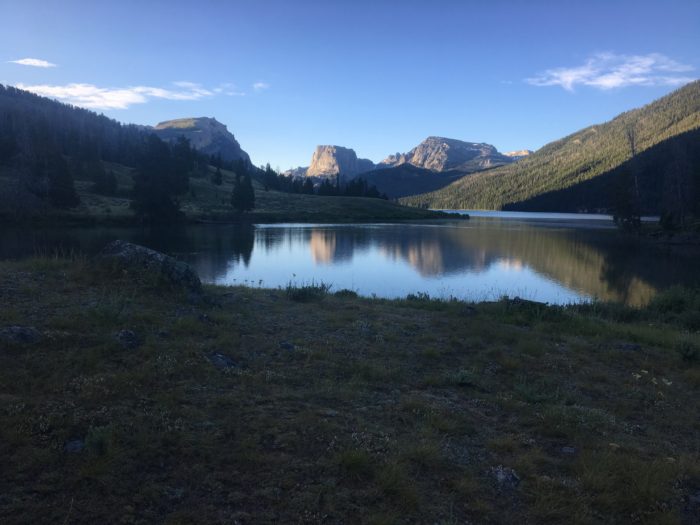 Woke up to cold and condensation on most of my things. Packed up and got out early though, which was nice. Passed Sweets and HD and pushed up a climb to a pass. I could actually see the Tetons from a hill to the west, then busted down the pass. I was out of the Winds so it wasn’t as spectacular, but it was nice enough.

Pretty big meadows and forests. It was cow land as well. Had a nice spot for lunch where I laid stuff out to dry. Had a meal and did some yoga as I packed up. Felt invigorated and energized from that. Sweets and HD caught me and we discussed plans. Excited to go to town but bittersweet as this was my favorite section and it’s nearly over. And by extension the hike as well. Though I still have many miles to hike.

Pushed through another meadow up to a pretty tame ridgewalk. Not steep and along an ATV track but an amazing view. I could see the Winds behind me and the Tetons off in the distance and various other ranges and features I don’t know the names of. Got water and set up camp for getting into town tomorrow. I’m excited for town, but I can still enjoy trail meals and bed.

Woke up and got out. Took roads that cut off a few miles. Pushed down to the highway into Dubois, where I met a retired forest ranger. It was a nice conversation and he told me some food options. He dropped me off at a cafe, where I met up with HD and Sweets. We had really great food.

We then went to a church in town that puts up hikers and bikers coming through town. Link showed up and some bikers did come through, but there was a rodeo that night so we went out. It was an interesting event. It’s definitely a different culture than what I’m used to. Came back and went to find some ice cream. Went out for a few drinks before heading to bed.