May 15.  The most notable part of today was meeting a hiker named “Voyager”.  I usually avoid putting other hikers’ names in the blog, but this 68 year old man is somewhat well-known in the hiking community, and has his own trail journal online.

Another hot day out in range land.  I kept approaching this hiker, watching his slow but steady gait, taking a break myself under some trees, then catching up to him again and taking another break.  He was a good pacer, though he didn’t know it.  Finally I did catch up to him and we talked as we walked.

Wild white hair like Einstein, his gear obviously well-loved with much patching, a big laugh, a lover of backpacking.

Voyager told me some stories about past hikes.  He told me about hiking the Appalachian Trail a second time, years after his initial AT hike, and how hikers’ increased cell phone use had changed the trail experience.  He said he’d often hike by other hikers and say “Hey”, but they wouldn’t respond because they had earphones in their ears.  He’d say “Hey” three times in a day to the same person, and finally they’d respond, “Hey?” by the end of it.  He was saddened by it, but we also both laughed at the image.

We parted ways in the afternoon so I could start a long side trip to a cow trough in the middle of a range.  My approach across the fields unintentionally herded the nervous cows to the trough, where they bellowed, stared, then backed away as I neared.  It was a little intimidating to face the large herd, and I was glad that they acted so skittish. 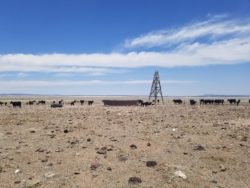 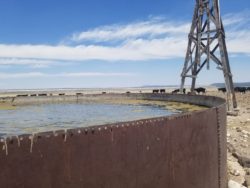 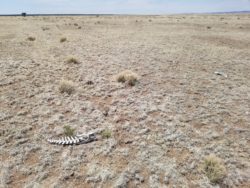 The trough was notable because it was the dirtiest source I pulled from in New Mexico.  Algae water, with green strands growing up from below and floating on the surface.  I took a few photos.  I had to swipe the strands aside as I dipped my bottles into the water, watching bugs and debris funnel into it then.

Definitely a double treatment water source situation.  In the end, it filtered and sterilized clean and clear.

May 16.  This was a long day of road walking 15 miles along a dirt road, passing by several ranches.  The CDT is different from my two previous long distance hikes, because it is less developed.  It often feels like going back in time.  My experience on the CDT (long road walks, unmarked trail at times, trail lesser known by locals) is like what earlier hikers experienced on the Appalachian and Pacific Crest Trails, years ago.

The road walking was starting to feel tedious, less of a wilderness experience compared to hiking on a path in a wilder area.  All day rancher trucks passed by, some considerately slowing as they approached, most still kicking up dirt clouds.  Not the same peace felt out here, though still beautiful in a way. 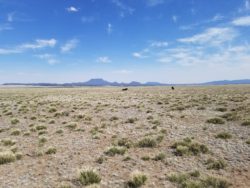 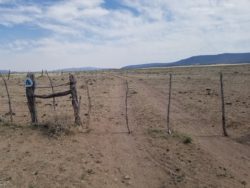 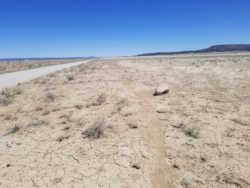 I expect with time, the CDT experience will look much different: trail transitioning off roads, more hikers attempting each year, trail better maintained and marked.  Though sometimes I wish that those features were a reality now, it will be neat to support it and watch the trail develop from what I knew it to be on my hike.

May 17.  I camped with a large group of hikers last night, and then they passed me in intervals as I rested in the morning.  It was nice to have company out on this approximately 30 mile road walk through dry ranch land.  Looking ahead from my break spot, I could see a person or two at 5 different intervals, instead of one long lonely road ahead.

There was no shade to be had, and I tried to avoid the dustiest spots for my breaks.  I had to laugh at how even finding a rock to sit on was a treat in this flat landscape.  It was a luxury to sit and eat on that rock.

I was deliberating all day about taking an alternate called the “Cebolla alternate” or sticking to the CDT.  The alternate cuts off 37 miles of the CDT, and I couldn’t help but think that the CDT is shaped in a circuitous “c” in this stretch for a reason, surely planned that way to show hikers some neat features?

I decided I wanted to stick to the official CDT, but would need more water than I had capacity for at the moment.  I had accidentally left one of my water bottles in a previous town.  Thus, I started scanning the landscape and eyeing up the many alcohol bottles thrown roadside.  I picked up a beer bottle, a larger glass bottle with good volume, plastic water bottle, small plastic spiced rum bottle.  It was quite the road for salvaging drinking vessels.  Later I thoroughly sanitized the rims, sterilized the water I filtered in.  It would’ve felt much grosser if I hadn’t spent the last week drinking cow spittle water.

An hour or so went by quickly with this search to occupy me.

Later I watched everyone ahead of me turn off onto the Cebolla alternate.  I stood there and deliberated a while, then continued on the CDT. 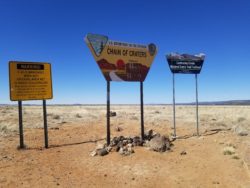 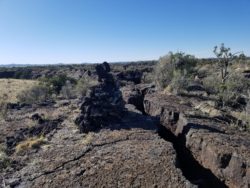 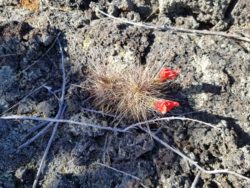 At first it didn’t appear to pay off, with a 2 mile road walk along an asphalt highway with a small shoulder.  But then I got to the Chain of Craters sign, and the trail wound through pretty open desert with lava outcroppings.  Even better was arriving at the first large lava area, hiking up and through it.

The trail was well marked, and brought back a lot of good memories of PCT lava fields.  In this case, the lava seemed less eroded, trail winding over solid lava slabs.  Lots of forms, sometimes like icing rolls, lending themselves to the image of molten lava oozing along.  It was amazing too, to see plant life, in this case junipers and cacti, thriving amid the lava base.

Pretty, unique.  It was the kind of thing I like seeing out here, natural wonders, a small footpath.  So good to finally get off the road.

Neat to see the lava amid the yellow desert, grassland, too.  Dark mass breaking up the yellow.  What a contrast.

I hiked to a spot close to a windmill, with a plan to camel up first thing tomorrow.  Pretty evening, pretty sunset.  Not lonely, somehow, just peaceful, nice.

Glad for a pretty day, by day’s end, a reminder of the peace and beauty to be found out here.  Nice to get to know some hikers around me, and also choose my own path.

May 18.  Once I packed up, I headed across the desert to the windmill in sight.  On the way, I watched an elk bound across the landscape, then a truck drive by on a dirt road.  I wondered if the driver owned the water tanks and windmill ahead, and if he shook his head over hikers heading to his tanks as their water source.  What drives a person to choose to hike a trail that requires dependence on cow troughs?  I could see many wondering what the draw is, haha.

Fortunately, this tank consisted of one enclosed supply tank, accessible to hikers via a square opening cut high into the fiber glass, through which a hiker could dangle a glass bottle in the water at the bottom of the tank, via a long wire handle.  Clearly a jerry-rigged invention by someone, and how thankful I was to have it.  If not: water, water, right there, and not a drop to drink!

The water level at this point was down to the last foot left in the tank, so I had to stand on a well-placed stone step, reach my arm down into the tank, and lower the bottle til I heard bubbling, then silence when the bottle filled.

I filled all my bottles.  Cleansing the ones I had picked up roadside yesterday, filtering the water and sterilizing it all took over an hour.  I left carrying more liters than my typical, for the lengthy dry stretch ahead.  My pack creaked and swayed, and I looked forward to a point 5 miles ahead, where I planned to drink at least 1 liter.  Surely that would help. 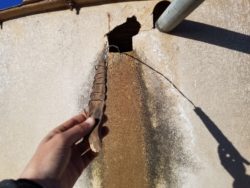 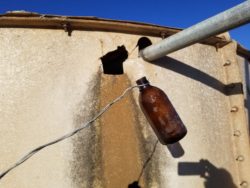 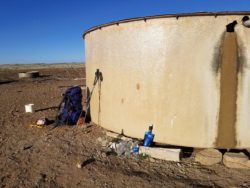 The morning hiking was nice as usual, cooler temps, gentle lighting.  The day was spent skirting numerous craters along the chain of craters route.  Mostly appeared to be rounded hills seen from below.

May 19.  Late afternoon on this day, the trail passed by a parking area for a small loop trail within El Malpais National Monument, with numerous caves, and a crater.  I deliberated over hiking an extra few miles, but in the end decided to hike it anyway.  It was well worth it, with neat views of New Mexico, canyon walls in the distance, this loop itself with large lava caves, apparently home to many bats, and a beautiful hike up and around the rim of one crater.  Such a neat and well-kept trail, lined with lava rocks, steps at one point. 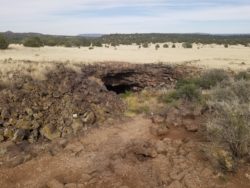 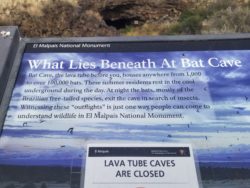 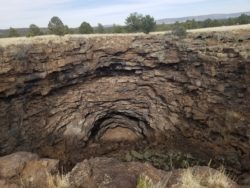 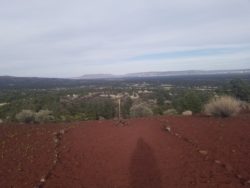 It was a good feeling to come upon a spontaneous adventure, and more wild views in New Mexico than range land.