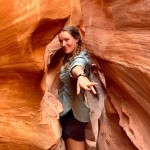 Plan A… Scratch That.

A show of hands, whose plans for 2020 got completely wrecked? Yea, same. In a year where we all felt so separated and divided, that common denominator stood strong. In March, I watched as a number of my hiking friends had their thru hike plans shattered. My heart broke for them, but secretly I was relieved. “Thank god we’re planning a hike that starts in October instead of now,” I told my partner, Raphael. We had been planning a thru hike of Te Araroa in New Zealand, which would start in their Spring (our Fall). Surely things would calm down by then? By late summer we realized just how wrong we were, and those plans were scratched.

Plan B…. Scratch That, Too.

I first started hiking a few years after college, when I adopted a hyperactive dog who needed endless exercise. Since I am the kind of person that only has obsessions, not hobbies, I immediately went all in. Someone planted the bug of a thru hike in my ear, and I never looked back. In 2018, I hiked the Appalachian Trail. Two weeks in, I knew it wouldn’t be my last long distance trek and I passed the time daydreaming of the next trail I would hike. I met Raphael, a chronic adventurer, shortly after completing my thru hike and together we started firming up plans for a big trip together. Te Araroa seemed like the perfect combination of what he and I were individually looking for in an adventure and canceling those plans was a hard pill to swallow.

Fortunately, my trail bucket list is rather long. So canceling the TA just meant I got to cross another trail off my list instead. We started with the Superior Hiking Trail in Minnesota, and I am so grateful the stars aligned enough for this hike to be a possibility. The North Shore in the Fall is a true sight to behold, and the mild terrain and moderate mileage allowed us to bring said hyperactive pup along with us, an experience I wouldn’t trade for the world. But still, this was only a 300 mile trail and we had originally planned to hike 1800 miles. My plan B was to follow up the SHT with other medium length trails in the United States. The Arizona Trail was the first option on my list, but halfway through gear purchases to help me survive the desert, the AZTA formally asked thru hikers to postpone their plans due to the complications of vast wildfires and the pandemic combined. The Pinhoti was one of the few trails left that both appealed to me and could be hiked in the late Fall. It was only two weeks before our potential start date that we came down with COVID and those plans were canceled as well.

At this point, winter was creeping in and winter hiking just isn’t my thing. Even though my leave of absence could have lasted through February, I decided to go back to work and save to hike another day. Peppermint, a friend of mine from the AT, told me he was hoping to hike the CDT in 2021 and casually invited me and Raphael to join. My immediate response was Hell No. The CDT is just an unreasonably long trail. The desert sounds challenging, the San Juans sound dangerous, and I was really hoping to go my whole life without having to see a grizzly bear except maybe from the safety of a car.

The CDT has, until recently, been the trail I always said I would never, under any circumstance, thru hike.

As I fell back into the “real world” after the SHT, I noticed how different the transition was from when I returned from the AT. After the AT I was noticeably different. I had gone into the trail unsure if I could last more than a week, and I finished the whole damn thing despite significant injury, depleting funds, and the endless rain that haunts all AT hikers. I was challenged in ways I could have never imagined, and I overcame each hurdle successfully. I self-conducted all my research beforehand and went from a hiking novice to a successful thru hiker in less than a year.

Thru hiking the SHT was an entirely different experience. I went into the trail confident. The trail was pleasant and fun. Falling back into the routine of hiking was comforting and enjoyable. The weather was moderate, the terrain forgiving, and the views were serene. Ultimately, it was a vacation, not a challenge. And while I am certainly not complaining, it simply wasn’t the same.

What made the AT such a monumental experience is that it scared the shit out of me. Peppermint’s invite echoed in my ears, and so did my fearful response. So fuck it. “If your dreams don’t scare you, they aren’t big enough” (Ellen Johnson Sirleaf). So let’s be scared. Let’s get beat down by desert wind storms. Let’s learn to navigate and trailblaze. Let’s face solitude and silence and learn to embrace it. Let’s hike the CDT.

Raphael grew up in Boulder, Colorado and has a fondness for the Rocky Mountains. There are significantly fewer thru hikes on his bucket list, but conveniently the CDT is one of them. Peppermint also hails from Colorado and we have made arrangements to start the same day. Not long after we started firming up these plans, I reached out to my friend Hot Taco. Taco had planned to hike the PCT in 2020, and obviously canceled. He was keeping his fingers crossed for a 2021 PCT permit but immediately changed plans when he heard we were hiking the CDT, deciding that the PCT would be better saved for a year when you can safely be as social as you want and get the full community experience that comes with the more popular trail. No, my pup will not be joining me on the CDT. We will start in late April at the Mexico border.

My name is Heidi but you can call me Picasso. I hail from Charlotte, North Carolina. I hiked the Appalachian Trail NoBo in 2018 and have since hiked a number of smaller trails, including the Superior Hiking Trail (MN) and the Foothill's Trail (SC). I am currently hiking the 2021 CDT NoBo hike with my partner. When I am not hiking, I work at a brewery and pursue a side career of being an artist. Oh, and I love dogs.