Reaching Canada and the Triple Crown

I first learned of thru-hiking seven or eight years ago. I’d heard of the Pacific Crest Trail before, but I figured it was something just one or two intrepid souls had actually completed, not hundreds of people every year. 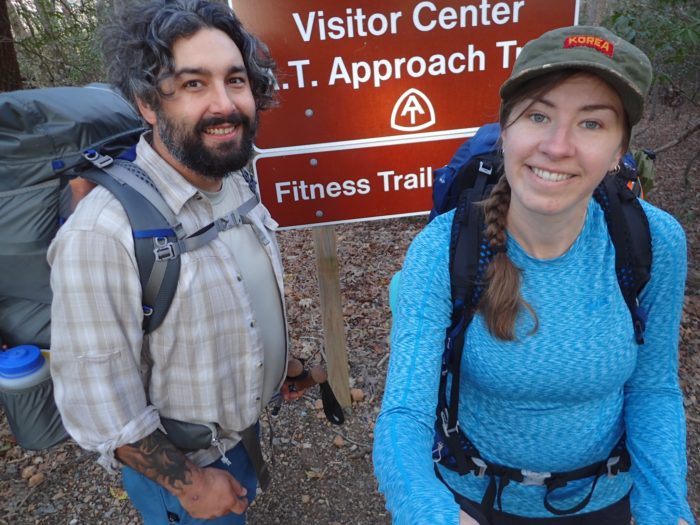 The day it all began, on the Appalachian Trail.

That all changed one gloomy afternoon in 2010. Piñata (although back in those days he was just plain old Paul) was watching a documentary on public television about people thru-hiking the Continental Divide Trail. I’d never heard of it before, but I was fascinated by the idea of experiencing national parks like Yellowstone and Glacier by walking through them. One of the bearded young men in the documentary was having a bad day, and he said something that has stuck with me ever since. Something to the effect of: “ The worst days up here are still better than the best days down in society.” I was mesmerized, but I didn’t think I could ever undertake such an adventure. 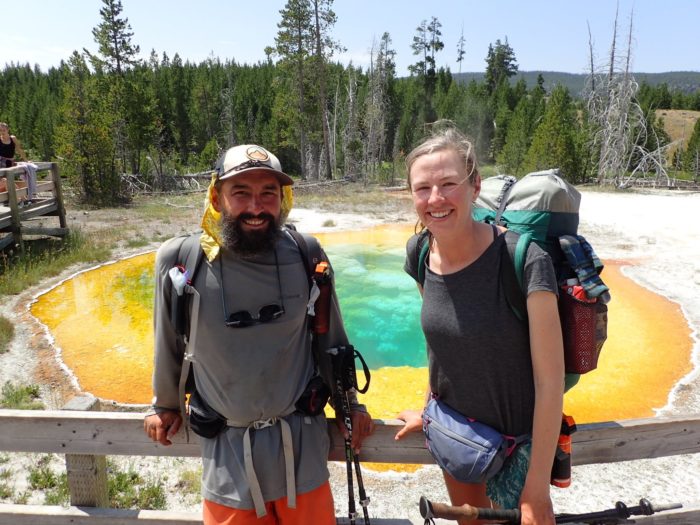 Walking through Yellowstone this year on the CDT.

It was then that Piñata started telling me about the Appalachian Trail. I’d never heard of it, so he showed me the National Geographic documentary about the trail. This trail wasn’t populated with just a bunch of bearded wild men in their 20s; there were also women, young people, old people, foreign people. From that moment I was hooked. I was going to thru-hike. Someday. Somehow. 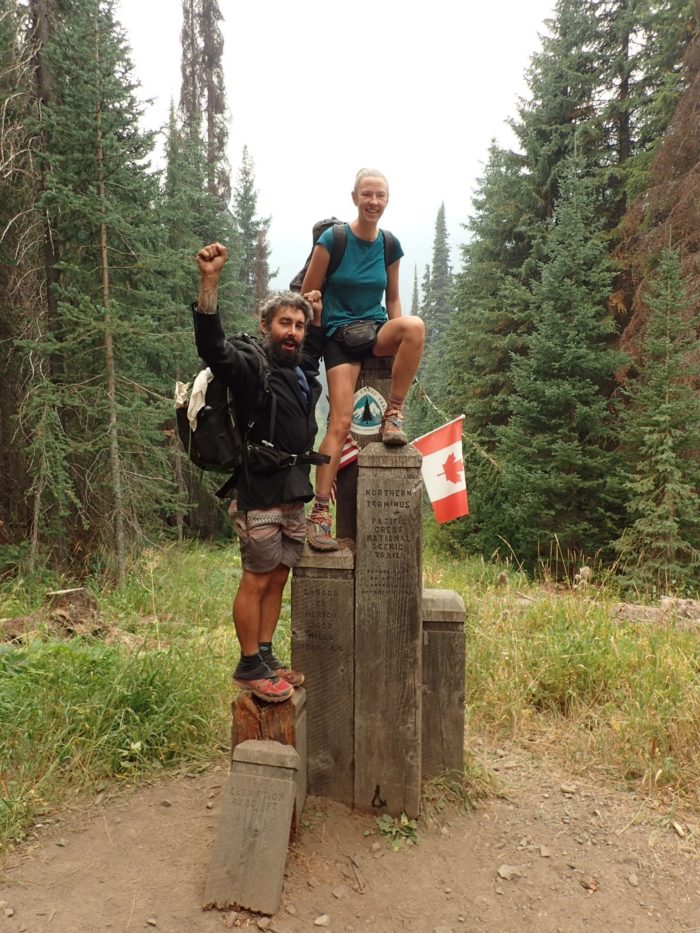 After finishing the PCT, we knew right away the CDT would be next.

I knew I wasn’t ready to “Brave the CDT” but in the back of my mind I knew I wanted to. Something about that wild trail fascinated me more than the others. Before I ever set foot on the Appalachian Trail, I knew that one day I wanted to hike the Continental Divide. But first things first. Piñata and I hiked the AT in 2016 and the PCT in 2017. And this year, we made that CDT dream a reality. 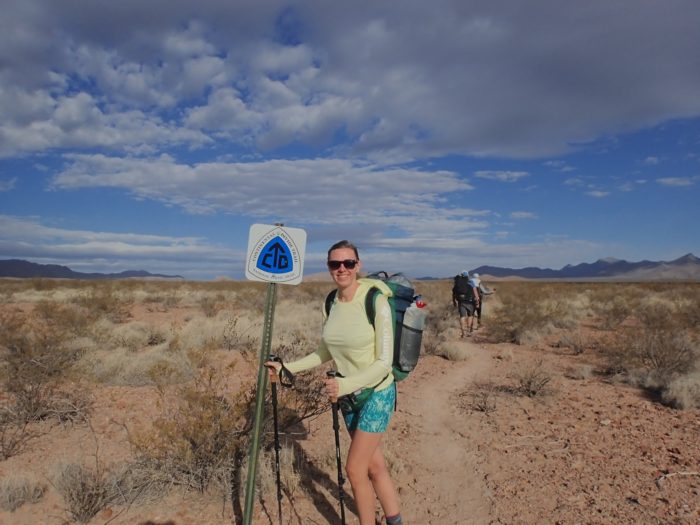 Taking the first steps on the CDT.

I can still hardly believe we’ve done it. Through the cold, heat, rain and snow. Through the fights and injuries, good days and bad. Over mountains, across rivers, under trees. Millions of footsteps spanning over 7,500 miles to a little cement obelisk marking the border between the US and Canada. On Sept. 3, we emerged from the forest and completed the CDT. 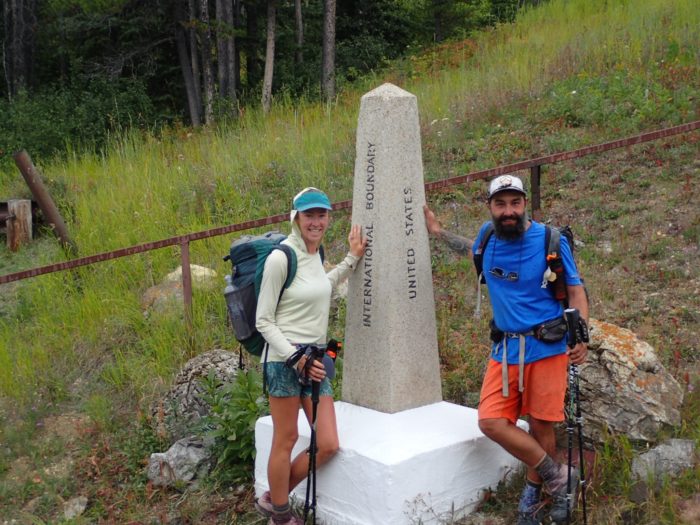 Reaching Canada on the CDT!

The final stretch of trail took us through Glacier National Park. The scenery was incredible; a perfect ending to the trail. Despite the fires that closed portions of the park as well as the Waterton terminus, the skies were free of smoke and we got great views. 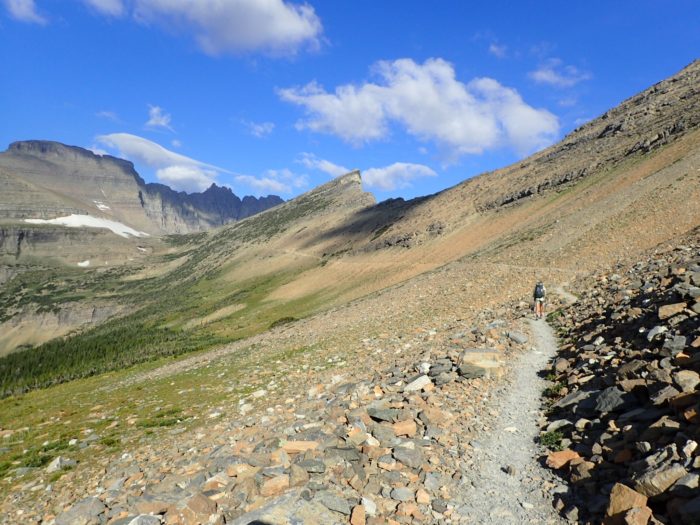 Our daily mileage was limited by our camping permits, so we took advantage of the lower-mileage days to sleep in and avoid rushing. Each day took us over a stunning pass. The mountains towered above us as we climbed above the lakes and streams. Some days were gloomy, others were sunny, but all were beautiful. On our final pass of the trail we were greeted with a rainbow. 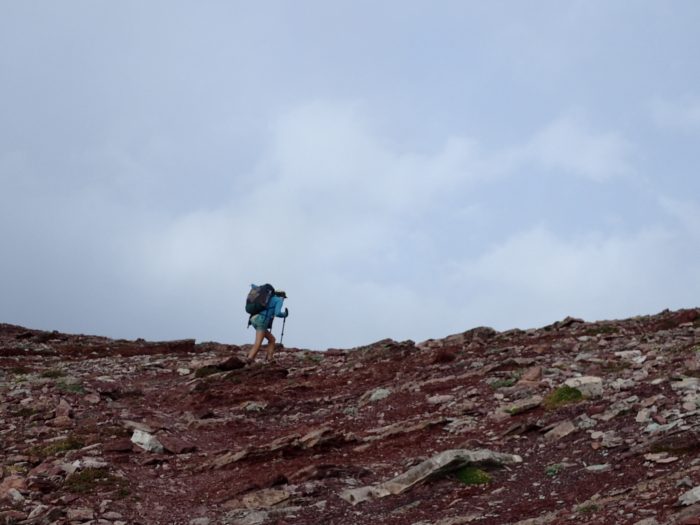 Despite the clear skies, we did have to battle some serious winds. Down in the valleys it was a gentle breeze, but up above the treeline the winds were enough to knock you over. A few times the gusts were so strong all I could do was plant my feet and crouch down until it subsided, lest I fall right off the mountain. We dealt with this back in Colorado and I found it pretty scary. This time around, though, I felt pretty comfortable. It really showed me that pushing my limits on this trail has really improved my confidence. The more you do something scary, the less scary it becomes. 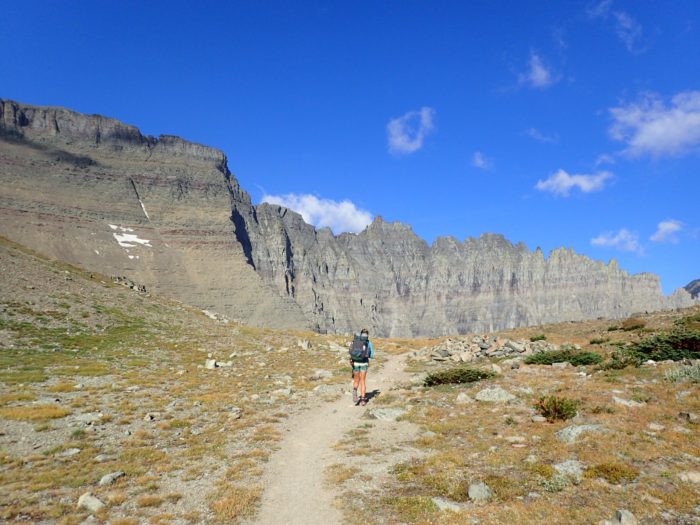 It looks peaceful up here, but the winds were no joke.

Our final day to the border was perfectly fitting. It rained a little and we kept a fast pace, both to keep warm and in a rush to the border. We walked among leaves tinged with yellow and red, reminding us that summer is slipping away up north. The terrain was mostly flat and we nearly jogged the whole way. We passed other hikers out enjoying the park, but we didn’t stop to chat, eager to reach our destination. We lamented that we wouldn’t see any cows since we were in a national park. We’ve spent more time with cows on this trail than any other animal, and probably people for that matter. (We saw them on the drive back to East Glacier so it all worked out). Finally, we caught a glimpse of parked cars and ran to the trailhead. 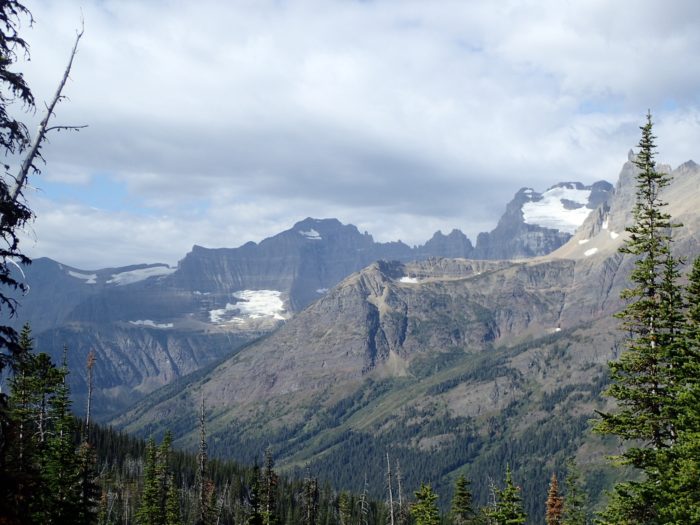 It was weird to end in a parking lot, but we immediately made our way over to the Border Patrol station and the monument marking the international border. We took our celebratory photos in the cold, then walked back to the parking lot to hitch a ride back to town. As luck would have it, the very first car I stuck my thumb out at stopped and offered us a ride back to East Glacier. 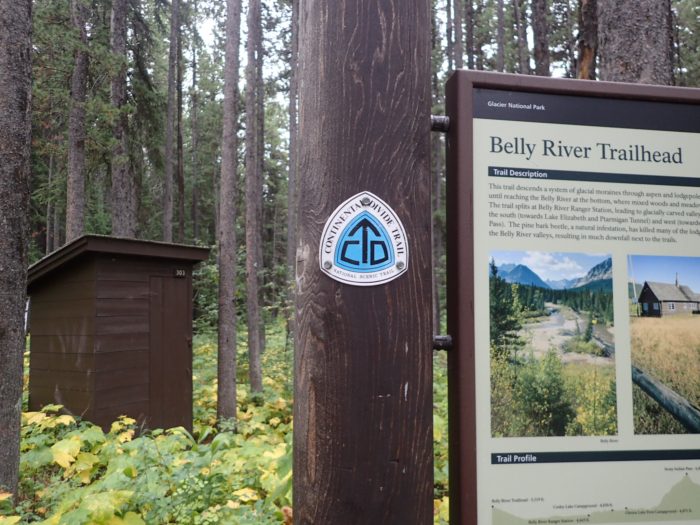 A surreal ending to an epic trip. I’ve never hated a trail as much as the CDT, but any thru-hiker knows that extreme lows tend to precede extreme highs. In the end, I love the CDT.