July 4.  Everything- tent, backpack, grass- was soaked with a heavy dew this morning.  That came as a surprise, especially following an evening that was so hot and dry, I couldn’t comfortably rest inside my tent until the sun had set.

I packed up and waved to the hiker I had camped with overnight.  “See you later.”  I saw him again sooner than expected.

The trail ahead was overgrown to the point of frustration, forcing a hiker to push through pine limbs and climb over fallen trunks constantly.  This was due to the Morgan Creek fire, which had burned through the area the previous year.  Though annoying for hikers trying to walk by, the abundance of small pines springing up trailside was a good example of the cause and effect cycle of fire-induced sprouts.  Destruction begetting new life.

I pushed through the overgrowth for a few minutes, ultimately finding it too unpleasant to be (mildly) poked, stabbed and soaked by the overgrowth and deadfall.  I studied the maps and decided to go back and take a nearby dirt road instead.  I soon met the hiker I had camped with, and described the conditions ahead.  He chose to follow the dirt road as well. 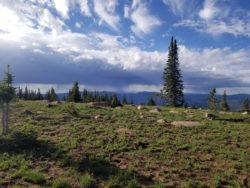 We watched clouds darken above, as we hiked through the morning.  Sure enough, rain soon fell and thunder boomed.  I was glad that we were hiking down at 8000-9000 feet of elevation, compared to the much higher elevations of past days.

The thunderstorm quickly ran its course, and we started a gradual ascent up to higher elevations.  The next few hours, the trail followed an ATV road up and down mountains.  It was a good road for hiking beside someone and chatting.

The other hiker often mentioned the Wyoming-Colorado state border a few miles ahead, and voiced his excitement over reaching that milestone.  We stopped for lunch, then he set off again while I sat and snacked a while longer.  I wasn’t as motivated by the border crossing ahead, as I continued to dwell on the usual questions: What am I getting out of this hike?  Is that enough?  What do I look forward to in the miles/states ahead, and is that enough?  The long ebb of curiosity and interest had definitely begun at this stage in the hike.

All the same, when I hiked up to the border, it was pleasant to see the other hiker sitting there, celebrating the site with a snack. 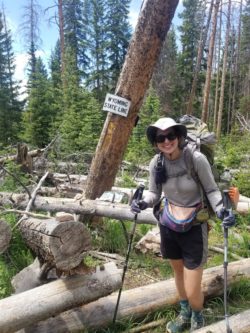 We both took a good break there, pulling out our tents to dry in the sun, taking photos with the sign, eating and drinking, and wondering what was ahead in Wyoming.

July 12.  I began hiking quite early this morning, in an attempt to avoid the heat for a few hours of hiking out in the Great Divide Basin.

To hike through the Great Divide Basin on the CDT is to hike 120 miles over a high desert.  The basin is exposed, arid and often windy.  In other words, similar to much of the landscape along the CDT, though different in the lack of elevation change: flat.

The basin section of the CDT has a reputation among hikers as boring and uninspiring.  I could imagine the monotony, but was also looking forward to a respite from hiking over mountains, and was intrigued by the very words “Great Basin”.  It sounded so remote, expansive and distinctive.

Early that morning, I hiked out of the town of Rawlins into the wide open range land of sagebrush and not much else.  I hiked along the indicated dirt roads, observing the dry cracked cakes of ground in some places.

As the sun rose higher, I often stopped to sit on my backpack like a little bench, the landscape lacking other seating options.  I took many breaks sitting on the pack, back to the sun, body shading my legs, looking out at an open land of dirt, sagebrush, cattle, and sky.

During one such break I sat by a sign post and watched a car and dust cloud approach from miles away.  The car appeared slow moving at such a great distance.  I felt as if I were on the set of “Lilies of the Field”.  The car passed, and I shouldered my pack and started hiking again.

Almost as soon as I noticed flowing water in drainages beside the road, mosquito multitudes landed on my legs.  A second car that I’d been watching from miles away finally neared.  The woman inside stopped and gave me a cold electrolyte drink, a local who knew CDT hikers pass through here, and packs drinks for them when she drives this road.  I waved at my legs as I spoke to her, thankful for the drink but distracted.  I sprayed on the bug spray as soon as she drove away.  It’s always a relief when that deters them.

Other than for a mile beside those wet drainage ditches, the mosquitoes were not a problem in the basin.  The lack of bodies of water was good in that way. 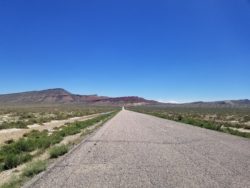 Around 4:30p I found sufficient shade from a rocky patch to lie in, partly shaded.  I rested in that outcropping.  When I opened my eyes again, I saw a hiker approaching.  He introduced himself, then hiked on.

I caught up to him at the next cow water hole, which thankfully offered a covered metal well to dip out of.  The well was fenced, with green grass inside and without, cows grazing nearby.  It was a refreshing area.  I chatted with the hiker and ate a ramen, and filtered water.

Big dark clouds had gathered and a few drops fell.  We both put on rain jackets.  The hiker started hiking, and several minutes later I started myself.

I hiked further through that flat land, over mild rolls, on the dirt road.  Dark grey towers of cloud roiling up to the east, rumbling.  A bright double rainbow over there.  Sunlight on my miles ahead. 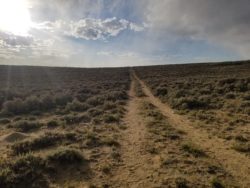 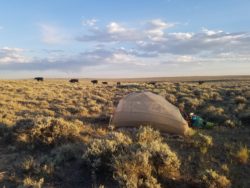 The storm drifted on its course, eastward.  I was left untouched.  I stopped and camped among the sagebrush.  It was a pretty sight.  Cows grazed nearby, then looked at me and trotted away, skittish.

I slept well.  It had been an approximately 30 mile day of hiking.