Heading out of Grants I was looking forward to Mount Taylor, which looms 11,307 feet tall and gentle, above the valley.

Taking the Mount Taylor alternate would make the mountain the highest point in my hike of New Mexico. I had first seen it on the road walk into town with streaks of snow on the southern face. Josh and I started the road walk late in the morning, but ended up spending well over an hour at Pizza Hut. We used their Wi-Fi and ate a bunch of salad. Not pizza, weirdly.

The town sprawled out to the north. Eventually we started climbing. We walked by a trash-covered expanse with thousands of colorful shotgun shells by the side of the road. At the trailhead, which had a huge iron CDT sign, we took a snack break and a couple of people parked and headed up. The trail started going up in earnest.

For a while I was wondering where those two people had gone, and then I remembered that one should never underestimate a local. They often start out with bigger lungs and more red blood cells than I have, sea level baby that I am. We got to the top of the climb and the trail meandered for several miles on a plateau, skirting the edge of the Acoma Pueblo for a while, with Mount Taylor visible in the distance. 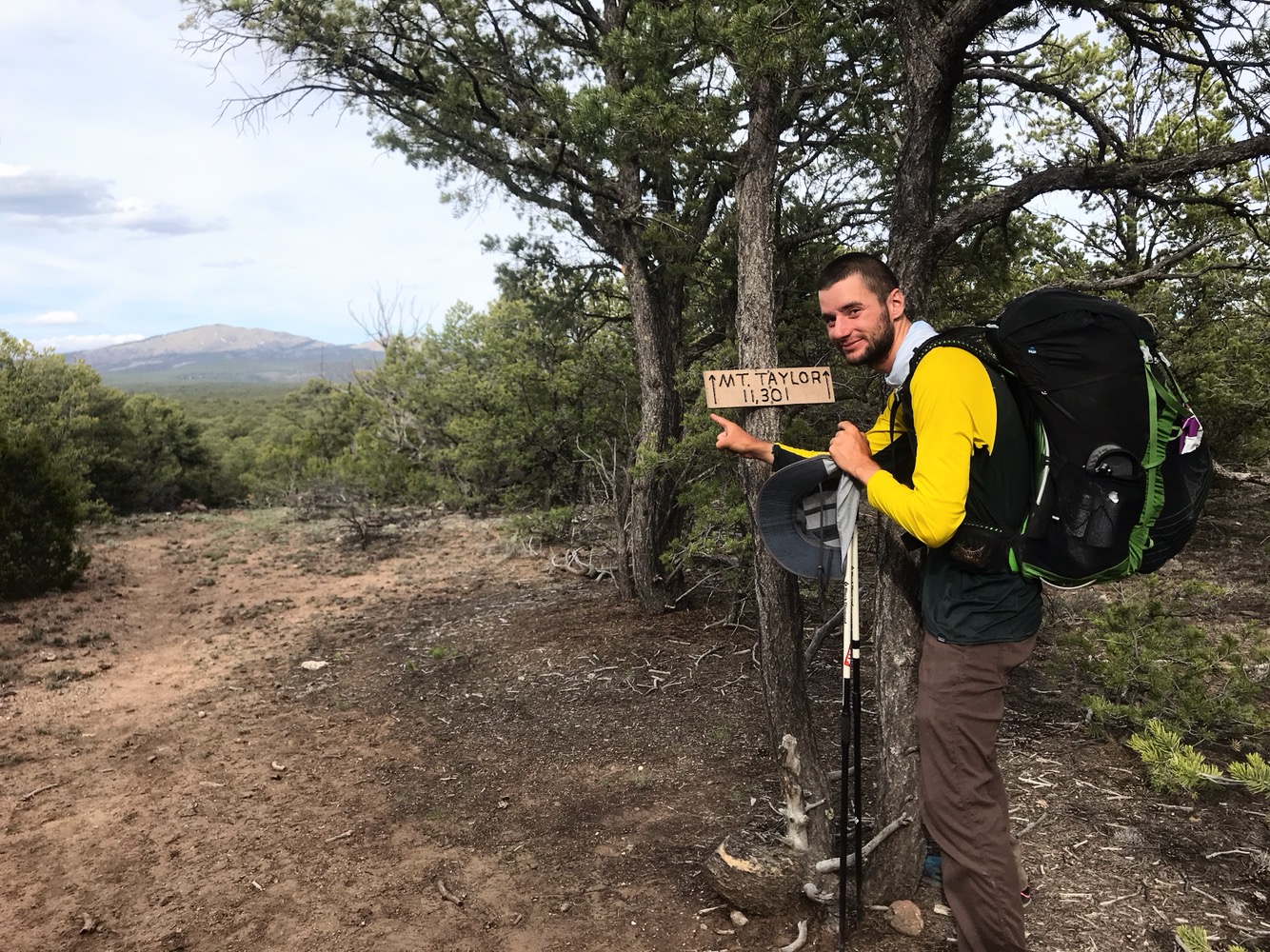 Josh and I camped a couple of miles before the summit, planning to head up early.  We overslept and were slow getting ready, though, so we didn’t get to the top until 10 a.m. or so.

Much huffing and puffing was involved! 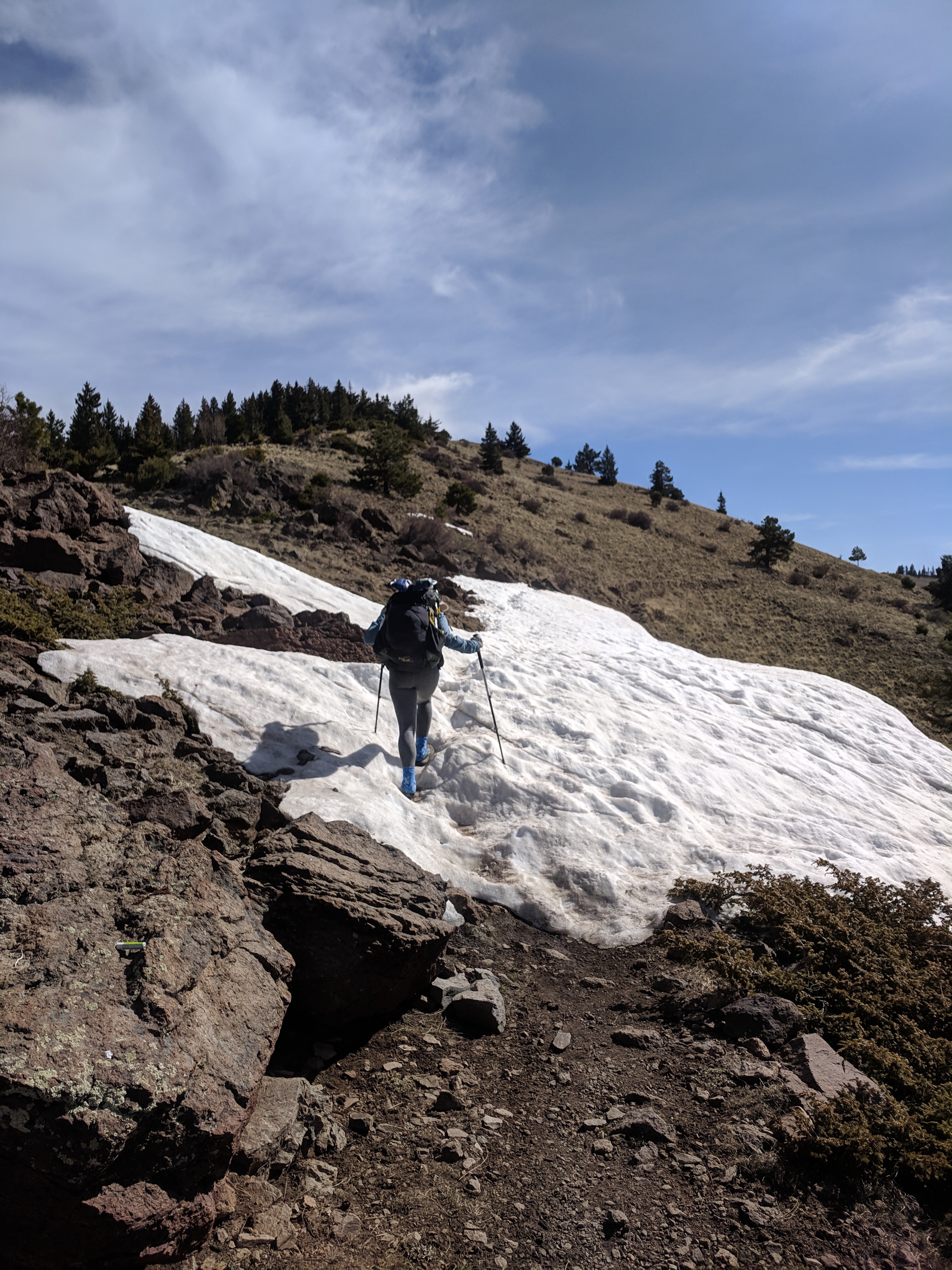 There haven’t been many steep climbs in New Mexico. We could see Grants and the valley beyond from the top. 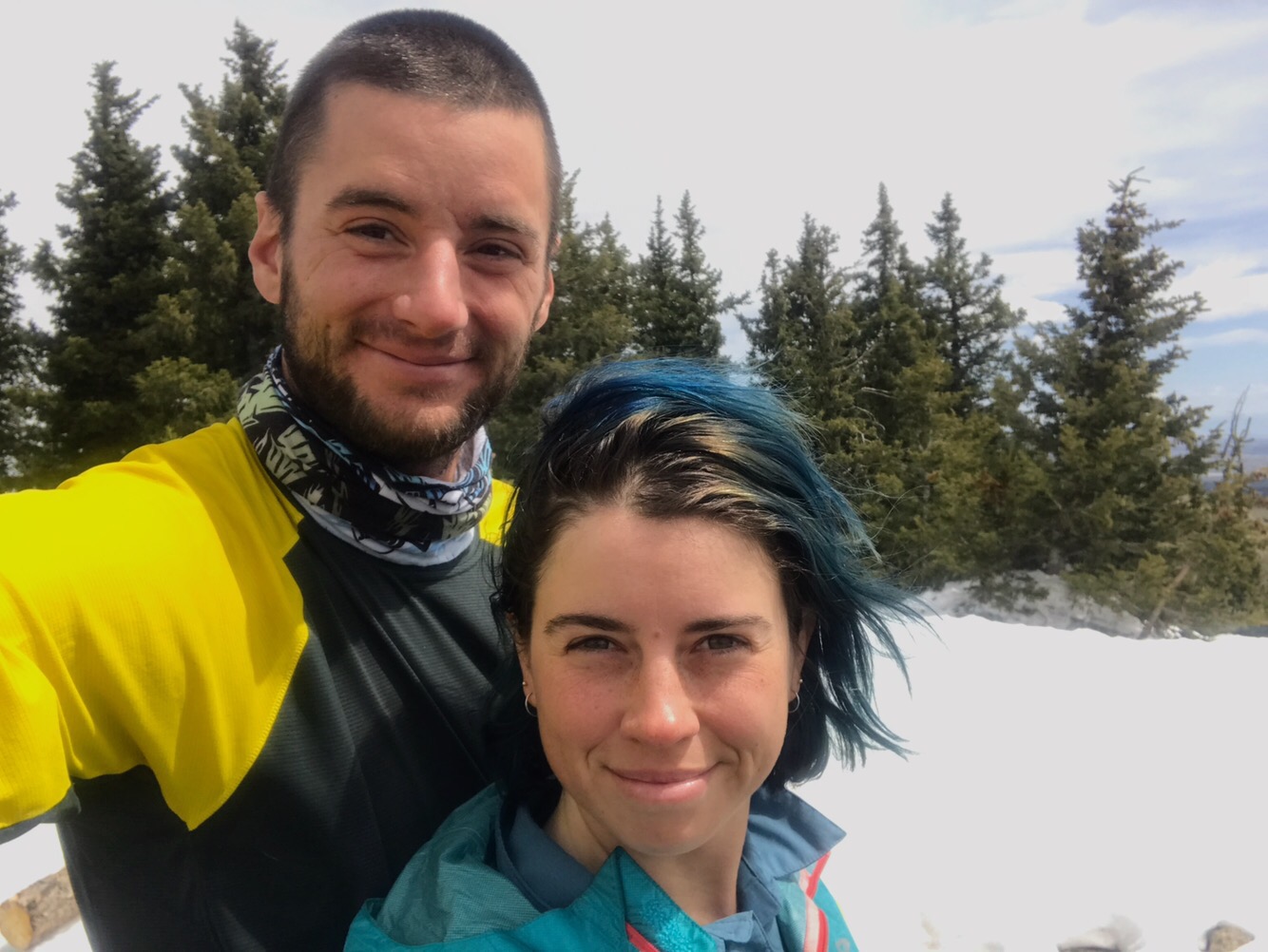 Jonathan Ley notes on his map of the area that Mount Taylor could better be honored by those who pass through the area if it were called by its native names. It is called Tsoodzil by the Navajo, Dwankwi Kyabachu Yalanne by the Zuni, Kaweshtima by the Acoma, and Tsiipiya by the Hopi. Zachary Taylor, the president for whom the mountain was named, was a captain during the Black Hawk and Second Seminole Wars.

I think it would be better to uphold the tribes’ enduring relationships with the mountain, than to pay respect to a Southern slaveowner who fought for settler interests.

The way down was a little sketchy, with some postholing through the trees. A hiker who we’d seen briefly at the top was wearing shorts and must have been hurt on the icy crust of the snow, because some of the knee-deep footprints were blood-smeared.

While I never feel like a cool kid hiking in leggings, rather than shorts, I’m often grateful for the added protection.

Because we had been slow in the morning, Josh and I hiked into the dark to make up some miles. We camped off a dirt road, tucked under a juniper tree, in an unfortunately rocky spot. I usually try really hard not to alter the places I camp, but we had to do some rock relocations.

In the morning when I got up to pee I passed a blue thing in a bush and thought, “I wonder what trash that is?” Then I discovered both of my gaiters were missing. I had left them in my shoes, in the vestibule, next to my food like I always do. Josh pulled my gaiter out of the bush and I searched for my other one. I’m not sure if the rodent wanted it for food, bedding, or both, but I’m certain my gaiter was gone within its den, pulled into one of the many access tunnels, safe beneath the layers of sticks and cow patties piled on top.

The trail that day went across the tops of mesas. In the morning I saw a plume of smoke in the distance, which we passed by, far enough that I wasn’t worried.

In the afternoon I noticed more smoke. A lot of smoke, and the trail was going straight toward it.

Josh asked me what I thought and we agreed it was likely a prescribed burn, but if we got closer and saw no signs of management, we might have to hike into the night to get away from it. When we were very close (a thousand feet? It was hard to tell where the origin was) we could see the reddish gray hue of smoke building against the clouds, and a helicopter whizzed by. 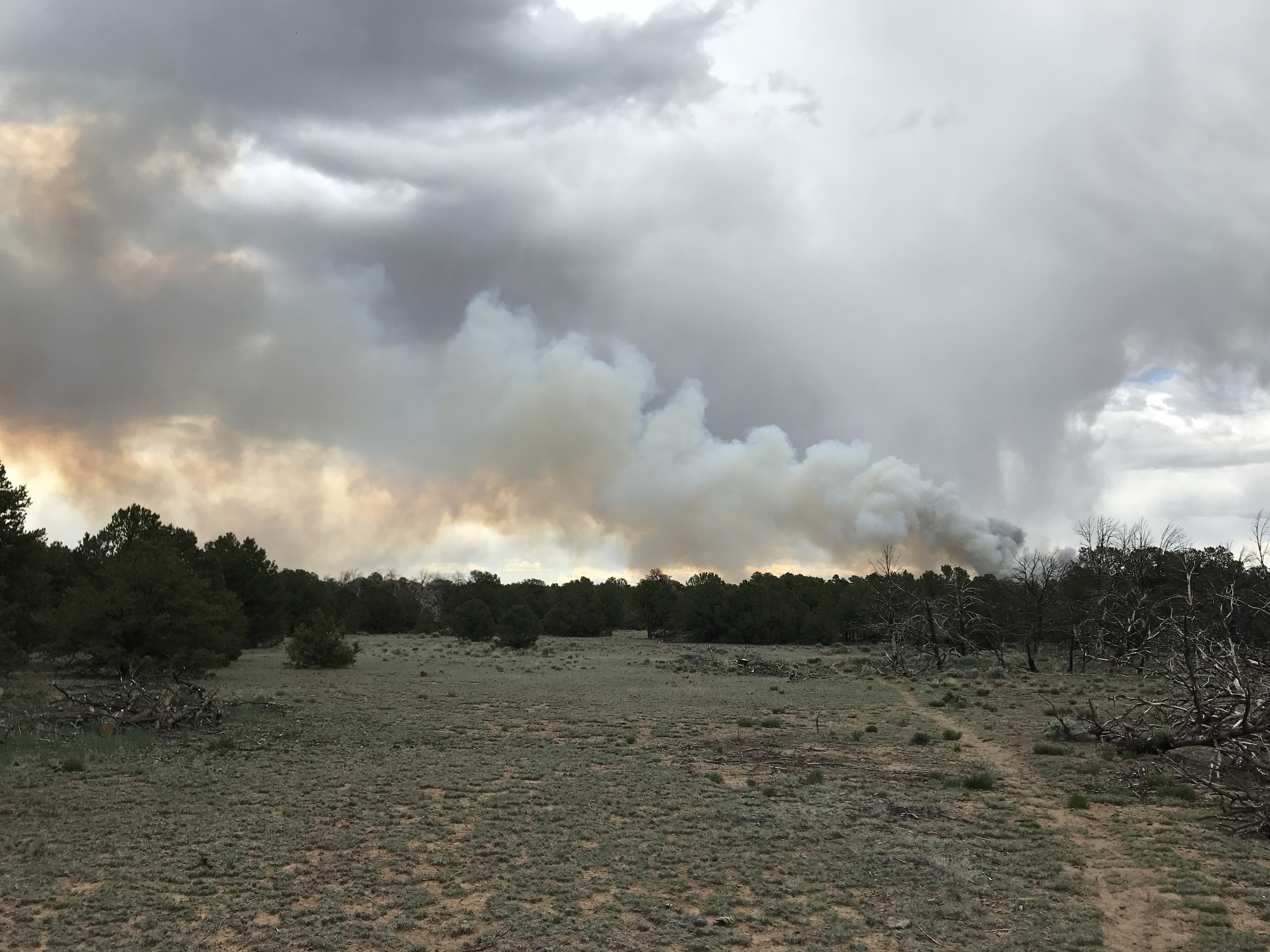 A few minutes later the smoke plume turned white and puffy. Josh called it steam smoke. Over the next half hour it mostly dissipated.

The trail took us down over the edge of the mesa, with amazing views of the valley below.

It was dusk, and cloudy. Josh ran down part of the trail, and we raced as some rain fell. We debated the best place to pitch a tent during a lightning storm, depending on terrain. We set up just under a tree, as protected as we could find with the wind howling through. 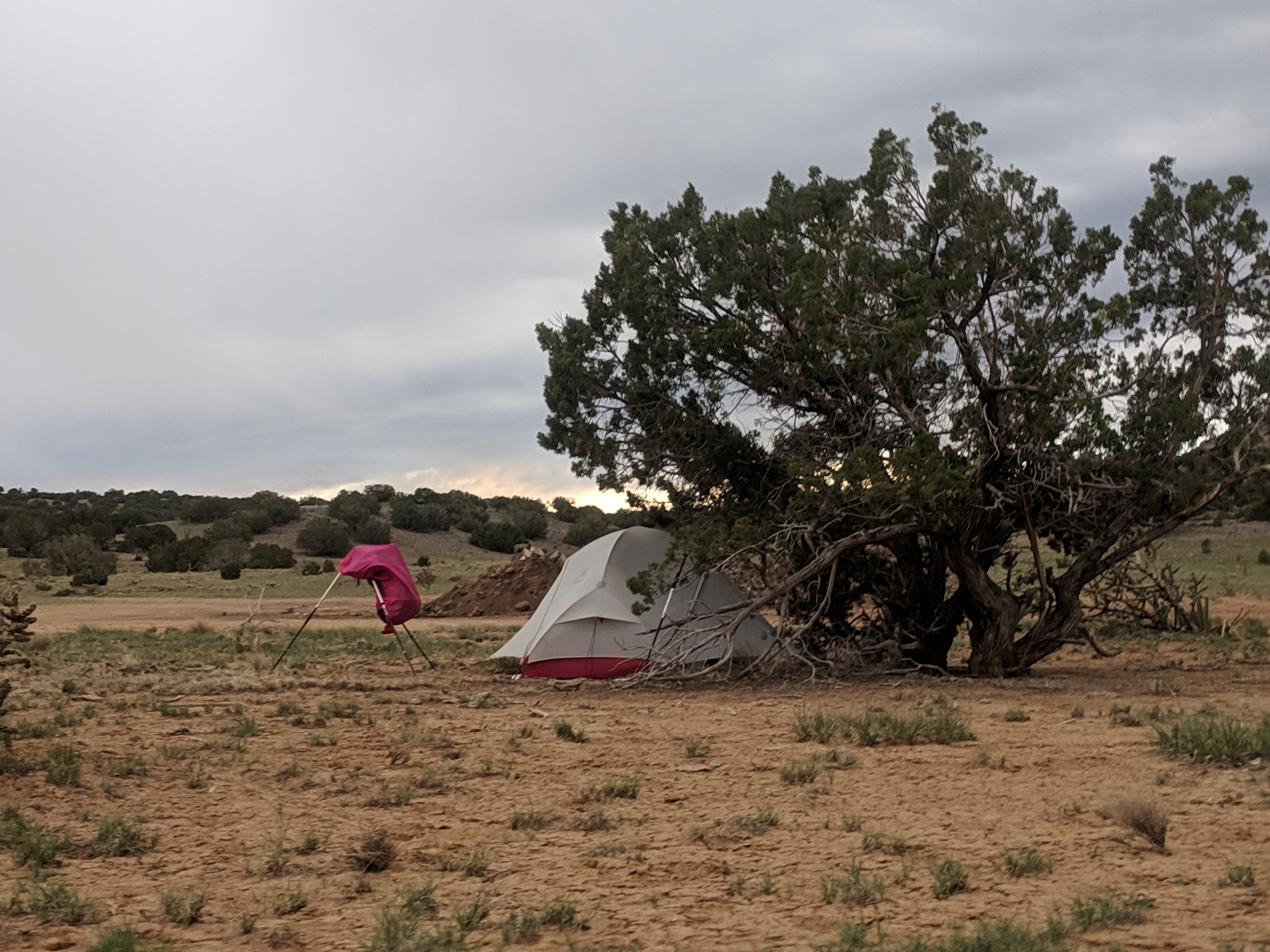 I sat on some cactus spines when I was cooking. It took some force to pull them out, but it didn’t hurt much after. The night was noisy with wind and hard occasional rain, but no lightning. A helicopter passed close overhead at some point, waking me up, my heart beating fast even after the noise faded.

The following two days we started to see some amazing sandstone formations as the trail wound around the edges of mesas. I kept stopping to take photos, captivated by each new shape and color. 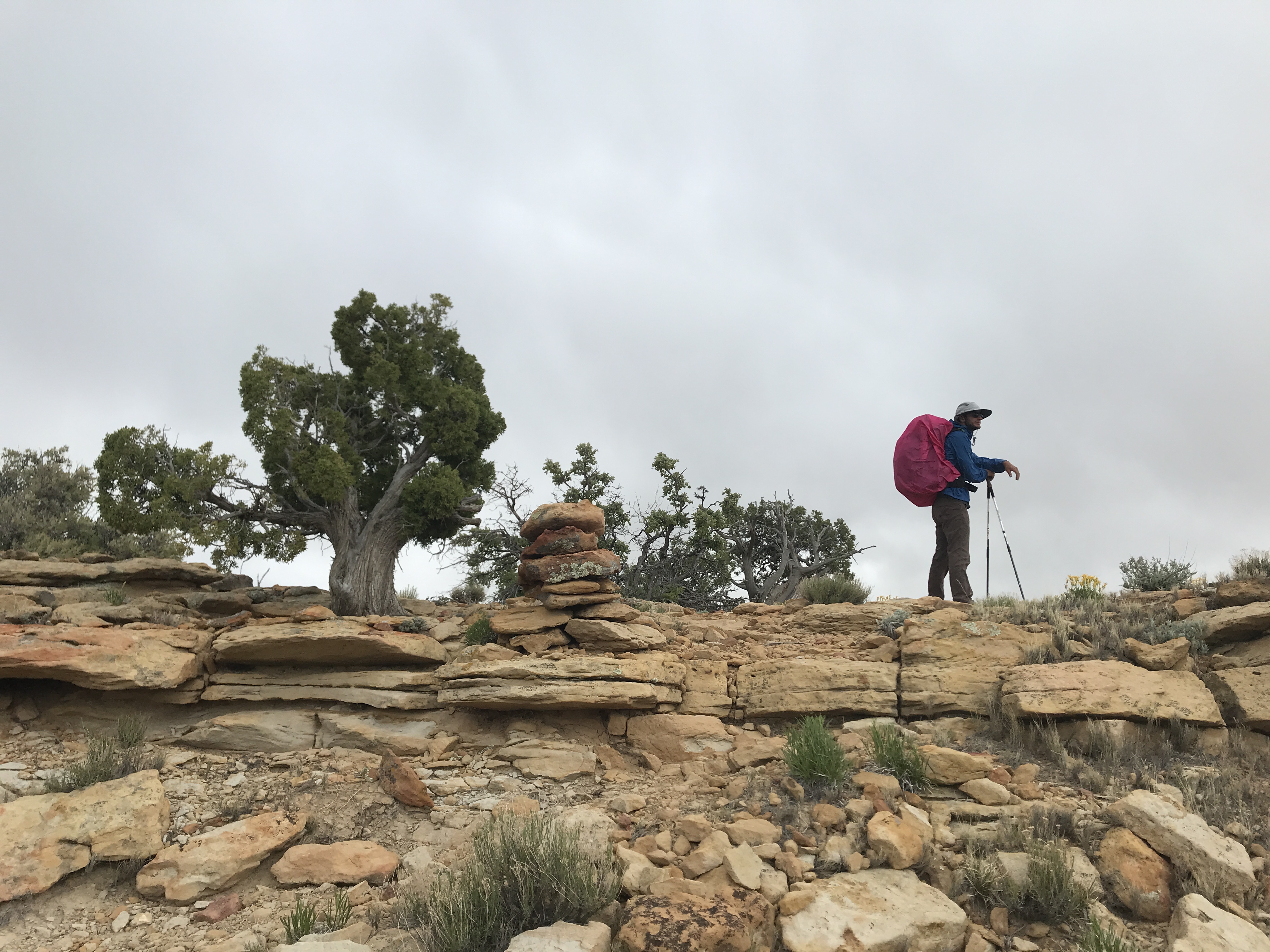 The cairns, too, became works of art, not only marking where to walk but calling attention to the stones themselves.

It was raining on and off, and once when Josh and I stopped to take a break, I took my shoes off and it started pouring. I had to scramble to pull out my pack cover and umbrella. I felt a little bitter about it, like the CDT is so extra, always trying to do more. More wind, more rain, more creek crossings on the Gila. Even more cairns! 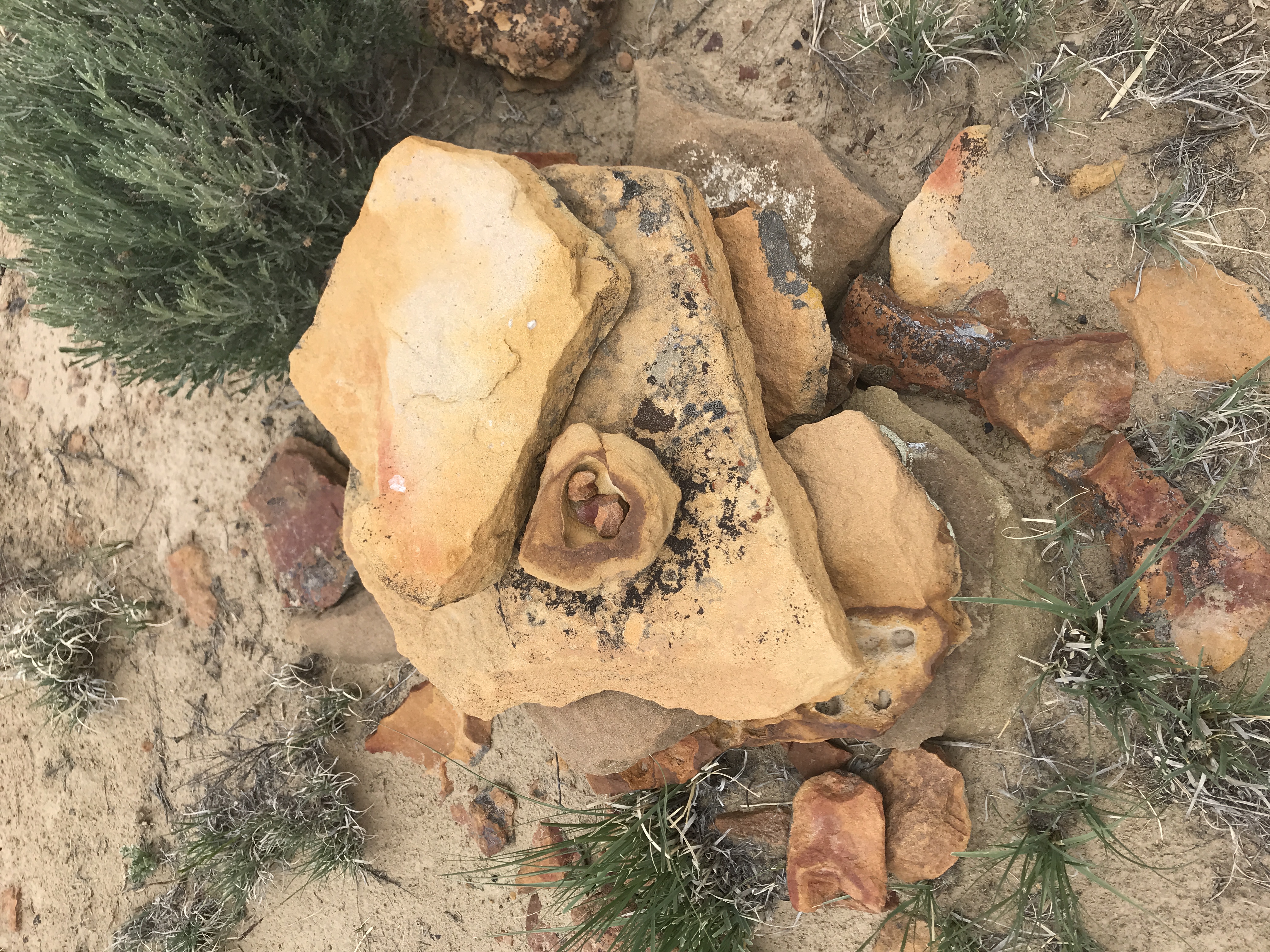 The section from Grants to Cuba was so beautiful. I feel kind of guilty for saying it, as if it means I haven’t been appreciating New Mexico enough before now. There have been landscapes that I enjoyed, either because they were unique and captivating, like the Gila, or because through repetition I gained affection for them, as with the piñon juniper scrublands in the miles before and after Pie Town.

“This is what I expected New Mexico to look like,” Josh said about this section. I felt that way, too.

My mother grew up in New Mexico. She moved to Taos from California when she was very young, with my grandmother, who dreamed about a new life. They returned to California when my mom was a teenager. The land we grow up with imprints itself upon us indelibly, though, even if we leave it. I’ve never been back to Taos with my mom, but walking into the mesas of northern New Mexico feels like a return. I lay no claim. My family was only here for a blink in the history of this land. The passing nature of my own hike, going through, feels right.