Single Track and Thunder in the Burro Mountains

On the way out of Lordsburg, Josh and I loaded up on water at Saucedo’s Grocery, then made a stop at the post office. At 11 a.m. we headed into the hot flats leading up to the Burro Mountains. We followed three bobbing umbrellas in the distance, along the highway, and then into the slow growing foothills. It turned out to be three siblings hiking together. We leapfrogged with them  from sign to sign. Our feet were sprouting hot spots and we had to keep stopping for shoes-off breaks and new tape jobs.

At 6 p.m. we got to the Engineer’s Windmill at mile 100.1, and I celebrated by eating some gummy bears. Then we hiked on as the sun set, invigorated by being in mountains with trees. The air was warm and breezy for a while, the light turning violet. 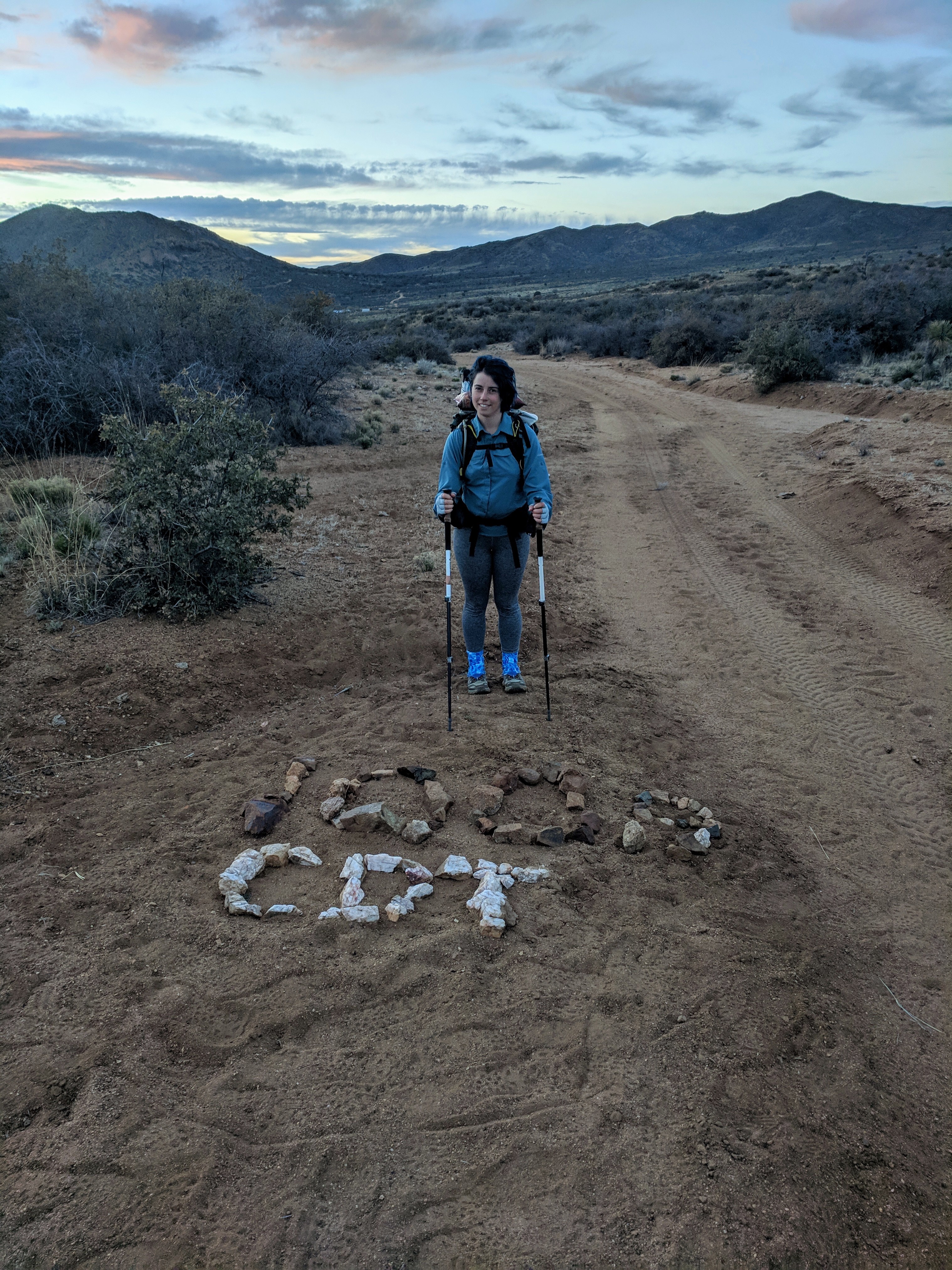 The next day we started off before the sun got over the ridge, and the roads quickly took us up the first ridge. It felt so good to see hills in every direction.

After passing a mysterious pile of colored glass and a row of rusty cans, the dirt road turned into single track!

I can’t even describe how it felt to be on tread that other people have planned and maintained. I heard a lot of the trails in the Burros are taken care of by a local group of horseback riders. A huge thank you to trail crews everywhere!

Josh and I got to Jack’s Peak in the evening, near the golden hour. The sun had been filtering through the pines as we hiked along the ridge, so that the edges of the trees were tinged orange. While looking for water we came across an old metal tank first. It was rusted and its puddle of water was fairly unappetizing. Next we checked out a corrugated round tank, and while Josh climbed on top looking for an opening, I found a concrete box with water just down the hill. We ended up getting water out of that, wondering how deep it was until Josh stuck a trekking pole in and hit bottom two feet down. Not an abyss after all. When I filled my Smartwater bottle I tried not to disturb the small yellow butterfly body, floating on the surface.

I didn’t want to camp near the old concrete foundation pads (kinda creepy), so we hiked down a little way to a saddle with a flat spot down in the pines. We ate and watched the clouds fill in above us, but when we went to bed and started hearing drops on the tent, we both thought it was pine needles. Then we raced out to grab our packs and cover them under the vestibule.

Soon after we heard rolling thunder in the distance.

Our spot looked east onto a big copper mine in a valley, and we watched lightning strike in the distance for a while. I kept counting between flash and boom, and the light was so bright I could keep track with my eyes closed. Awhile later I woke up as the storm got closer. I counted six seconds where it had been 11 before, then three, followed by a deafening, nearly simultaneous strike and thunderclap. The next interval was six seconds. The storm moved on, and I fell asleep again.

I woke up in the middle of the night and realized that when I had pulled my pack into the vestibule and thrown its cover over, I had forgotten something.

When I went to bed I wanted to bring my water filter into the tent in case it froze, but I was too lazy to filter the last liter of water in the bottle. So I left the bottle upright but uncapped in the side pocket of my pack. It had spilled into the pack cover when I rushed to bring it in from the rain. The pack and everything in the outer mesh pocket were completely soaked. Half asleep, I did as much damage control as I could. I hung up my wetted out and dripping rain jacket, hoping it wouldn’t be raining in the morning. Miraculously, my toilet paper was dry.

It drippy and drizzling, and we discovered that the floor of the tent was wet too. Josh and I did our best to pack up all the wet things. He made us a warm drink (Dandy Blend!) which was really good for morale. Even once I started hiking I was cold, and I wore Josh’s dirty second pair of toe socks as mitts. It rained, cleared up, hailed for a while. Eventually I stopped taking my rain gear on and off. We were heading a couple of miles off trail to Ravenswing Farm, and looking forward to drying out and trying out some brews. 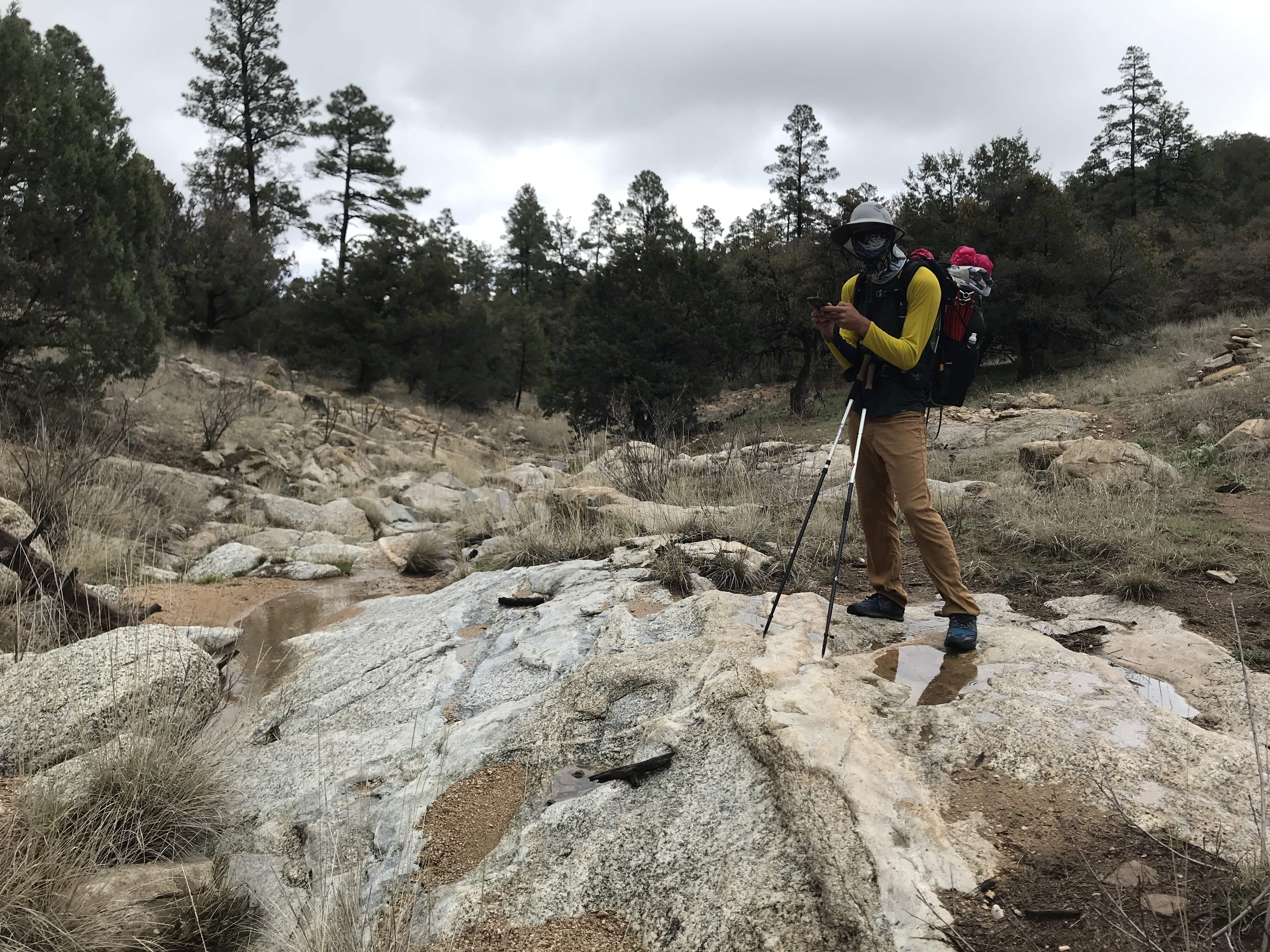 Streams! Josh has been great about leaving comments about water sources on Guthook.

The farm was a perfect break. Page and Gabe, our hosts, were welcoming and generous. They’ve been fermenting and selling kombucha in Silver City for a couple of years, but only recently got a brewery license and started working on beer. This is also the first year they’ve been taking in hikers. I got in some good time petting their dogs. In the morning Gabe made cowboy coffee and gave us a ride back to the trail.

The weather had cleared and the air was cool and fresh from the rain.

Josh and I made miles quickly through the day, except for an extra mile and a half when we walked down the wrong wash. In the correct wash there was even some water trickling down in rivulets through the sand. I was excited about this but then thought I should be extra careful in case I encountered a thirsty snake. Or a hydrated, refreshed, and energized snake.

Josh and I entertained ourselves by talking about what the rock formations looked like.

There were tire tracks in the wide sandy areas, and a couple of beer cans that I picked up. When we got close to the highway we took a long break to rest up for our road walk into Silver City. Hiding in the shade of a steep hillside, we waited out the hot afternoon sun. We lay on our Tyvek eating snacks and ramen and listening to part of a Trail Show episode. 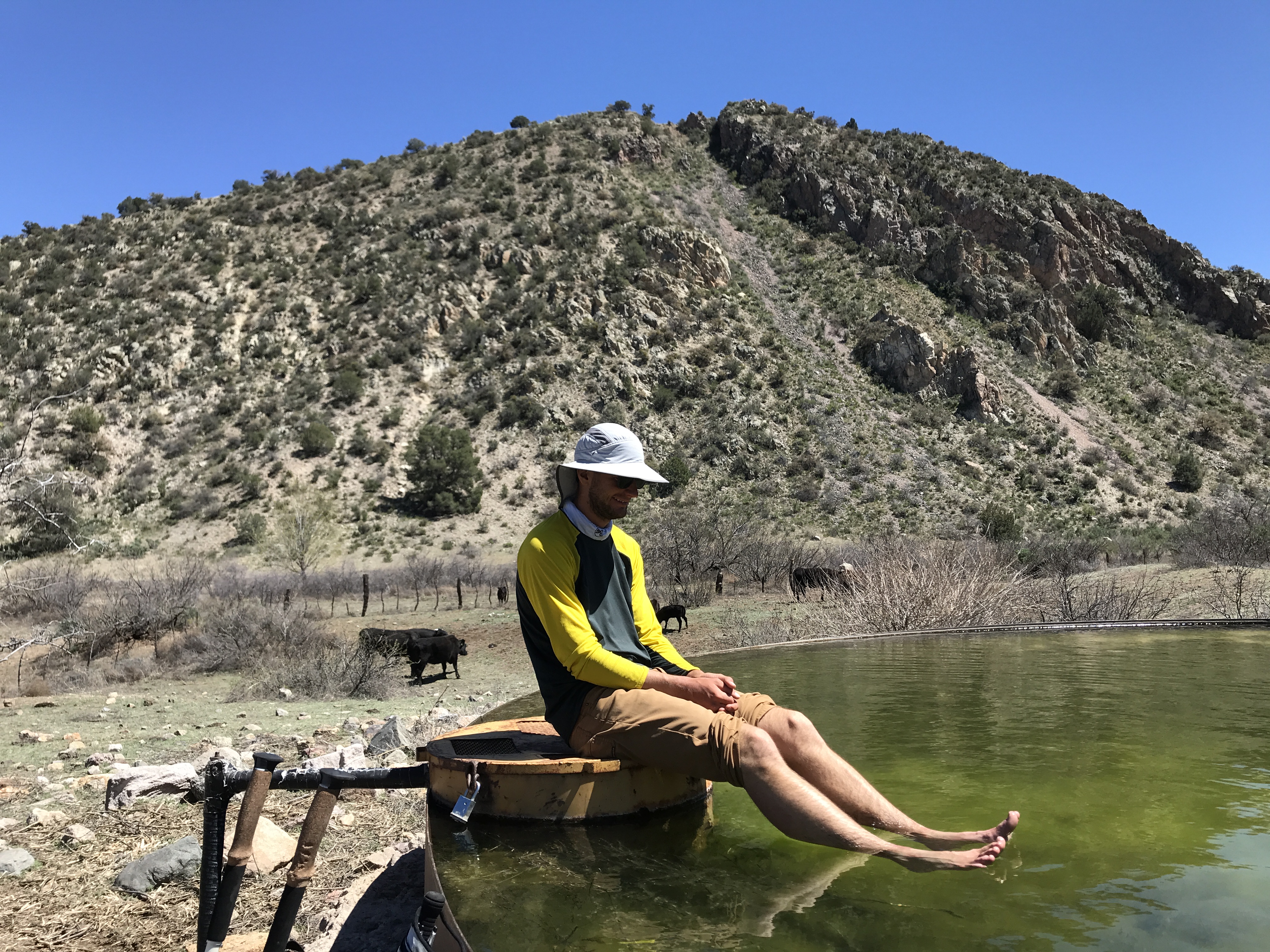 Cameling up on water before the highway. A baby cow got stuck on the other side of the fence from its mama, and whined like a puppy, 30 feet from a gap it could have walked through.

We hiked until sunset and watched the bright moon rise, then stealth-camped and finished the rest in the morning. We got in to Silver City by 10 a.m. As far as trail towns go, this one was really sweet. The folks at Morning Star Sports had gone out of their way to order new shoes for Josh, and they held a replacement buckle for me when I called them on the way out of Lordsburg. We stayed at the Silver City RV Park, and I had a great time petting everyone’s dogs, especially a fat corgi who remembered me each time she saw me. Happy hour at the Toad Creek Brewery hit the spot, too.