Climbing Out of the Gila: Road to Pie Town

There is nowhere else on earth that I would rather be than thru-hiking. That doesn’t mean every step is pleasurable or fun. Road walks to Pie Town give a powerful mirror to the self. Strategies for the San Juans are churning on everyone’s mind. As far as they are still, every step brings them closer. Here’s how the hike is going.

I left Doc Campbell’s late in the day and made it to some campgrounds right before the Gila Cliff Dwellings. Still wrestling with my hike from last year, I decided not to push on. I didn’t see the dwellings last year and I really wanted to. Ended up at a campground right in front of the dwellings.

Hit the dwellings as soon as they opened. I hiked up faster than the guide so I walked through alone. The first glimpse was stunning, and walking through them was magical. Older than most things I know of in America, the acoustics were amazing in the cave. I wonder how much singing was a part of any peoples who lived there. 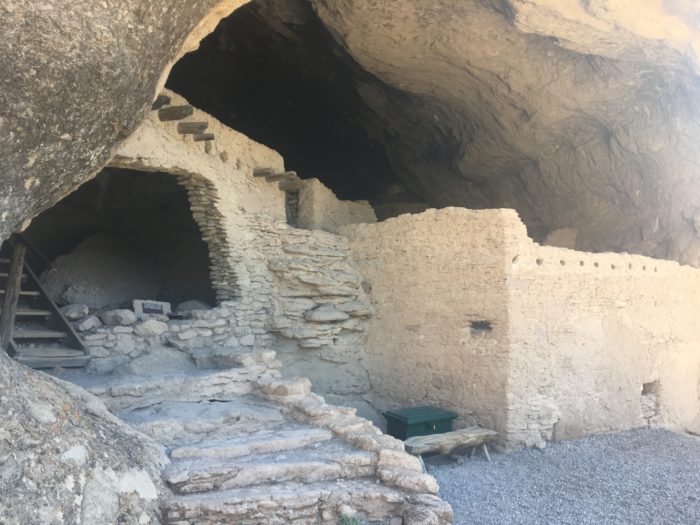 Left the dwellings and did a Ley alternate that cut off some miles before dropping back down to the river. Made it to Jordan Hot Springs early afternoon. Soaked for a while with a couple from Albuquerque who were really nice. Had a snake join us for a spell. 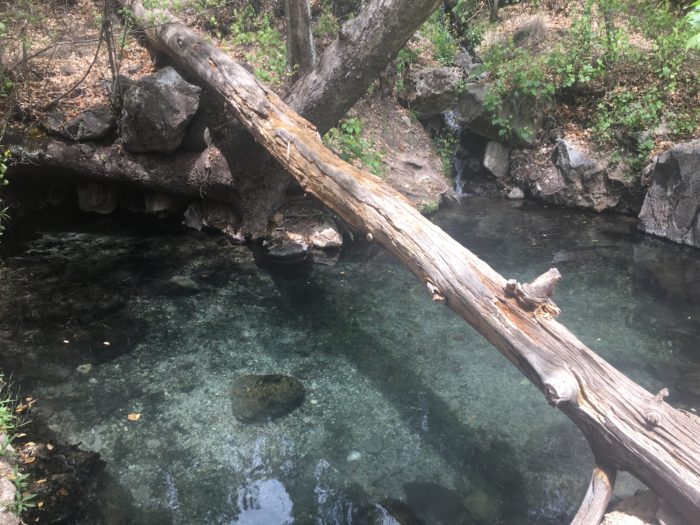 Walked along the river after and was wrestling with my previous hike. I had kept in step with him so far and a part of me wanted to outpace him. While also being more embodied and empowered. I reached a junction where I could get back onto the high route, which I took last year. The high route is a shorter and easier track so it is quicker. I consciously decided to stay on the river route so I could physically differentiate between the two hikes.

I saw Link and Perrier where I stopped for dinner. They set up camp and I hung with them for a bit before pushing on. I made it to a spot that had a nice pool. Took a dunk, which was cool and cleansing, and went to bed pretty immediately.

Woke up and pushed out along the Gila for the day. I didn’t see another person until the late afternoon. Crossing the river around 100 times, the day was slow. Sloshing through the water up to waist deep with heavy, wet feet. Losing the trail and taking time to find it again.

There was also something about the water of the Gila or dunking and drying my legs all day. I had a rash form on my calves that other hikers have had as well. It was sunburn level of pain.

I made it to another junction of the high route and set up for dinner. Twig and Relentless showed up, and it was good to see them again. I jumped on the high route and climbed out of the Gila to a pass that I camped at. Fell asleep to a beautiful view.

Woke up and got out. Passed a campsite with a pit toilet, which is pretty luxurious compared with what I’m used to. I was out of the Gila but now it was road walks for a good few days. Plugged into music as I had the intention to put miles beneath my feet today. I hadn’t listened to anything on the Gila as the trail was too interesting. But now on roads, music and podcasts really help pass the time.

Caught Twig and Relentless and hiked with them for a bit. Outpaced then on a section of trail that was hard to follow. They caught me at a pond that was the last reliable water for 20 miles. Filled up and pushed on. Leapfrogged with Twig throughout the day but I was ahead in the afternoon. Saw two figures I thought were mirages until I caught up to them. It was Eric and Andrew, who I met at Doc’s.

I had my first blister as Twig and I pushed on to a site farther that had water. I might have pushed on but I want to break my mold of camping alone. We were also on an access road with lots of traffic and I was conscious of the fact that I, as a man, would not be afraid camping by myself in the presence of other folks, specifically non thru-hikers.

Twig left as I was packing up. Eric caught me as I was leaving camp and we walked together to a spring that was going to be the last reliable source for 22 miles. Relentless and Andrew caught us and we hung out for a bit. I pushed on to where there was some service and hung out there for a bit. 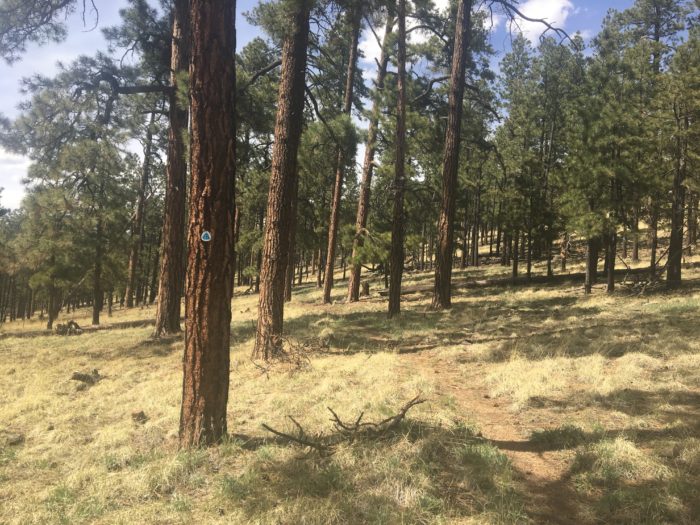 Got back on the official route. Seeing the plaques again felt great but it still was a hard day. It was single-track trail for most of the day, but it was mountainous terrain. A lot of climbing, as well as the second consecutive day of a 20-mile water carry. Plugged in some, unplugged for a lot of the day. 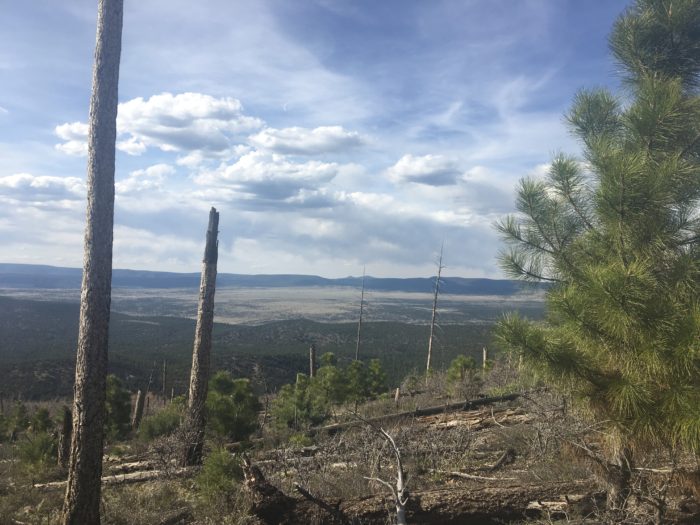 Every step I was wrestling with every painful moment of my life. Tearing apart every crappy decision made out of fear and every moment lived in it.

It’s what I love about thru-hiking. I can be with the experience, and let it have what it needs. I can have the tantrum. I can scream into the sky, curse the universe, curse myself, fall to my knees with tears in my eyes. The mountain isn’t disturbed by me. The mountain hears me, holds my experience.

Then the mountain says, “That’s cool, friend. I’m glad you’re experiencing that. Here’s six miles till water with two 800-foot climbs for you. And none of that energy you just expressed did anything to move you toward it. So what are you gonna do now?”

I don’t have to worry about upsetting any other person. There is only my self and the mountain. I can be this uninterrupted self, experiencing all these things while being held by the immensity of nature.

I didn’t make it to the tank that I was planning on getting to. Stopped four miles before the tank before deciding to throw my stuff down for the evening. Relentless rolled in and we went to bed, tired and dehydrated.

Woke up early and pushed to the tank. I was really dehydrated and wasn’t in the best mind-set. Quite intimidated by the day I had set ahead of me. A 32-mile day to Davila Ranch where there was power, water, showers, laundry. It was road walks the whole day, with a large climb to a fire tower in the middle of the day.

Hiked with Relentless for the morning. Talked about the mysteries of human nature and the secrets of the universe. I outpaced him on the climb to the tower and I stopped there for a spell to check it out. Relentless continued on. 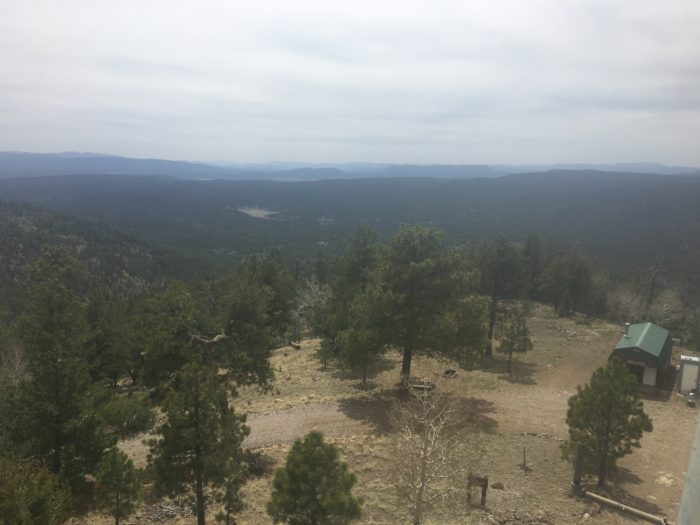 Pushed along the road until the ranch. My feet were sore, I was dehydrated, hungry, and tired. There was a good collection of folks. Most I met at Trail Days. Took a lovely shower, ate some wonderful eggs and some soda, and we had a fire. I fell asleep with gratitude flowing through every inch of my body. I had been in an extreme situation and only by my will alone did I pull myself out of it. 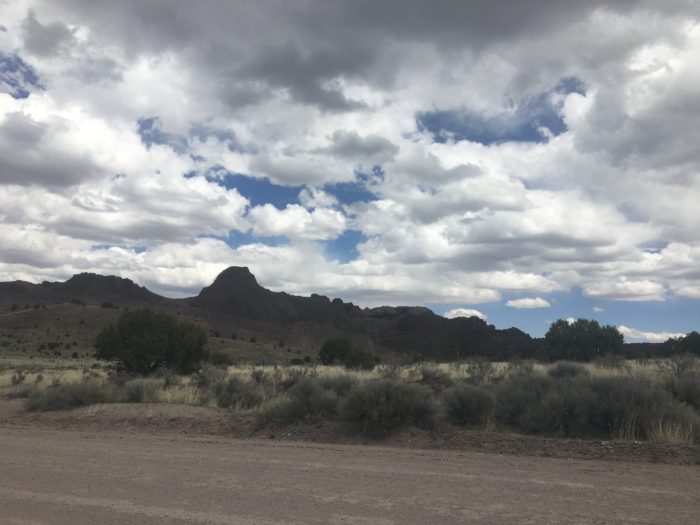