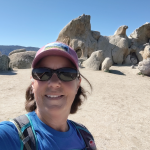 The Winds Have It – Part Two

From our experience hiking in the Sierras, if you want a relatively snow free trail experience, it is generally better to not enter the Sierras “too early”. Not being particularly familiar with the Wind River Range, we figured we’d apply the same “formula” to The Winds as well.  How bad can it be in early July? The answer. Luckily we are adept in the snow.

We had more than enough of the Pole Creek Trail, and did not look forward to re-tracing our steps, uphill, with full packs, to rejoin the CDT. I was also a bit leery of having to go up an over Lester Pass at 11,115 ft. My fall coming off our last pass before Pinedale, was still fresh in my mind. Surely it would be covered in snow on its approach and descent. We decided instead to take an alternate route back to the CDT. Starting from the Elkhart Trail Head, we would take a tolerable portion of the Pole Creek Trail to the Seneca Lake Trail. This 10 mile alternate would be our ticket back to the CDT. With 6 days of food stuffed into our packs (if we were younger it would have only been 4), and a hired ride from the GOTCO shuttle service, we hit the trail.

Considering we had a late start and would be hiking uphill with full packs, we decided that 10 miles would be the goal for the day. We did 12.7. Apparently we are getting stronger and faster. The Seneca Lake Trail was pleasant and scenic. Plenty of places to pack in for a long weekend or an epic fishing trip. We made a note of places to revisit. 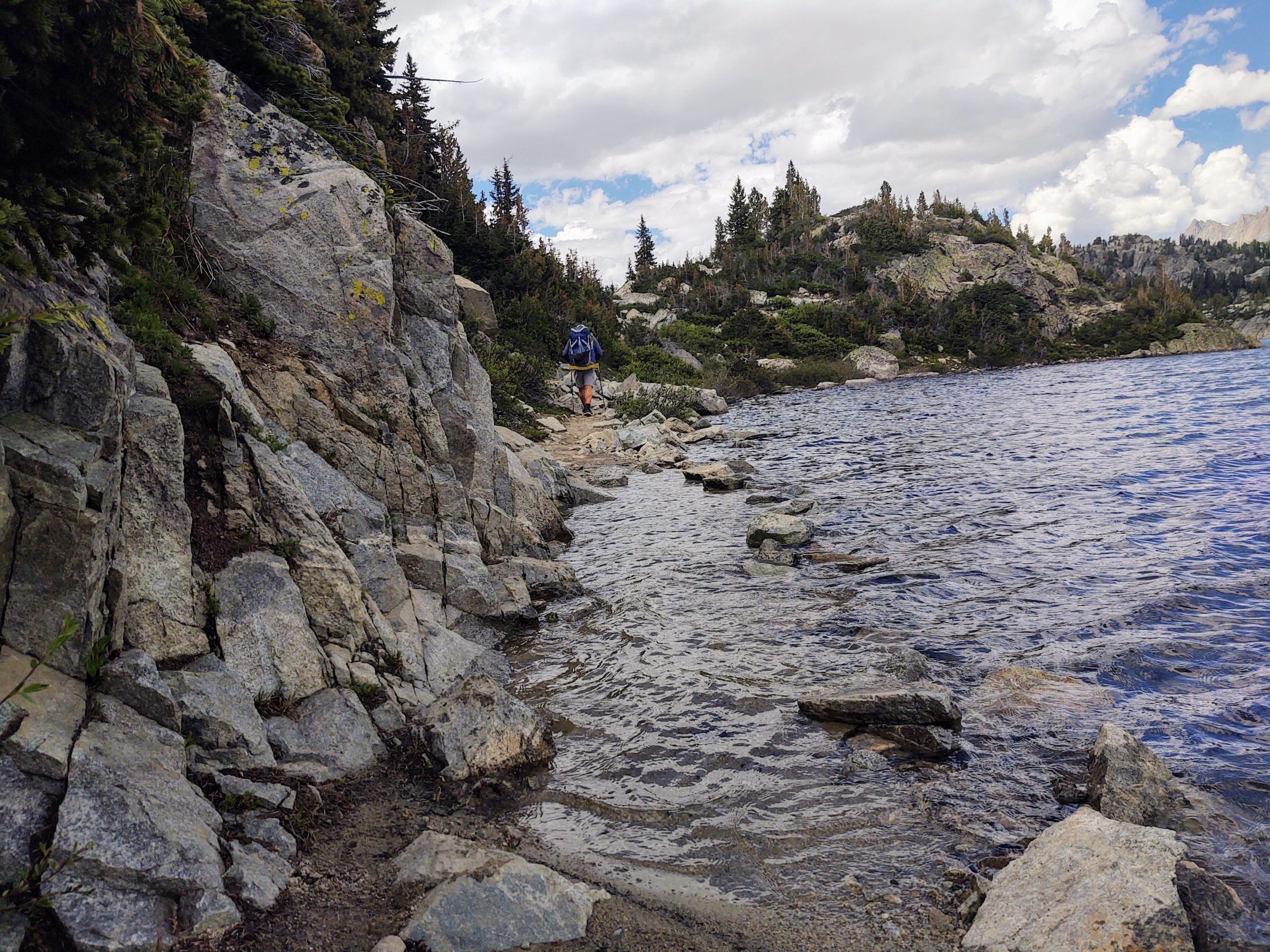 Once we hit Seneca Lake, we discovered that it must have been “high tide”, and just like that our feet were sopping wet again. It took two days, as it was, just to undo the “wrinkles” in our feet from the previous week. Seneca Lake led to Little Seneca Lake and soon we were at the Knapsack Col Alternate route (NOBO mile 1799.9). 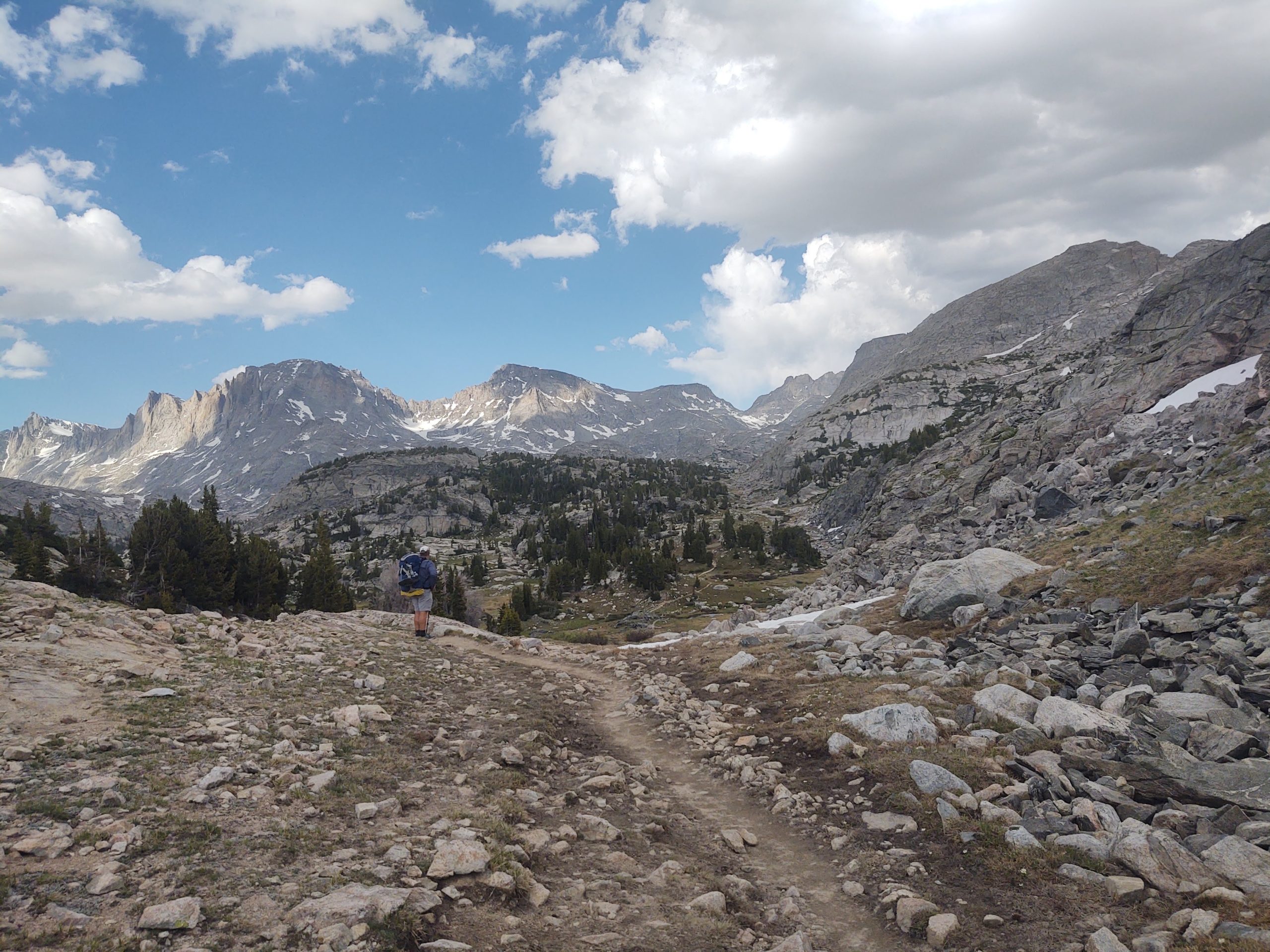 Its jagged relief loomed before us. No alternate for us, was the decision. Happy with our amazing progress, we found a flat piece of property “lakeside” to an unnamed body of water, and called it. Devoid of mosquitoes, we dined on foot-long Subway sandwiches we had carried from town and Orange Crush powder packets, added to our water.

We were thankful that Fremont Creek, which resembled a raging river, had a bridge. If not, we would have had to turn around and head back to Pinedale. It was that swift and dangerous at the time. Just past the bridge, we spied an object loping towards us. It was a hiker with an obvious thru-hiker pack.

We had been following a lone set of Altra LonePeak 4.5 footprints for miles and days. Could this be him (they were large prints) retracing his steps due to impassable terrain? When we crossed paths, we couldn’t help but stop to talk. He was not the thru-hiker we had been “following”, but he was Flip-Flop hiking this section of the CDT. His trail name was, Feral…as in cat. He had also, due to COVID, started in Rawlins. 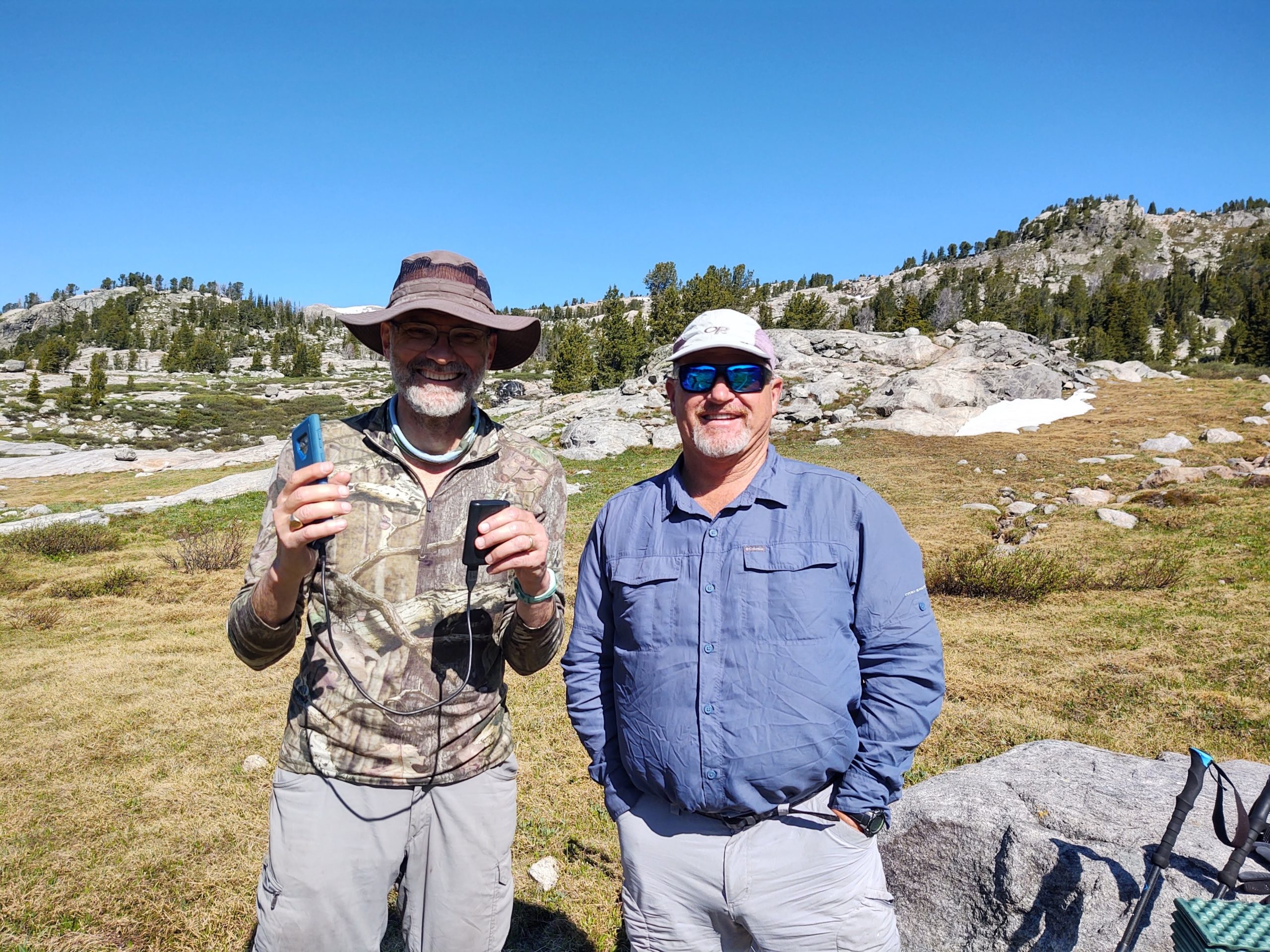 He gave us “good” intel on what we had to look forward to just past Lower Jean Lake.

” You got a little bit of uphill coming up here after Lower Jean Lake, with some snow, but it’s not bad. There’s only one place I could have used micro-spikes, but I worked around it.”

His statement, in true thru-hiker fashion, was highly understated. 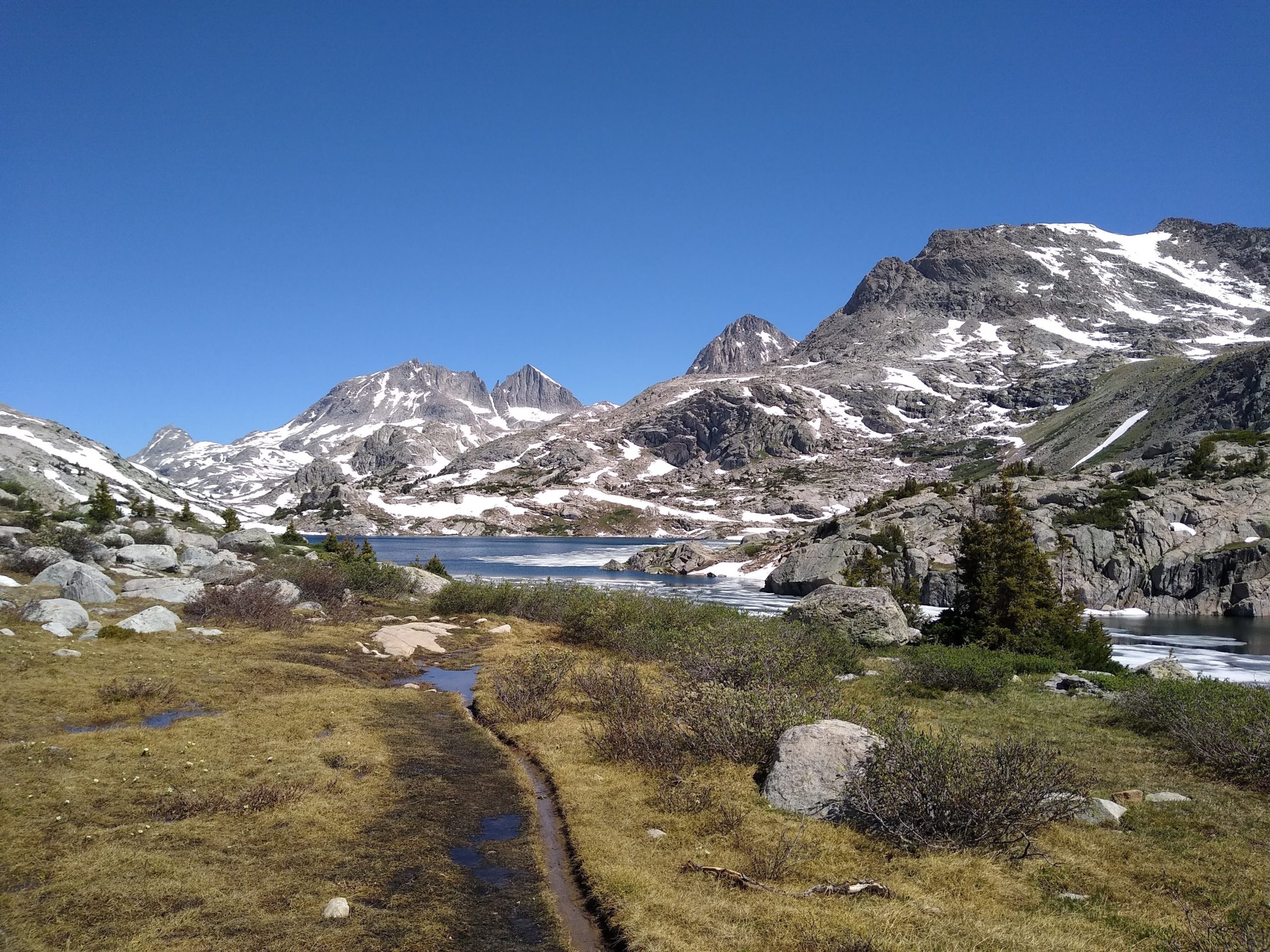 From whence we left him, became THE most BRUTIFUL day ever! 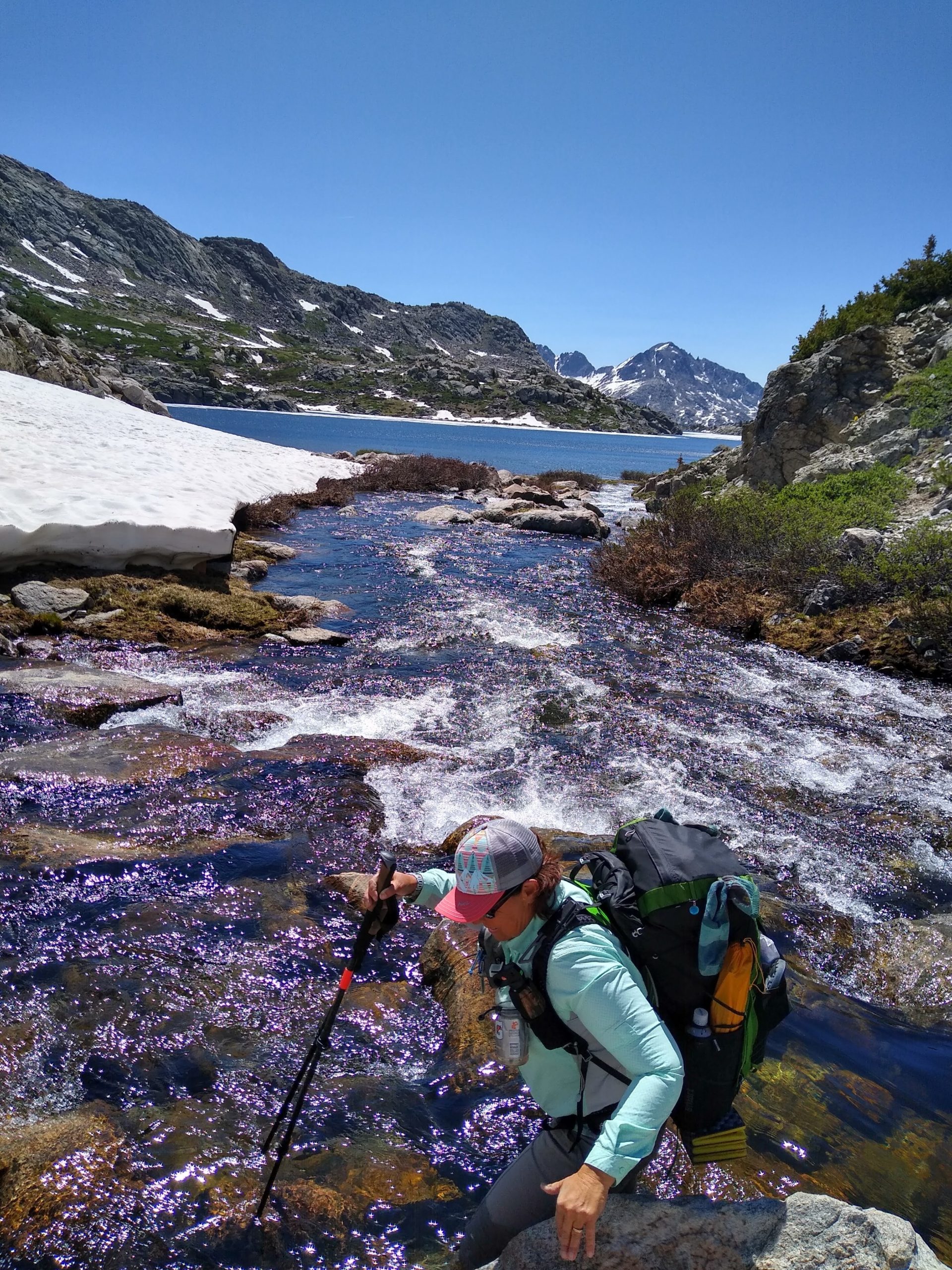 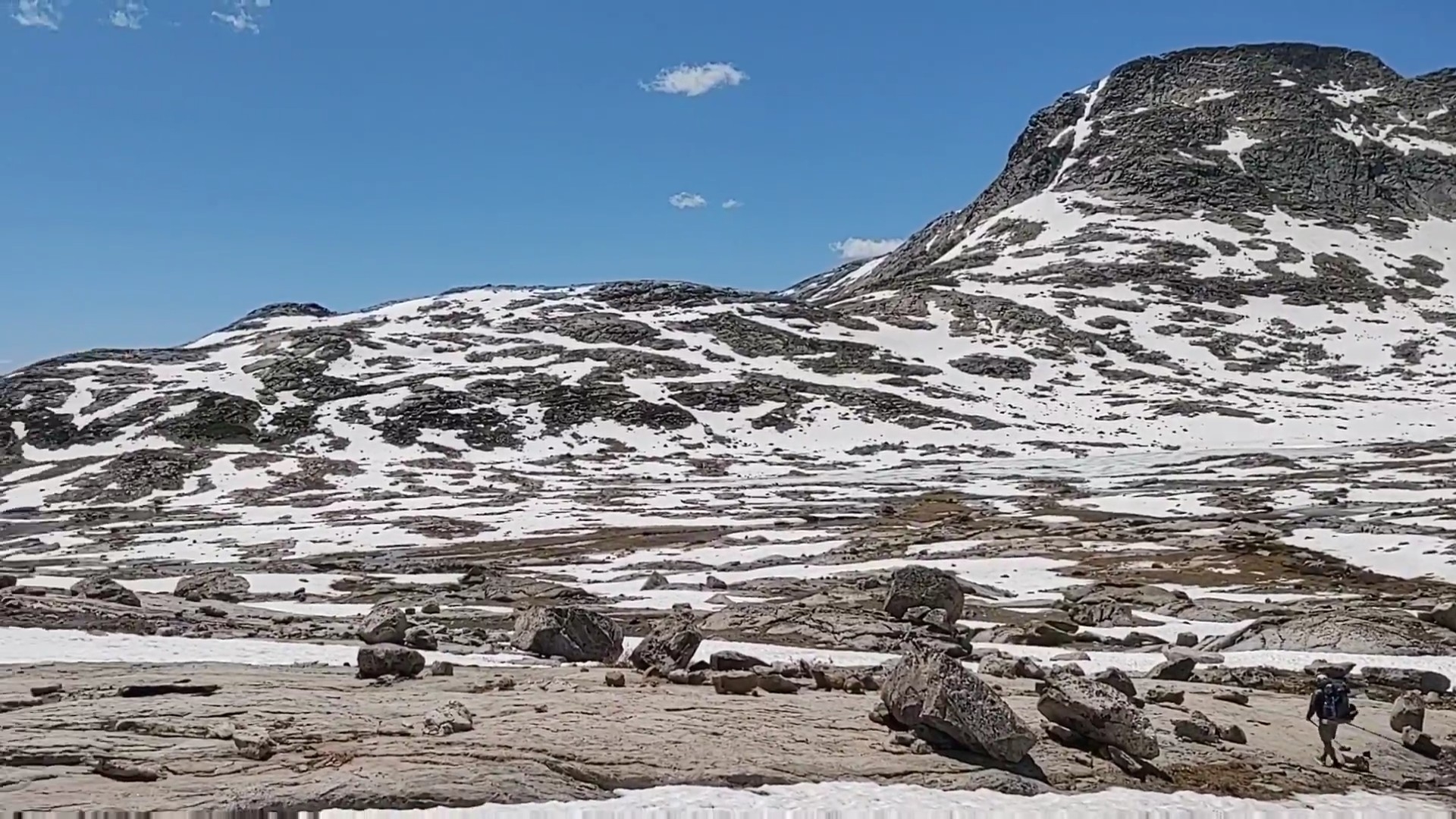 A snail’s pace, Fremont Creek’s inception crossing (thigh deep – 3 times, at a chilling 43 degrees), and route finding up to and over 11,603 feet took ALL DAY. We passed two people fly fishing on Elbow Lake, standing in calf deep snow on the “shore”. Huh? 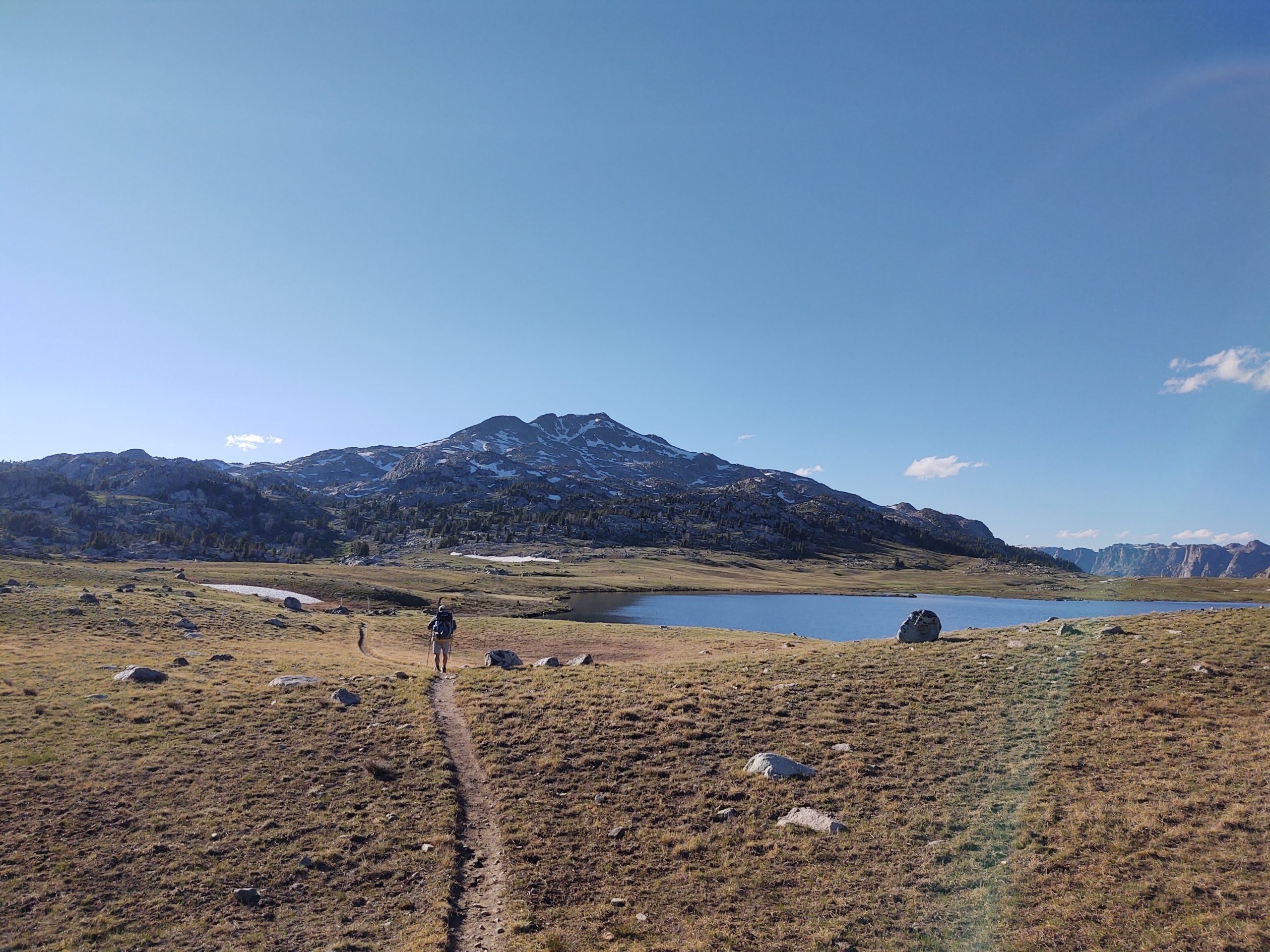 By the time we reached Summit Lake, where we thought we would be taking lunch, it was dinner time, and we were wrecked. 10 miles was our day. We earned every bit of it. 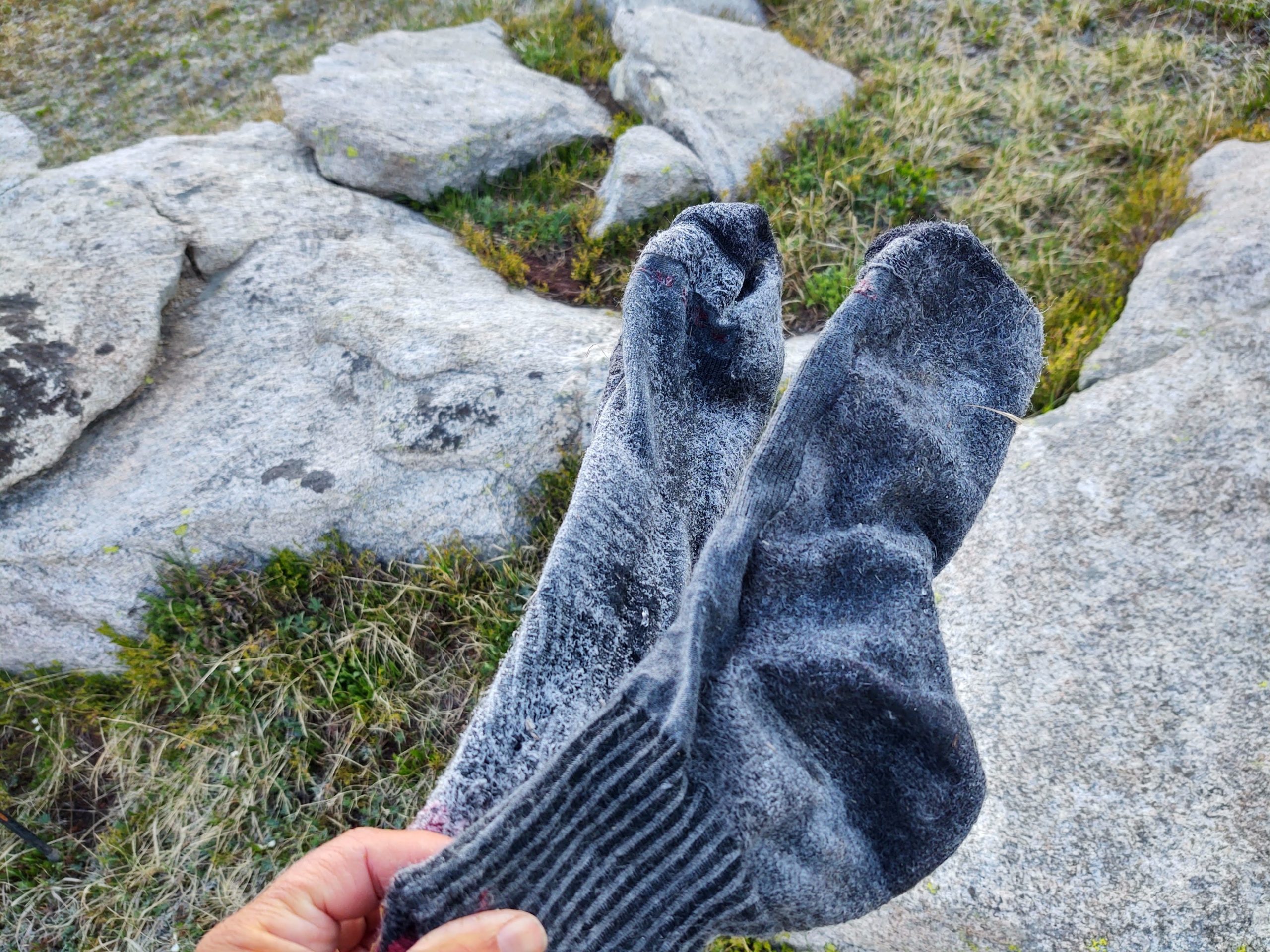 Will it ever warm up?, we thought, as we discovered frozen socks and our similarly frozen shoes upon waking. What are the chances our feet stay dry? In the upwards of ZERO percent, we agreed. It was, the CDT after all. In keeping with CDT “tradition”, we had learned to “embrace the suck”…as best we could. Gallows humor was a constant on this trail. 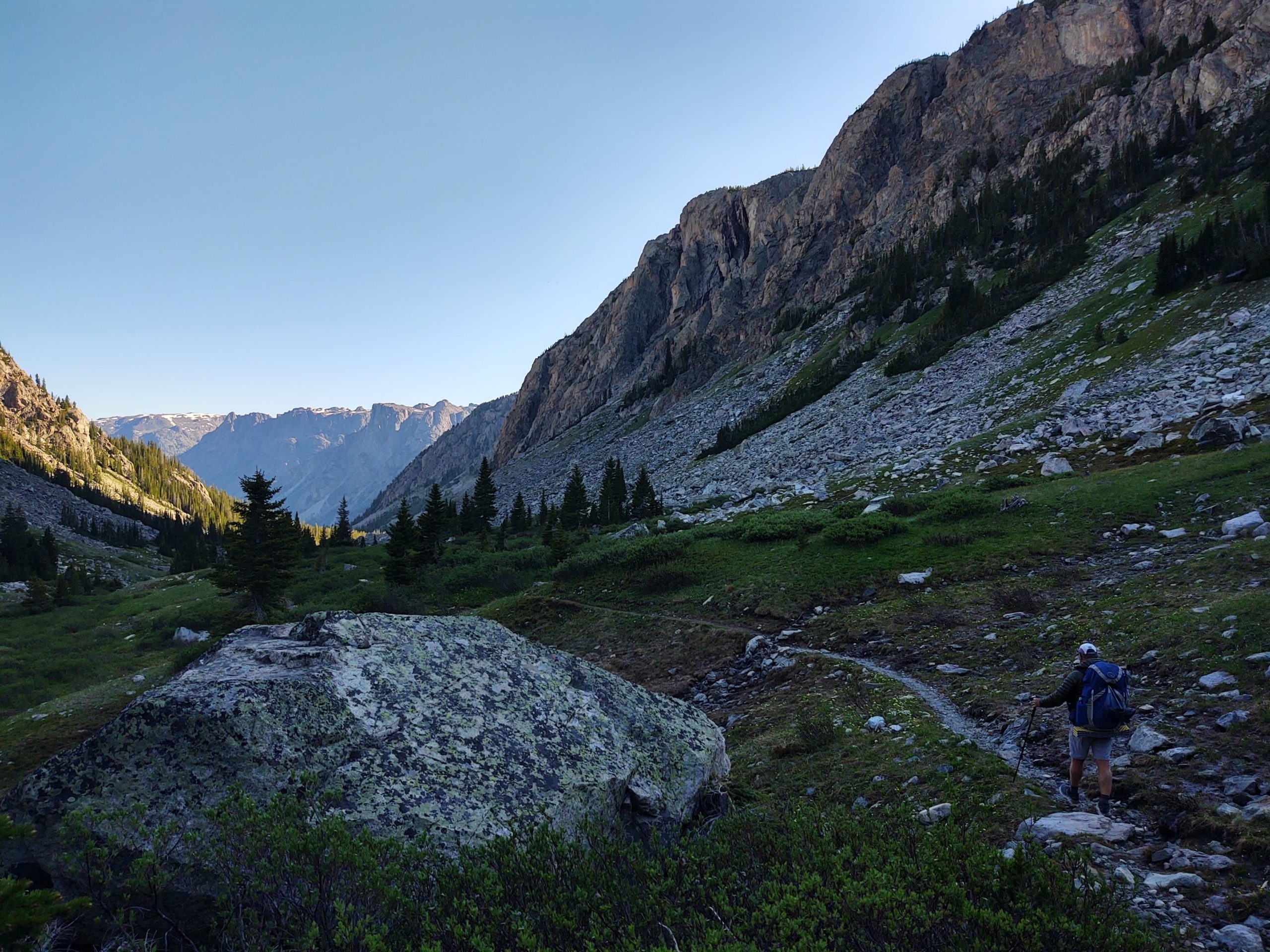 Once we had sufficiently “softened” our frozen solid socks, and pounded our similarly frozen shoes into submission, against nearby boulders, we got to walking. Today was a treat of sorts, as it was mostly downhill. Rock littered trail soon turned into pleasantly wooded trail, which became the norm for the day. 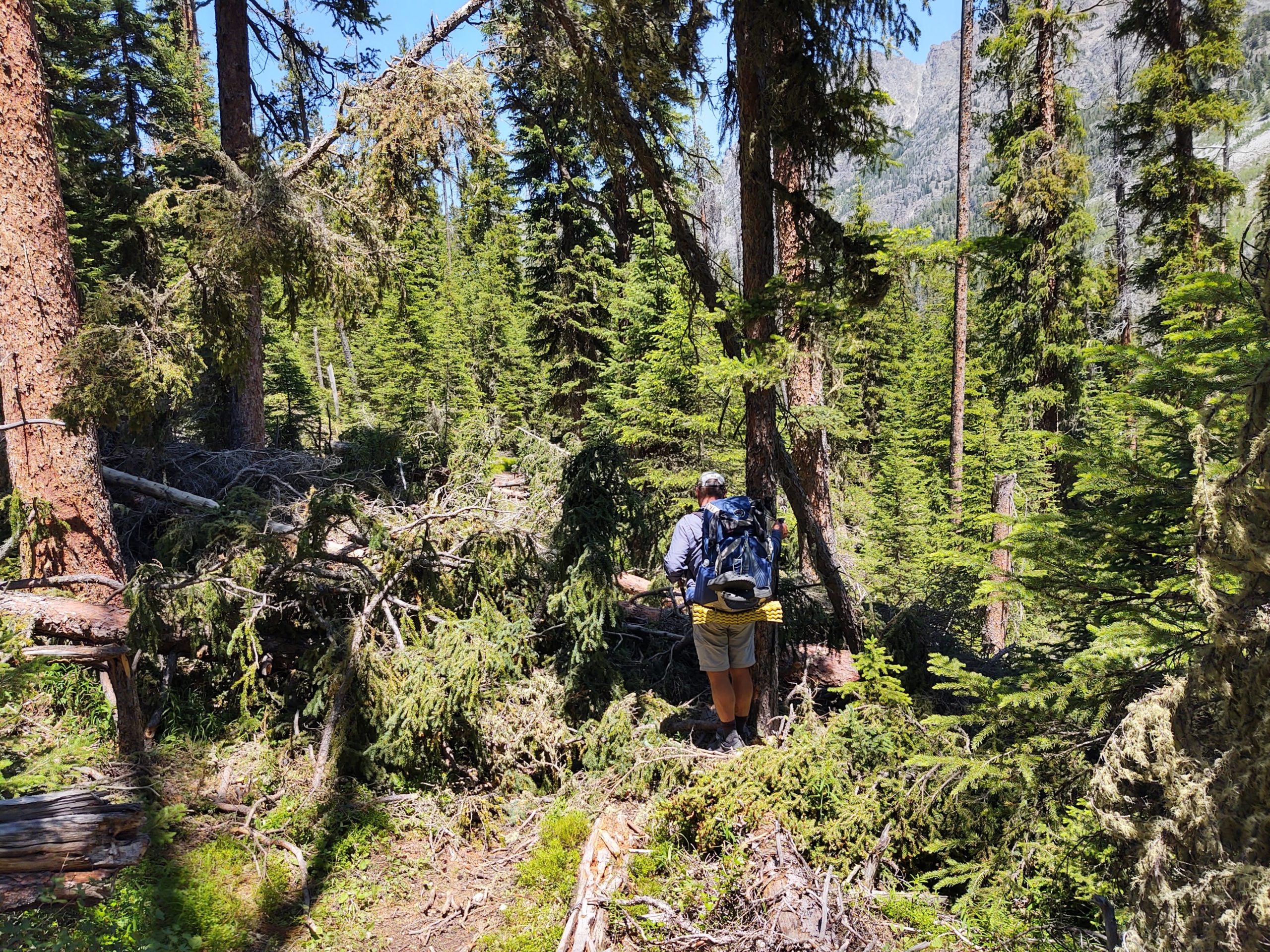 Towards the end of our descent, we were besotted by a plethora of tangled blow-downs. This made for ridiculous impromptu “parkour” reroutes, and went on for 3-4 miles. 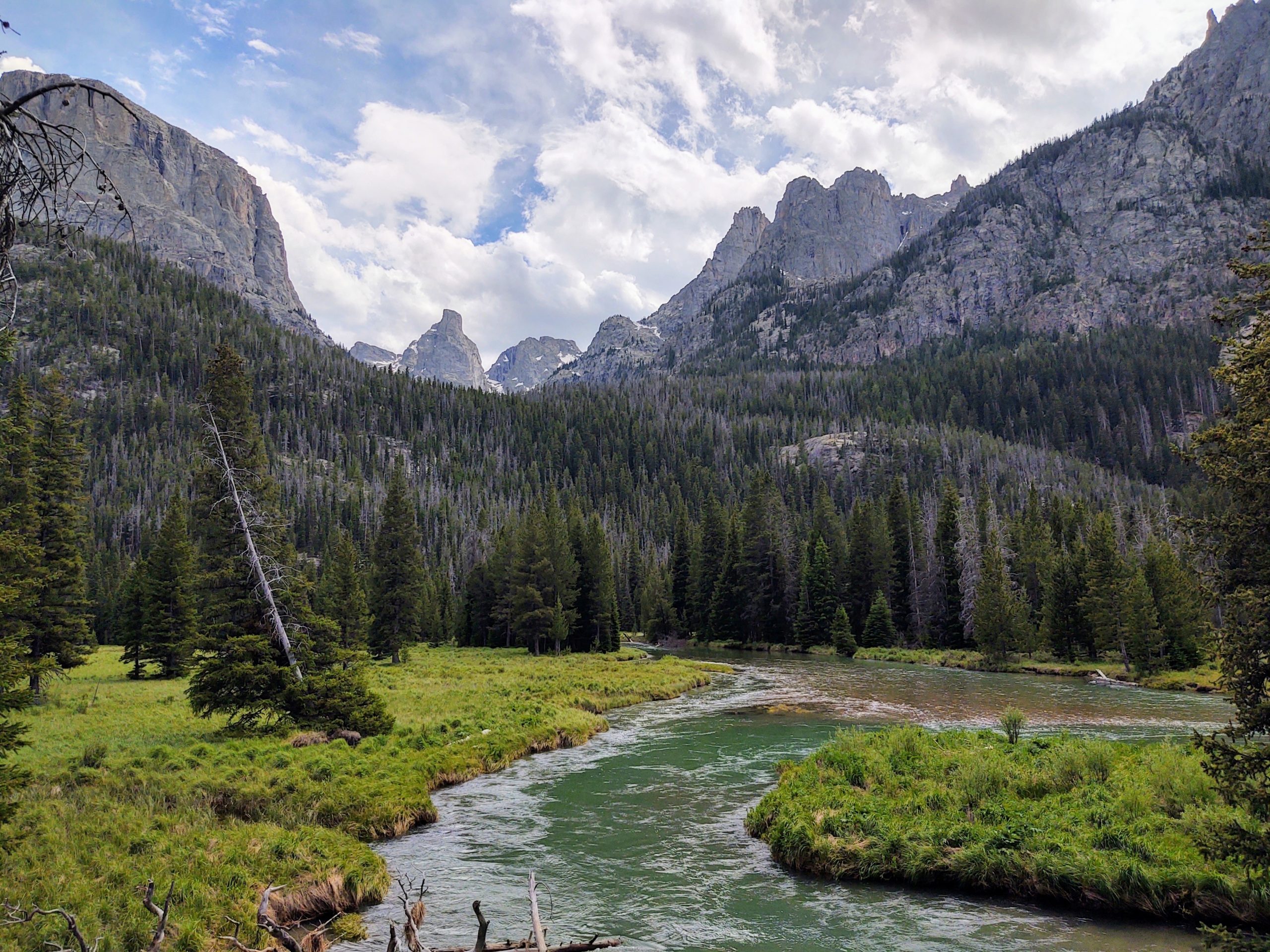 However, once we arrived on the narrow valley floor, we entered a ribbon of enchantment that gave rise to a thought that we had been there before. It’s not that we had ever visited, let alone known about the aptly named Green River, or its two massive and inviting lakes. 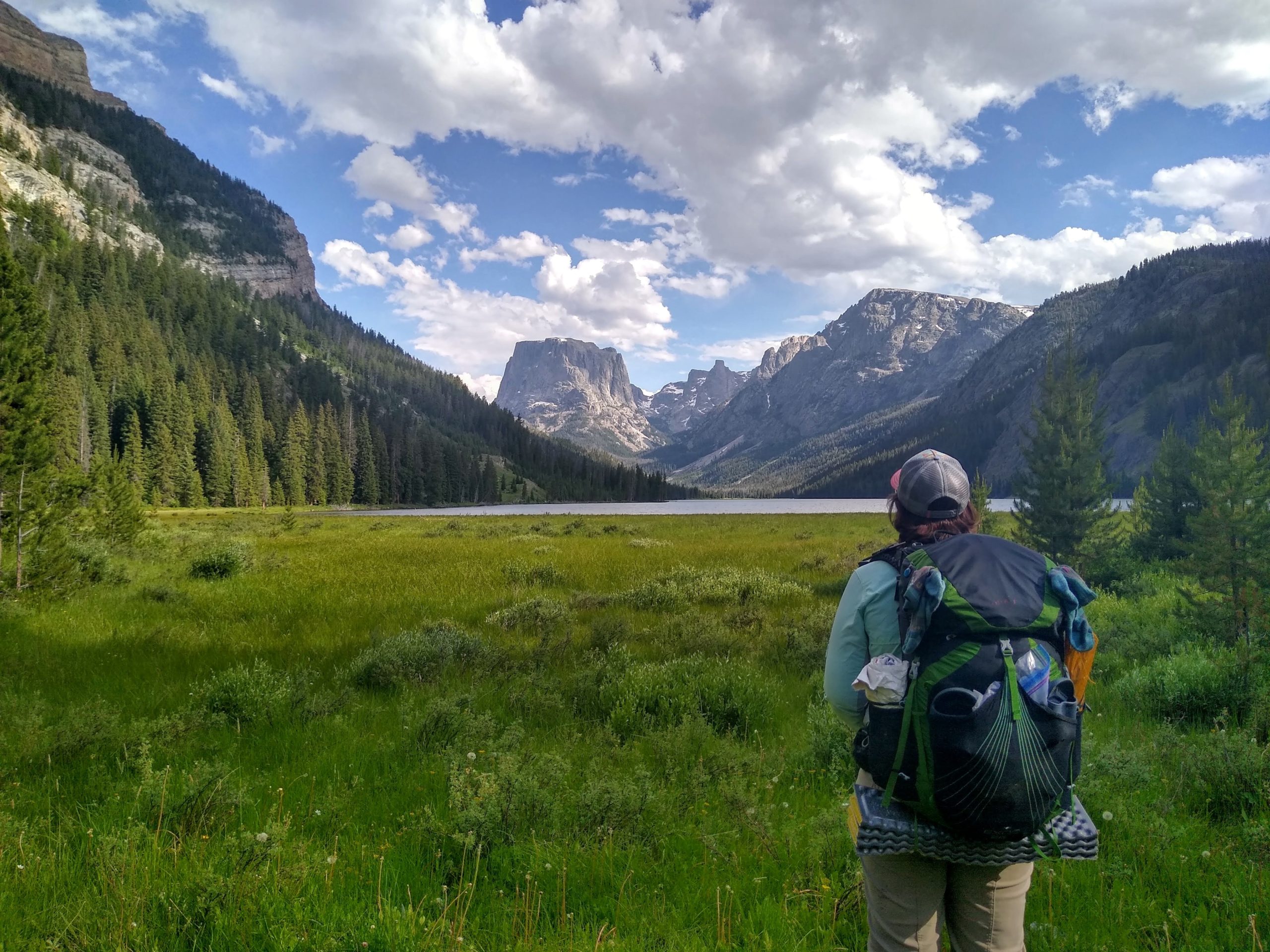 Our day ended, camped at the end of Upper Green River Lake, next to an abandoned cabin, and our first wildlife sighting…a moose.

Every morning, without fail, seems to begin with an uphill. A nearly 2,200 ft, 8 mile continuous ascent to Gun Sight Pass (10,135 ft) occupied our morning. Scatterings of pronghorn and deer entertained us as we made our way , first, through low sage brush and flowering wildflowers, and then through inlets of dense pines and groves of *familial Aspens. 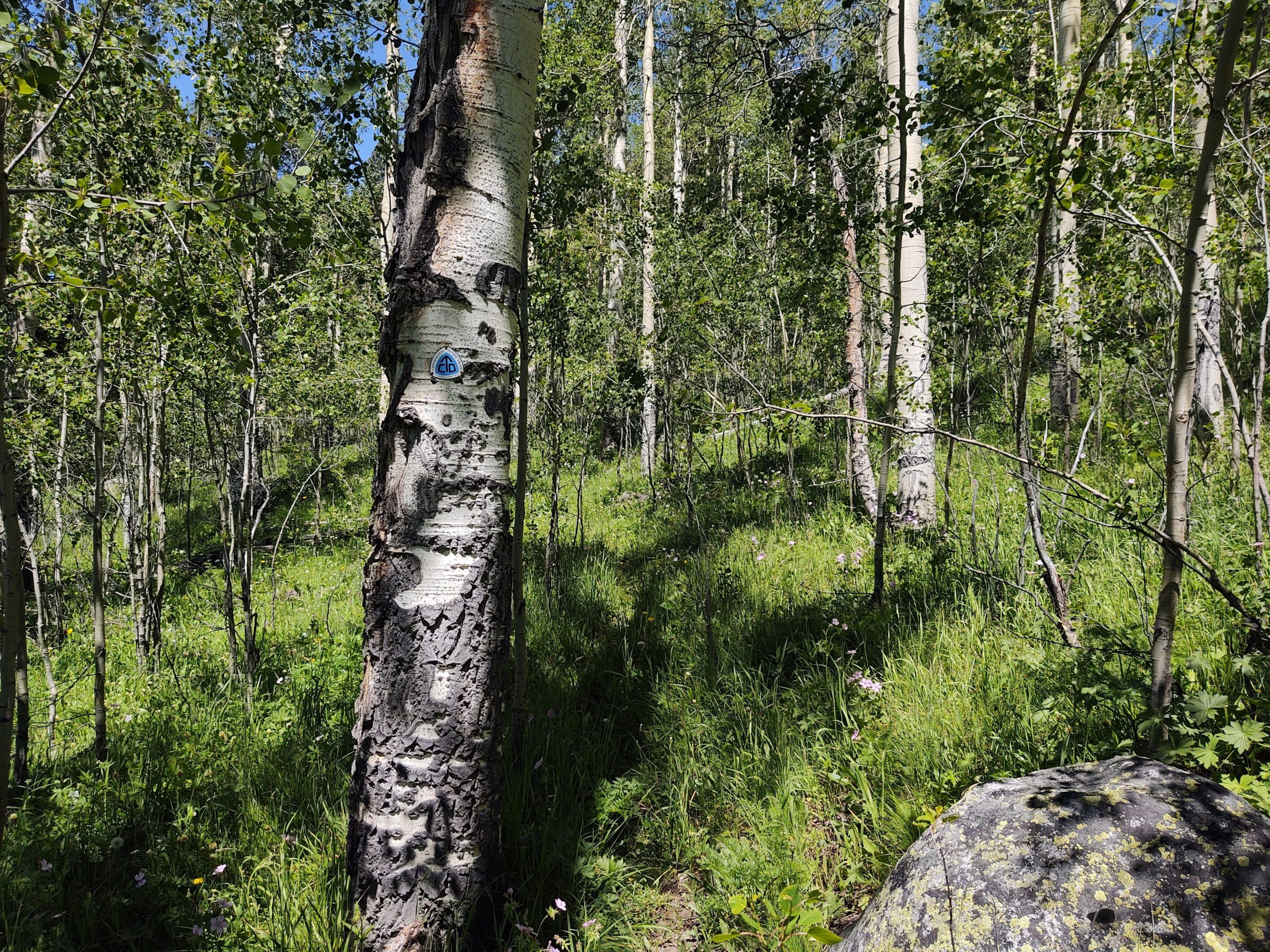 (*Fun fact: Aspen groves are connected by one root system. Their roots only go as deep as 12 inches, and extend outward whereupon, suckers (actual name) shoot off from the roots and emerge as new saplings, growing into full Aspens. A tapestry of interconnection.)

We reached Gun Sight Pass with our lungs and calves burning. To view where we have been and where we are headed, is mind blowing. It often feels like a “lifetime” ago. This time was no exception. Our rocky, mountainous, and snowy terrain was no more. 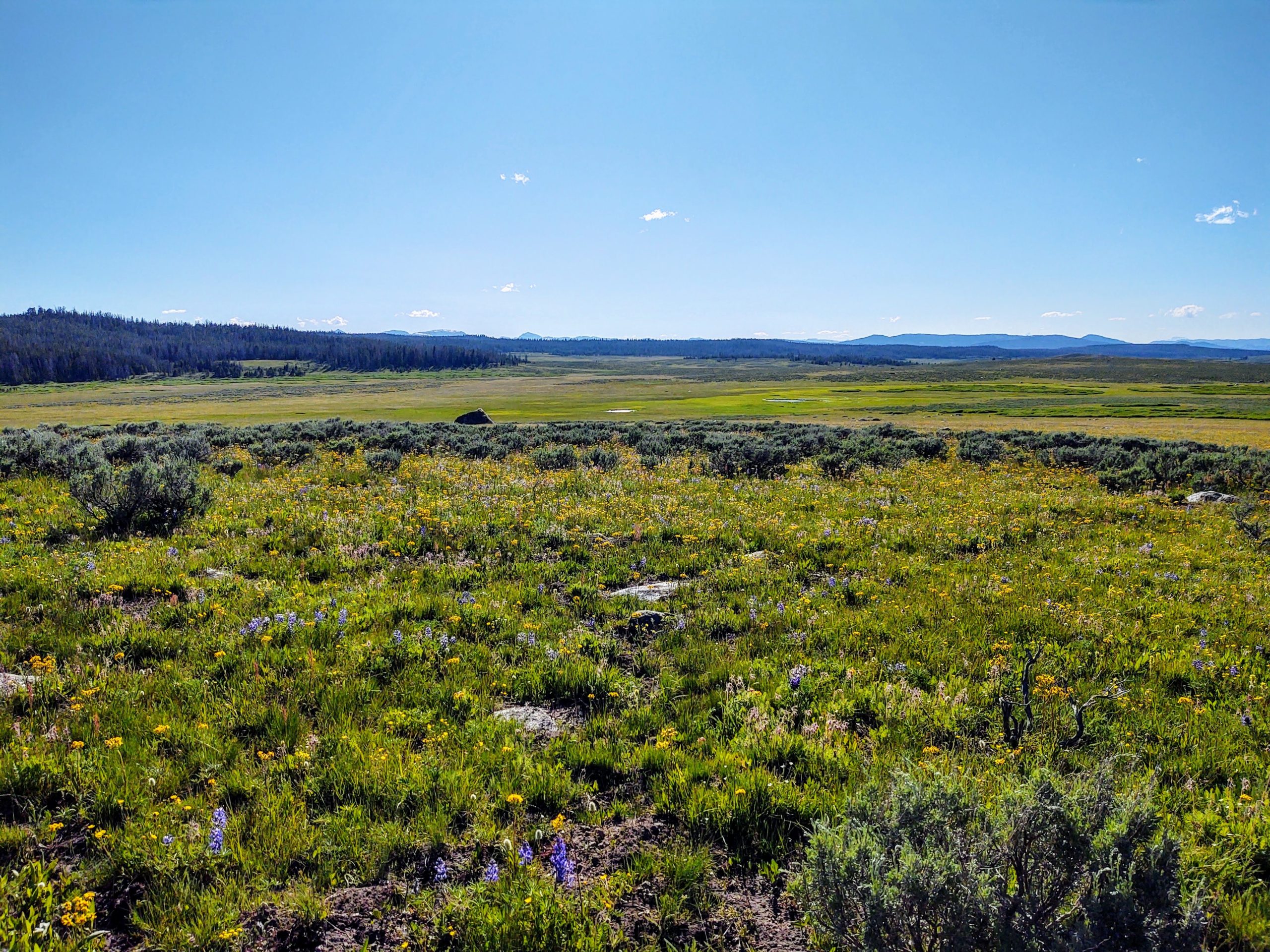 We would however, NOT get away with keeping our feet/shoes dry for the day. An early evening river crossing would not allow it. We did however discover a wolf print in the mud, that added an “edge” to a mostly benign and wonderfully pleasant day.

Rolling fields of brightly colored wild flowers stretched as far as the eye could see. The “Sound of Music” played in my head. 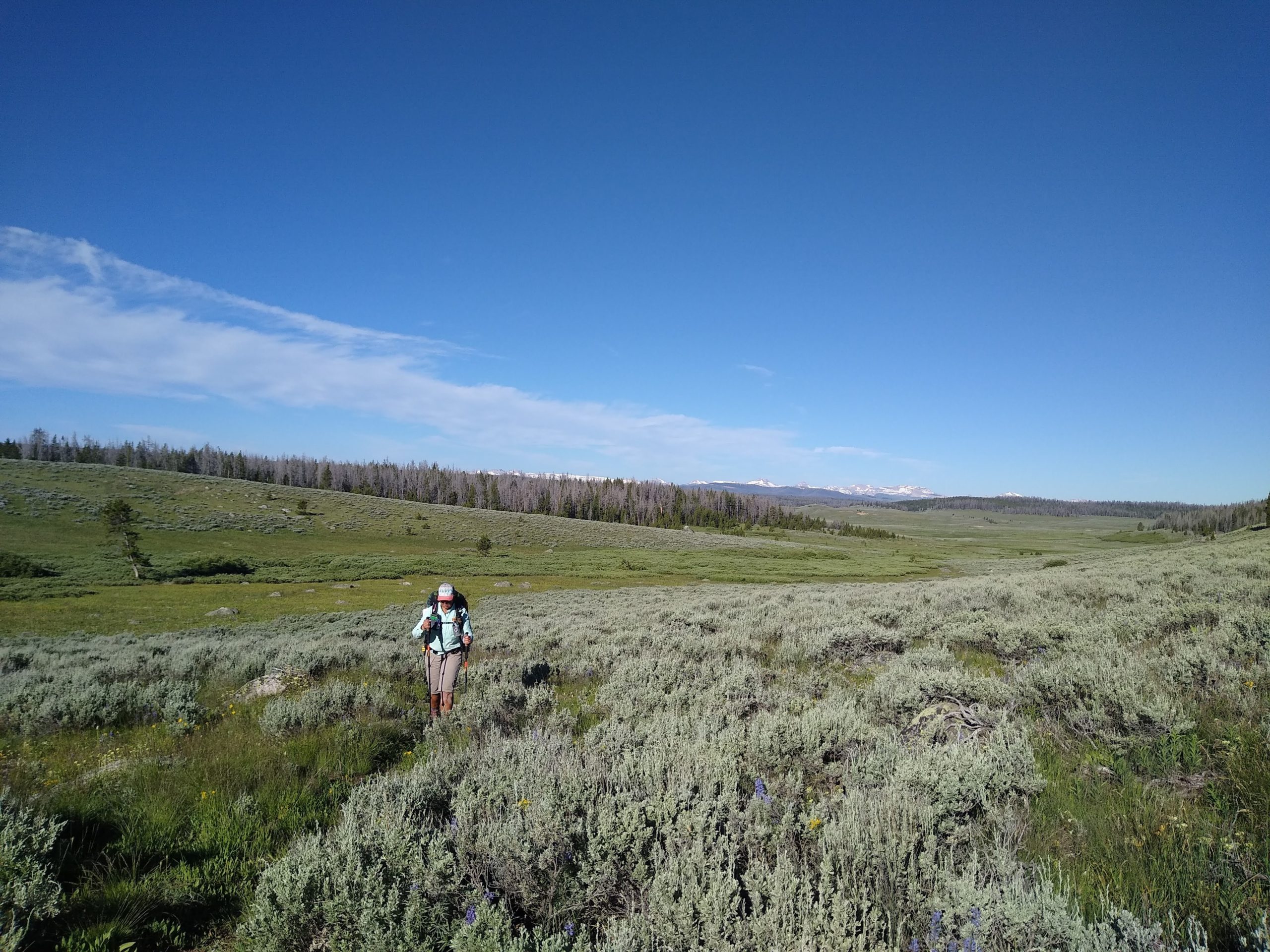 We wove our way through chaparral and forested areas that eventually led around the shore of the seemingly never ending Lake of the Woods, whose “leaky” shoreline created an oozy bog for us to dance through. 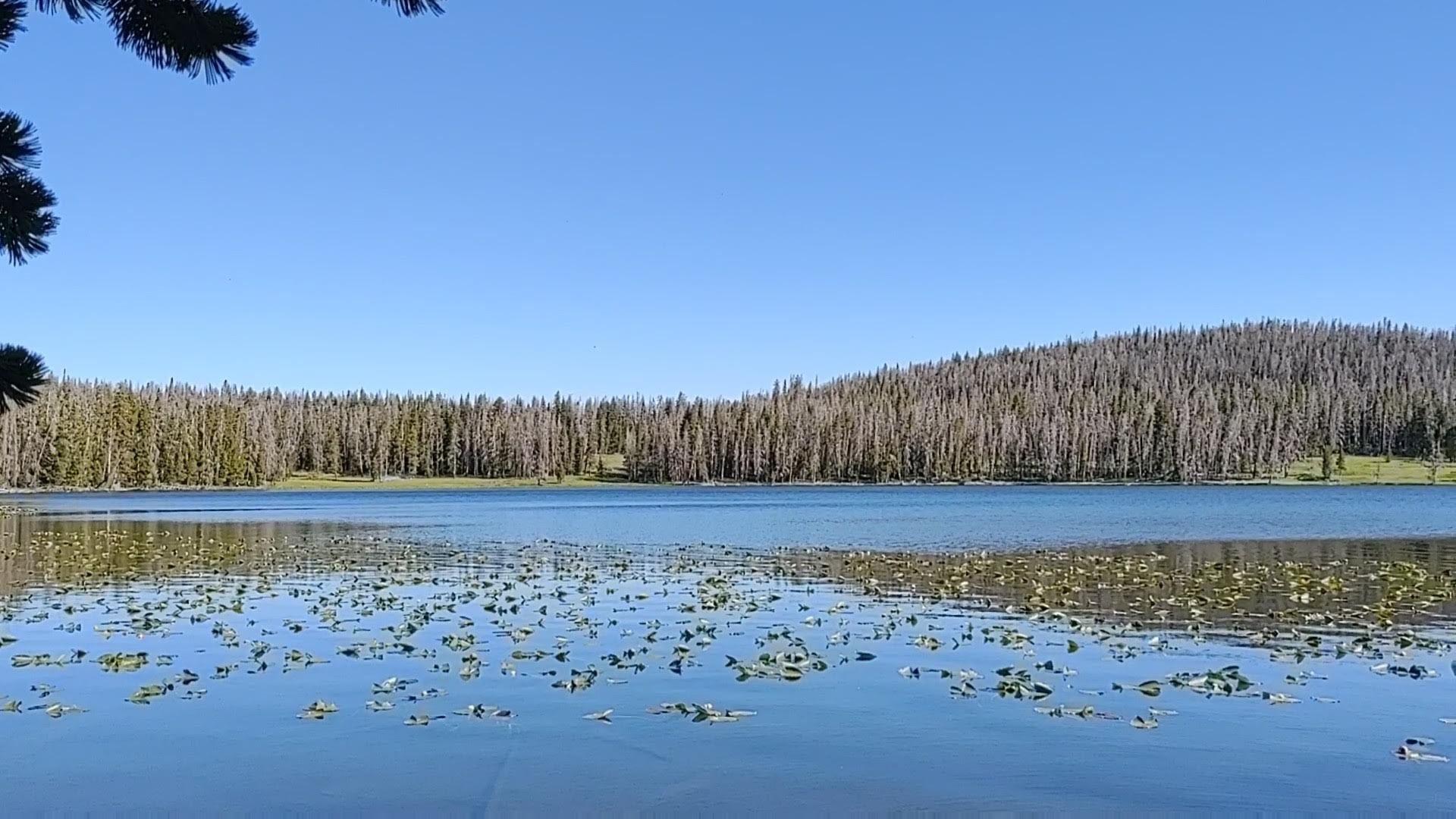 It is here, at the Lake of the Woods, that the Wind River Range “officially” ends. 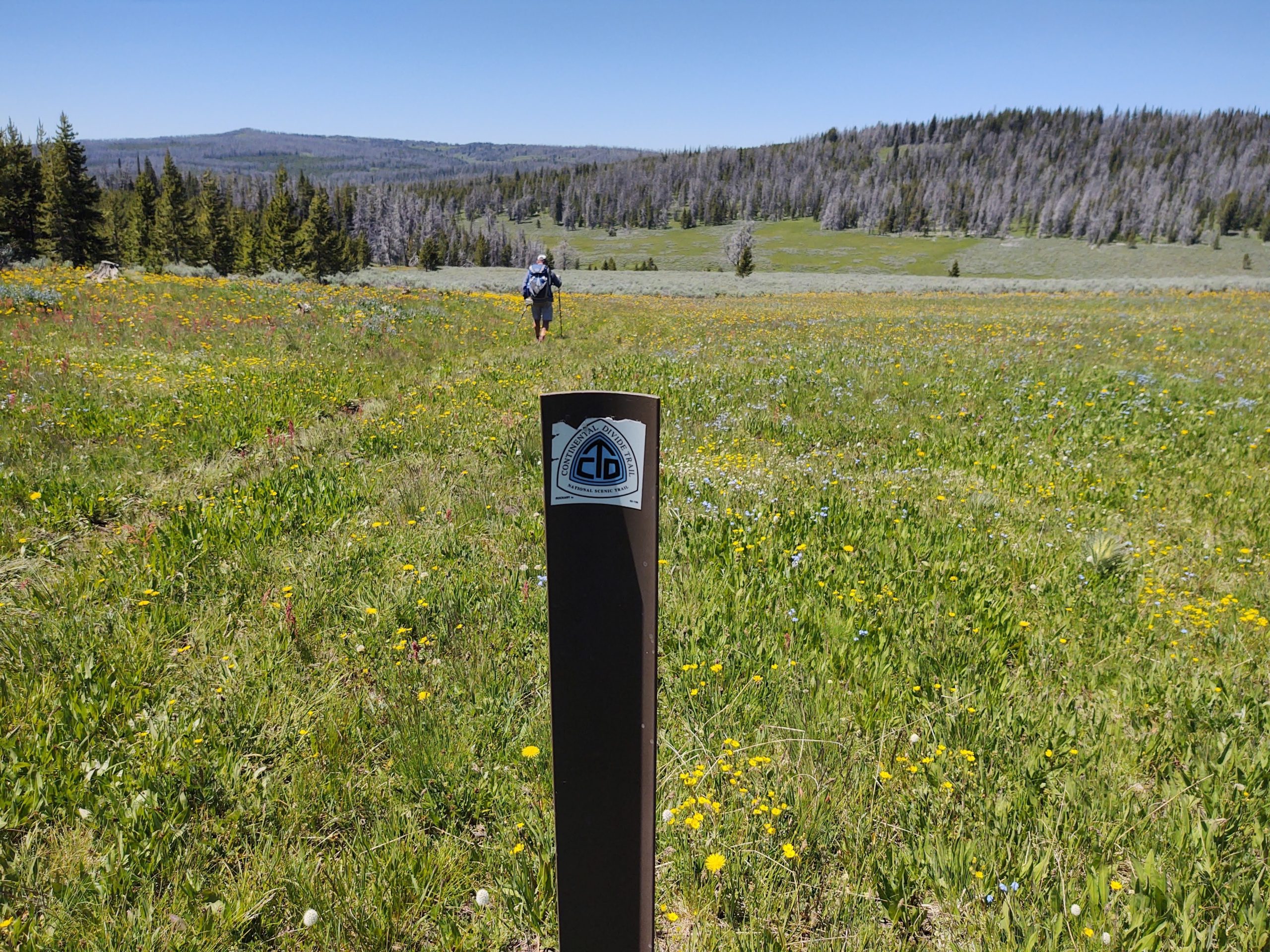 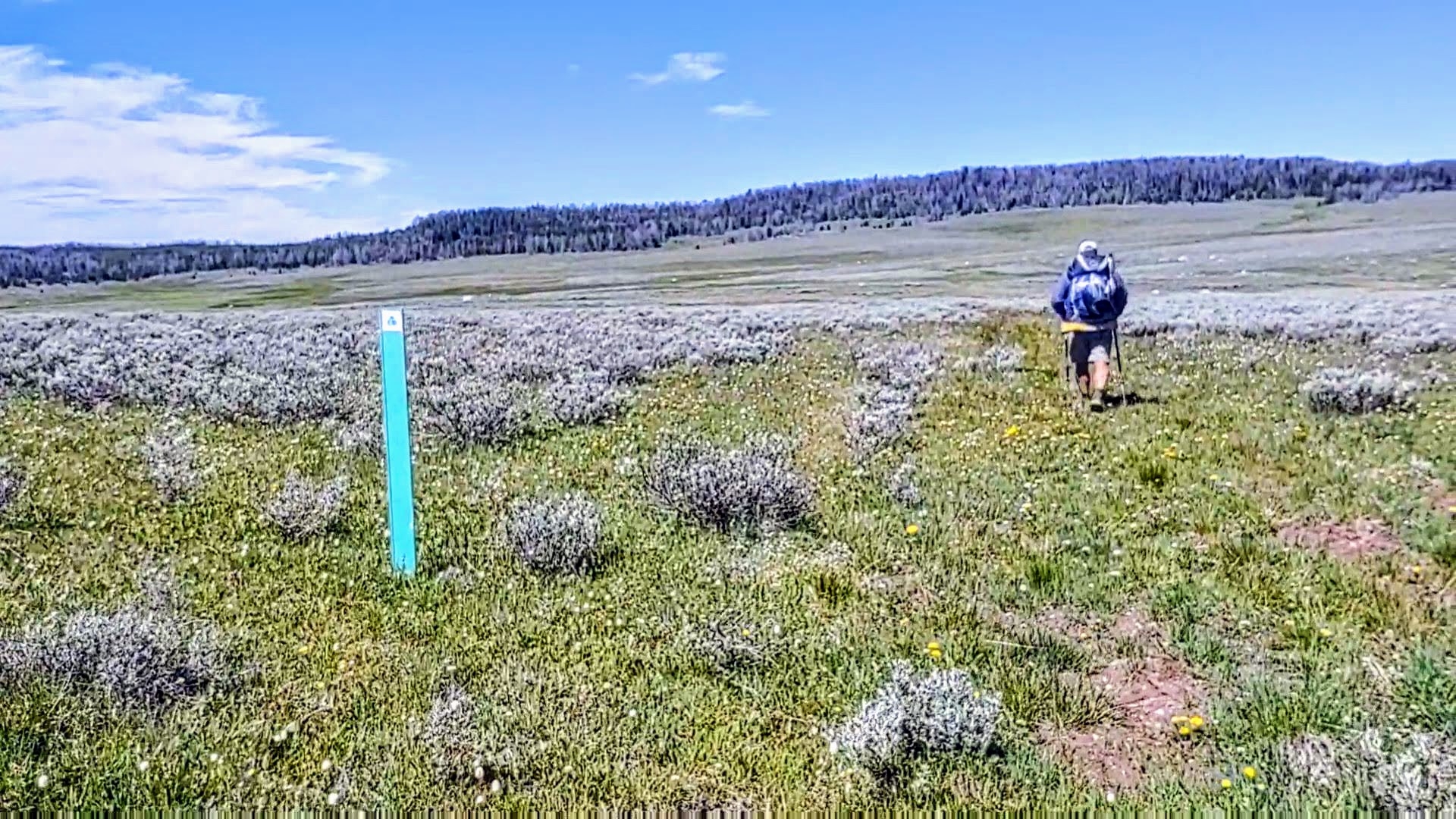 This would require a visual adjustment to our cross country find and seek jaunt across the belly of a wide, colorful meadow, following our million dollar lunch view, of the Tetons.

All packed up, we began another chapter of “Hand Me the Binos” (of which we don’t have). Spotting and then traversing from sea foam green CDT marker to CDT marker, required careful bushwhacking in order to pick the best footing for each span.

Past the meadow, the trail crawled around the edges of now growing hills, with seeps and springs nestled within the folds. With the wind in our face we came around a bend, and caught our first glimpse of a small herd of elk. We watched and eased closer to them as quietly as we could in hopes of capturing the moment digitally. Not a chance, as they caught onto us and deftly walked up and into the trees and disappeared.

And So it Goes

When one chapter closes, another opens up. The Winds kicked our assess, but also filled our souls. Adversity and unexpected challenges are the “enhancements” of ones life. For us, this IS the draw of thru-hiking. Hiking long distances, into diverse terrain, with all its flora and fauna make for a truly “rich” life. As “older” hikers, we are cognizant that these “enhancements” come with a price. A price we are hoping to “afford” for as long as our bodies hold up.

Our next resupply would be at Brooks Lake Lodge, but not without another injury, an “appropriately” distanced grizzly encounter, and becoming the first CDT thru-hikers to “test out” the new route to US Hwy 26. All this however, once we reached the highway, necessitated a small hiatus in Dubois before picking up our resupply at Brooks Lake Lodge.

From there, Yellowstone beckoned.