July 13.  I woke early this morning, eager to start hiking under the big open sky in the coolest part of the day.  Outside the tent, the moon was setting out on the edge of the sage basin.  Soon the pinks of sunrise streaked from the east.

It was hot and open all day.  In the afternoon I passed the A&M Reservoir, but continued a- walkin on by.  I had imagined a shady respite there, something more than a steep pit with water surrounded by more desert.

I continued the pack sitting breaks, my body’s shadow often shading my legs, though when the sun was directly overhead, the strategy had its limits.

I walked further and filled up from a well draining into a cow trough.  One large cow bawled and paced.  Many stared.  I felt sorry for them, living under the hot sun and the dust every day.

I took breaks here and there.  It was nice to have a pack to sit on, rather than sitting in the dust.  Repetition.  That’s the kind of day it was, often having the same thoughts. 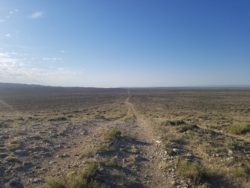 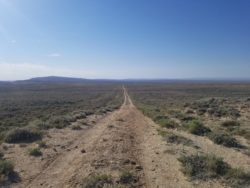 In the afternoon the clouds built up and darkened, a similar weather pattern to the day before.  It was a true relief to hike under cloud cover.  The trail had continued on flat straight dirt roads all day, finally nearing greener tree-dotted mountains by the end of the day.

The clouds darkened and rain fell in several places.  Looking back, the sky was a massive storm ranging over the basin.  Wind grew and gusted.  Lightning flashed, never too near, thankfully.

The rain, light and sporadic, and wind both felt so good, exciting and cooling at the end of a long hot day.  I saw a tent out in the open ocean of sage.  It was surprising, as I could only imagine how frustrating it would have been to set that tent up in the wind, then try to rest inside the swaying frame. 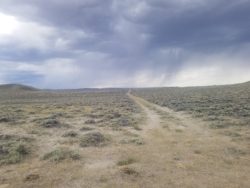 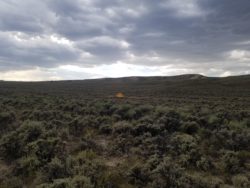 Ahead, I saw a grassy patch.  The wind ran its course and the rain paused.  I set my tent up.  Rain fell a time or two more, and I felt glad to eat and rest inside, to the sound of drops on the ceiling.

It was a simple day.

July 14.  Shortly after starting out this morning, I neared a hiker on the road ahead of me.  She turned and saw me a few minutes behind her, waved, and kept walking.  I picked up the pace, laughing a little to myself, craving a good conversation but wondering if this seemingly independent hiker would welcome company.  Fortunately, I caught up to her and she proved pleasant and open to chatting.  We passed a few easy miles talking about the basin, our hikes so far, and our lives outside of hiking.  It was a nice respite from the world of my own thoughts only.

I had been hiking in the basin for two days, and it felt more like five.  Time slowed, in this world of solitude, slow movement through a vast open space, and few distractions.

We stopped at a cow pond water source, to fill up on water.  Another hiker caught up and I felt as if I were on a different trail, to be gathered with two other hikers at one time. Aside from meeting couples, it had been a while since I had met more than one hiker at a time on the CDT. 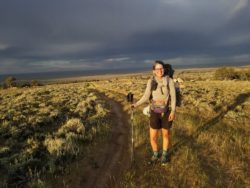 We soon dispersed, hiking at our different paces.  The trail wound over some hills, then more mountains appeared, of different colors and textures, depending on the flora and rock.  After the uniformity of the basin- sage and flat- it was a relief merely to see some new features in the land.  Views of the snowy peaks of the Wind River Range ahead, towering up from the dry desert, were a welcome sight in the afternoon.

I listened to books or music nearly all day, glad to have something to engage my thoughts.

In the afternoon I approached a large roofed wooden sign, coolers with gallon water jugs beneath.  I was grateful to the volunteers who restock the water supply, and grateful for the shade of the sign, and the seat on the water cooler.  It was nice too, to read through the journal left there, filled with comments from hikers who had already passed through.

I hiked and hiked into the evening.  Another 30 mile day, out in this flat country.

July 15.  The morning and most of the day were blessedly cloudy with frequent breezes.  It made a grand difference, to hike without being sun-baked all day.

I watched a few pronghorns watch me, then bound away.  They often make a very loud huffing noise when startled.  I was surprised.  It was not discreet, for a creature of prey.  But then, later I learned that pronghorns can truly run: long distances at 35 mph, up to 55 mph, and making bounds of up to 20 feet (!) when running.  With that speed, there’s less need for stealthiness, I guess.

I saw a herd of wild horses near the pronghorns, and had seen prairie dogs in recent days.  The wildlife sightings always add to the experience. 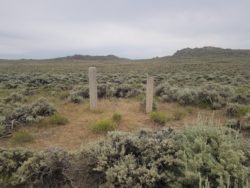 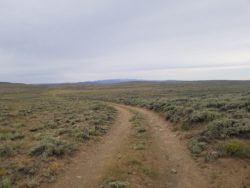 I also hiked by signposts for the California Trail and the Oregon Trail that morning, routes traveled from Missouri to the Northwest in the mid-1800s that marked the perilous journeys taken by many pioneers and their yearnings.  On the hiking map on my phone, hikers had commented on these trails with imaginative statements like, “Broken axle.  Take 3 days to repair.”  And: “day 89 on the Oregon trail: had to kill my ox here…Wife and kids in low spirits…to gold”.  One hiker jokingly compared the pioneers’ experience to his own: “Pace: grueling, rations: meager”.  It was something to stand in place for a minute and imagine wagon trains careening through this desolate, arid, solitary land 200 years ago.  Without obvious signs of development at the moment (occasionally a ranch truck drove by), I imagined the landscape similar to the land reflected in the emigrants’ eyes.

In the afternoon, I hiked over particularly arid, dusty miles to the edge of the Great Basin, everything in view a monochromatic white/yellow.  It was refreshing to ascend the mountains on the edge and look out over the landscape from above.  There were definitely observable levels of aridity.  I was glad, looking out, to have passed beyond that white/yellow sandy zone. 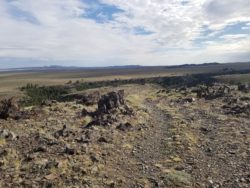 In contrast, the mountains from which I stood contained flowing creeks, aspens, pines and livelier green sage.  I hiked over several low mountains and into South Pass City.

South Pass City (“Status: Ghost Town” and “Population: A few” per westernmininghistory.com) is quite a unique small community through which the CDT directly passes.  Much of the town itself is a restored historical site, including many buildings preserved from their gold rush days, back when the town briefly thrived.  I enjoyed walking from building to building, sometimes along an old wooden sidewalk, peeking through wavy glass windows at displays inside a cabin, the Carissa Saloon, the Exchange Bank, the blacksmith’s shop, among other buildings.  Furniture arranged inside homes as if the occupants were just in the other room and would be back in a moment. 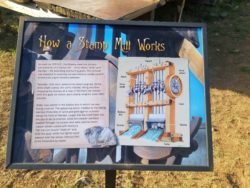 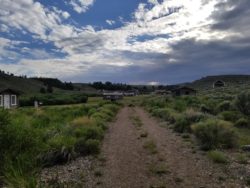 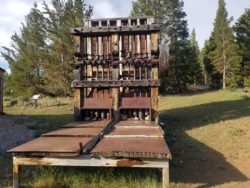 The next morning I walked down an interpretive path with information about gold mining.  It was interesting to see the stamp mill, or ore crusher.  The entire process of mining, including this last step of crushing, seemed so dirty, dusty, tedious and primitive.  Not a life to envy.

From South Pass City, I hiked a few miles to the next highway, then caught a ride into the town of Lander, to eat better meals and resupply.  On the drive from trail to town, the driver had mentioned a cattle drive ahead.  Sure enough, we soon stopped behind a line of cautiously advancing cars, as cattle trotted, lowed and bawled along the highway, crossing the road here and there, confused, drooling.  Calves followed their moms, or anxiously tried to find their moms again.  Cowboys rode horses and guided alongside, lariats in hand and at the ready, nudging the herd to greener pastures.  The driver and I watched and laughed sympathetically, half-pitying these cows in the chaos.

The cattle drive was surely a mundane sight to the locals here, but new and surprising to my eyes.  Cowboys still exist, out here in the wild west!  Unlike my notion of them as men/women of the 1800s, confined to the timeline of pioneers, saloons, and gold mining. 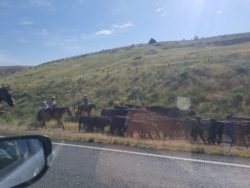 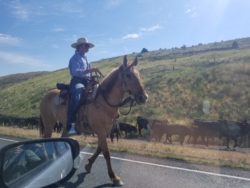 Between the landscape, wildlife, historical monuments and cowboys, my time out in the Great Divide Basin in Wyoming proved a full wild west experience.