Countdown to the Great Divide Trail

Like so many segments of society, COVID has thrown the thru-hiker community a nasty curveball. In March, parks and other private lands began to close and/or restrict access. I have nothing but empathy for the many folks whose plans to complete the AT, PCT or CDT went from “living the dream” making arrangements to get off trail. Months of planning, training and preparation have hopefully only been delayed.

Due to its northerly location, the GDT doesn’t generally become accessible until late June (particularly in high snow years like this year). Those leaving sooner often encounter hundreds of miles of snow, mud and the risk of late season avalanches. At only (700 miles) most folks complete it in 6-12 weeks. While I watched these development with concern, I took solace in the fact that my trip was still months away. I chose to be optimistic and continue with planning and preparation.

Planning for the Great Divide

Last fall (in no small part due to the inspirational stories on the Trek and Backpacker Radio), I decided I was going to hike the GDT in 2020. Thanks to the incredible support of my family and work, I was able to arrange to take the summer off. 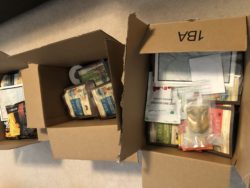 January began with the mad rush for permits in the Canadian National Parks. Yet as COVID began to rear its ugly head, I began to hear of increasing demand for freeze dried meals. Mountain House stopped taking orders and Costco was starting to sell out (nothing like three cheese mac to see you through the apocalypse). I decided it was time to get my food orders in, and thanks to the rapid turnaround by the folks at Packit Gourmet, I crossed the US border into Montana to grab my package just hours before it closed.

For much of March, April and May my family stayed at home. My work transitioned to a seemly endless sequence of Zoom calls. I began packing my supply boxes and dialing in the last of my gear selections. As the snow melted and word outside began to green up, I kept a close eye on first the growing COVID numbers in Alberta and then the thankful decline. Starting in early May Federal and Provincial governments began to publish plans on how Canada would start to re-open.

Right now things are looking positive for folks in Alberta and BC to hike the GDT this summer. Regardless it will make for a unique experience this summer, with flexibility the word of the day