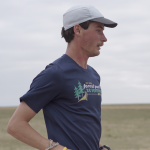 My first town day felt fairly refreshing and exciting, but getting back out on trail also felt equally exciting. 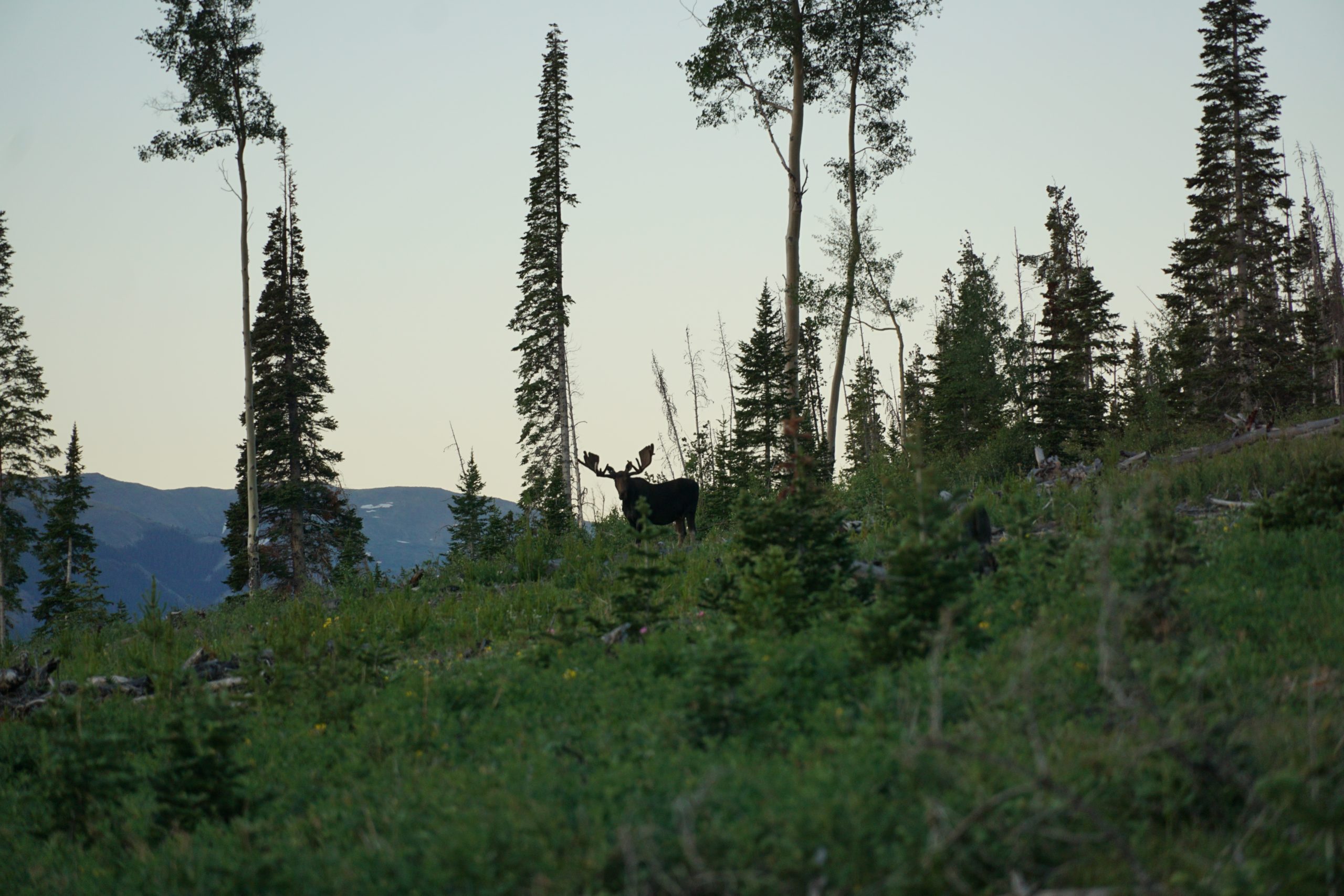 My morning started early to avoid afternoon thunderstorms on a four-mile-long alpine stretch, but I wasn’t the only one out on the trail early. A mountain biker passed me just a few minutes into my hike, but came riding back by me later explaining that there were not one, but two, bull moose on the trail and that he wasn’t going to pass them. Wanting to see them, I excitedly strode up the trail before spotting them from a good distance across an open area. The two herbivore, walking tanks seemed pretty attentive to me and this one watched me very carefully as I circled around them along the edge of the field. 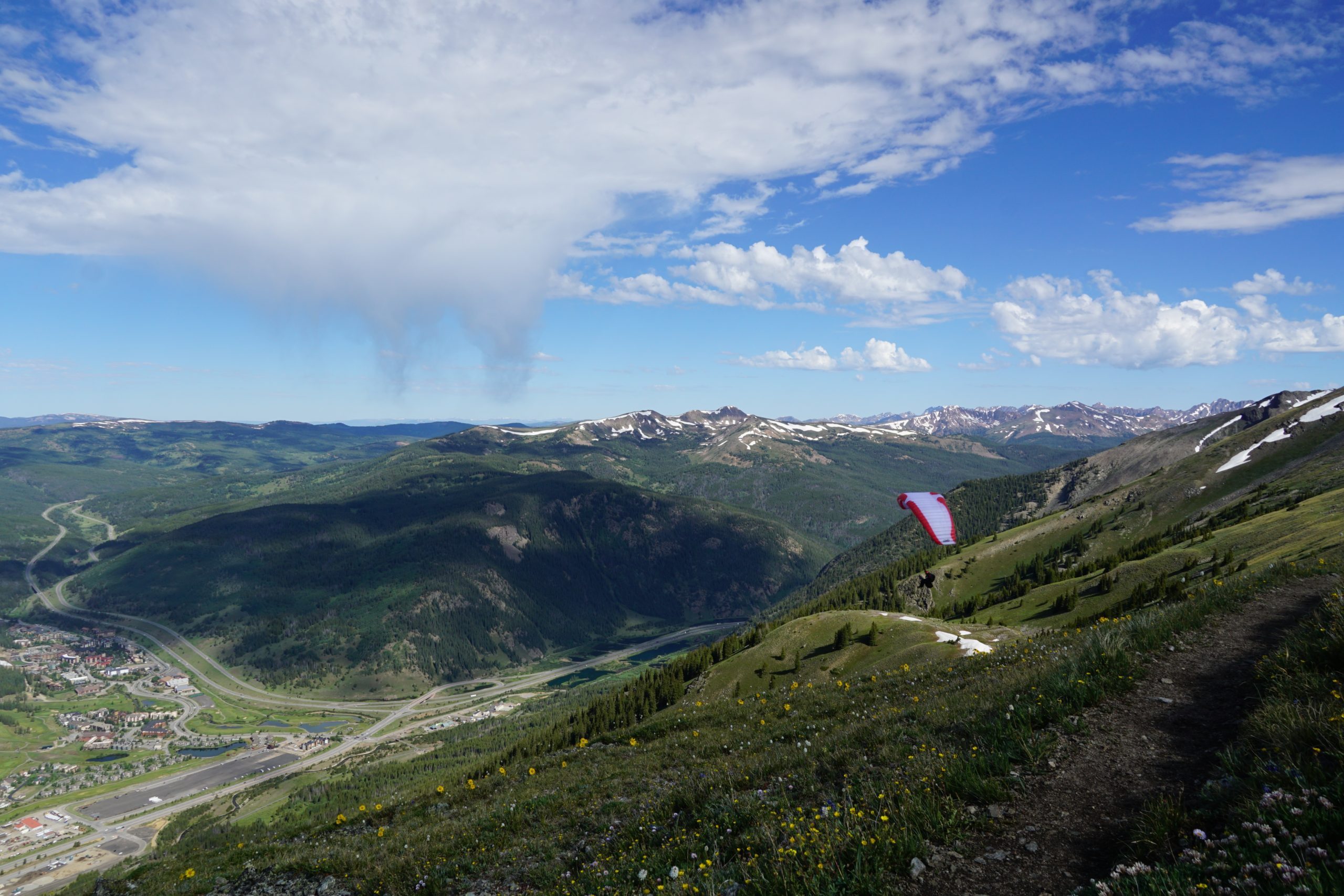 As I neared the end of the alpine stretch, I noticed a person carrying a bundle of red-and-white fabric on the peak above me. At first I though they had spent the night on the ridge, as it an oddly windless day; however, I quickly noticed they were also wearing a helmet and I realized it was a paraglider. I immediately found a spot for a break to wait for them to come flying down and my efforts were quickly rewarded with the whoosh of the wind through their wing. 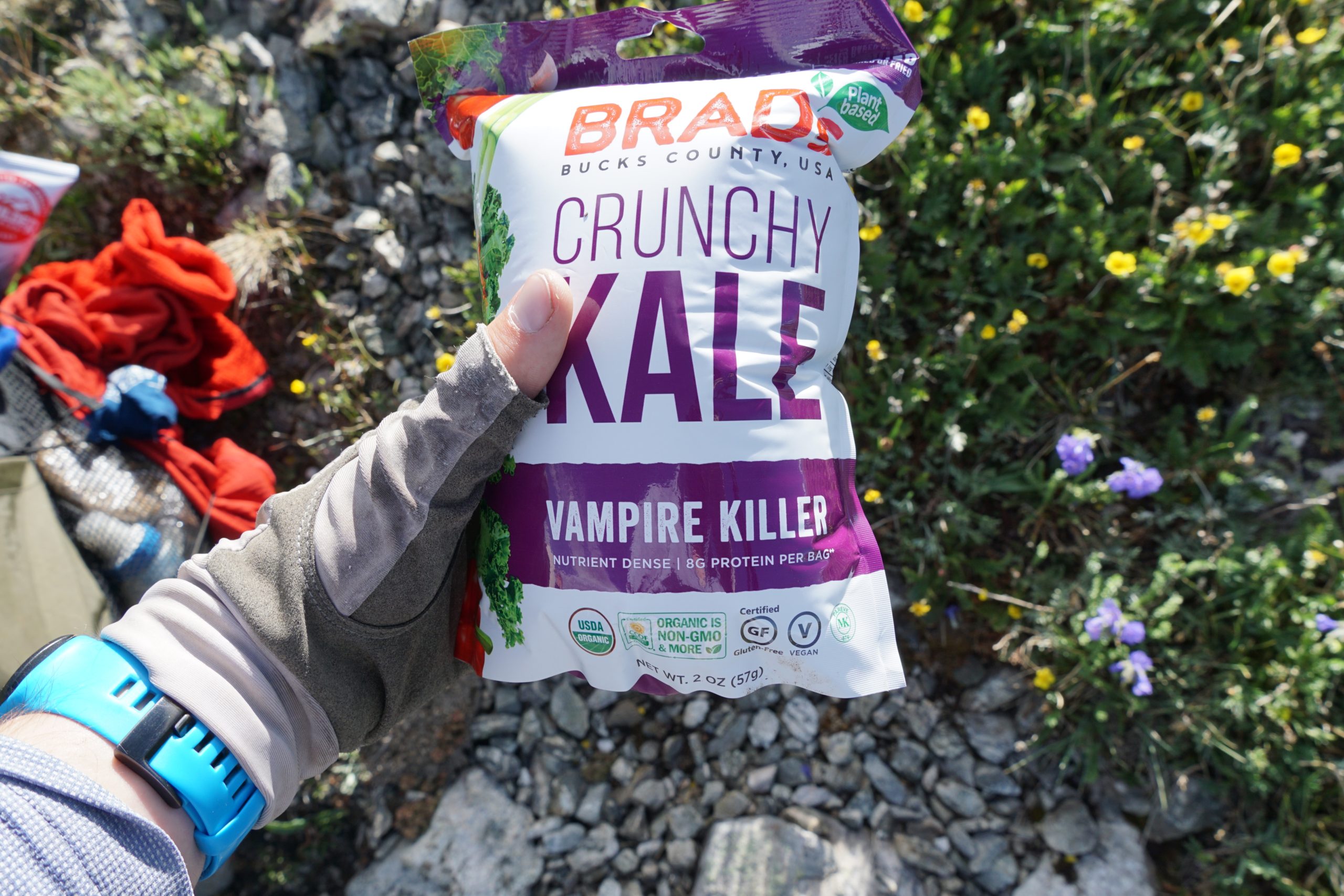 This dried kale was my snack of choice as I waited for the paraglider and I think it has been one of my favorite so far in terms of deliciousness and much if ballooned with the altitude. At only two ounces and 180 calories, I think it was best eaten on the first day because of the space it took up.

After the paraglider, I stopped in Copper Mountain for a few hours to eat another hot meal before ending the day with some more miles.

In the hopes of regularly doing 25 mile days in the second half of the trail, I decided to attempt my first 25 with plenty of time for recovery afterward. This happened to work out with a net downhill day after a small climb over Elk Ridge and Kokomo Pass. 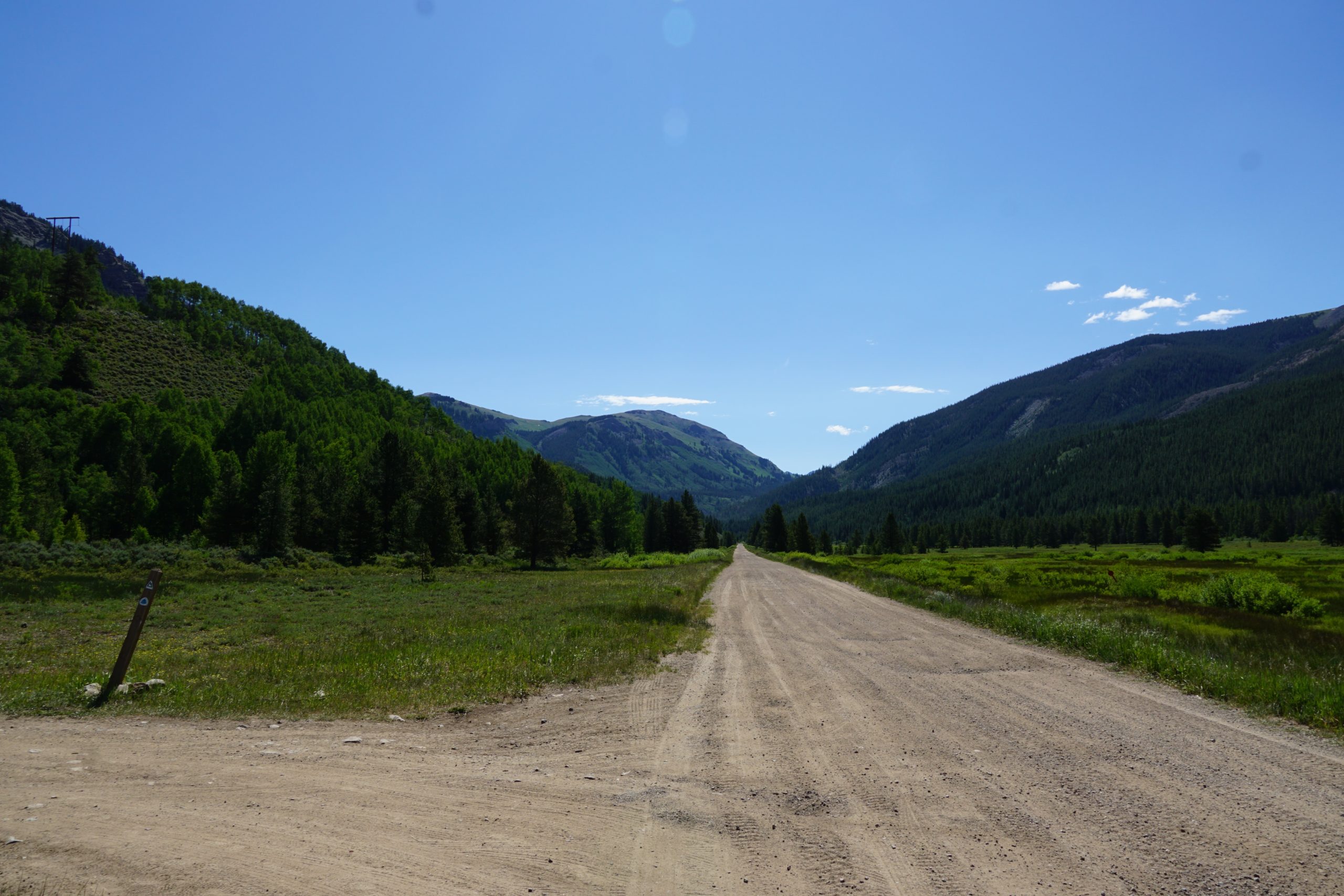 The heights of Elk Ridge were strongly juxtaposed against the hot, flattish walk through Camp Hale. Here I felt like I was melting at only 10 a.m., but a short break under a tree helped restore some of my joy for the day.

Although I wasn’t quick enough to get my camera out, I either saw a marten or weasel running through the forest. It was similarly colored like a marmot, but skinnier and longer than one. 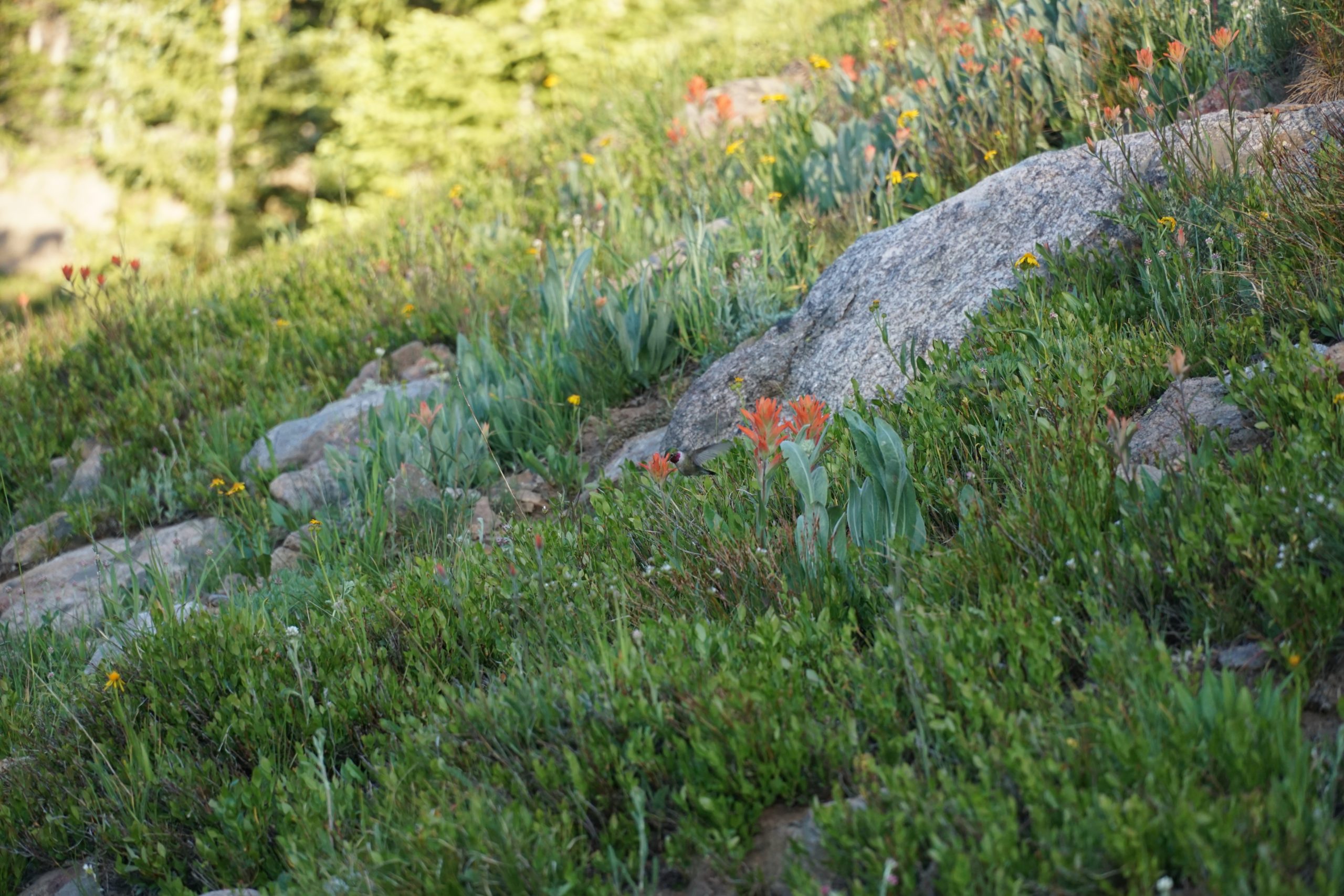 It was at the end of the day that I cried for the first time on the trail. I have never been diagnosed with separation anxiety, but have certainly had very intense emotional reactions to being away from people I care about. I was surprised to experience that with the little trail family I had built over the last week on the trail, both Goldie (a former Trek blogger) and Chili Dog. I knew I would see them down the trail, as it has a funny way of randomly reconnecting people, but it was still a beautiful and emotional moment. 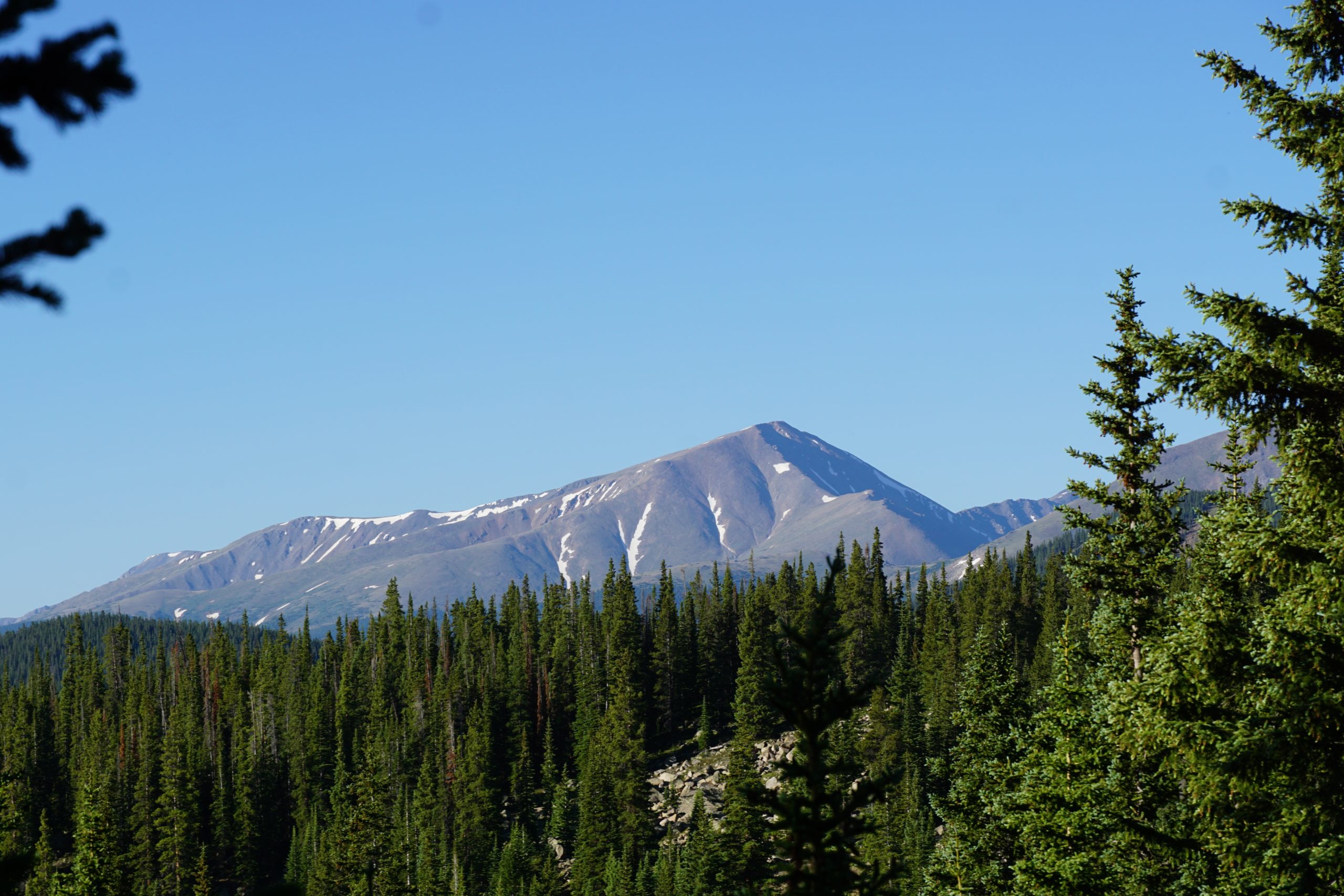 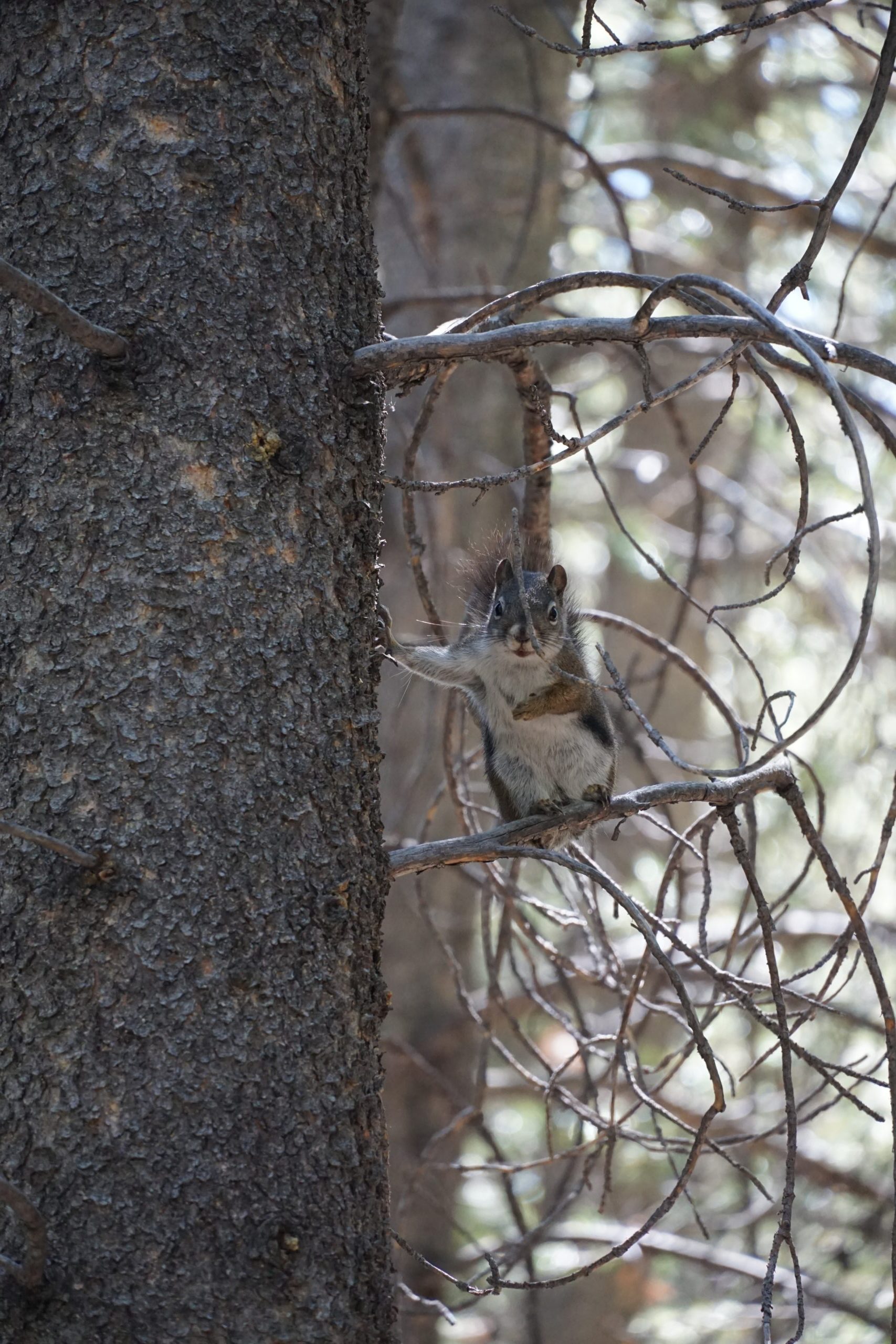 The constant chittering of the squirrels and chipmunks among the trees, and the pikas and marmots above the trees, has yet to fully annoy me and I still each new chattering creature funny. This one posed quite candidly and casually for my camera as I passed underneath. 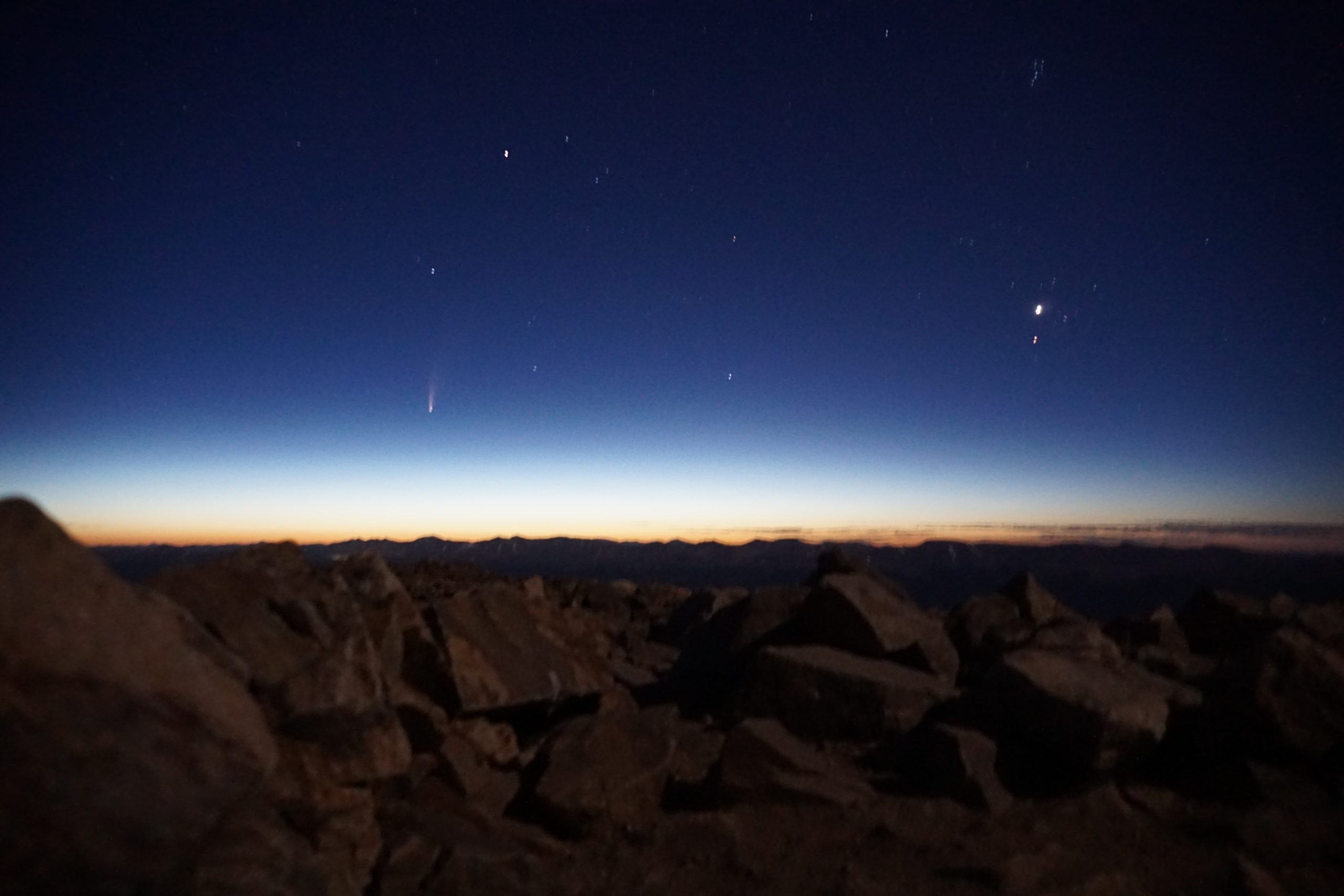 I will admit that handheld predawn photos aren’t the smoothest looking, but nearly 45 minutes on the summit of Mount Elbert, the highest peak in Colorado and the second highest peak in the contiguous United States, gave me a lot of time to stargaze and take blurry photos. In addition to a moon bright enough to hike under without a headlamp and four visible planets, the comet Neowise was visible as the faint streak heading toward the skyline. 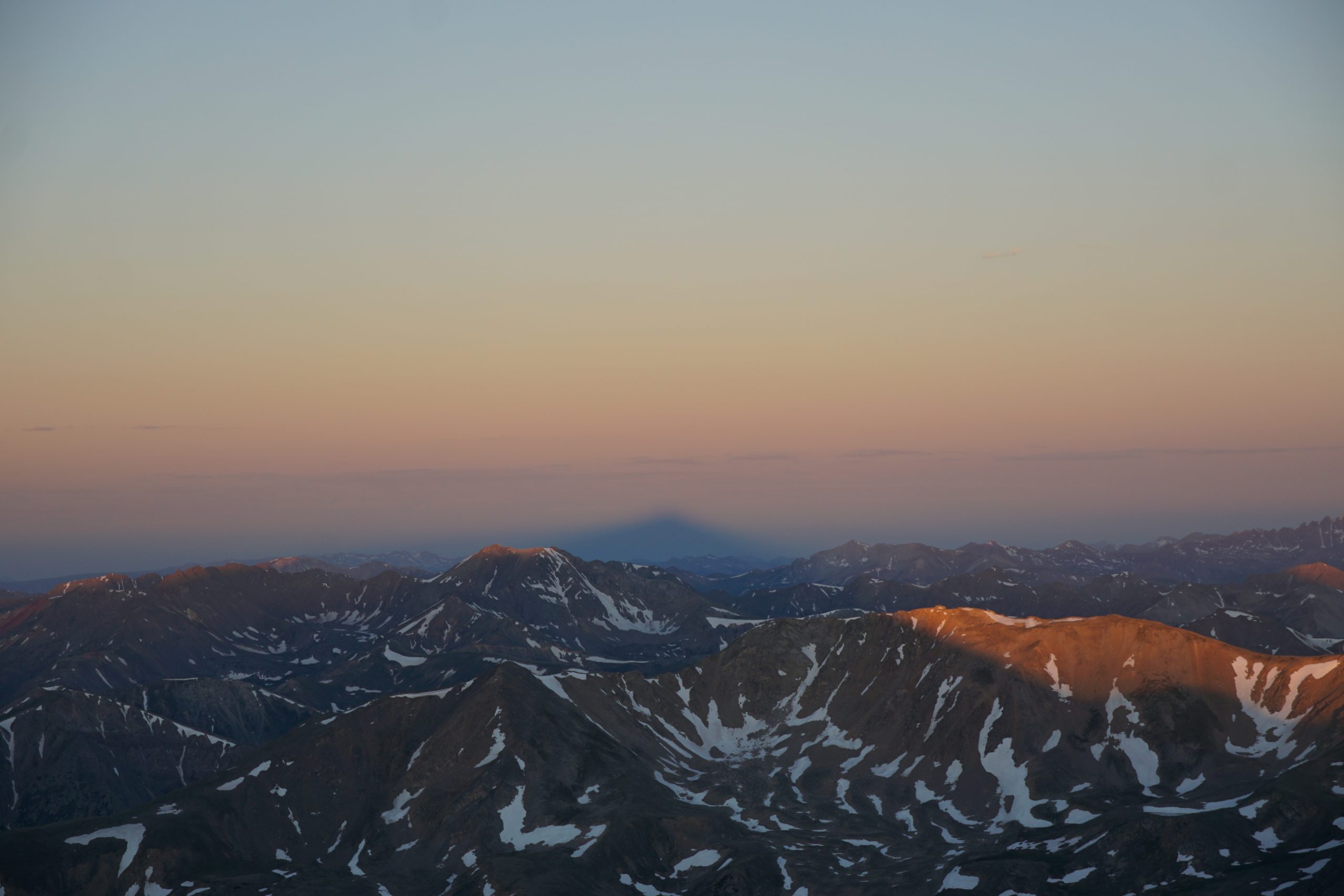 While not quite as stunning as the sunrise/sunset shadows cast by mountains on clouds, the long shadow of Elbert was still incredible. Cue New Dawn Fades by Joy Division, but only for the name and not the lyrics or their meaning. 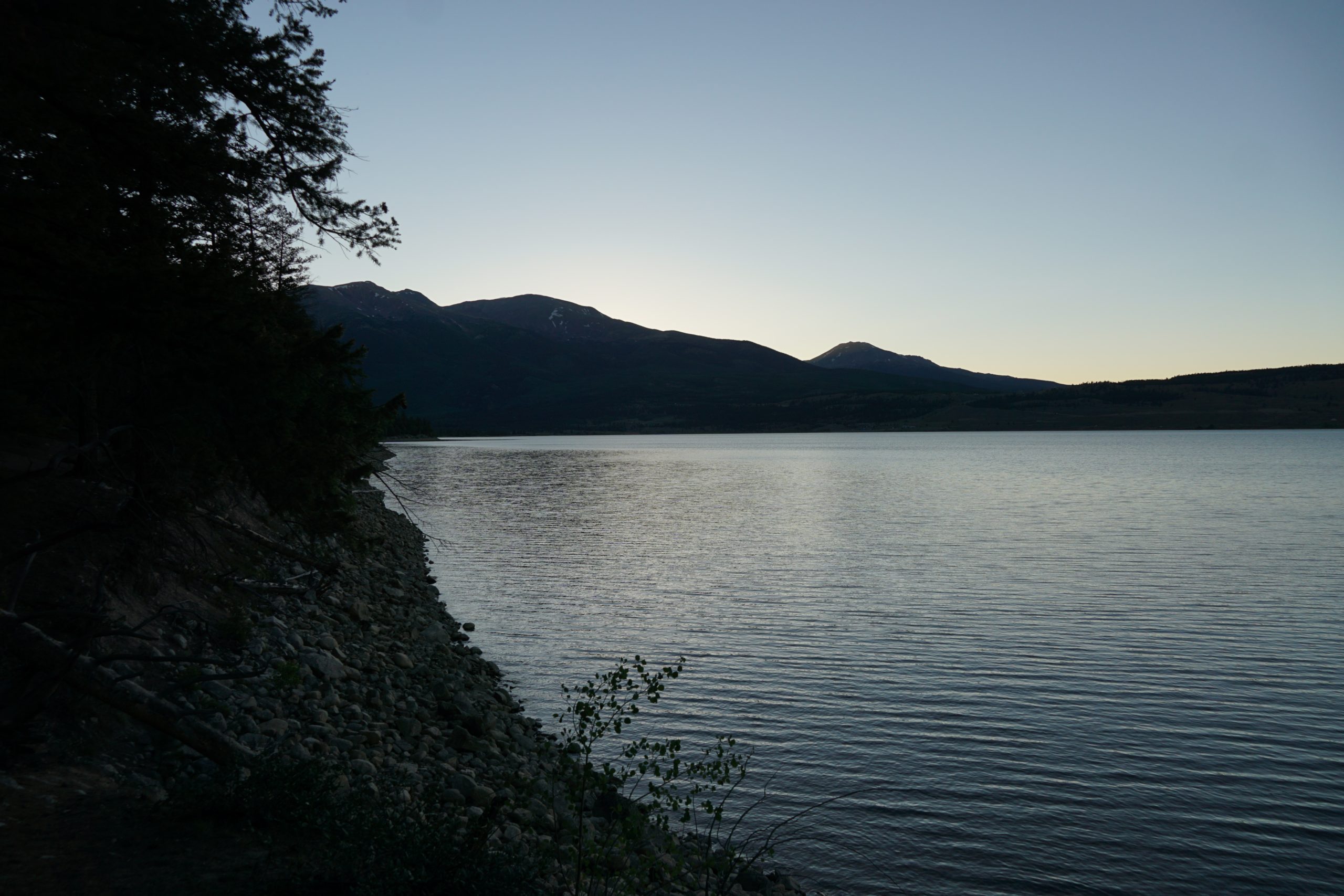 The 2:30 a.m. start to the day stood in stark relief to several hours spent lounging around Twin Lakes resupplying and eating. My first trail magic was had in the form of an ice cold Crush, provided by Caveman. A long walk around the lake ended the day and set me up to start the Collegiate West the very next morning.

I am in continuous awe of how many people I have met on the trail and how genuine and joyful they have been. However, I also recognize that I am a white, cisgender male and this certainly plays a role in the those interactions. I don’t have to worry about being profiled for wearing a mask in towns, being questioned deeply for why I’m on the trail or where I’m “really” from, for feeling like there is almost no one else on the trail who looks like me, and so much more. I want to acknowledge my privilege, unconscious biases, and the fact that I am walking on stolen land; specifically of the Cheyenne, Ute, Jicarilla Apache, and Pueblos. While the Colorado Trail guidebook includes some of this history, it leaves out the aggressive invasion by the Spaniards and the forcible relinquishment of land after the signing of the Brunot Treaty in 1874 by the Confederated Utes. As a white person, I am inherently linked with these acts of aggression and white supremacy, and I have been doing what I can on trail to work against this. While listening to podcasts about race/gender/sexuality/etc., donating to organizations, signing and sharing petitions when I can, and calling out microaggressions/racism is not the same as being in the streets protesting: it is the best I can do while out hiking for this time period.

My name is Will and I use he/him/his pronouns. I work as an outdoor educator during the school year and try to fill my summers with running and hiking adventures. In 2020, I plan to thru-hike the Colorado Trail as my first long trail. Between my runs and hikes, I like spending my time eating freshly baked goods, listening to good music, and writing.