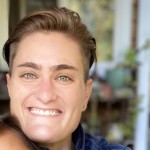 After losing some miles to the rain, we got up and out early this morning, along with Olivia and Sara. They describe the approach to Muir Pass as a “gradual incline”…for 8 miles. Evolution Lake was stunning and we ran into a Dads of the Northern Hemisphere annual retreat (or maybe a Christian Men’s Group?)

Thunderstorms threatened all morning as we made our way to the pass (and the iconic Muir Hut). When it’s blue skies all around you and you’re heading right into Mordor, it gives you a sense of urgency. 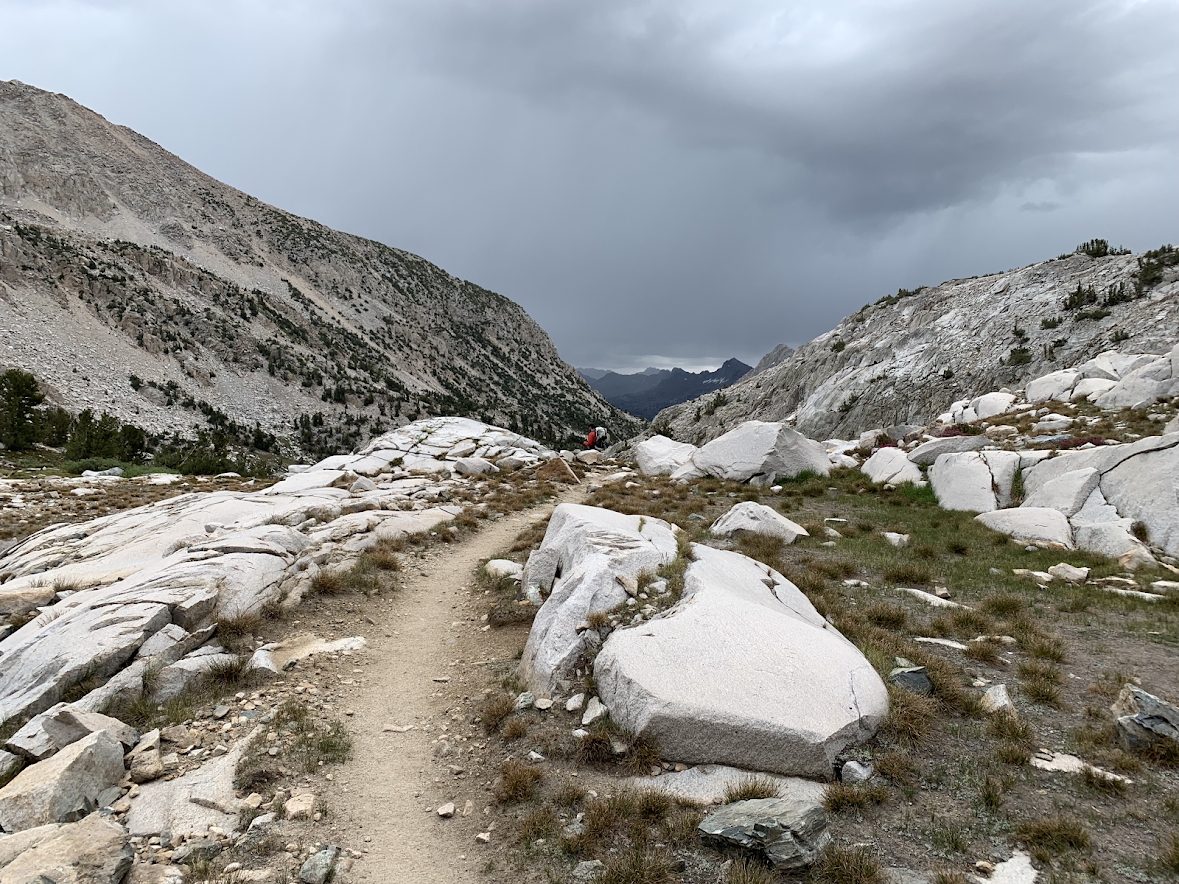 about to run into Sauron or Voldemort, but either way, it’s not looking good 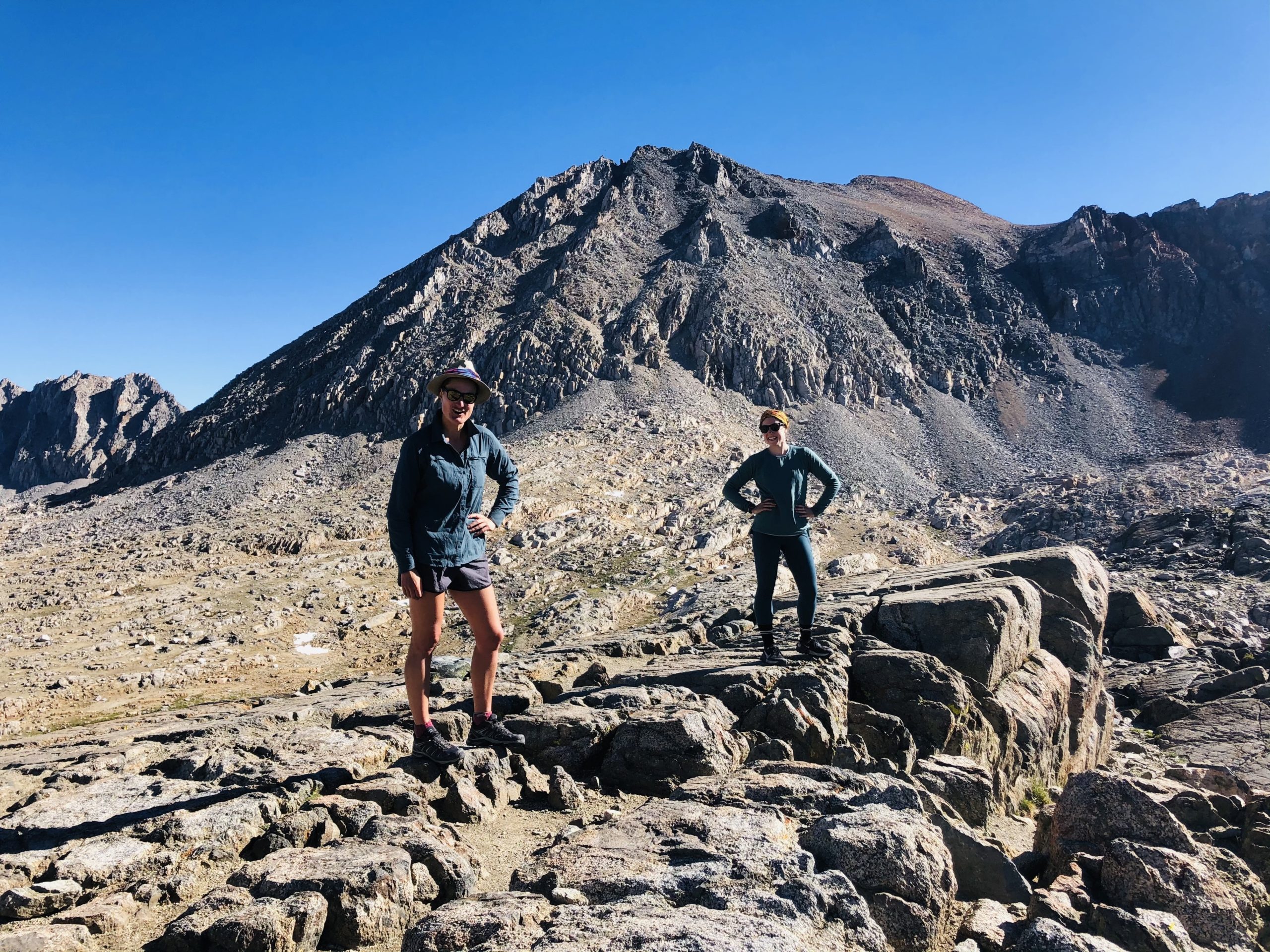 what IS this face? 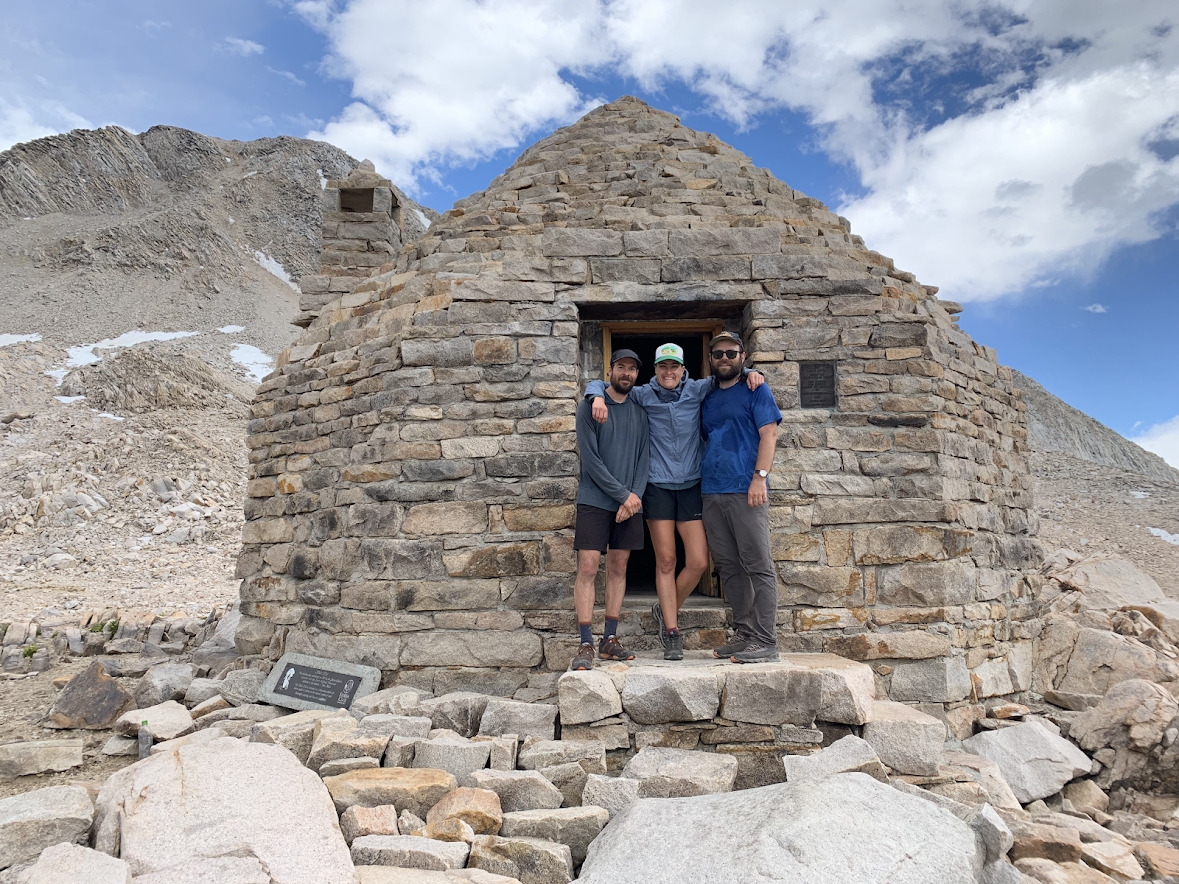 me and ze boys 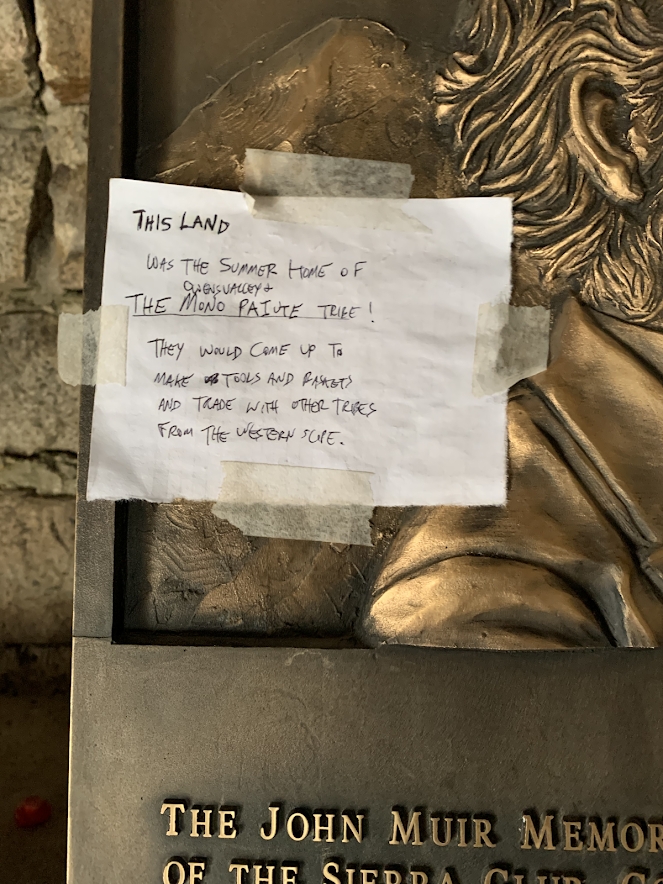 let’s get the facts cast in bronze, too 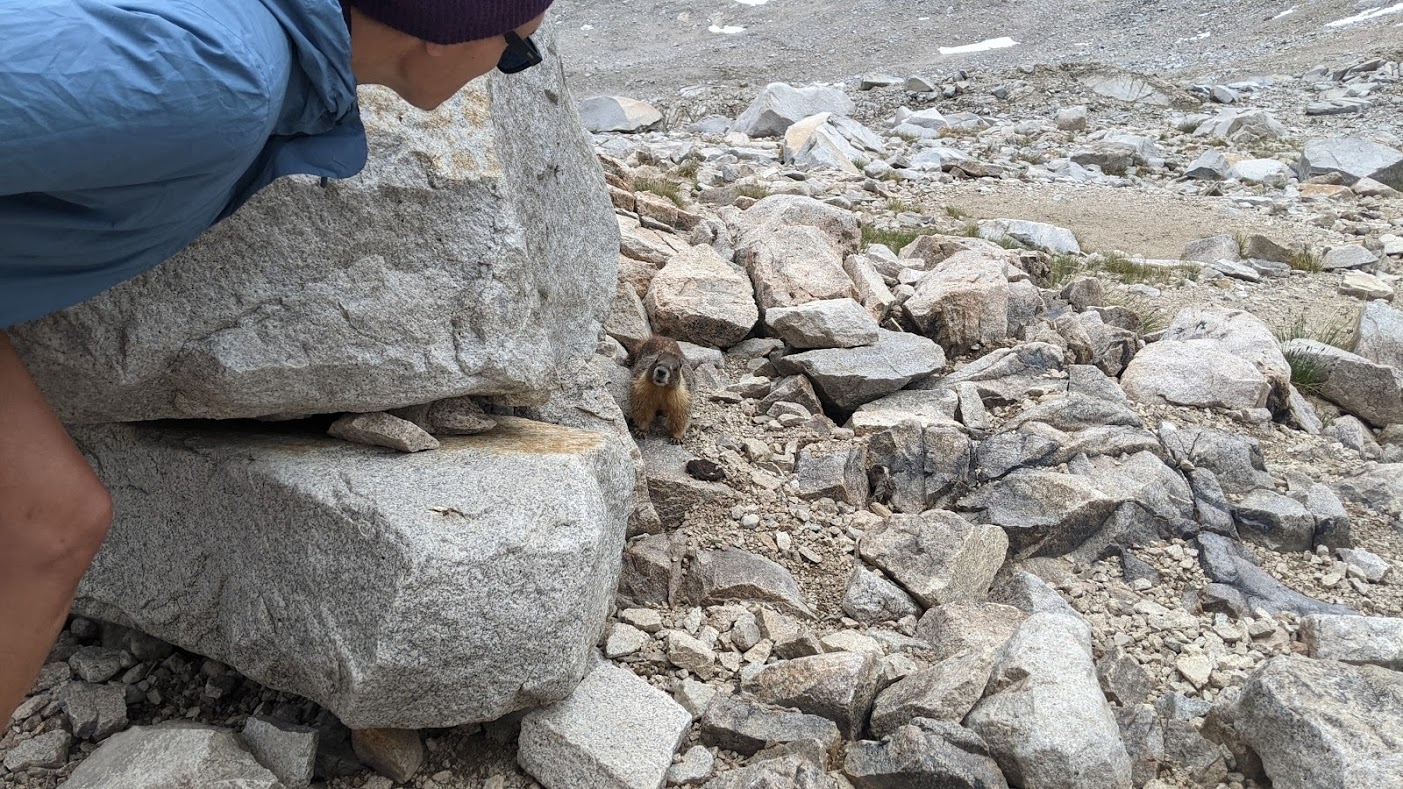 Storms held off for us to get over the pass, sit down to prepare lunch, and juuust as I was about to take my 4,000th bite of Tuna Tortilla Delight, we were suddenly in a thunderstorm with hail, high winds, and a temp drop of 20 degrees. Our scramble down into Le Conte Valley was record speed, but not without its wonder. The descent took us through waterfalls, fuzzy antlered deer that paid us zero attention, and the smell of the manzanitas permeated the air.

I will take these conditions over mosquitoes any day of the week, so while it was cold, wet, electrically charged and windy, I felt somehow like we were in the Pac NW. Soaked head to toe by the time we made it down, but enough miles to clear the storm zone and dry out before the infamous Golden Staircase tomorrow. 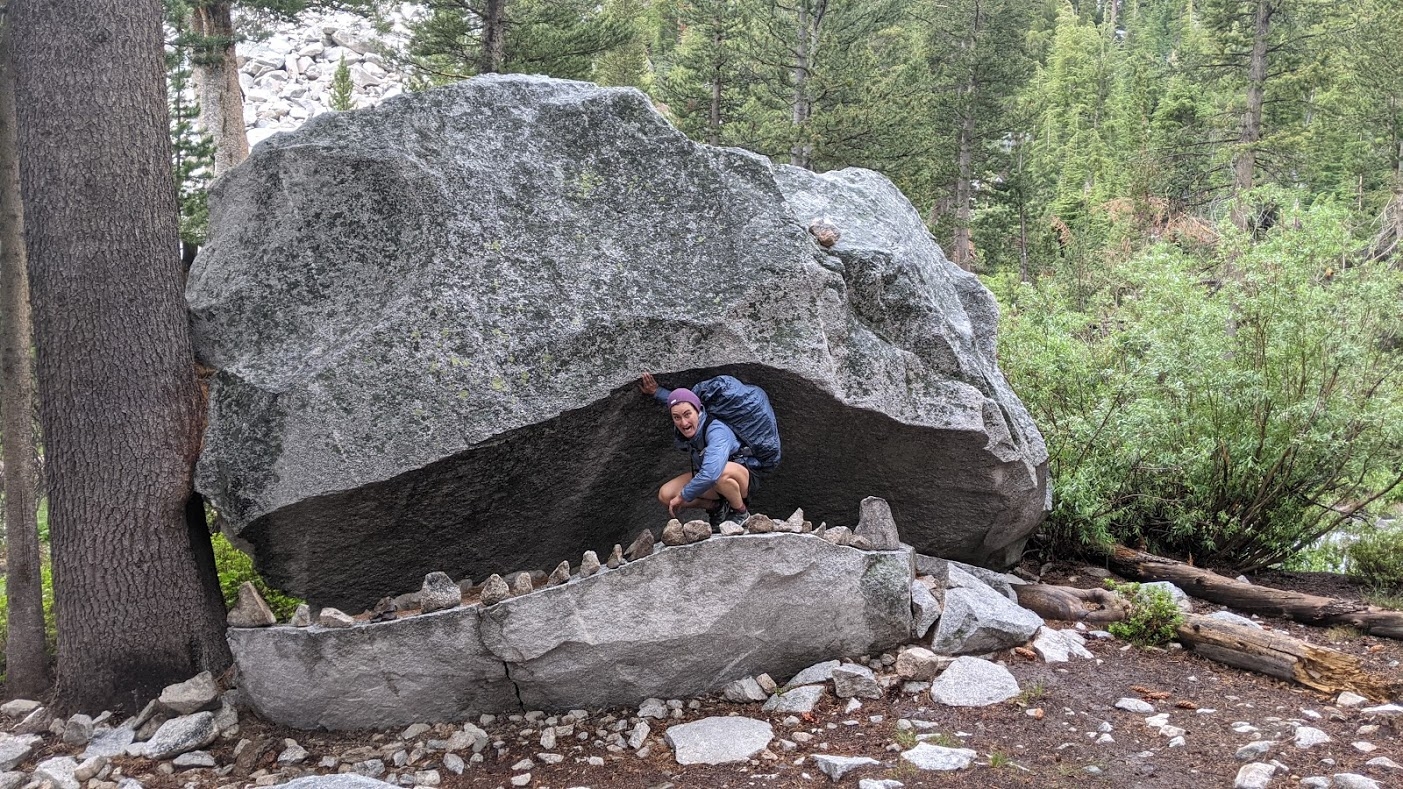 obligatory “the JMT rock monster is eating me” photo

Woof. This day, while pretty short mileage-wise, was intense. Greeted by a deer with fuzzy antlers who had no fear of us at all. 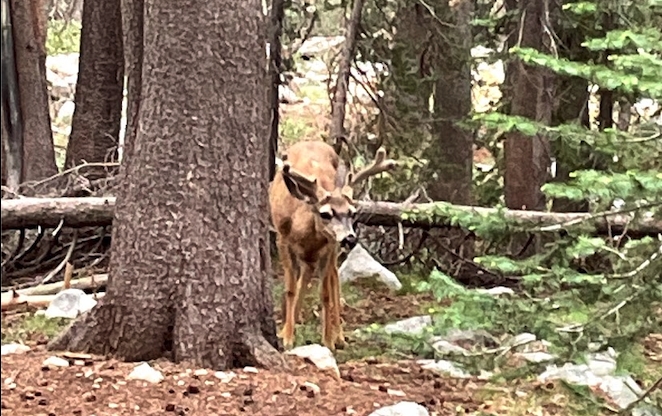 oh deer, running from the Fuzz

A mile before Golden Staircase, thunderstorms kicked back in and we had a delay of game until about 3pm. Thankfully, we’d run into Sara and Olivia again and passed the time talking about van converting, CBD mocktails, and trail running ultras. These gals do like 50 and 100+ mile races, whuttheactual. Joe, Mike, and I also took a quick inventory of our remaining food to make sure we had what we needed to finish out the trip. We still had ~5-6 meager days, which means we’ll live, but the hiker hunger would definitely continue to be a contender.

The rain played with us the rest of the afternoon as we ascended Golden Staircase, nature’s Stairmaster. The views can’t be captured by technology, but here’s a glimpse:

Headed up with our now growing posse and there were many costume changes. The one thing that drains me more than mosquitoes is getting cold and wet while the temp drops. Miraculously, once we reached the camp spot for the night, the storm broke and the sun came out just long enough to warm our bones a little. Dinner of instant potatoes, rehydrated veggies with a view of Palisade Lakes, c’est magnifique. 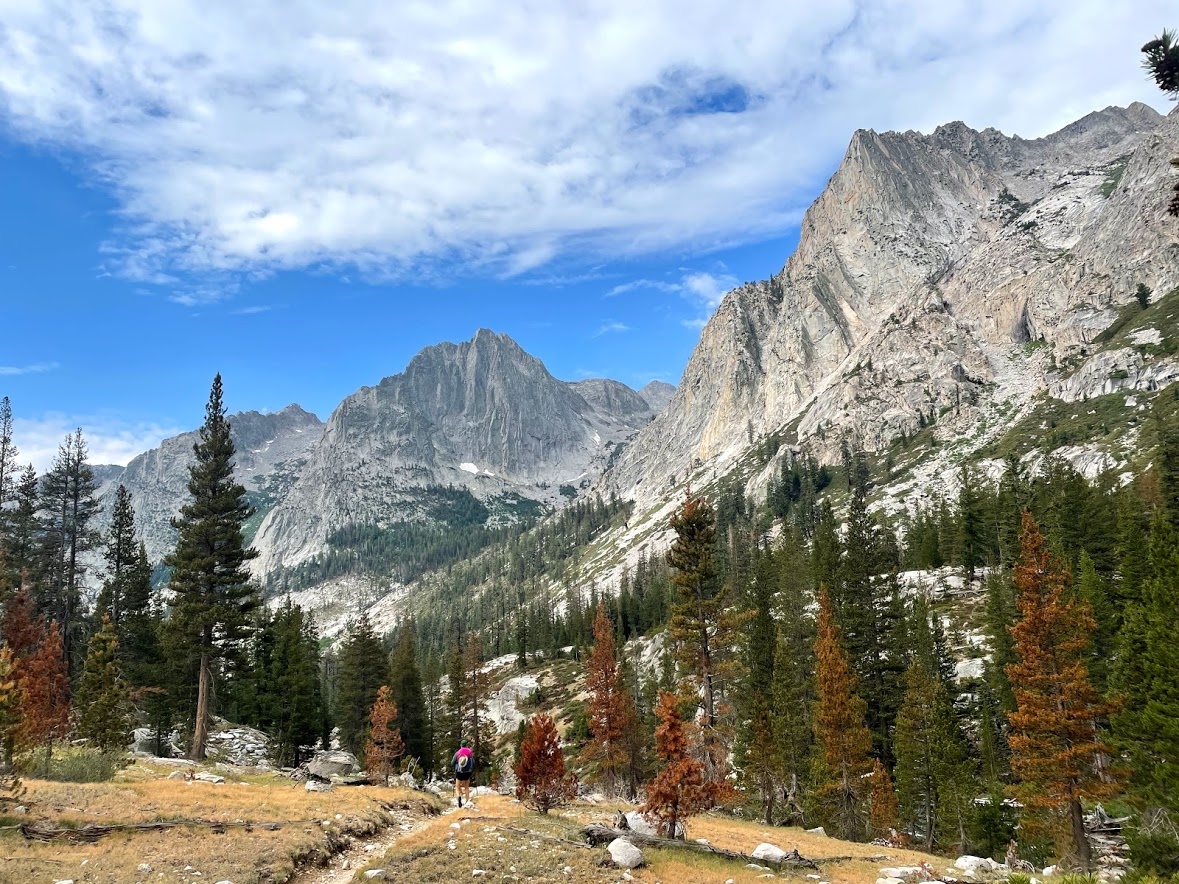 realtalk, I don’t remember where this was exactly, but it’s too stunning not to include

Best laid plans, today was going to be Mather Pass and Pinchot Pass for a total of around 17 miles. Hit Mather early and it was spectacular, just enough cool air and then the sun came out at the top of the pass.

Another one of those high energy, euphoric mornings. I don’t know what I did differently from past years, but I feel better physically than I ever have out here. Part knowing more of what to expect, part solving the blister and achey feet problem (for me: switch shoes to Salomon Ultras, cave and buy the Injini toe liners AND socks), partly doing manageable miles (9-14) to start. And honestly, partly finding a squad on trail to lift your spirits. Between my dudes and new friends, the harder moments are easier to bounce back from. No wonder PCT hikers describe the sacred camaraderie amongst their class. 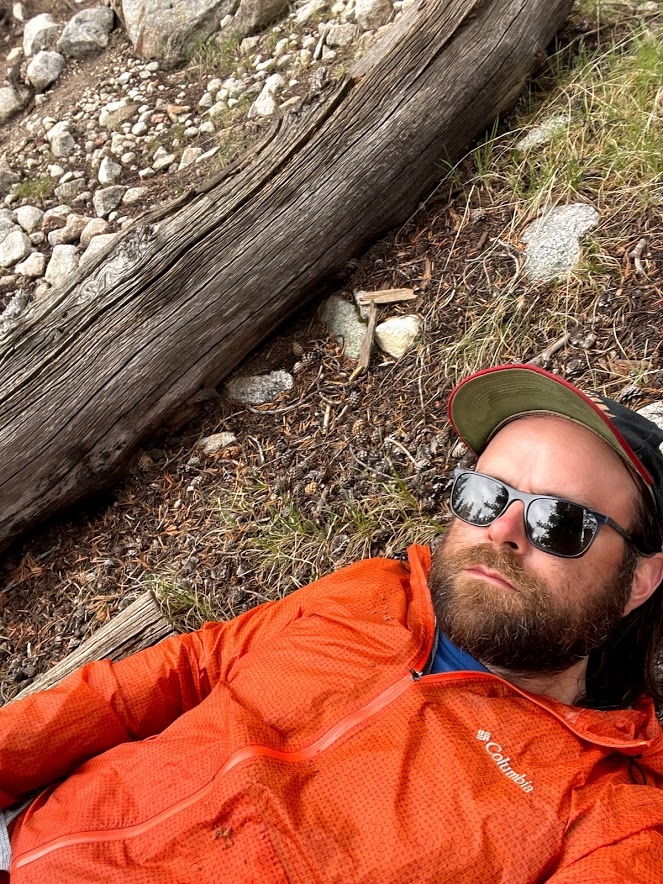 the man. the myth. the legend.

Fellow travelers were also in a good mood after days of thunderstorms…which kicked in again after a sunny lunch and so these ducklings huddled near the ranger station and hoped for a clearer morning. Heard news of a curious bear after Pinchot… 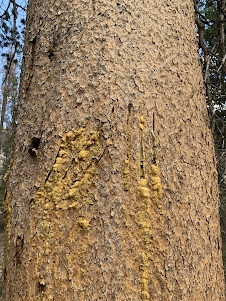 I mean, what could go wrong?!?

At the moment, laying in my tent as the rain falls in a meadow with this motley crew. Thinking about it being 100 degrees in Lone Pine and drinking a beer poolside after we had a big meal and a shower… 4 days más, savoring every moment.