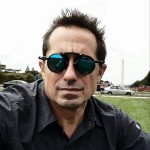 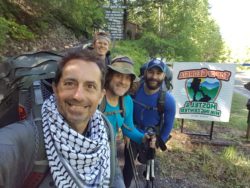 The 4 Amigos, Myself, Scrambler, Snorelax, and Red Bull, left together the Top of Georgia Hostel, to hit our first state crossing going into North Carolina. It was a late start, a very late start. Snorelax was still not even dressed at checkout time, which was one hour after the last shuttle. Not that a half mile walk uphill just to get back to the trail. A half mile, not a big deal normally, but when you don’t have to…
So we hit the trail, excited to hit our first big milestone, our first state down. It was an easy hike, mostly uphill, but not too bad. Without much excitement we soon reached the border marker. Photo ops galore! 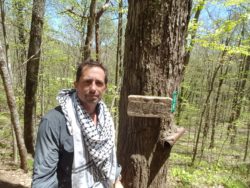 Not a bad accomplishment, I only left Springer 5 days prior, a solid pace, 78 miles and one state down. Our buoying spirits were exceedingly short lived. Our climb into NC was a slap in the face of accomplishment. We left a trail of sweat, tears and broken dreams to the top of Courthouse Bald Mountain. With our late start and crushing entrance into NC, any hopes of logging a decent day of miles was crushed. So we camped at Muskrat Creek Shelter after a short 12 mile day.
At MC we set up tents, they are warmer than sleeping in the shelter, plus no rodents. After dinner we had a fire, there were a fair few people there. Snorelax did not partake, we heard him snoring shortly after he set up his tent. The fire was the first since I have been on the trail, but it was not a great fire as everything was still damp. Soon it was time to sleep, i.e. the sun was setting.
Day 6 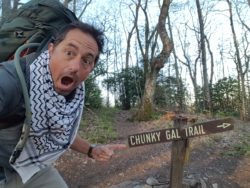 After my first good night of sleep, I woke early, about 0500. I planned to be on the Trail by 0700, so there was no rush, which was good as it was quite brisk. Breakfast, hygiene, and packing, and I was on the Trail at 0700 on the button. I planned for a 21 mile day, making it to Long Branch shelter.
The terrain was quite favorable this day, finally. I was also well rested from a good night of sleep and a short day yesterday. Without even trying I was making faster progress than I wanted to. It is easy to go fast for the first few miles, it is what kind of pace you can maintain at mile 15 to 20. But 1300, I was at the 18 mile mark, only 5 miles from my final destination. All was well, even knowing Albert Mountain was still ahead. This was the first place where I actually had to use my hands to crawl up a few spots. But it was a beautiful view, totally worth it.
By 1515, I was at my final destination, Long Branch Shelter. There was no one there, and it was quite early, and I felt great. I had met a hiker who I knew from the TOG Hostel, who had stayed a few miles ahead of us, and he said he was going to Rock Gap Shelter, just a little less than 4 miles further. I thought I would catch up and meet him there, at least I would have someone to talk to. I made it by about 1630. I immediately got an odd feeling when I got there. He wasn’t there. What was there was a pair of pants and shirt hanging from hooks like they were out drying, a half smoked cigarette on the picnic table and some trash. My spider senses were going off. I pulled out my phone and checked Guthook’s Guide (a great app that covers every detail of the AT), and there was a symbol when I oppend the detail on the shelter, that I had never seen before, a yellow bubble with a red exclamation point. That sol meant Warning. No explanation, just Warning. I threw my pack back on, and stepped out quickly. I decided on the spot that I was walking more than 25 miles today, and pushing on to Winding Stair Gap, which would bring my mileage to a bit over 30 for the day. I had no choice, there was no camping between the two spots. I figured I would try and get into Franklin NC a night early.
The original plan was that I would be into Franklin Tuesday morning, a few hours ahead of the remaining Amigos, get a room and wait for them to get here. Well no plan survives the first encounter with the creepy shelter intact! I pushed hard and caught up to two girls that were going to head into Franklin that night as well, just as I got to WSG. It was a good thing. The 1st rule of getting a ride into town while hiking the AT, Be a Girl. The 2nd rule of getting a ride into town while hiking the AT, be with a girl. They had Australian accents, were young, and attractive. They threw out there thumbs and cars could not pull over fast enough. Three in a matter of seconds. They said they were looking for a ride into Franklin. A guy in an SUV said he could take them. I waved and said “Room for one more” with a smile. He looked and shrugged, “Sure” with as little enthusiasm as he could muster. I was nonplussed, I just pulled a 30 mile day and was heading to a bed!
The women turned out to be from New Zealand, and we had a good chat about the trip Kristina, my significantly better half, took there last year.
I arrived at Haven’s budget in, got hot shower, some Cokes, and junk food, and laid down, at which point my body decided to produce a surge of endorphins. This was great, because the last thing I wanted to do was sleep!
Day 7

Today was a Zero Day, a day on the Trail where you do zero miles of hiking. I had the room and was awaiting the remaining Amigos to call and say they were at WSG ready for the shuttle.
They arrived, we went to lunch and had some beers. At lunch, as we wrapped up eating, one of the waitress, not ours, came to the table while on the phone and said, “are you Red Bull” to Red Bull. We were all speachless. How the? What the? Why the? Well, it turned out to be Red Bull’s birthday, and his mom follows his location on Google maps (yes, that is a thing for all you aspiring stalkers), saw he was at this restaurant, called a paid all of our bills! Then we went to the Outdoor 76, outfitters for a resupply and refit, and received a doctorial dissertation on feet and shoes. Scrambler was having some issues with one toe. He ended up getting a new pair of shoes. Great guy, a real expert, no sarcasm at all!
We then ended the night with a beer at the Lazy Hiker! Tomorrow it is back on the Trail and heading toward the Great Smoky Mountain National Park!

Salutations fellow wanderers and followers, fans, friends, and families of wanderers! Our's not to reason why, Ours but to hike and die, Up the Appalachian Trail, hiked the 2017 thru hikers. (With apologies to Alfred, Lord Tennyson). My ambitious plan is to start a NOBO the first week of May, take one week off in mid June, and finish by the first week of September. I will either succeed greatly, or fail spectacularly, either way, it should be quite entertaining and exciting. I am 47, retired military, working on my MBA, a book, and of course a hike! RLTW