I first heard about the Bay Area Ridge Trail a week after returning to California from my Appalachian Trail thru-hike. Lost in that post thru-hike daze and searching for concrete things I knew I should be doing (and got me out of the house), I went to REI to buy pack wash so my pack would stop smothering my room with that thru-hiker musk. After checking out, I noticed a huge banner next to the exit, advertising things I ignored in favor of staring at a huge, wall-sized map of something called the Bay Area Ridge Trail. I stared at the map of the 550-mile loop around the Bay that I had somehow missed the existence of, despite the first section of it opening before I was born.

How had I missed this trail in my own backyard? At no point was it ever more than 100 miles away from where I was living in the South Bay. It passed right next to my old job in San Francisco. It included all the parks and trails I had spent the months leading up to my thru-hike wandering around on. It was like a thru-hike made for me. I half wondered if I had somehow thought it into existence.

In all my excitement, I walked out of the store without actually noticing the trail was far from complete. Currently only 375 of the trail’s 550 miles are open to the public. 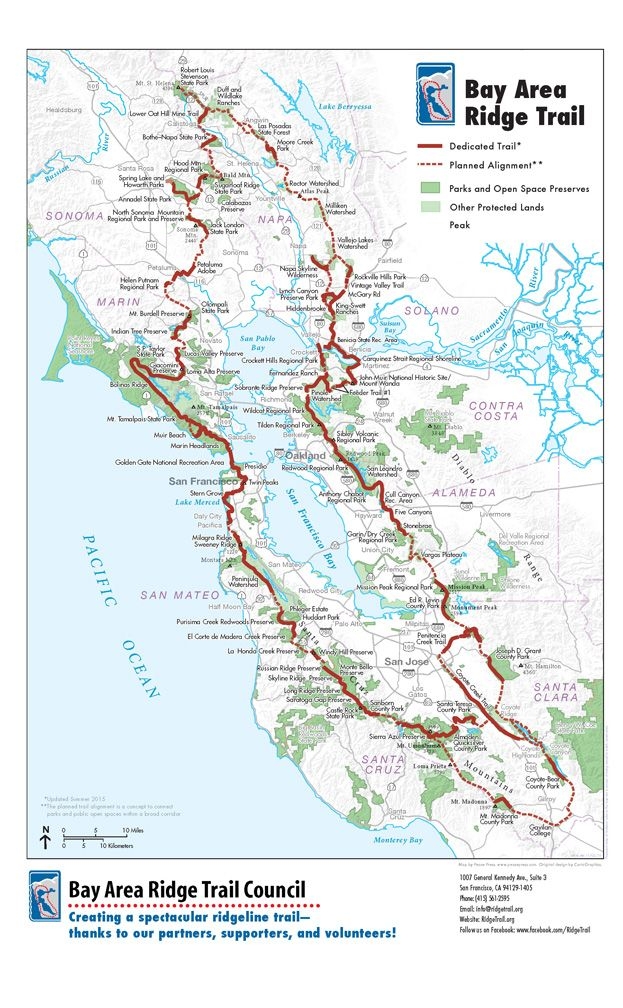 Nevertheless, the trail is still supremely exciting to me and the San Francisco Bay Area as a whole. Despite the Bay Area being highly occupied, a lot of land within it is protected and set aside for recreational use. And people around here do use it. A lot.

I love hiking around the Bay Area. I’m sure a lot of people outside the state are not quick to think of the Bay as any kind of outdoor destination with the Sierra looming to the east. And true, it’s pretty rare to have a view around here that doesn’t include some cityscape and a bridge or two. The mountains do not grow especially tall or majestic. Nowhere is lonely or wild or uninhabited. But the Bay Area still has so much to offer. There is so much ecodiversity and you can go from sandy beaches to dense redwood forests to rolling treeless hills in a half a day’s hike. The weather is perfect year-round. And best of all, the outdoors is always accessible to anyone around here. When I lived in San Francisco, car-less and in one of the most densely populated cities in the United States, I could still go from my work in the Presidio (a national recreation area) and jog across the Golden Gate Bridge to the Marin Headlands if I was so inclined.

The Bay Area Ridge Trail showcases everything that’s great about Bay Area hiking, and I’ve been singing its praises since I saw that sign at REI a year ago. And I’m going to sing its praises here. Before I do, I thought I might save people some time and mention that the staff of the Ridge Trail includes a dog named Lenny. That should be all most people need to hear, and I do have a tendency to prattle on.

Where Does It Go? 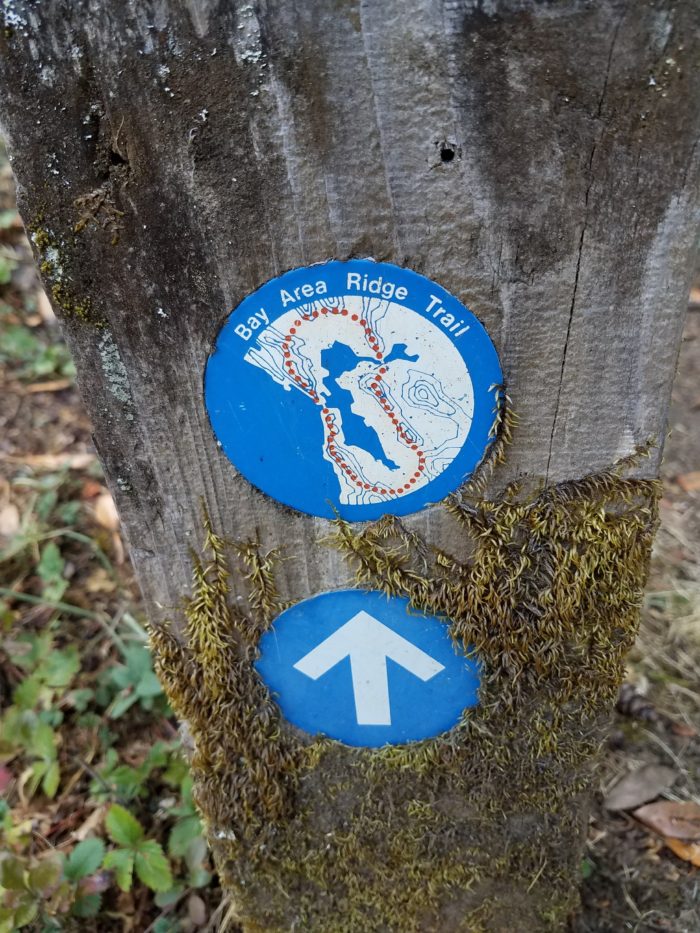 Like any loop trail, starting and ending points can be wherever a thru-hiker wants. The trail’s southern tip sits below farmland in Gilroy, known for its pervasive (and delicious) garlic aroma. Going clockwise, it travels north along the Santa Cruz mountains and up the peninsula, cutting next to the coast before taking a sharp right upon reaching San Francisco so you can go over Twin Peaks. It crosses the Golden Gate Bridge and continues north in Marin, sidestepping Mount Tam and circling around Napa. It then turns south back toward the Bay, crossing the Carquinez Strait and through the mountains that overlook Richmond and Oakland before continuing down the East Bay, over Mission Peak and past San Jose to the farmland it began in. It passes through a number of Bay Area landmarks, including the old Army base in the Presidio, Jack London’s grave, and some of the area’s most iconic redwood forests.

Where Can You Stay? 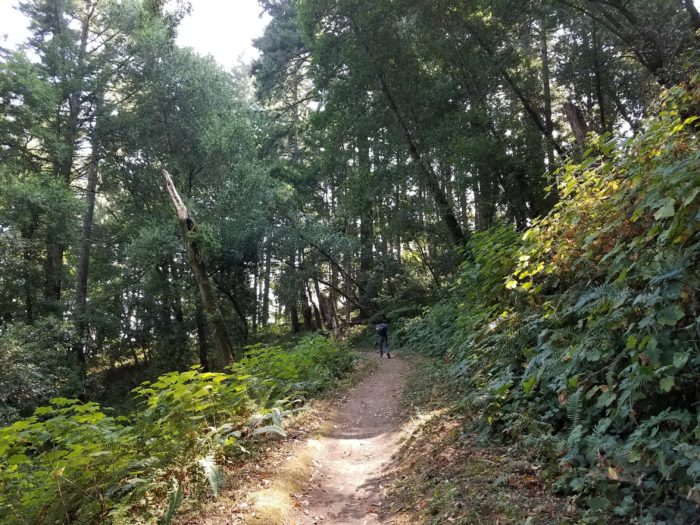 I always assumed the trail’s biggest downside was its severely limited camping options. Dispersed camping is rarely allowed in county and state parks around here, with all backpackers staying in designated backpacking camps when out in the backcountry. There are campgrounds, but more in some areas than others and not always conveniently placed a day’s hike along the route. As you travel up the peninsula, campgrounds of any kind become rarer and rarer as civilization creeps in. Eventually thru-hikers are literally walking through the streets of San Francisco—setting up camp anywhere around there is a good way to get your tent confiscated. While these stretches are hikeable in a day (San Francisco is only seven miles long), I took that to mean the trail couldn’t be traditionally thru-hiked, given thru-hikers’ inability to be in any defined place at any defined time. I reached out to the trail’s organizers to see if there were any plans to add additional camping, and was delighted to learn the eventual goal was to implement a hut to hut system—a familiar system to Appalachian Trail thru-hikers.  According to Eileen Morris, the trail’s development director, “The hut-to-hut vision is inspired by the White Mountain/Vermont/European hut systems. I assume California will put its own flair on it, so it remains to be seen if it will mirror that exactly.”

Who Will You Meet? 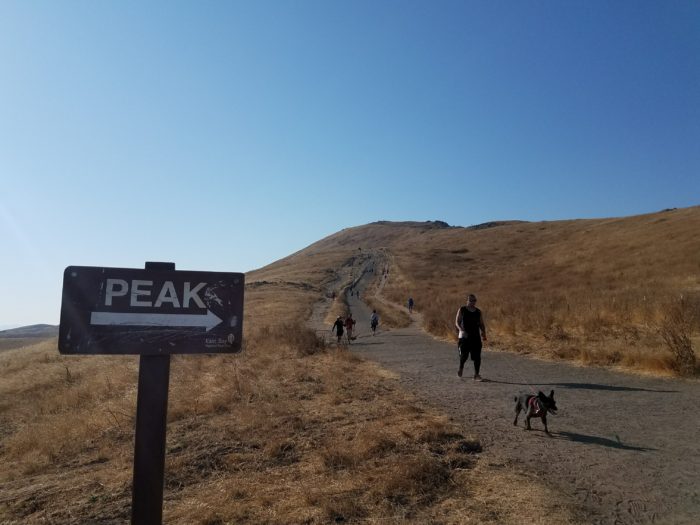 Bay Area trails are pretty well used by a fairly diverse group of recreationists (this is not a word but I’m running with it because it should be). While some of the more remote sections are traversed almost exclusively by backpackers, a lot of trails are open to cyclists and equestrians. I’ve spent the last couple of weekends day hiking already open trail and found sections lightly used by local hikers (Windy Hill Preserve), sections completely overrun by hikers of varying abilities (Mission Peak), and sections used primarily by serious hikers and trail runners  (Mount Tamalpais State Park). Areas that are difficult for day hikers to access are far less crowded. I asked people I passed if they had heard of the Bay Area Ridge Trail and found that the more crowded the trail was, the less likely hikers were to be aware of the 550-mile loop they were quite literally standing on—although having stood on it many times myself without realizing it, I can’t exactly judge. There was not a person who had heard of it that said they don’t use it regularly in some capacity.

Also, Lenny is an “unwavering proponent of dog-friendly trails.”

What Else Can You Do? 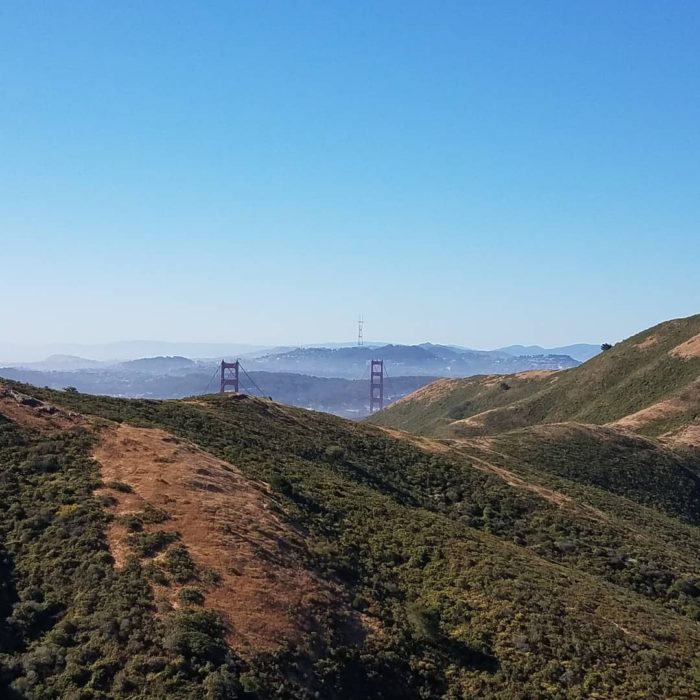 What this trail lacks in isolated wilderness it will make up for in all kinds of other random, cool stuff people travel thousands of miles and pay thousands of dollars to see. You get to walk through Golden Gate Park and over the Golden Gate Bridge! You can go wine tasting in Napa! (Please do—I love the idea of hiker trash sipping pinot noir while their packs sit in a heap outside.) Visit Muir Woods or the Santa Cruz Beach Boardwalk! You could visit the Tech Museum or snoop around LucasFilm (which is to say you can go look at the outside. People do it!). The trail can easily be your one-stop-shop for all your Bay Area tourist trap needs.

The Bay Area can be very expensive if you’re not thrifty, but both San Francisco and Oakland are international travel destinations and have quite a few relatively inexpensive hostels. They are conveniently equidistant to each other in trail miles, allowing for at least a couple days to stop and see the man-made sites.

Also, Lenny has “13 years of experience in wilderness and urban trail trotting and running.” 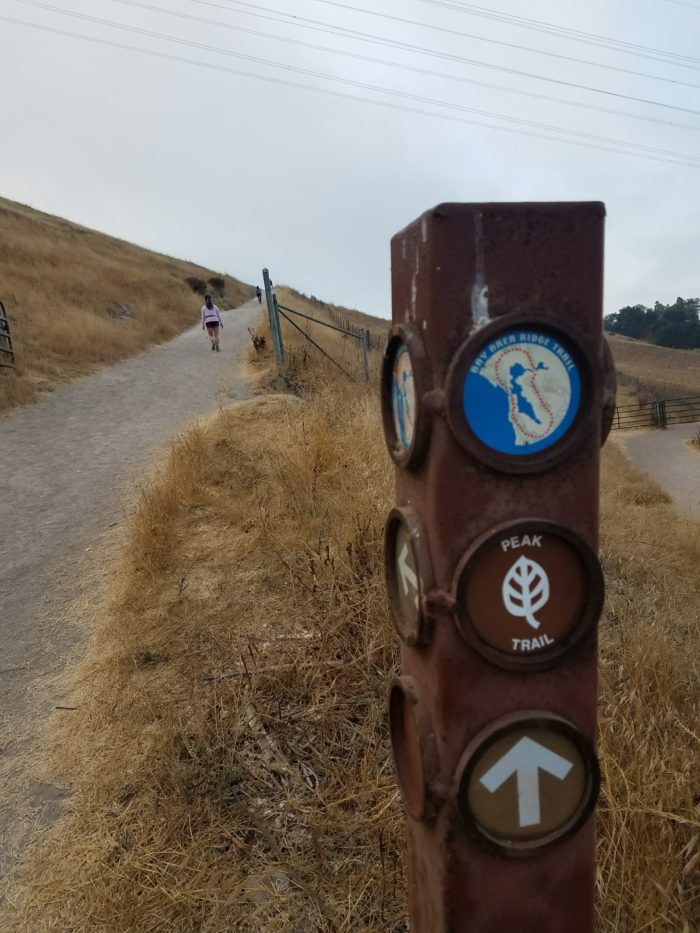 If I’ve totally sold you on this and now your only question is when are all 550 miles open in their full thru-hikeable glory, the answer is well, not for a while. The trail’s first segment was dedicated in 1989 and by 1995, 200 miles of trail had been completed. They’ve continued to open new sections in the years since, including Mount Umunhum in September 2017, a summit previously inaccessible to the public. But progress has slowed as much of the remaining trail is on private property and will require overcoming a lot of logistical and bureaucratic hurdles. The northernmost section of the trail was severely affected by the Napa fires last year, closing huge sections of already completed trail that have been slowly restored and repaired over the past 12 months. So there’s still some work to do.

Until then, huge sections of the trail are open to the public and the public is using them. Since learning about the trail last year, I’ve finally started noticing the Ridge Trail logo on the signposts of all the trails I love and hike daily.

A lot of the language used to describe long trails is sometimes (in my opinion) excessively lofty. Much of the press and publicity surrounding this trail talks of “connecting communities” and ” giving an outlet to nature” in a very tech-centered region. While I love nothing more than to roll my eyes at unnecessarily sugary descriptions, a lot of it rings true to me. Despite living in different sections of the Bay Area my entire life, finding new sections of trails to connect and put my own footprints on has let me cover ground in the Bay Area I’d never covered, or just hadn’t given much thought to. I’ve always believed that the best way to get to know a new place is to get out and hike it. Turns out that can also be true in a place you thought you already knew.

For more on the Bay Area Ridge Trail, Danielle Ofarrell hiked a 70-mile section of the trail after her PCT thru-hike and wrote about it for The Trek here.

The Bay Area Ridge Trail website is here and includes detailed maps and planning tools for trips on the already open sections of trail.

If you’re interested in helping along a huge undertaking of trail creation and preservation, you can donate to the Ridge Trail here. If you’re a Bay Area local, you can find ways to volunteer on your local trails here.