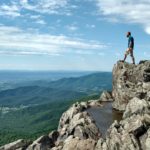 Early days on the AZT

Day one: I woke up at five a.m. after barely falling asleep last night as another guest at the crappy motel in Sierra Vista had left their hound dog all alone in their room. It howled in loneliness all night long. I triple-checked my gear through bleary eyes, got some coffee at a gas station, and took my car over to the self-storage place where I’d leave my car for the next two months, and waited for my cab driver to show up. After 30 min. of waiting without any car showing up, I called the cab company and got a generic voicemail. As my original plan to store my car in a garage at a private home and get a ride to the trailhead from the homeowner fell through, my frustration began to mount. I decided to download Uber and reactivate my account. The app asked for updated payment information, and that’s when I realized I had left my debit card in my car! If the cab had showed up, my trip would have been ruined from the very beginning. Eventually, an Uber driver came to get me, and as we took off, the driver, Frank, tells me that he doesn’t take anyone up the mountain to the trailhead, just the visitor center (the road becomes dirt after the center). I was hoping and planning for a ride all the way up to Montezuma Pass. Instead, I would be dropped at the Coronado Visitor Center and would have to hike up Joe’s Canyon Trail to get to the trail, adding additional unplanned miles and 1,656 feet of climbing to my first day’s hike. I give the driver a good tip, despite the mixup, and set my pack down on a picnic table, taking a moment to gather my thoughts. A park volunteer pulled up shortly after to run the flag up the flagpole, and we chatted pleasantly for a few minutes. He bid me good luck, and I hit the trail. After the climb up to ridgeline was complete, I stashed a bunch of water behind some shrubs and I took my first step onto the AZT, going sobo and downhill to the Mexican border. As I came down the trail, I could see the border “wall” stretching out in front of me, and the boundary marker just on the other side of the fence. I saw that a hiker was taking a few pictures, and I asked her if she would like me to take her picture for her. After some pleasantries were exchanged, she went on her way, taking her first Nobo steps on her first long-distance thru.

Access to the border on the AZT has been closed, due to border wall construction over the last two years. When I saw the border wall up close, it became obvious that the barrier was only installed because the budget was there to do it. It didn’t make logical sense, as the barrier is interrupted by thousands of feet of five-foot-high barbed wire. Conveniently, the wire was tied onto the barrier wall at such high tension that it actually made a handy ladder, which I may or may not have used to climb, with ease, over onto Mexican soil. The topography of the area makes it a really lousy place to try to sneak into the US. The AZT goes right up into the Huachuca mountains, and the terrain to the east and west is rough and water-free. The park volunteer I spoke to earlier told me that since marijuana had been legalized in AZ, there have been very few crossings by criminals/smugglers. The wall and fencing have done nothing to affect illegal immigration in any meaningful way, and the environment has been extremely impacted. Mostly by the access roads built to bring the heavy machinery in to build the barrier.

After possibly climbing back onto US soil, I re-hiked northbound back to the Joe’s Canyon trail junction to grab my cached water, worked my way over to Montezuma pass, and started the climb up into the Miller Peak wilderness. The difference in flora found at different elevations became evident rather quickly. I was delighted to meet a roadrunner for the first time as it ran up the trail ahead of me. I took that as a good omen.

The AZT does not go over Miller Peak, and at the 9.7 mi. mark, I diverted onto the summit trail, dropped my pack, and trotted up to the 9,465-foot peak. As I live and primarily hike in the North East, Miller was the highest summit I have ever hiked, and the view really was worth the extra .5 to get up there. The trail had patchy snow going up, and when I came back down to grab my pack, the trail became a bit muddy. My original plan was to camp near the first water source on trail (Bathtub spring: a literal bathtub with water piped in), but by the time I got there, I felt that I had quite a bit more energy to expend. After talking to the hiker that I had met down by the border, I decided to hike another few miles to lose some elevation, as the temps had been hovering around freezing the last few nights. I found a great campsite at trail mile 9.7, with 14.1 actual miles hiked on day one. I went to bed feeling very excited for the adventures to be had in the coming weeks.

Day Two: I woke up around one a.m., slumbering on and off til about five a.m., and really took some effort in the morning to get up. I didn’t get out of my tent till seven and really took my time getting ready, somewhat expecting the only other hiker from the previous day to catch up to me. Around 8:40, I realized I should probably get going. The trail started coming down from over 8400 feet, via the Sunnyside Canyon Trail, descending to roughly 5.5k feet over 10 miles. It seemed as though every switchback had its own microclimate. At some point I met a hiker named Danimal from CA, we hiked together for a mile or so, eventually meeting another thru-hiker, Elliot, from Pittsburgh. I ended up hiking on and off with them throughout the day, eventually taking lunch together at a windmill well. I took a look down the well, saw water about 10 feet down, and no way to get to it. Fortunately, the nearby creek still had some trickles. We then continued on with talking and walking for a time. By the time I got to a good campsite, my new friends and I decided to call it a night, camping a safe distance from a small wash. My slow start this morning put me behind “schedule” and made me needlessly worry about making up miles. I was quite tired, the sun started to go down, and suddenly, my worries set with the sun, just beyond the horizon. The Canelo hills roll on.