Fall comes early to the Dolly Sods Wilderness, a windswept plateau astride the Allegheny Front in West Virginia’s Monongahela National Forest.  With elevations reaching 4,700 feet, the climate and vegetation of the area resemble Canada more than the mid-Atlantic zone.  Autumn colors come to “The Sods” about three week before Washington, DC.  Impatient for fall color and eager to get in some backpacking before the winter, I headed west on I-66 past Front Royal, VA, and onward to the Potomac Highlands south of Petersburg, WV. 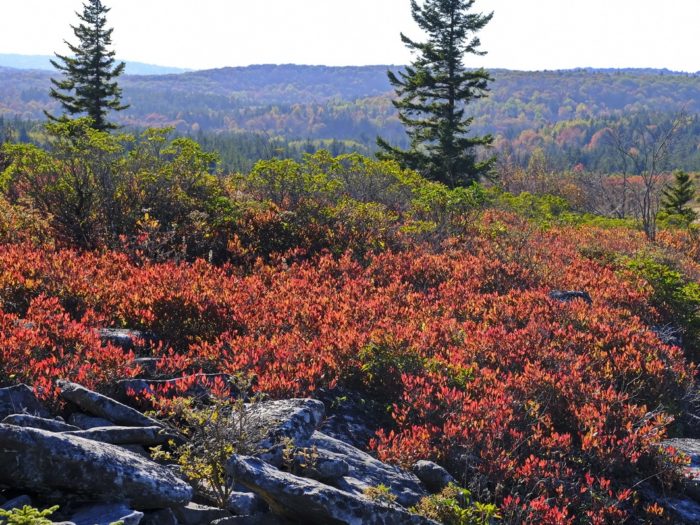 I stopped in the Forest Service office for a map and asked the ranger if special precautions were needed due to bears.  “Hanging your food is recommended,” the ranger said, “though there hasn’t been too much reported activity.  In the summer a couple lost some food that they left scattered around, and a bear got the blame, but I think it was a raccoon or skunk.”  South of Petersburg a small Forest Service sign points the way though a narrow cleft in the mountain, which opens to a long valley of small farms and houses bordered by steep wooded slopes. The road turns to dirt after passing a revival hall of carefully layered stones and climbs through dense deciduous forests to the Bear Rocks trailhead.  This mountain is the Eastern Continental Divide, separating waters flowing to the Atlantic Ocean and Mississippi River and Gulf of Mexico.

A park-like expanse of red heather bordered by stunted spruce spreads to the west.  Shouldering my 35-pound backpack, regretting I had not taken the time to pack lighter, I headed down the Bear Rocks Trail.  My hiking companion, Silvester the dog, a feisty little Westie, romped gleefully in the cool air.  After a late start and long drive, it soon started to get dark so we made camp near the first stream crossing, a little more than a mile down the trail.  A lone hiker with a headlamp wandered by and Silvester let out a rumbling big dog growl.  Would that growl impress a wayward bear, I wondered.  I threw a rope over a high tree branch and hung the food far out from the trunk, just in case. 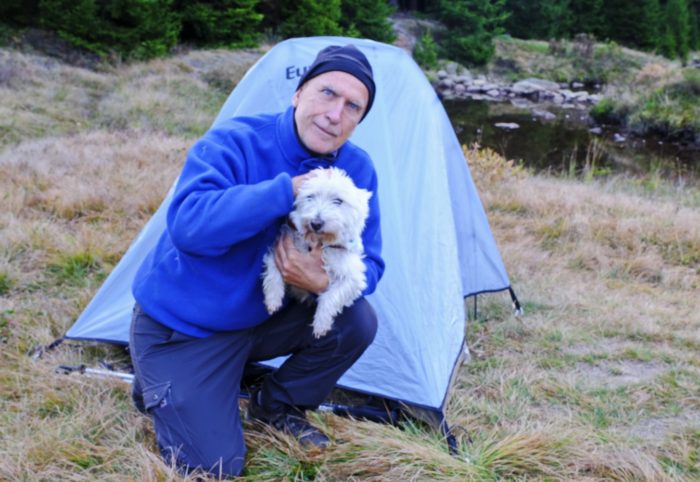 After a non-backpacker’s breakfast of fried eggs, we headed to the northern and western edge of the plateau.  The trail meanders through clumps of birch and maple and wide areas of red heather.  The birches were mostly still green, with spots of yellow, and some of the maples burst out in stunning oranges and reds. 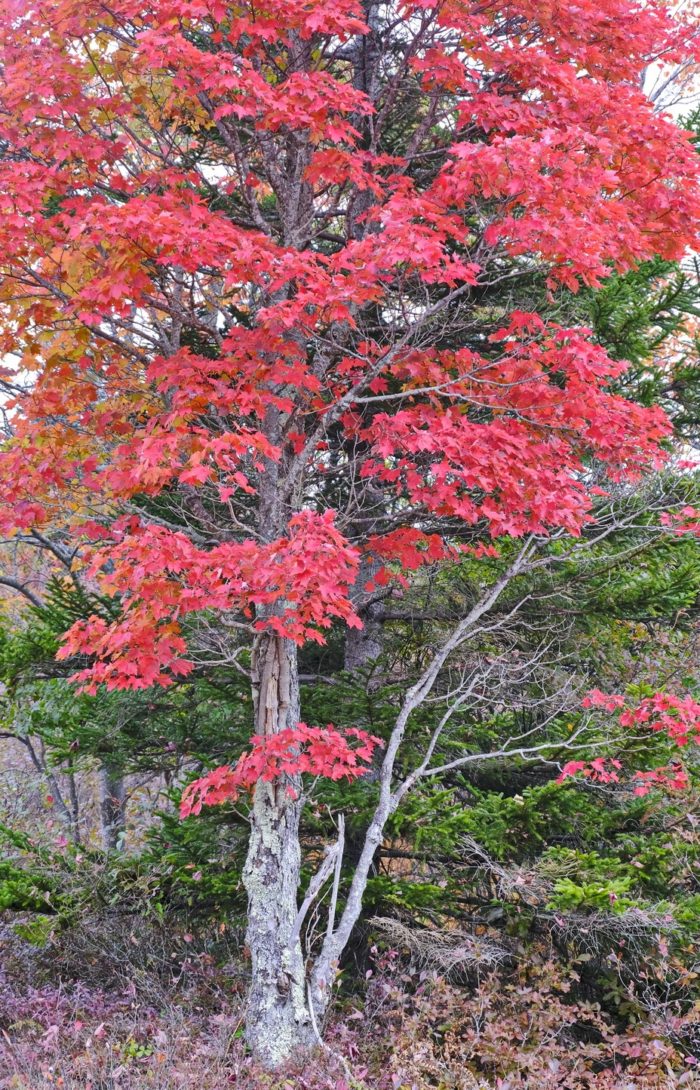 The rocky western rim of the plateau provides spectacular views into a valley of small farms.  At one point, after running over bare rock, the trail became several small tracks that ended in dense forest.  I backtracked to the rocks to have lunch and contemplate the next move.  “Maybe someone will come by who knows the trails,” I thought.  Sure enough, a solo backpacker came by. “After the rocks, the trail goes down below and west of the ridge, not on the ridge,” he said.  Hallelujah!

Coming down from the western ridge, it took awhile to reach a camping spot with a stream for water.  No tall trees here.  I took the food bag into the tent.  At least raccoons, skunks, and chipmunks wouldn’t get it, but would I have to wrestle a bear for it? 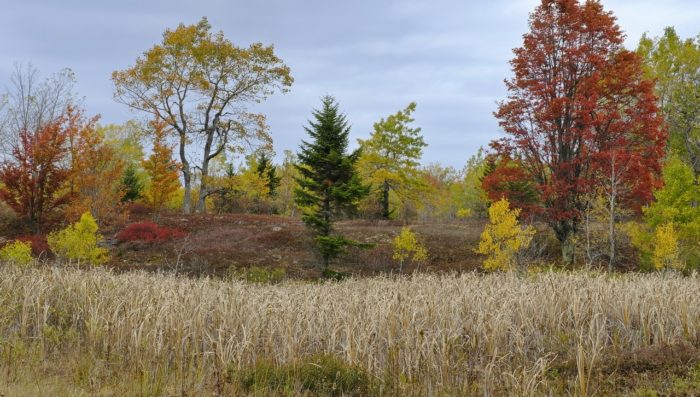 After an uneventful night and a few hours hiking we reached the central area of the Sods, a boggy place with many beaver ponds.  The trail ran right into a beaver pond.  No choice but to bushwhack!  After an hour of struggling through alder thickets and muck the trail appeared again.  In less than a mile it disappeared into a beaver pond again, for good.  This was tough bushwhacking, roughly parallel to the valley where the trail was supposed to be, trying for heather and meadows, even boulder fields, rather than alder thickets and bogs.  One time my leg sank down past the knee in a crevice.  A marked trail finally appeared, a couple of miles from where I intended to be.  No matter, a few miles on trial are easier than a mile of bushwhacking.  We reached the car with an hour of daylight to spare. 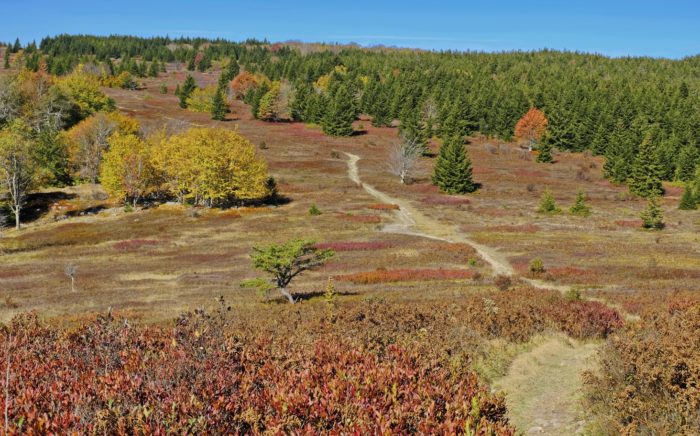 Back home, reading the Forest Service brochure on Dolly Sods, it said to always stay on trails because the area is littered with unexploded ordinance from World War II-era live fire exercises.  Luckily, I didn’t encounter any ordinance—and I had an even bigger adventure than I realized at the time!

Henry Egghart is a hiker, photographer, and sometime lawyer.  After living and hiking in the Reno-Lake Tahoe region and Utah and trekking in Nepal, Austria, and Patagonia, Henry is rediscovering and plotting longer and longer hikes in the rounded, tree-covered East Coast mountains where he first discovered the outdoors.