East vs. West: A Comparison of America’s Hiking Landscape

A scientific analysis of hiking across America

*Disclaimer: I haven’t actually backpacked across America, just in different areas. I grew up in NH and moved to MT a few years ago. The majority of my hiking/backpacking back east was in the Presidential Range in NH and on the New England portion of the Appalachian Trail. My hiking out west has been mainly in Yellowstone National Park backcountry, and the Bridger Range / Spanish Peaks of southwest Montana. The California and Utah deserts might make an appearance too. This should probably be called New England vs. Montana.

East: Unless you’re trekking around the urban hubs on the east coast, you’ll be driving for a while to get to the mountains. While decidedly beautiful and totally worth it, the eastern range can be difficult to access. Living near the Blue Ridge Mountains or areas further south will help this conundrum, but at least in the northeast, the mountain towns are small and you probably don’t live in one.

West: Plop down in anywhere out west and you can probably see a mountain range or four. My current location of Bozeman is surrounded by four mountain ranges. That’s one on every side. Not every town can claim this, but if you find yourself out west, you’re probably near the Sierras, the Colorado Front Range, or the Northern Rockies. You can travel anywhere from five minutes to 10 hours depending on what you feel like doing. Mountains, desert, and even a rainforest (what’s up Washington) are all options within reasonable distance.

Winner: WEST. There’s just more space out here. The highways aren’t congested, and the mountains are easier to get to. It’s not the east’s fault, people just like living there for some reason, and the traffic is infuriating. 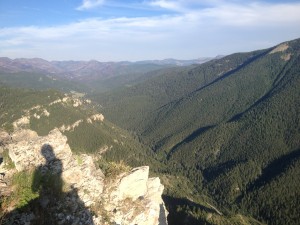 Trailhead to this peak is a 10-minute drive from Bozeman

East: The terrain through the White Mountains is burly as hell, even though the peaks only reach 4,000-5,000 feet. By the time current thru-hikers reach this part of the AT, they’ll be tough as nails and probably knocking out consistent 20-mile days. This part of the Trail can knock down that mileage though, with absurdly steep, narrow ascents over boulders, rockslides, and areas where you have to haul on trees to take a step. The descents will make you wish you had a rope and a harness. It’s exhausting, varied, and exciting. Whoever created these trails has a real aversion to switchbacks, but that’s ok—hiking in NH is never boring… or easy.

West: Bagging a 10,000-foot peak can be done in a day, but we’re also starting out around 5,000 feet elevation. Switchbacks abound, and some of the trails feel wide as a four-lane road. Through numerous volunteer projects and nonprofit groups, most trails are well-marked, ergonomically laid out, and drained so they don’t turn into streams during spring runoff. There are plenty of gnarly, scree-filled mountains to climb (see below), but most of the trails out here are steep, but planned.

Winner: EAST. While it’s nice to go on a hike and feel confident you won’t be helicoptered out with a broken ankle, the insane terrain in New England is exciting, and you can curse the individual who felt it acceptable to direct a trail straight up the flank of the mountain with 1,200 feet of elevation gain in 3/4 of a mile. 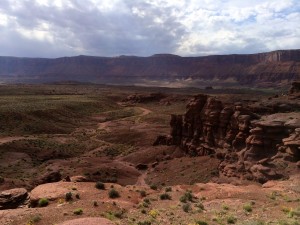 The desert is way more interesting than most people think. 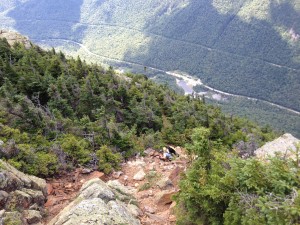 Hiking the AT? You’ll climb this monster once you hit NH.

East: No matter where you want to hike around New England, you’re in for a tough ascent and a slow, careful descent. There are a few family-friendly mountains (Monadnock, Blue Jobe), but for those looking for a hike that won’t send you tumbling down the mountain with one misstep, you should probably drive down to Virginia.

West: Well, what do you feel like doing? A one-hour trail run? A day hike with a 10-mile approach and an 11,000-foot peak? A week spent hopscotching alpine lakes with a trailhead 50 miles from the nearest town? You got it. Everything a hiker or backpacker can dream of can be found out west, whether you’re a crazy mountaineer or you’re looking to take the family Chihuahua out for a jaunt.

Winner: WEST. With the wide array of adventuring choices, it’s no wonder the folks out here wear base layers to work and commute with a 60L Osprey pack. You never know when the next opportunity might pop up. 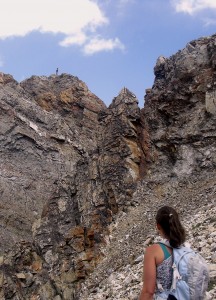 One of many terrain options out west. Now how do I get up there?

East: Once I saw a black bear on the trail, and I almost hit a moose driving to a trip in Maine. But aside from squirrels, nonthreatening snakes, and super-cool birds who eat out of your hand, there’s not a ton of critters to see out here. That’s ok though, there’s always the National Geographic Channel.

West: The wildlife is terrifying out west. Think wolves, grizzly bears, enraged mother elk, and angry bull bison. Everything from being chased down the trail by a demented badger to setting up camp while clutching bear spray after encountering fresh grizzly poo on the trail, to getting lost running away from charging bison can (and will) occur if you venture off the blacktop. Also: I almost stepped on a rattlesnake in Moab last week. There’s a lot of animals to see out here, and people drive cross country in rented RVs just to get a glimpse of the amazing array of wildlife. Not me though. Seriously, I’m fine with National Geographic.

Winner: EAST. I know it’s a lame choice, but I wrote this, and by the way it’s not scientific at all. I am terrified of wildlife, and I want to sleep blissfully in my tent without freaking out at every noise, waiting for a bear (or badger) to eat my face. 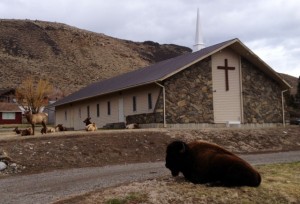 Ughhh bison get outta my faaaace 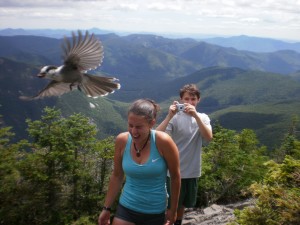 White Mountains: where the birds eat off your head.

East:  Oh man, I hope none of you get caught in bad weather on top of Mount Washington. I’m a fair-weather everythinger, but you can’t possibly, possibly plan ahead enough for hiking in the northeast alpine zone. It will be sunny and 75 at the trailhead, and be 20 degrees, socked in, and sleeting by the time you get above treeline. Unpredictable in every season. Further down the eastern seaboard sees more predictable weather and more tan people. I hear they get the bulk of the sunshine. PS don’t miss autumn in New England—it’s nature’s rainbow (cute).

West: Each season is predicable, plus you have the added bonus of seeing weather coming in 100 miles away. The desert is hot and dry (watch out for flash floods), but it starts snowing in Montana and Wyoming around September and doesn’t stop until June. Spring doesn’t exist—it’s actually called Sprinter, which is a cruel combination of foreign words like “April” and “May,” with snow, sleet, and a random 60-degree day thrown in to mess with your head before the next hail storm. Summer is great, but lasts all of eight weeks before it starts snowing again. Colorado is nicer than MT by the way.

Winner: TIE. As a fair weather outdoors person (AT should be interesting next year) I get annoyed when bad weather ruins my plans, or terrified when I’m caught in a socked-in storm on top of a mountain. Lesson: get over your fear, Maggie. 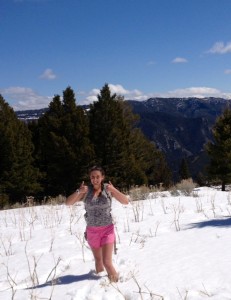 Classic May hike in Montana. 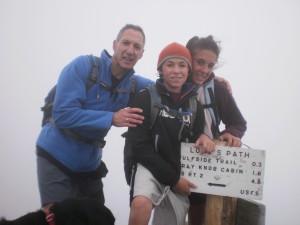 On the other hand, here’s a beautiful summer day atop Mt. Jefferson in NH.

East: It’s called the Green Tunnel, yo. A lot of trails on the East Coast will find hikers below treeline. This is beautiful though—old-growth forests are breathtaking and look like something out of a fairytale. Plus, when you spend so much time in the trees, breaking treeline or reaching a bald is especially exciting.

West: Well, you can see forever. There are forested hikes, but most backpacking trips take hikers above and beyond with views of jagged ridgelines, lush valleys, rivers, slot canyons (desert-specific), and rolling vistas… all viewed from atop an 11,000-foot mountain. 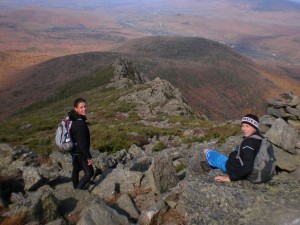 New Hampshire foliage is worth the effort.

East: While the density of people back east is overwhelming, the crowds are almost nonexistent by the time you get to the mountains. This might be due to the fact that there are so many Crossfit and Pure Barre gyms around the cities—people can’t be bothered to drive to the mountains. Popular, more accessible areas like Shenendoah get more traffic, but you can quickly bypass the crowds—they don’t stray far from the campsites.

West: Less people, more of them outdoors. It can be hard to find parking at the trailhead, and you have to venture a ways  back to escape the bearded mountain men and ridge-running women of MT, CO, and everywhere in between. This is one of the things that makes living out here so cool, but can also be demoralizing as you wheeze up a 45-degree slope, only to be passed by a young mother with a perfect ponytail pushing a jogging stroller and accompanied by the omnipresent black lab.

Winner: EAST. Somehow, even with the density of people in urban areas, solitude can be found in the mountains. And no matter how slow or ponderously you’re hiking, you’ll still feel like a baller once you hit the summit. 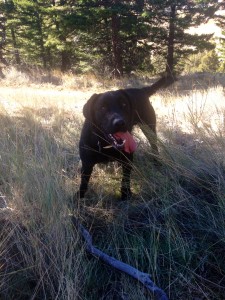 Couldn’t sneak a picture of a hot mom, but here’s a black lab.

TIE, obviously. I can’t choose a favorite. They’re both great. My experience is also in limited areas, so if you disagree with any of the points, I’m sure you’re valid. Whether your travels take you to the hills, crags, or the desert, just get out there. Any place will be better than your couch. Even if you’re watching the National Geographic Channel.