Eat, Dammit: 5 Strategies to Optimize Your Caloric Intake During a Thru-Hike

When I finished my thru-hike and sat down to write articles that doled out the hard-earned wisdom of a past thru-hiker, I decided I was not going to pass on any advice pertaining to subjects I didn’t feel I had succeeded in. Better to leave those subjects to the pros. Leave the gear lists to the people that debate every quarter of an ounce, not to the person who at one point realized she was carrying four different Chapsticks. So I sat in front of my computer, ready and eager to impart knowledge to a new generation of thru-hikers (whether they wanted it or not), and realized this ruled out basically every subject I could possibly talk about.

No one succeeds at all aspects of thru-hiking in their first thru-hike, regardless of how many of these handy articles you read. So instead I decided to try a new tactic. What I should do is talk about subjects I failed at the most. Those, I knew inside and out. I had learned (eventually) how to succeed at them, but I also intimately knew the things you should NOT do.

The most obvious of these subjects: eating.

Eating. It seems so simple. But while you’re thru-hiking it can be very challenging. I spent the vast majority of Massachusetts convinced I had Lyme disease. I had a pounding headache, was dizzy, and my arms and legs felt like noodles. My sweat felt like ice on me, even though temps were mostly in the high 80s. I couldn’t focus long enough to do basic math in my head. And I was so, so, so tired. Every step felt like the most difficult step I had taken in my thru-hike so far.

Turns out these symptoms are not just part of the smorgasbord of things that go wrong when you get Lyme. I was hungry. Not just hungry, but calorie deficient. The calories I was consuming weren’t enough to cover the amount I was burning walking 10 to 12 hours a day.

It’s estimated that you need to eat roughly 5500 calories a day while thru-hiking (although a whole host of variables need to be considered, including your age, gender, etc). That’s a lot of food. I had never actually considered 5500 calories worth of food before. It’s a lot. And it’s very heavy. And for all my brainstorming, I never really came up with a way to take it with me that wasn’t carrying it, which is important because the heavier your pack is, the more calories you are going to burn. When you’re at the grocery store, do you ever figure out how much something costs per ounce to decide what gives you the best value? Do the same thing with your backpacking foods, except with calories per ounce.  Other than that, I don’t have a lot of advice in the way of what to eat, since that’s something that will vary wildly from person to person based on taste and also oh-my-god-I’ve-eaten-pop-tarts-for-two-straight-months-and-I-will-never-look-at-a-pop-tart-again syndrome, which is also an inevitable part of thru-hiking. I do have a lot of advice in how to eat, since this is what I ended up changing the most to right the ship. 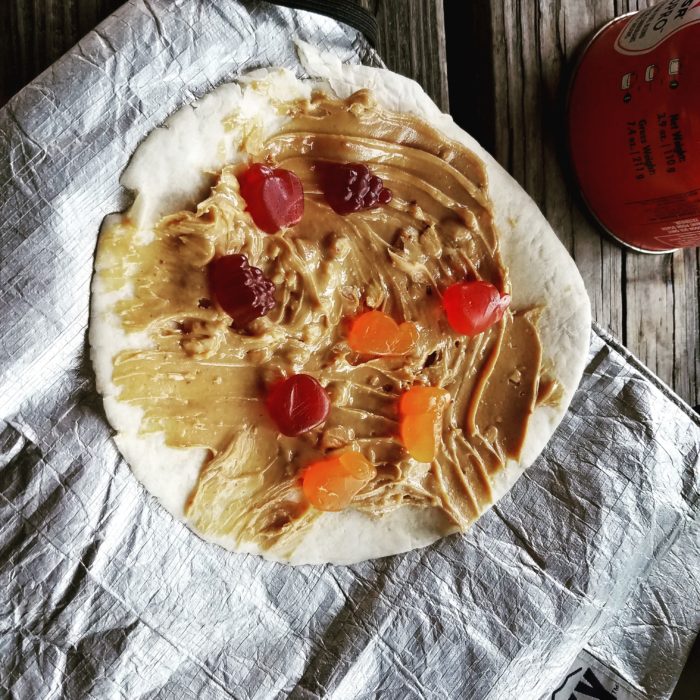 When you’re resupplying, actually look at the labels and add up the calories of whatever you plan to eat per day. I NEVER did this, even knowing I was supposed to get upwards of 5000. I just grabbed a crap-ton (that’s a scientific measurement) of food and assumed I was fine. In Massachusetts, I actually added up the calories I was eating per day and found it was closer to 3000. You are going to be hungry regardless of how many calories you’re eating, so you can’t use that as a guide for if you’re eating enough. Get a good idea of what 5000 actually looks like early on. 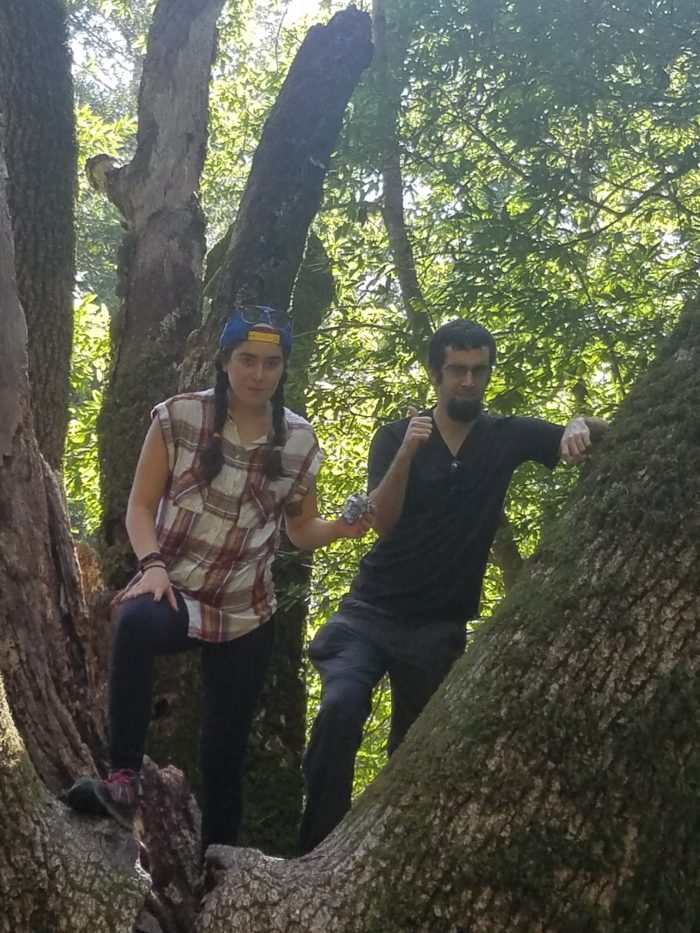 And on the go 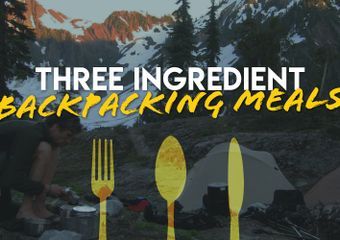 Our Favorite Three-Ingredient Backpacking Meals...For When You Hate Everything in Your Food Bag The first few hundred miles of your hike will be a blissful, face-stuffing party of Snickers and pasta sides, but soon that mail-drop of ramen and power bars sent by your…Read More

Breakfast, lunch and dinner? Banish that concept from your mind. A better eating schedule is: breakfast, second breakfast, lunch, second lunch, afternoon snack, dinner. By the end I just ate something every hour and did away with the idea of “meals” entirely. To do this, you have to master the walk and eat. Set aside your snacks for the day in easy to reach compartments and pick your spots (i.e. don’t eat when it’s really rocky or uphill). If you only eat when you stop, then you won’t eat enough on days you’re in a groove and don’t feel like stopping.

Eat even if you’re not hungry

I know, I know! Everyone always talks about hiker hunger, so you probably assume that you’ll always be hungry. But I got the flu in the Smokies and a cold in Northern PA, both of which really suppressed my appetite. I hiked through both of them, barely eating anything for the duration of each, only to crash and burn badly once I started feeling better. You can’t escape suffering the consequences of not eating while hiking for that long, even if your body isn’t telling you need food. Either force yourself to eat, or better yet, accept that you’re sick and take a couple days off, a revolutionary concept I never considered. 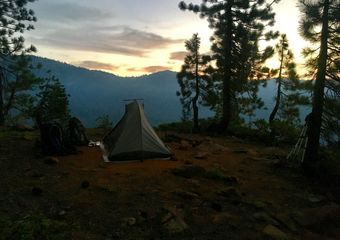 Fill The Food Bag: Trail Recipes You Won't Get Sick OfSo, you’ve decided to thru-hike a long-distance trail. Fantastic idea! Have you put any thought into what you’re going to eat for all those miles? The first decision you need to make is your resupply strategy: are you going to…Read More

As an aside: While I had that cold in PA, a friend and I stopped at Dunkin’ Donuts one morning. He asked if I wanted to split a dozen donuts, an opportunity I normally would have jumped at. But my stomach turned at the idea and I ended up buying just one and nibbling at it. For the next two weeks I spent every hiking moment (and I mean that literally) thinking about how badly I wanted one of those donuts and what a complete IDIOT I was for turning it down.

Never go to bed without eating

During the summer when the days were longest, I got in the habit of stopping around 5 or 6pm for dinner and then packing up and continuing on until the sun started to set. Then I’d set up my tent and immediately pass out in it. It wasn’t until way later I realized how bad this is for you. Your body needs something after exerting energy, even it’s just a Clif bar between setting up your tent and going to sleep. Burning its stores and then not eating for another 8 hours is tantamount to torture. 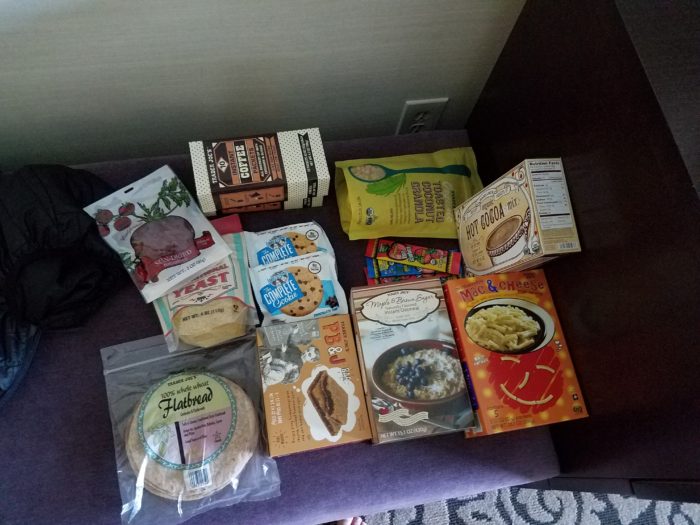 The second easiest way to boost calories while keeping your pack weight down is to resupply as frequently as possible. 3 days of food weighs a lot less than five days of food, which then gives you the luxury of carrying more food per day. At the beginning, I tried to stretch out my stints in town as long as possible in an effort to save money. But I also never considered that a stop in town didn’t have to include all the stops, i.e. resupply, laundry, shower, night in a hostel, dinner and breakfast, etc. At the end I would alternate: if one stop in town was overnight and included the whole kit and caboodle, the next would be a mid-day stop for lunch and resupply before continuing on. This also meant I got more meals in town, which is THE easiest way to boost calories (and morale). 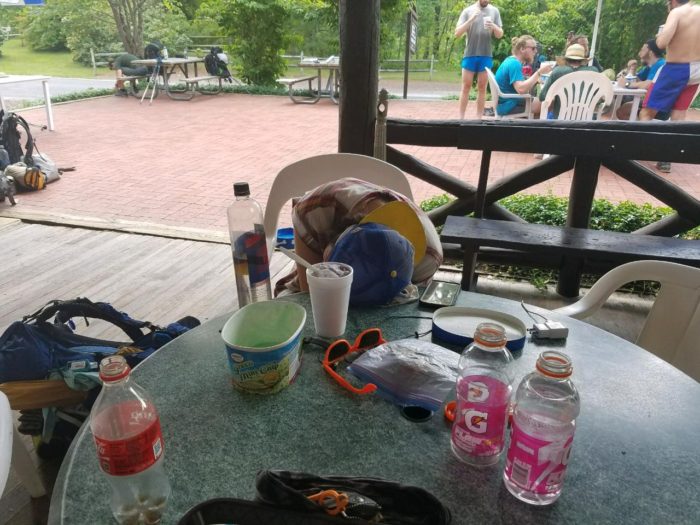 There is an inevitable amount of trial and error in a thru-hike, especially your first. Making a mistake to learn to never make that mistake again is all part of it and the biggest secret to being a successful thru-hiker is surviving lessons taught the hard way. THAT SAID: Trust me when I say you’d rather not learn about calorie deficiency the hard way. Count your calories. Eat often. Consume all the ice cream. 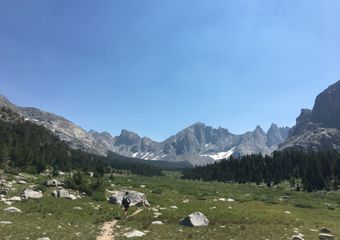 Fueling a Healthy Thru-Hike on a BudgetBesides “Do you carry a gun,” one the most common questions on trail is “What do you eat?” From battling constant hunger, to pack weight considerations, to sticking to a budget, planning your food strategy can be one of the…Read More
< Previous Post
Next Post >