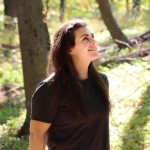 Everything Is Beautiful and Everything Hurts: Long Trail Update

On the third and fourth day of my NOBO end-to-end hike, I really started to doubt whether my body was ready for this thing. Mainly, my kneecaps wanted to secede from my legs and scurry back to New York City where the sidewalk is generally flat. But day 5 brought some unexpected highs. No pain, no gain, am I right? And the Long Trail’s beauty has yet to disappoint.

Day 3: Goddard Shelter to a Stealth Site (About 14 Miles)

The first thing we did on day 3 was climb up Glastenbury fire tower and take in some stunning views. It was my first real unobscured-by-trees look at the surrounding mountains and lakes, and there was a picturesque blanket of fog hovering over the lowlands from the early morning. We saw a bunch of beaver bogs throughout the day, and even caught the butt-end of a bear as he ran away from us—my first on-trail bear! 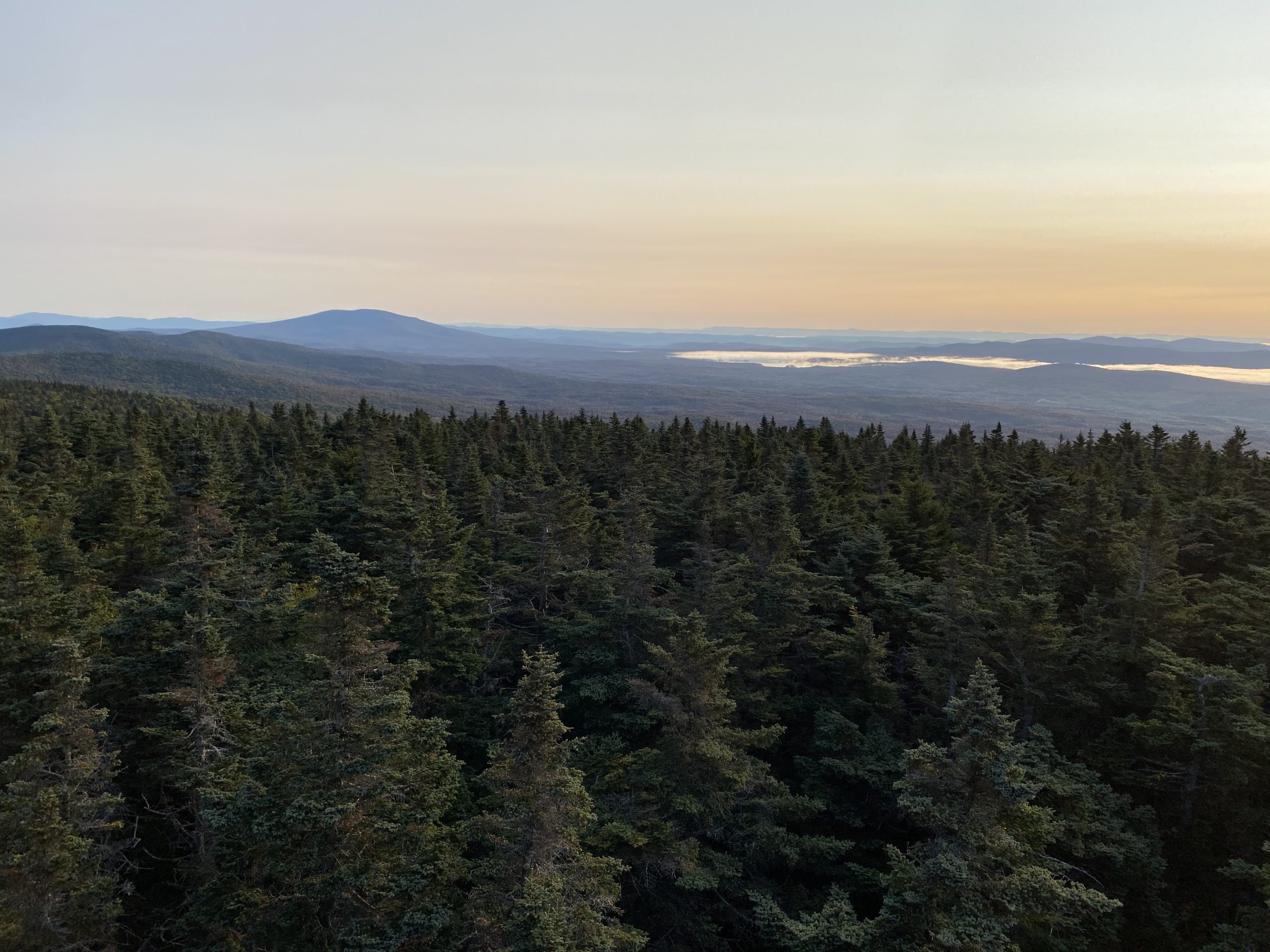 Somewhere after passing Shady Spring, the old knees started to ache from all the downhills we’d been doing. I wasn’t surprised; I spent most of my life playing softball and, as a catcher, don’t expect much from my knees these days. So, I loaded up on Advil and kept truckin’.

My hiking partner Bartman (pronounced like Batman) and I wanted to catch up with a section hiker named Phillip whom we’d met at the Congdon Shelter on day 1. He had a  plan to stealth camp just after IP Road (what does that even stand for?) and we found him chillin’ with his shoes off right about there. The three of us found a great little spot, set up our tents, and ate dinner.

Phillip is a really interesting guy and told us all about his previous trips—winter backpacking in the White Mountains, hot summer backpacking in the Grand Canyon, solo section hiking the 100 Mile Wilderness in Maine—plus, the guy is so on-point with his backpacking setup. He pre-portioned all his food based on calorie count, and has a spreadsheet for everything. A real pro.

I took some pointers for sure, and he showed me a bear bag hang I didn’t know before: the PCT hang, which doesn’t leave a line tied to a tree for the bear to swipe at. Of course, I didn’t do the cool new hang (guys, I’m bad at knots and didn’t want to make him do it for me) so I did the regular old basic bear hang.

The Saga of the Bear Bag

In the middle of the night, I heard a loud rustling and some clomp clomping through the trees; branches snapping, heavy footfalls, the whole nine yards. I was sure it was a bear—maybe more than one—and I convinced myself they’d gotten to my less coolly hung food bag. I planned in my head what I was going to do. Luckily, we weren’t far from Manchester Center, so I could hike all day and hitch in by dinner time, maybe have to stay in a hotel overnight rather than take the trip back on trail after dark.

I had a full-ass plan. But, by some miracle, when I got out of my tent in the morning my poor little food bag was unscathed! Still hanging, right where I left it! A trail miracle. With that emotional high—momentum from a narrowly avoided inconvenience—I was ready to climb Stratton Mountain.

As Miley Cyrus once said, “Ain’t about how fast I get there. Ain’t about what’s waiting on the other side. It’s the climb.” I really enjoyed the Stratton Mountain uphill, mainly because I wasn’t going downhill. Those downhills, man. They hurt. But also, everything was beautiful. The trees smelled like Christmas, the birds were singing, a grouse or something burst out in front of me on the trail sounding like a little helicopter and I laughed out loud (OK, after freaking out for a hot sec).

And then at the top of Stratton Mountain was another fire tower! I dropped my pack and climbed up for some incredible views and, of course, tower selfies. After the climb was, you guessed it, the downhill: my worst enemy at this point. I tiptoed down the rocks and roots, using my trekking poles like crutches, trying not to screw my knees up even more than they already were. At the bottom, I was rewarded with another beautiful view of Stratton Pond—which, to Bartman and me, looked more like a lake. I would build a lake house there, that’s for damn sure. 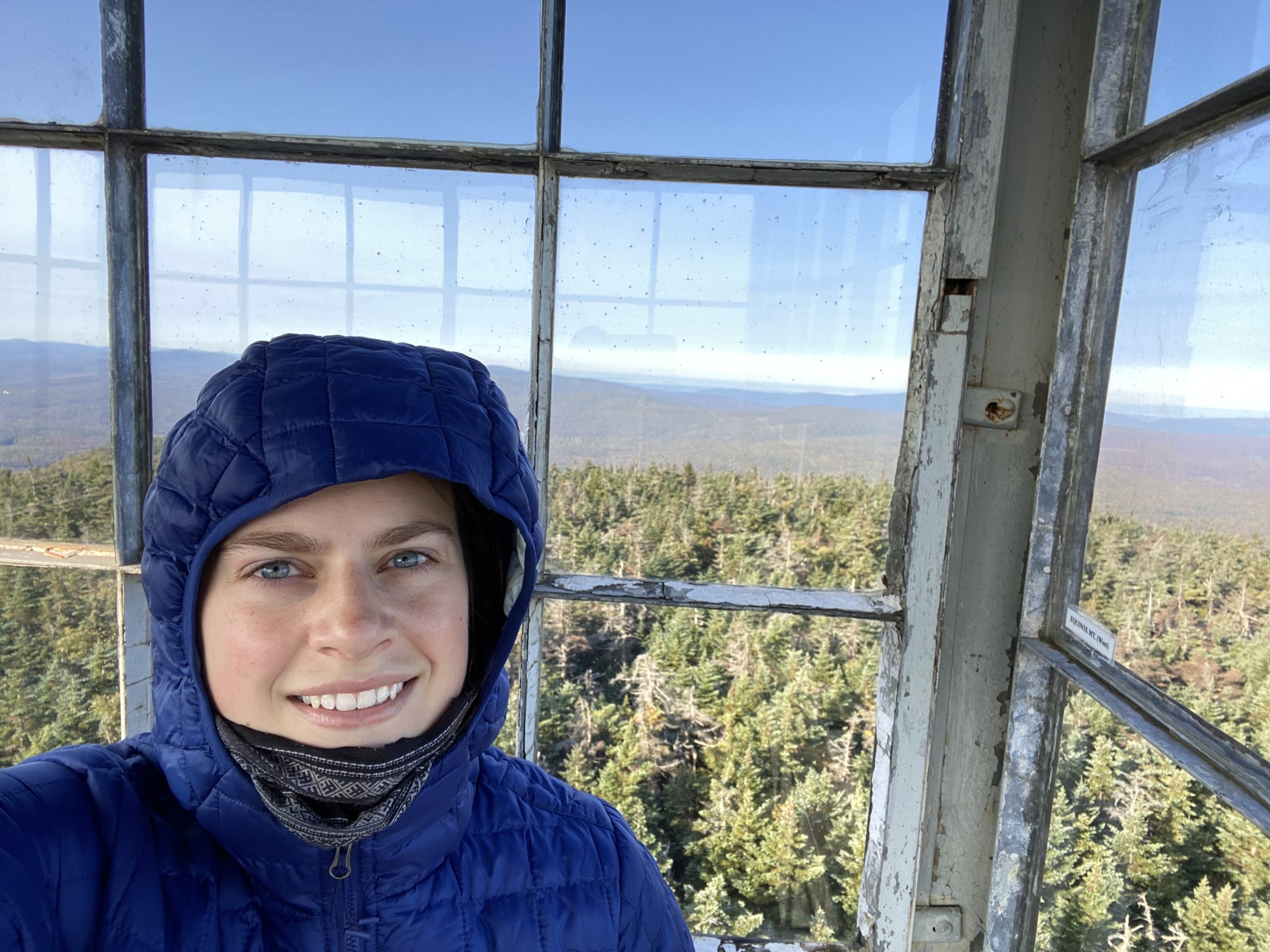 We ended our day at Spruce Peak, which is a freaking CABIN. I was really excited for this, even though the temperature was supposed to be much warmer than it had been the last few nights in my tent. But still, having four walls, a place to take a camp shower (what I call it when I use a wet wipe to scrub some of the hiker grime off my person), and a front porch to eat dinner on was not a bad way to end the day. We were joined by a couple of southbounders, Graham and Twinkle Toes, who told us that in the northern section there are indeed some flat parts. 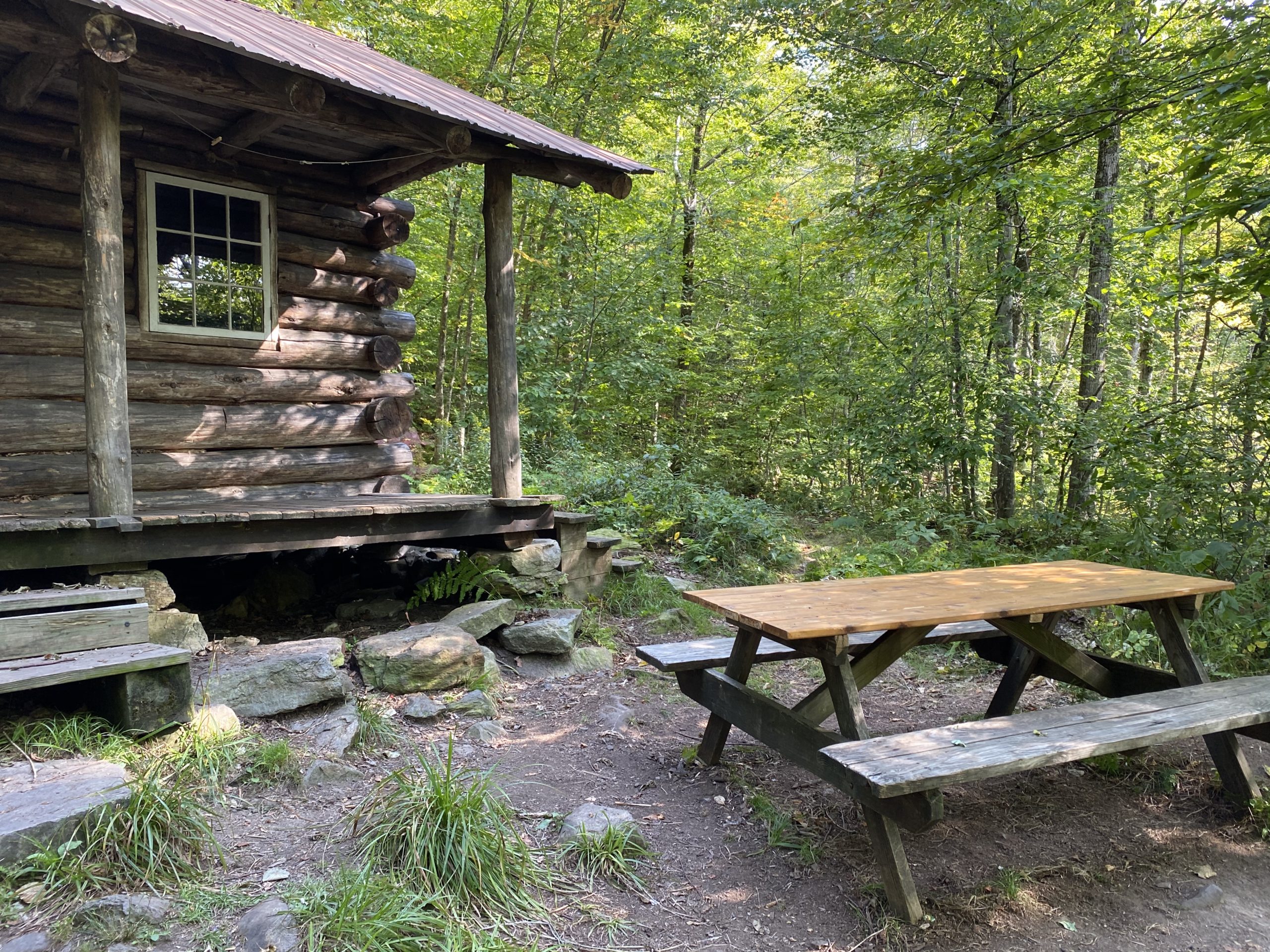 This was a relief, but I wasn’t quite sure I believed it. I was still trying to figure out how I was going to finish this thing with two bum knees, more rugged terrain ahead, and the days getting shorter. But, as Bartman and Samwise Gamgee once said, “There is nothing for it Mr. Frodo.”

After a pleasant sleep in the Spruce Peak shelter, we booked it to the nearest parking area where we could hitch a ride into Manchester Center for our first resupply. I’ve never hitchhiked before, but with both of us wearing our masks and standing so close to a parking lot where people could easily pull over, we got picked up in less than 5 minutes by a nice lady named Cathy. We rode in the bed of her pickup truck the few miles into town, and she let us out near the local Price Chopper. I was excited to pick out some new food options, although my first four days of food was pretty great and I still had a bit left. 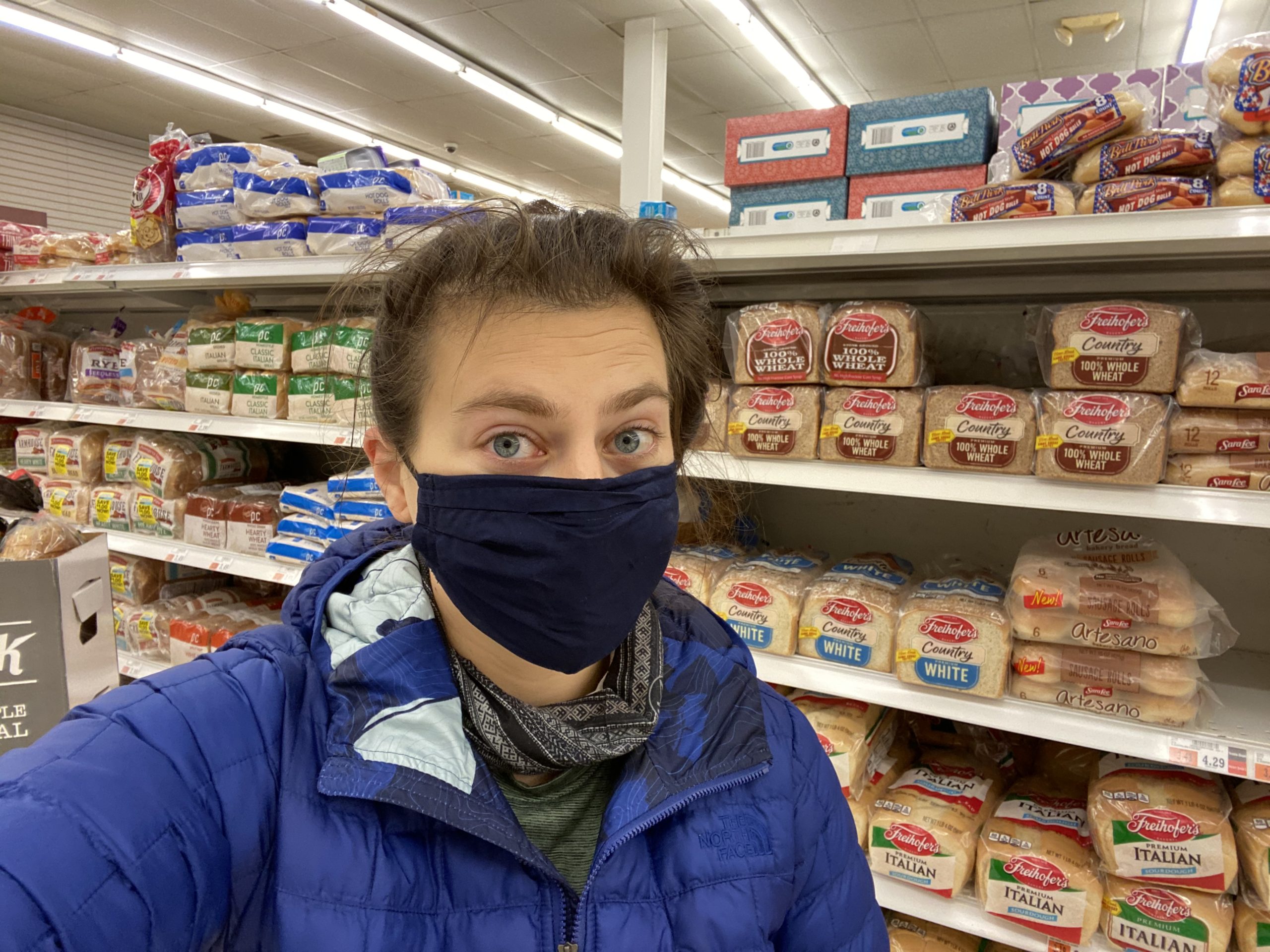 Looking feral in this Price Chopper.

If You’re Hungry and You’re Reading This, Get a Snack

The Price Chopper cashiers recommended a cute bagel place across the street called The Works, which we couldn’t pass up. I got an everything bagel with bacon scallion cream cheese and devoured that thing like an animal, along with a large frozen coffee beverage. Bartman needed a new water filter, so we hit up The Mountain Goat outdoor outfitters next. The employees there were super friendly and helpful (like all Vermonters I’ve encountered thus far) and had held a Sawyer Squeeze for him after we called the night before asking if they had any in stock.

The best thing I got in town, though, were some knee helpers. I limped over to the Walgreens, powered by bagel and coffee, and got me some knee braces! I’ve never used braces before and had no idea what to get, but let me tell you, the ones I ended up with are magical. They turned walking downhill from dreaded hot-knife-stabby pain into something annoying, yet bearable. The best 35 bucks I ever spent! I also got Biofreeze and Aleve to add to my ever-expanding pantry of first aid/pain relief, which should help sustain me for all the seemingly endless downhills in my future.

As we were walking out of town back toward the trail, another lovely human pulled over and let us hop in for our second seamless hitch. He was an NYC expat living the Vermont dream, and we talked about how many New Yorkers are moving out to Vermont because of the pandemic. We thanked him for the ride and as he pulled away, I checked my phone and realized it was only 10:30 a.m.. We still had all day to get some miles in!

A New Lease on… Knees

What we thought was going to be a nero (near-zero-mile day for my non-hiker peeps) turned into a successful 13-miler including a few summits. First was Bromley Mountain, which wasn’t too bad of a climb until the top, where it became grassy and steep. It felt like I was climbing up a ski mountain—and that’s exactly what it was. We walked by the machines that make the snow, and some helpful signs that basically told us we’d been going up the “easiest” slope, which felt like a bitch slap. At the top, we hung out for a quick snack break at the ski patrol hut and took some photos before heading down. 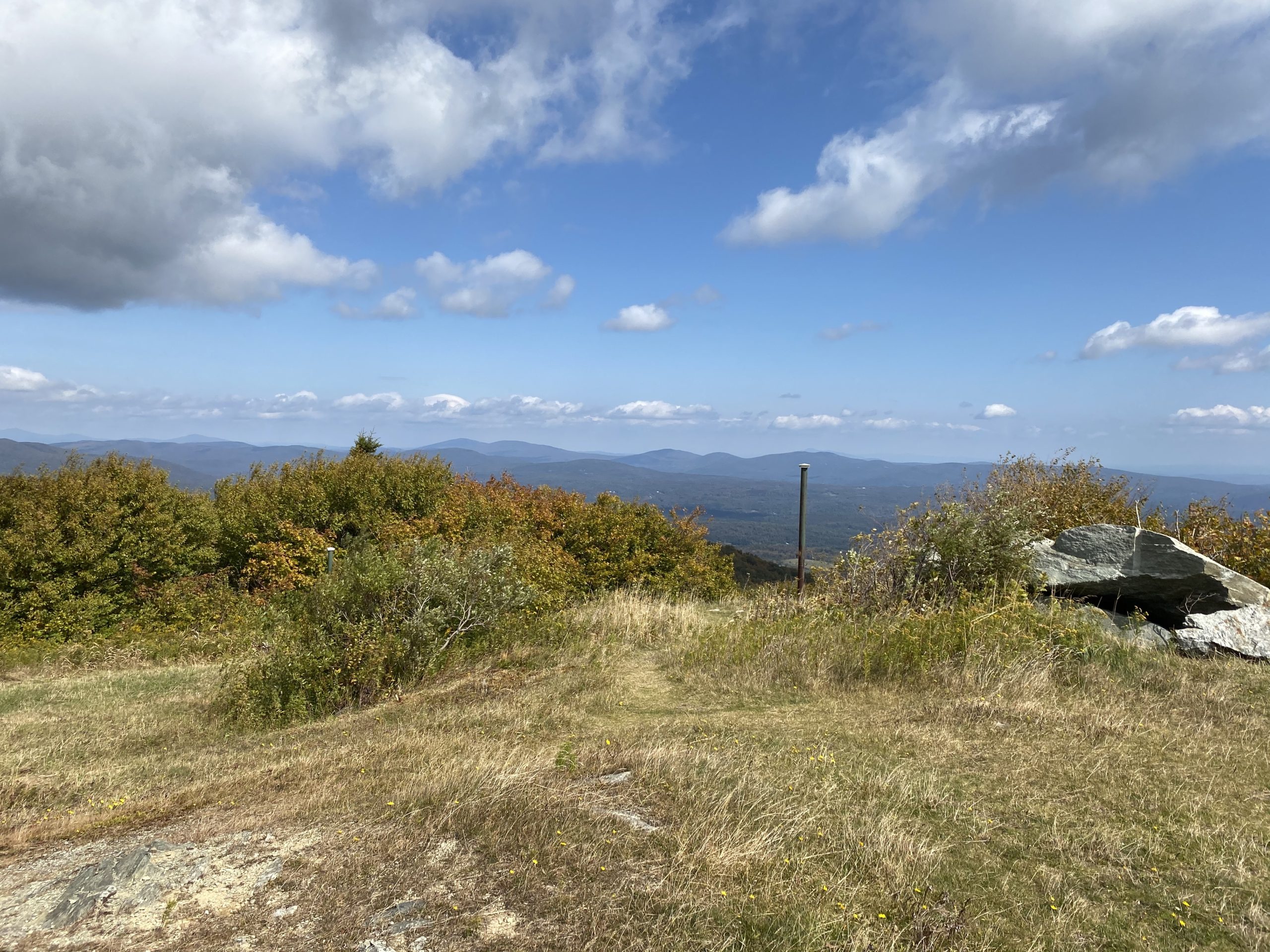 We were running low on water and hoping to see a stream on our way down, despite no water sources being marked on Guthook. Disappointed and thirsty, we headed toward Styles and Peru peaks—our next two climbs—thinking we could make it to the Peru Peak shelter, where we knew there would be water. But right behind the sign that signaled the beginning of the climb sat two totes full of water jugs, courtesy of the Green Mountain Club! It was perfect timing, too, because the next eight or so miles to the shelter were steep. With about a liter of fresh water and a pack of Pop-Tarts in me, I was ready to climb.

This part of the trail was gorgeous. The views at the overlooks were, of course, breathtaking, but so was the foliage on the trail. It really felt like we were walking inside a giant terrarium, or in a forest from a fantasy novel. Bright green moss, orange mushrooms, spruce trees galore, and hand-hewn logs crafted into bog boards to walk on; the whole thing was picturesque. I was dreading the descent, but thanks to my new favorite pieces of gear (thanks, Walgreens!) it actually wasn’t so bad. We made it to Peru Peak shelter with daylight to spare. 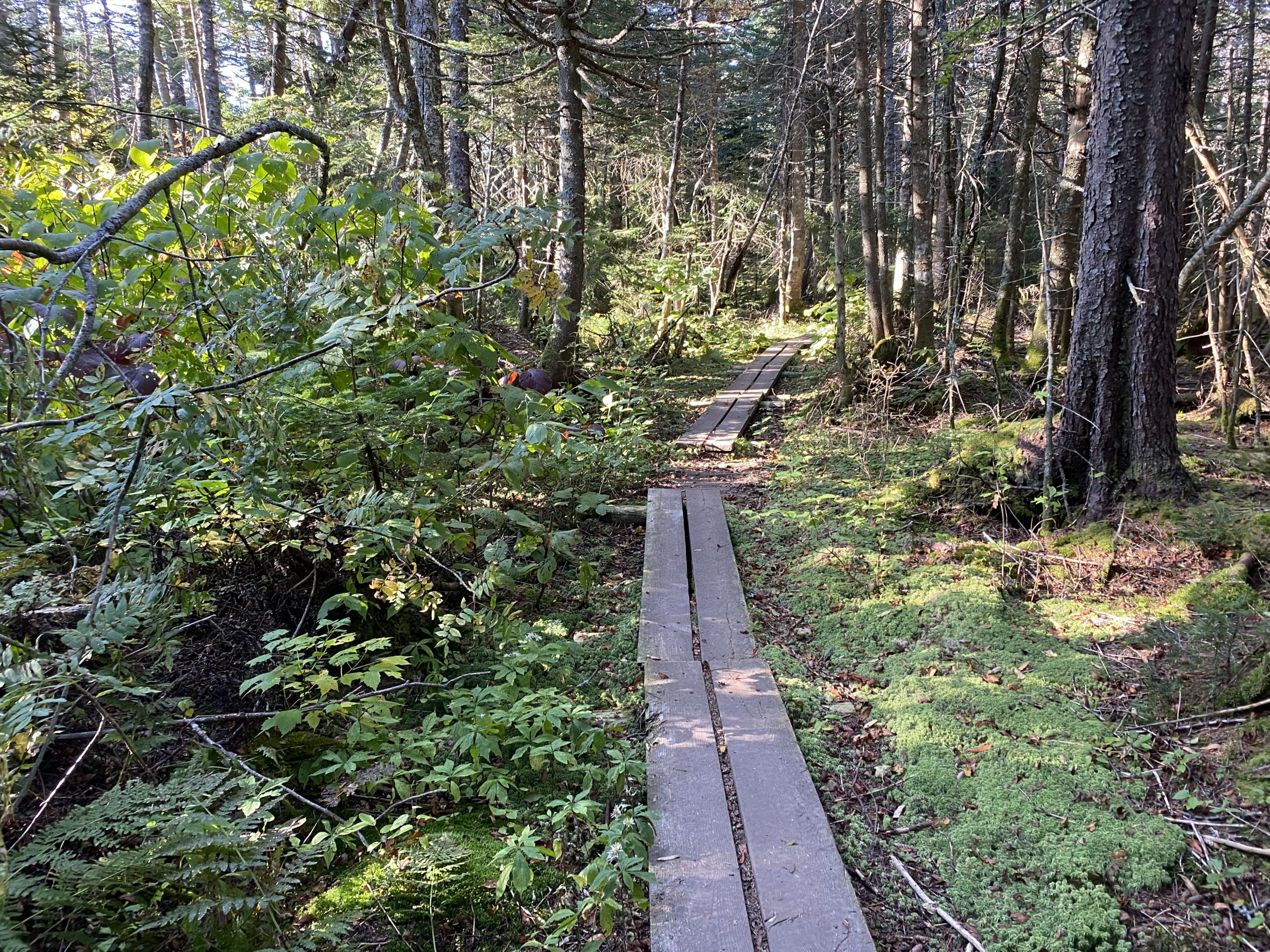 On the way down Peru Peak.

I'm Jamie, trail name Ivy, and I'm stoked to join the long distance backpacking world after years of listening to podcasts, doing trail maintenance, lurking in backpacking forums, and planning epic trips in my head. I live in Manhattan, and when I'm not out on weekend hiking trips, I like lifting heavy sh*t with my gym buddies and following it up with bottomless brunch. Read about my September, 2020 hike on the southern portion of Vermont's Long Trail while I prepare to conquer the north next year!